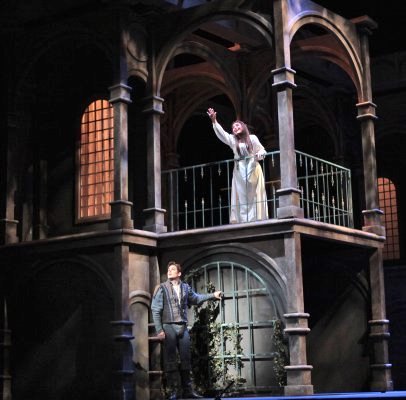 Conductor Karen Keltner emphasized the score’s abundant lyricism. Several cuts in the opera were made. The formulaic French ballets, imposed on all grand opera composers for most 19th century performances in Paris, are usually cut in American performances, as “Romeo’s” ballet was here. Keltner observed most of the other traditional performance cuts, including the nuptial procession, not found in the Bard’s play. Also missing was the brief choral prologue that follows the overture.

Although my personal preference usually sides with performing the composer’s original music, rather than observing the traditional cuts, the resulting San Diego Opera production caught the fast-paced spirit of this French adaptation by Gounod and his brilliant librettist, Jules Barbier, of the Bard’s great masterpiece. San Diego heard the opera generally in the form it has been performed from its earliest days.

As the opera regains popularity, after the last few decades of relative neglect, some of the missing passages should be restored. However, the music that remained assured an evening filled with beautifully passionate music, expressing intense love and hate, brilliantly sung and acted by a uniformly outstanding cast.

The cheerful waltz melody that signifies the Capulet’s masked ball is danced by eight members of the ballet as the chorus sang of the evening’s joyful pleasures.

[Below: the ball at Capulet’s mansion; edited image, based on a Ken Howard photograph, courtesy of the San Diego Opera.] 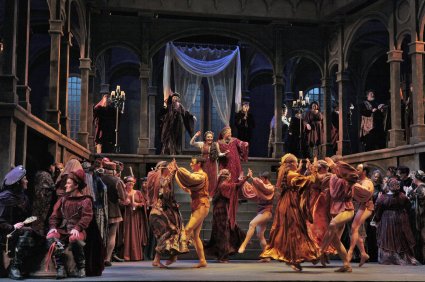 The production, from the Utah Opera, is a unit set, designed by Eric Fielding. It contains several features, including walls, windows and the features that ascend or descend to and from above the stage, to quickly create scene changes. Cynthia Stokes was the stage director.

No sooner has Count Capulet (sung by San Diego Opera’s valuable comprimario artist, Scott Sikon) greeted first Juliet and then his guests, and the waltz refrain is heard for its fifth time. then a descending façade of curtained windows takes us to the street outside of the Capulet’s mansion.

There in the street, a group of the enemy Montague boys have assembled. After Mercutio (impressively perfomed by David Adam Moore, also making a San Diego Opera debut) sings his “Queen Mab” aria, the wall separating them from the Capulets’ ball ascends and Romeo and his Montague cousins jump over a wall to crash the party.

The flexibility of the set design permitted the ensuing scene between Gertrude the Nurse (Suzanna Guzman) and Juliet to take place in a separate room. On this occasion, Pérez drew the first sustained ovation from the enthusiastic San Diego Opera audience with her showpiece arietta, Je veux vivre dans le reve.

The masked Romeo sees Juliet for the first time, and engages her in a formal dance with pairs of the ballet dancers, as he sings the madrigal Ange adorable. It is clear that they become attracted to each other.

But Juliet’s cousin Tybalt (Joel Sorensen) recognizes Romeo’s voice and denounces him to Juliet’s dismay, invoking the Capulets to obtain vengeance for the insult to Capulet honor that Tybalt perceives.

[Below, from left to right: Capulet (Scott Sikon) stands with his relatives Gregorio (Malcolm MacKenzie) and Tybalt (Joel Sorensen) and his choice for Juliet’s husband, Count Paris (Paul Hindemith); edited image, based on a Ken Howard photograph, courtesy of the San Diego Opera.] 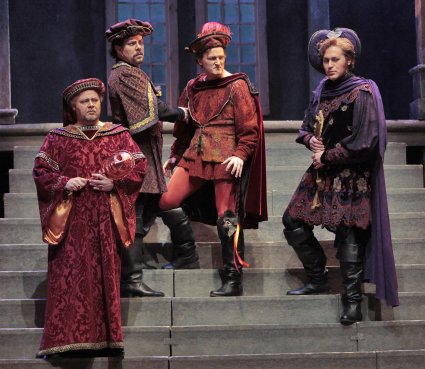 In the next scene, after Mercutio provides Romeo with a ladder to get into Juliet’s garden, the famous “balcony scene” translates into one of the highlights of 19th century French opera. Costello sang Romeo’s great aria Ah! levetoi, soleil! with elegance and soulfulness, to the predictable audience ovation. With a Barbier libretto, romance moves along at a rapid clip, and Pérez’ Juliet makes it clear that she wants to move their relationship to new levels of intensity.

[Below: at her balcony, Juliet (Ailyn Pérez) expresses her determination to become the lover and wife of Romeo (Stephen Costello); edited image, based on a Ken Howard photograph, courtesy of the San Diego Opera.] 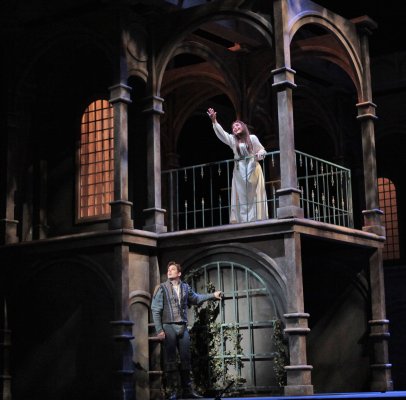 They arrange an embrace in the courtyard below, in a duet in which their voices blend beautifully.

[Below: Romeo (Stephen Costello) and Juliet (Ailyn Pérez) have their first moments together alone in her courtyard; edited image, based on a Ken Howard photograph, courtesy of the San Diego Opera.] 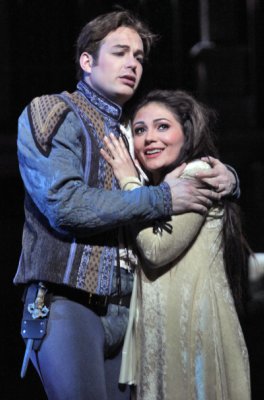 Since passions are running deep, they seek the support and blessing of Friar Laurence, the cleric that has open communications with both of the warring families, for their love affair. The production accommodates them by the Capulet’s courtyard transforming into Laurence’s religious cell, with the aid of cypress trees disappearing into the air and a church wall descending from above.

After Romeo briefs Friar Laurence (the veteran basso Kevin Langan, sounding wonderfully) on the fast-moving scene, the Nurse brings in Juliet. Laurence effects both their marriage and the Church’s sanction for their love.

[Below: Friar Laurence (Kevin Langan) performs the marriage of Romeo (Stephen Costello) and Juliet (Ailyn Pérez), who kneel at a prie-dieu; edited image, based on a Ken Howard photograph, courtesy of the San Diego Opera.] 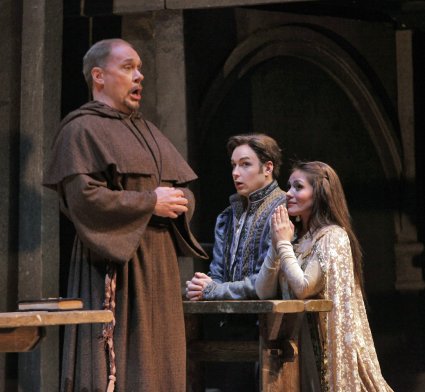 Obviously, the succession of duets between Romeo and Juliet are a highlight of the opera, but another feature that is equally effective are the larger ensembles, such as the quartet between the lovers and the Nurse and Friar, O pur bonheur, that ends this scene.

The next scene has one of the great human themes – the consequences that may well arise when a lover, determined to be a peacemaker, is branded by both friends and foes as a coward. The deaths of Mercutio and Tybalt are the consequences of emotionally volatile young men exercising anger management through the means of sword fighting (expertly choreographed by a nationally recognized Fight Director, Dale Anthony Girard).

Romeo’s banishment by the Duke of Verona (sung and sensitively acted by Philip Skinner in yet another excellent comprimario assignment by this veteran bass-baritone), leads to the grand ensemble, O jour de Deuil, o jour de larmes!

[Below: Mercutio (David Adam Moore, left center  foreground) is restrained by Romeo (Stephen Costello) who is threatened by Tybalt (Joel Sorensen, in red, right center foreground); edited image, based on a Ken Howard photograph, courtesy of the San Diego Opera.] 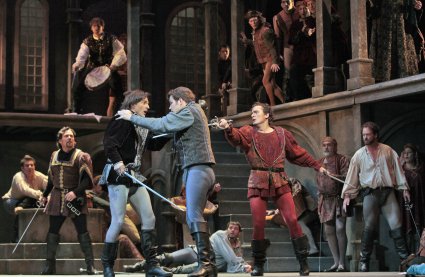 There are two more extended scenes between the lovers. One of the most celebrated passages represents their honeymoon evening, in which they debate whether they are hearing the song of the nightingale of the evening or the lark of the sunrise.

[Below: Romeo (Stephen Costello) embraces Juliet (Ailyn Pérez) before he begins his exile; edited image, based on a Ken Howard photograph, courtesy of the San Diego Opera.] 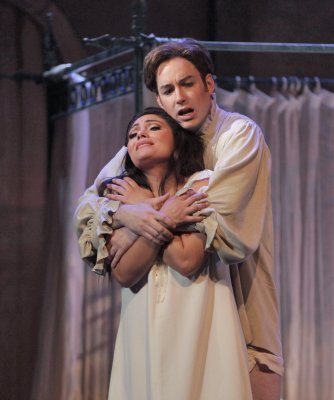 Although the Bard permitted Romeo to die before Juliet awoke from her sleep of death, it seems unlikely that any opera composer would write a death scene without a final duet between the pair, and, of course, Gounod’s is arguably the best.

Beyond their beautiful singing, Costello and Perez look and act their roles. Pérez’ Juliet and Costello’s Romeo are believable as adolescents consumed in the passion of love.  Their supporting cast of David Adam Moore (Mercutio),  Joel Sorensen (Tybalt), Malcolm MacKenzie (Gregorio) and Joseph Hu (Benvolio), seemed just right for their  hotheaded cousins consumed in the hatreds derived from  a feud lasting generations.

The San Diego Opera production advances the cause of this opera, and is strongly recommended.