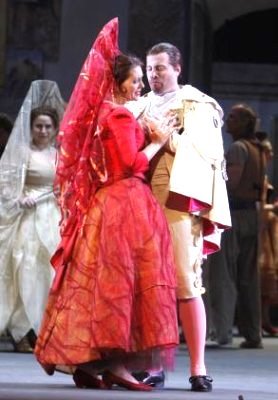 Note from William: Over the past several months, I have posted occasional interviews with opera singers and other artists, whose careers are obviously in their ascendancy, reflecting worldwide interest in securing their talents for future opera seasons. The current interview is with Raymond Aceto, the basso cantante graduate of the Metropolitan Opera Company’s Lindemann Young Artists Development Program.  I interviewed him last month in Houston singing Baron Scarpia in the new Houston Grand Opera production of Puccini’s “Tosca” and again last week in San Diego, where he sang Zaccaria in Verdi’s “Nabucco” for the San Diego Opera.  The “Houston” half of the interview is published here. The remainder will be posted at a later date.

RA: It’s a funny answer. I grew up in Brunswick Ohio, outside of Cleveland. I went to Brunswick High School, where I  was in the band and choir and also sang in a rock band. I have a collection of guitars. I determined that I would pursue music in college.

[Below: Basso Cantante Raymond Aceto; edited image, based on a Dan Rest photograph, courtesy of the Lyric Opera of Chicago.] 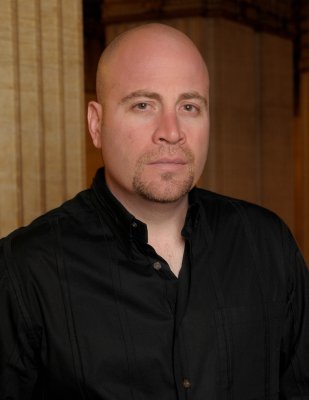 I was admitted to the Bowling Green State University (near Toledo) and took the music courses. There, I had  a wonderful voice teacher, Andreas Poulimenos, who helped me discover that I  have more voice than I thought I had. Bowling Green offers extensive training in both music and the performing arts.  I switched into a performance major and fell in love with the idea of operatic performance. I was then accepted into the Metropolitan Opera’s Lindemann Young Artists Development Program.

Wm: When did you establish that you are a basso?

RA: It was obvious as soon as my voice changed. When I was 13 and 14, I was singing lead vocals in a rock music band. However, at age 15, I was relegated to singing backup vocals. Bassos do not sing lead vocals in rock bands.

Wm. Possibly to the annoyance of some baritones with empty weeks in their schedules, you continue to perform not only Scarpia but Escamillo as well. For a role that has such familiar music, Escamillo has always seemed to me to be a tricky role to sing. Obviously, you believe the role lies in your voice. Do you believe that having a voice that lies lower than most baritones brings advantages to singing Escamillo?

RA: Escamillo’s part has a high tessitura, but also much of it lies low. A lot of baritones handle the high parts well, but cannot make the low sections of, say, the Toreador Song, sound good. A basso who has the ability to negotiate the top, can, in my opinion, get better coverage of the role throughout its range.

[Below: Escamillo (Raymond Aceto) has become the new lover of Carmen (Victoria Vizin); edited image, based on a Robert Millard photograph, courtesy of the Los Angeles Opera.] 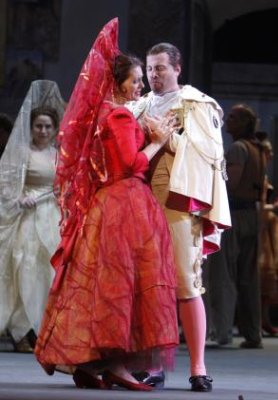 Wm. With the Puccini sesquicentennial behind us and casting for operas during the Wagner and Verdi bicentennials currently in progress, you have amassed a significant repertory of roles for all three composers. To begin with Puccini, you have sung smaller basso roles in “Tosca”, but there are relatively few bassos historically that have assayed the role of Scarpia. Were you inspired on those occasions when you sang those comprimario roles in “Tosca” to consider Scarpia as a future role? What attracts you to the part?

RA: I have been attracted to the role of Scarpia since I was 17 or 18. I always thought it was a great role, I studied it and always wanted to sing it. Conductor Patrick Summers approached me in 2006 when I was performing the role of Fiesco in Verdi’s “Simon Boccanegra” in Houston.

[Below: Fiesco Grimaldi (Raymond Aceto, left) threatens the life of Boccanegra, the pirate, (Dmitri Hvorostovsky) in the 2006 Houston Grand Opera production of Verdi’s “Simon Boccanegra”; edited image, based on a Brett Coomer photograph, courtesy of the Houston Grand Opera.] 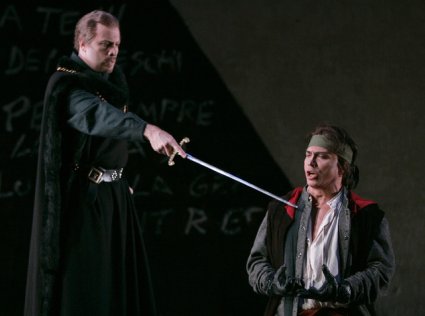 I love singing Puccini, but he did not write that much for the basso voice. I do sing Timur in “Turandot” and  Colline in “La Boheme”. I love these roles, but none of these are as satisfying as performing Scarpia. It is an intense, driven role. It suits my personality. I love the challenge, the danger, the intensity.

I think it can be a role that can sound wonderfully sung by a lower voice. It does take a great deal of technique and skill to get through the singing. Some baritones that I have heard bark some of the passages, but I cannot do that physically or vocally. Since I find Scarpia calculated and sinister, I have a smile on my face masking the calculating demeanor. (For the performance review, see: A New “Tosca” for Houston Grand Opera – January 30, 2010.)

Wm: Although it’s rare to hear a basso cantante sing the role, a few have done so. I saw Giorgio Tozzi perform the role opposite the Tosca of Magda Olivero at San Francisco Opera.

RA: Giorgio Tozzi is one of the basso cantantes I most admire.

Wm. My website reviews have characterized you among the leading basso cantantes of our day. Do you believe that basso cantante describes your voice, even though you also sing Escamillo and Scarpia?

RA: I think basso cantante describes what I am always striving to do. At every point that I am singing, I am driving to produce the most beautiful sound that I can sing.

Wm: As we move into the Verdi bicentennial you are singing such basso roles as Zaccaria, Banquo, Fiesco and Ramfis. Even though you are not particularly associated with the bel canto repertory, it seems possible that Zaccaria could become one of your signature roles. “Nabucco” was an opera that Gaetano Donizetti actually conducted, and of which he very much approved. Does performing Zaccaria appeal to your inner bel canto?

RA: Most definitely. Even though I have been singing Escamillo and Scarpia, I truly do feel my soul and my voice is in bel canto, particularly Verdi. I find nothing so rewarding as a good legato line to make the voice feel right at home for me.

Wm: One can hear how Verdi’s use of the basso sound evolved over his career. Do you as an artist find that you approach singing, say, the role of Zaccaria differently from Fiesco or Ramfis?

RA: Well, I think that Fiesco is written in the same vocal style as some of Zaccaria’s music, whereas Ramfis is declamatory, except for the Temple Scene.

[Below: Raymond Aceto is Zaccaria in San Diego Opera’s production of Verdi’s “Nabucco”; edited image, based on a Cory Weaver photograph, courtesy of the San Diego Opera.] 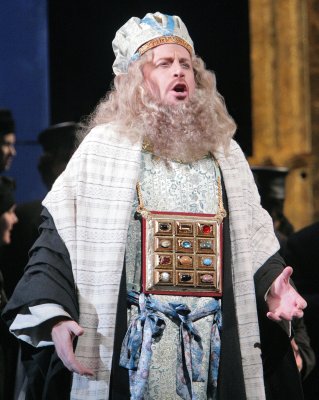 My ultimate Verdi goal is Filippo in “Don Carlo”. Because there are five superstar roles, it is rarely done these days. Once I was the Filippo to Jerome Hines’ Inquisitor. He won by the way.

Wm: You are scheduled to sing Hunding in Francesca Zambello’s production of “Die Walkuere” in San Francisco. In that production, Hunding seems to be a particularly lively part, not the “stand with a spear and sing” stage direction still sometimes seen. In a production such as Zambello’s do you begin to prepare for it in any particular way prior to your arrival in San Francisco for rehearsals?

RA: My preparation for every role is pretty much the same. I am meticulous in preparing the text and music. However, I want to be open to what the conductor and the stage director want from me. Also, I find that I am also influenced by the scenery and costume.

I try not to come in with too preconceived an interpretation. For Scarpia in Houston, I listened to no other singer in that role, wanting to find my own approach to it.

Wm: You have worked with a number of stage directors over your career. Which ones are particularly noteworthy?

RA: I think every opera singer should have the opportunity to work with David McVicar. I have done two myself. David is intense, but highly intelligent and creative. Those who work with him have a tight feel of support and camaraderie. He will get directly into your face one second, then he puts his arm around you the next moment.

[Below: The Comte des Grieux (Raymond Aceto) expresses his concerns to Manon (Natalie Dessay) in David McVicar’s production of Massenet’s “Manon”; edited image, based on a Dan Rest photograph, courtesy of the Lyric Opera of Chicago] 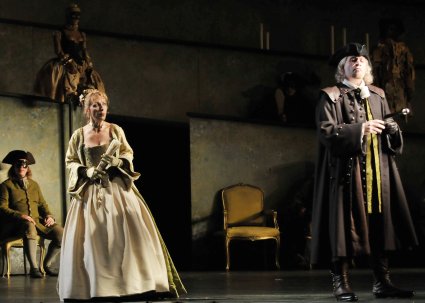 I was the assassin Sparafucile in McVicar’s production of Verdi’s “Rigoletto” at the Royal Opera House Covent Garden in London, and his interpretation emphasizes the considerable debauchery of the characters. I also was in his production of Massenet’s “Manon” at the Lyric Opera in Chicago. (For the performance review, see: Kaufmann Astonishes, Dessay Enraptures, in McVicar “Manon”: Lyric Opera of Chicago – October 15, 2008.)

The production of Puccini’s “Tosca” that I just completed with Director John Caird was wonderful. Caird, who comes to opera from theater and film had a completely fresh perspective on staging the opera. He was so wonderful, so intelligent, so into the whole process. As it turned out all the principals, myself as Scarpia, Patricia Racette as Tosca and Alexei Dolgov as Cavaradossi were each performing the role for the first time. We all took great pains to be as good actors as we could be.

Besides McVicar and Caird, I was impressed working with Franco Zeffirelli, and also enjoyed Christopher Alden staging Verdi’s “Aida”. It is always a great experience to work with a great director personally. Unfortunately, many of the productions are revivals or remounts and one ends up with assistants without the ability to approach the production as creatively as the person who conceptualized the production.

However, an opera singer has to stay focused  when they move from opera house to opera house into a variety of productions.

Wm: And which conductors do you look forward to working with?

RA: There are so many I like working with. I have worked a lot with Patrick Summers, and appreciate his sensibility, his accuracy and support. I like to work a lot with Nicola Luisotti. (We call each the bass brothers, because both of us have low-pitched speaking voices.) I have found both Emmanuel Villaume and  Stephen Lord to be very close supporters of mine. Another conductor who is sensitive to the needs of singers is Marco Armiliato.

Wm: I understand that the first “Tosca” of your career was an especially memorable experience.

RA: Yes, as a 23 year old, I played the Jailer in “Tosca’s” third act. Luciano Pavarotti was the Cavaradossi. In my whole life., he is the best voice I have ever heard. One day, as I was standing in the wings, Pavarotti said to me “beautiful voice, have a good time”. Then, after I sang the Jailer’s words, I had to cross the stage in front of him to exit, and Luciano said “bravo”. It was amazing.

Wm: Besides Pavarotti, which artists do you admire?

RA: I have worked with Bryn Terfel, Susan Graham, Placido Domingo, Paul Groves and Renee Fleming. In May, I will celebrate my 20th year performing opera. It has been wonderful working with my friends in the community of bassos. Sam Ramey and I have become very good friends, and so it is also with James Morris. Ramey and Morris have established their presence in the generation before me, and there are younger guys than me who will do their thing. I have nothing but respect for all of them and their careers.

For the continuation of this interview, see: Rising Stars: An Interview with Raymond Aceto – Part 2.