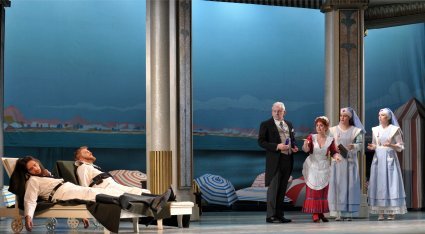 The Dallas Opera presented Mozart’s “Cosi fan Tutte” as their second offering (after Verdi’s “Otello” last fall) in their new Margot and Bill Winspear Opera House. They assembled an excellent cast in the beautiful production conceived by John Cox and his collaborating set and costume designer Robert Perdziola.

The production, owned by the San Francisco Opera, was first presented by the opera company that co-sponsored, with S. F. Opera, the production’s creation – the Opera of Monte Carlo in Monaco.

The premise of the opera, of course, is a wager between an older gentleman and two young men about what betrothed women would do if aggressively courted by other men. Mozart and his librettist, Lorenzo da Ponte, advanced a pessimistic view of this aspect of human relationships, and that view’s dissonance with contemporary moral teachings assured that the opera would disappear from most opera houses throughout the 19th century, and from many houses during the first half of the 20th, as well. (For a discussion of the first year that “Cosi” was ever performed at the San Francisco Opera, see: Cosi Fan Tutte – October 25, 1956.)

In Mozart’s “Abduction from the Seraglio” the pairs of lovers are open to suspicion of their mates’ possible infidelity. In “Cosi” only the agreement among the wagering men that “women, indeed, are like that” and, therefore, that Don Alfonso has won his bet, prevents the situation from getting even further out of hand.

[Below: Guglielmo (Michael Todd Simpson, left) and Ferrando (Brian Anderson, right) make a wager with Don Alfonso (Sir Thomas Allen) on the fidelity of their fiancees; edited image, based on a Karen Almond photograph, courtesy of the Dallas Opera.] 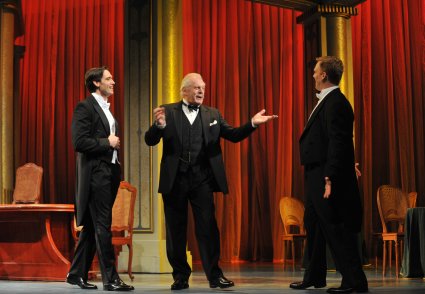 Since the production’s premiere was in Monaco, it seems quite fitting for the production to incorporate the idea of high-end gambling by the upper classes. There was likely another consideration as well. Since the set designer, Robert Perdziola, is one of the most talented of costume designers working today, locating the story in a fashionable, exotic place, such as the Cote d’Azur as near to the Roaring 20s as possible, would unleash his imagination in designing classical haute couture for the women of Mozart’s comedy.

Whether or not Perdziola was influenced in any way by the 1990’s British TV drama about fashion design, “The House of Elliot”, the costumes he designed, and in this cast, that were worn by Liza van den Heever (Fiordiligi) and Jennifer Holloway (Dorabella), are as spectacular as the high fashion dresses that were associated with that series. (Fans of “Elliot” may agree that Holloway’s Dorabella looks strikingly like actress Stella Gonet’s Beatrice Elliot.)

Although Perdziola has constructed a unit set, the use of interior curtains permits scene changes from a small casino with roulette wheel to elegant rooms overlooking a seashore teeming with beach umbrellas that adjoins a boat harbor.

[Below: the sisters Dorabella (Jennifer Holloway, left) and Fiordiligi (Elza van den Heever) enjoy the Cote d’Azur; edited image, based on a Karen Almond photograph, courtesy of the Dallas Opera.] 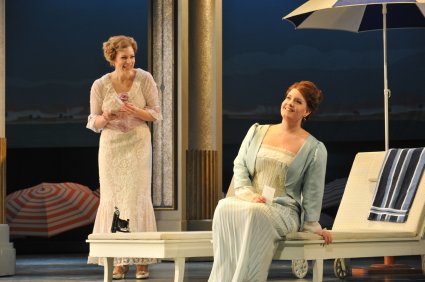 It’s Mozart’s music and da Ponte’s (and Mozart’s) wit, that connects with us in “Cosi”. And it’s Perdziola’s sets and costumes and Cox’ always interesting staging that connects us with this production. British conductor Grahame Jenkins presided over the performance. The swirling overture was brilliantly played by the Dallas Opera orchestra (the Winspear acoustics enhancing the experience).

The first scene introduces us to Sir Thomas Allen’s Don Alfonso, whose solid vocal technique is matched by an impish humor. The two men whose faith in women Alfonso derides, were both effective in their roles. Michael Todd Simpson was an impressive Guglielmo, with a rich, dark lyric baritone. Brian Anderson reflected the practice of casting a leggiero tenor as Ferrando. Anderson, a former San Francisco Opera Center Adler Fellow, showed style and vocal versatility that compensated for a slightly lighter vocal weight than that possessed by his colleagues.

I have been blessed by having seen world class pairings of the siblings Fiordiligi and Dorabella over the years, but was particularly impressed by the combination of van den Heever and Holloway in these roles. Each is a formidable artist, with secure technique and full, creamy voices. Singing together (as Fiordiligi and Dorabella often do, usually an interval of a third apart) they were a striking pair.

Nor did Dallas Opera disappoint on the casting of Despina. Nuccia Focile is one of the world’s most impressive lyric sopranos, and she proved to be a sprightly, arrestingly likeable soubrette.

[Below: Nuccia Focile as Despina; edited image, based on a Karen Almond photograph, courtesy of the Dallas Opera.] 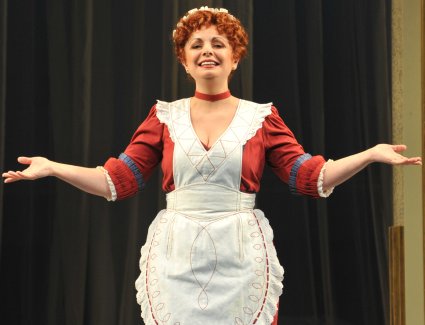 The settings, even if separated in time from us by nearly a century, are glorious and have the sweep of a technicolor movie – so realistic, in fact, that companions demanded that I ( who has defended the plots of such operas as Bellini’s “Norma” or Donizetti’s “Lucrezia Borgia” or Verdi’s “Il Trovatore” or Delibes’ “Lakme” as rather more plausible, if properly staged, than they initially appear) to similarly defend the plot of “Cosi”.

Classical comedies, whether spoken or sung, often require audiences to suspend belief for the gags to work. In “Cosi” we are asked to accept the idea that two soldiers engaged to sisters with whom they apparently constantly double date, could change into the uniform of a foreign country, put on fake facial hair, switch sisters, and, not only get away with it, but would demoralize each other with the proof that  “their women are like that”.

[Below: Dorabella (Jennifer Holloway) begins to find Guglielmo (Michael Todd Simpson), disguised as an Albanian sailor, to be a person who interests her; edited image, based on a Karen Almond photograph, courtesy of the Dallas Opera.] 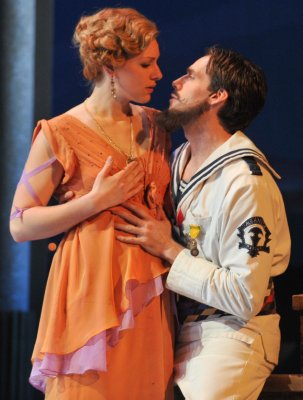 When originally conceived, Cox wanted to weave a subtle antiwar message into an opera that no one ever had associated with wartime. (See my review of a previous mounting: Warhorse Warriors: John Cox’ ‘Cosi Fan Tutte’ in S. F. – July 2, 2005, which includes an extensive discussion of Cox’ work in San Francisco and elsewhere.) In fact, when the men return as themselves in the final scene, they show battlefield injuries and are accompanied by other war veterans, and in the opera’s middle, the two women are enlisted as Red Cross nurses, as the casino resort makes room for the wounded. Such features simultaneously add both to the realism and the surreality of the production. 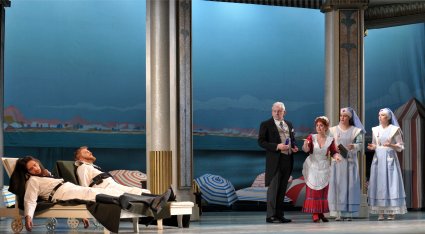 Of course, “Cosi” is not a documentary about human experiences, nor is even a verismo opera (which composer Ferruccio Busoni pointed out is a nonsensical term, since people in real life do not communicate with each other exclusively through song.) Sometimes, confronted with the task of staging improbable behavior, some stage directors will require, or perhaps unleash, their singers to present their characters farcically – providing bizarre and incomprehensible sight gags they hope the audience will like.

John Cox clearly believes that, excepting some latitude for the character of the free spirited maid Despina (Nuccia Focile), none of the “Cosi” characters should be presented with even a hint of farce. In conversations I had with van den Heever, the only one of the six cast members in a role debut, she said that Cox insisted that, regardless of her natural tendency towards energetic movement when on the operatic stage, that  she stand perfectly still and, with great dignity, let the music flow through her character. (See Rising Stars: An Interview with Elza van den Heever.)

[Below: Dorabella (Jennifer Holloway, seated left) and Fiordiligi (Elza van den Heever, seated right) are beginning to like the idea of a little infidelity while their fiancees are away, to the encouragement of Despina (Nuccia Focile, standing left) and Don Alfonso (Sir Thomas Allen.] 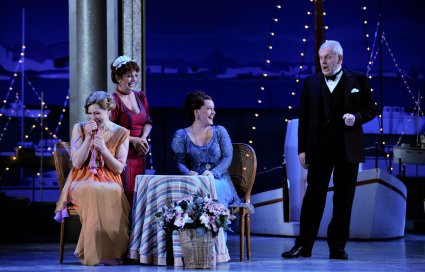 “Cosi” is a succession of glorious Mozartean arias, duets and ensembles. The most famous solo pieces are those for Fiordiligi – the infamous Come Scoglio, from a technical standpoint one of the most taxing of all soprano arias and the serenely beautiful Per pieta, ben mio, which van den Heever points out has all of the technical requirements of Fiordiligi’s first aria, with even greater requirements for breath control and expressiveness. (For my reviews of van den Heever’s performances as Mozart’s Donna Anna, see: Kwiecien Excels in McVicar’s Dark Side “Don Giovanni” – S. F. June 2, 2007 and The Man Who Loved Women: Lucas Meachem’s Empathetic Don Giovanni – Santa Fe, July 31, 2009.)

But Dorabella, Despina, Ferrand0 and Guglielmo all  have two or more beautifully constructed arias each. Holloway’s Smanie implacabili (this being a Cox production, of course played straight) was as affecting as her E amor un ladroncello was light-hearted and amusing. Anderson’s Un aura amorosa was beautifully sung, as were his two later arias, and Simpson’s Guglielmo was impressive throughout the performance.

[Below: Guglielmo (Michael Todd Simpson) as the Albanian sailor dressed for his wedding, delights Ferrando’s fiancee, Dorabella (Jennifer Holloway); edited image, based on a Karen Almond photograph, courtesy of the Dallas Opera.] 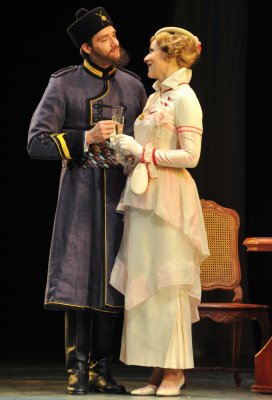 Don Alfonso, even without the kinds of arias the other five possess, provides the grounding and is the center of attention for most of the ten ensembles in which he participates. At this point in Sir Thomas Allen’s career, he brings a lifetime of experience, unfailing musicianship, and a brilliant comic technique, to the mature comic roles in the operatic repertory. (See my review of a recent performance at: Woody Allen’s L. A. “Gianni Schicchi”: Spoofing Italian Films – September 6, 2008.)