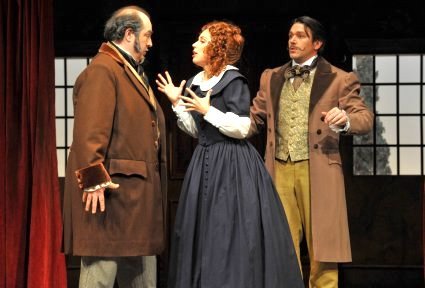 Written for four world-class voices, the Dallas Opera chose a cast that deftly handled Donizetti’s melodious score.  Donato DiStefano, internationally renowned for the basso buffo roles in Rossini and Donizetti operas, is Pasquale. Like DiStefano a master of the tongue-twisting “patter song”, Nathan Gunn is Doctor Malatesta, a role that showcases his comedic skills. Cast as Ernesto, the intended of Kucerova’s Norina, is Norman Shankle.

Ranzani led the Dallas Opera Orchestra in a skillful performance of the overture, testing the superb acoustics of the recently opened Margot and Bill Winspear Opera House.

The Ponnelle sets are based on a “stage within a stage” concept. A proscenium arches over doorways at stage left and right, each with a latticed window above it. Within the area that frames the doorways and proscenium is a large red stage curtain, that opens to reveal three sets:  the interior of Don Pasquale’s house, a rooftop terrace that adjoins Norina’s home, and Pasquale’s garden.

Candace Evans, the stage director, obviously has absorbed the spirit of the piece, as it is defined by Donizetti’s music and Ponnelle’s sets and costumes (with additional set features and costumes created by the Dallas Opera’s technical departments).

Representing Don Pasquale’s house (or at least its imposing entrance hall), we see an upper floor and two descending staircases to the main floor. Marble busts decorate the walls of the upper staircase. An easel holds Ernesto’s latest oil painting. In this permutation, the set represents a drably dignified interior space, reflecting both Pasquale’s taste and lack of appetite for major renovations or other big ticket expenditures. (That is the “before”; Norina will see to the “after” in the next act.)

Adversarial exchanges take place between Pasquale and his artist nephew, Ernesto (impressively sung by Norman Shankle). The latter refuses to marry the woman of property whom the Don believes to be a better choice than Ernesto’s chosen Norina, so Pasquale announces his intention for himself to remarry and thus to disinherit his nephew. But Malatesta already has developed a strategy to intervene in this generational impasse. Without informing Ernesto, Malatesta offers Pasquale his sister Sophronia (whom Pasquale knows to be a student at a convent) to become his new bride, then proceeds to convince Norina to masquerade as that sibling.

The second scene, taking place on Norina’s terrace, was the first opportunity for American audiences to hear Kucerova, who has had great success in the comic coloratura and light lyric soprano roles in Europe. She proved the indomitable wily vixen in Quel guardo, il cavalier, heralding an important new singing actress in the bel canto repertory.

Kucerova’s Norina quickly enters into the conspiracy with Gunn’s Malatesta. In this production John Sauvey plays Malatesta’s cousin, who will be the fake Notary that produces the fake documents that convinces Pasquale he has actually married Sophronia. The would-be Notary has accompanied Malatesta to Norina’s home, as a mute character in this scene.

[Below: Norina (Adriana Kucerova) agrees to a scheme devised by Doctor Malatesta (Nathan Gunn); edited image, based on a Karen Almond photograph, courtesy of the Dallas Opera.] 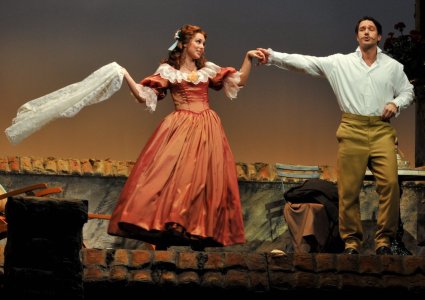 (Were anything like this to transpire in my home state of California in the present day, Norina, Malatesta and his cousin all would become entangled in the State’s conspiracy to defraud and elder abuse laws, but, of course, Malatesta explains that all of this is merely to show Pasquale what can happen when a wealthy, elderly man takes on a young gold-digging wife, rather than engaging in proper estate planning with his legal heir).

Norina is a quintessential soubrette role, and is a stock character of the comic stage, whether that character’s lines are spoken or sung. But imbued with the sophisticated vocal line of the mature Donizetti, the role glistens in the hand of a singing actress with the charm, comic timing and physical attractiveness that Kucerova personifies.

Similarly, Pasquale is a prototypical basso buffo role, but one with a streak of likeability and charm, beneath that impulsive decision to teach his disobedient nephew a lesson. It is a plum role for the veteran basso with comedic skills, able to sing the rapid Italian chatter expected of a buffo. To this role, DiStefano brings a rich, deep voice, and his masterful bel canto phrasing.

[Below: Don Pasquale (Donato DiStefano, left) is charmed by the seemingly demure, obedient and frugal Sophronia (Adriana Kucerova), introduced to him as the sister of Doctor Malatesta (Nathan Gunn); edited image, based on a Karen Almond photograph, courtesy of the Dallas Opera.] 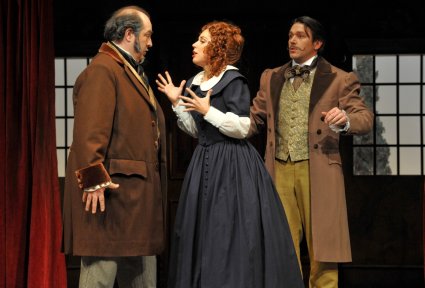 The core of the plot revolves around Sophronia/Norina’s change from penurious sweet young thing to spendthrift termagant the instant that both she and Pasquale sign the marriage contract. The drab household is instantly placed into the hands of decorators with instructions that no expense be spared. In addition, Pasquale’s existing staff of three servants is augmented by dozens of additional employees, including coachmen with teams of horses. This production’s Sophronia becomes an art patron as well, and Ernesto’s paintings become a prominent decorative touch.

[Below: a large staff is now required for Don Pasquale’s home to complement Sophronia’s expensive decorative enhancements; edited image, based on a Karen Almond photograph, courtesy of the Dallas Opera.] 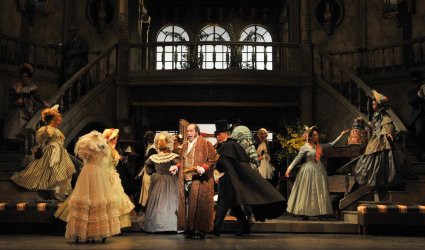 However, the most destructive element to Pasquale’s ego is Sophronia’s rejection of Don Pasquale as the head of household or even as a person, including her professed intention to have Pasquale’s nephew Ernesto, rather than Pasquale, accompany her on the nightly party  and theater circuit. When he tries to put his foot down, she slaps him. No place in comic opera does a buffo character engender such audience sympathy than the crestfallen, emotionally defeated Pasquale does at this point.

[Below: Norina as Sophronia (Adriana Kucerova) announces her determination to do whatever she pleases, regardless of the emotional impact on Don Pasquale (Donato DiStefano); edited image, based on a Karen Almond photograph, courtesy of the Dallas Opera.] 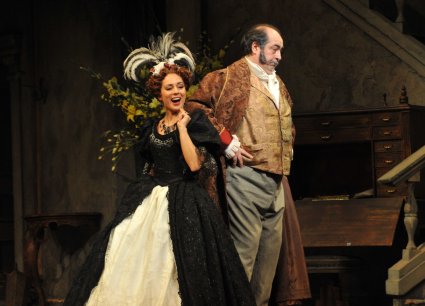 But for all to be set right, there is one more seeming outrage meted out to the Don’s persona. Sophronia deliberately drops a note that seems to implicate her in an affair with another man in Pasquale’s garden that evening. This sets up one of the most famous and most hilarious buffo duets in all of opera – Cheti, cheti, immantimente between Pasquale and Malatesta (staged in this production before the red curtain).  DiStefano and Gunn received the evening’s greatest applause for this tour de force. Audience approval of the raucous duet invariably occurs in “Don Pasquale” performances, but there was special justification for this superb pair’s dueling patter.

If the opera were to end there, it would have been a evening filled with invariably melodious music, including two beautiful arias for Ernesto, the second of which is preceded by a hauntingly beautiful trumpet solo. But the opera moves into a third act, with Ernesto’s third aria, the enchanting serenade Com’e gentil, with its barcarole rhythms.

The part of Ernesto spends more time in the upper third of a tenor’s range than any other Italian opera in the standard repertory. Shankle, a former San Francisco Opera Adler Fellow, was impressive in his handling of the aria’s treacherous tessitura. (Curiously, the Dallas Opera audience seemed not to know where the aria ended, so the traditional break for applause was not observed, and Shankle’s Ernesto and Kucerova’s Norina went immediately into the divine duet Tornami dir che m’ami.)

Prior to the opera’s happy denouement, there is the set-up for a situation that could have ended much differently if the opera, rather than being a romantic comedy, were a verismo tragedy like Leoncavallo’s “I Pagliacci” a half-century later. Two men, one of whom is married, come upon that husband’s wife with a lover, and the lover escapes.

But in this opera all’s well that ends well. Pasquale follows Malatesta’s plan to disentangle himself from his horrid nuptial mistake. He becomes reconciled with his nephew Ernesto’s marriage to Norina (whom he thinks he has not yet met), and even promises the happy couple a generous income and a bountiful future inheritance. And, even when the fraud has been admitted, he has been so frightened at the unintended consequences of his previous marital decision, that he concedes that sometimes fraud is justifiable.

[Below: Ernesto (Norman Shankle) marries his beloved Norina (Adriana Kucerova); edited image, based on a Karen Almond photograph, courtesy of the Dallas Opera.] 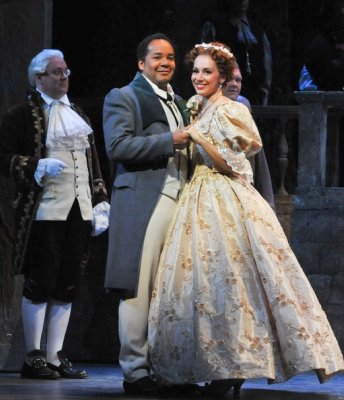 This is a wonderful opera for both the veteran aficionado, who will delight in the performances of DiStefano, Kucerova, Gunn and Shankle, and the newcomer to opera, seeking sprightly, melodious music encased in a story that is fun to watch. The Dallas Opera has produced a great “Don Pasquale”.

For a review of a less successful performance of this opera, see: No Norina: A “Don Pasquale” Showstopper in Zurich – September 23, 2007