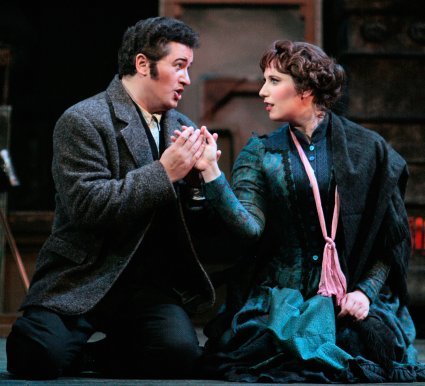 Is there anyone out there in the world of opera who doesn’t adore Puccini’s super-popular “La Boheme”? Who doesn’t dab at tears at the end when Mimi dies in Rodolfo’s arms? This is opera verisma (opera in the Real World) at its absolute best! And how do you top Act II’s rollicking Cafe’ Momus Christmas Eve scene for sheer delight.

[Below: A Paris Christmas eve; the second act sets for “La Boheme”, edited image, based on a Cory Weaver photograph, courtesy of the San Diego Opera.] 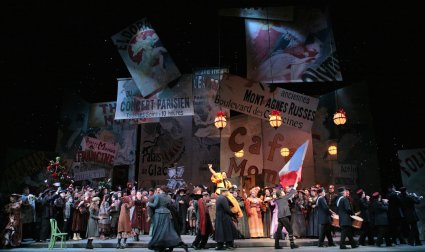 San Diego Opera opened its 2010 International Season with this sublime masterpiece – but the 2010 Season itself is a masterpiece of opera selections featuring Verdi’s majestic, epochal “Nabucco”, the lushly passionate love-in of Gounod’s “Romeo and Juliet”, and ending with Verdi’s sensational “La Traviata”.

Tying together this Season (dubbed The Season of Desire), the heroines in three of these operas share their destiny in common. In each, the heroine expires at the end in dramatically overwhelming dramatic pathos in the arms of her lover. This Season ends with “La Traviata” as our heroine collapses after singing with her lover in perhaps the most riveting final duet in all Italian opera as the curtain falls on this wondrous opera – and the 2010 San Diego Season. Lots to look forward to indeed – particularly in a season short one opera due to the tough economy out there in the Real World – but not short on quality!

Thirty-five years ago the San Diego Opera launched itself as an opera company with “La Boheme”, repeating it in 1968, then in 1975 bringing this glorious crowd-pleaser back every five years since then. Many luminaries in the opera world have graced San Diego Opera’s stage in these productions – certainly in 1980 with the late, great Luciano Pavarotti as Rodolfo (a performance I saw!). 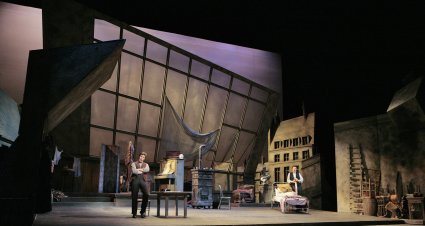 The wonderful scene/sets/ambience/atmosphere of this production is the work of San Diego Opera veteran (with some 12 productions since 1980) John Conklin. He is no newcomer in designing stage smash-hits not just here but in San Francisco, Santa Fe, the Met, Washington National Opera, English National Opera, Chicago Lyric Opera, et al, etc. This is a very traditional, very comfortable overview of this cherished-by-all piece.

[Below: the Bohemians in conversation, with Schaunard (Malcolm MacKenzie) standing and, seated from left, Rodolfo (Piotr Beczala), Marcello (Jeff Matsey) and Colline (Alfred Walker), edited image, based on a Cory Weaver photograph, courtesy of the San Diego Opera.] 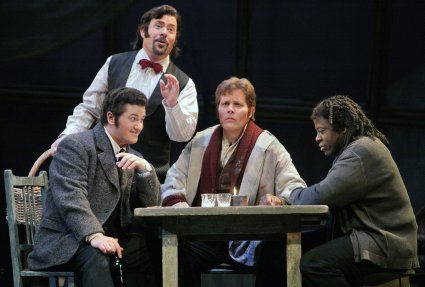 Without any doubt, Polish tenor Piotr Beczala was the MVP in this brilliant, sparkling production as Rodolfo – not acting the role, but living it – creamy, silken smooth, utterly effortless, tear-jerking singing sending chills up my spine and the audience to their feet at final curtain call. All of us who have grown up in the joy of the greatest (and expensive) show on Earth – opera – were very much aware of seeing a rising super-star!!

Living (again not playing) the all-important role of Mimi was Ellie Dehn – like Beczala making her house debut here – who arrives on the scene as Act 1 reaches its climax knocking at the door, losing her key. Dehn came off as one of the most demure, feminine, shy, arresting Mimis that I’ve seen (not telling the world how great she is) presenting rich, resonant, soaring notes very much up to the splendor of Piotr Beczala.

Ellie Dehn replaced the orginally scheduled Anja Harteros, came with experience as Musetta at the Met and Freia in the Los Angeles Opera production of Wagner’s “Das Rheingold”, and will be the Countess in the forthcoming San Francisco Opera production of Mozart’s “Marriage of Figaro”.

[Below: Rodolfo (Piotr Beczala) warms the hands of Mimi (Ellie Dehn); edited image, based on a photograph, courtesy of the San Diego Opera.] 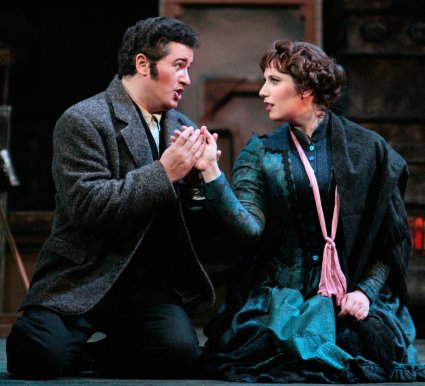 Most particularly lush, colorful and terrific was the Act II Cafe’ Momus scene for sheer operatic joy. The Act opened with the stage crammed – jugglers, musicians, kids, cops, all the town out in Paris on Christmas Eve with huge, spectacular posters of the fabled Moulin Rouge show-posters by French artist extraordinaire Toulouse Lautrec forming the background (San Diego Museum of Art features a giant retrospective of his work later this year).

The Musetta – fabulously presented by Priti Gandhi who lives part-time next door in Del Mar – stole this act. Dressed in a stunning, bright-yellow show-stopper gitup, she dominated the act all the way to the end when the French tricolor is marched out to the cheering mob scene when it ends with Musetta’s portly, antique, top-hat sporting sugar-daddy, Alcindoro (Scott Sikon), being stuck with the bill for the bohemian frolic to the roaring delight of the audience. Bluntly,  I know of no Act in all Italian opera more festively joyous than this!!

[Below: Musetta (Priti Gandhi) is carried on the shoulders of  Colline (Alfred Walker, left) and Schaunard (Malcolm MacKenzie) as Marcello (Jeff Mattsey) follows; edited image, based on a photograph, courtesy of the San Diego Opera.] 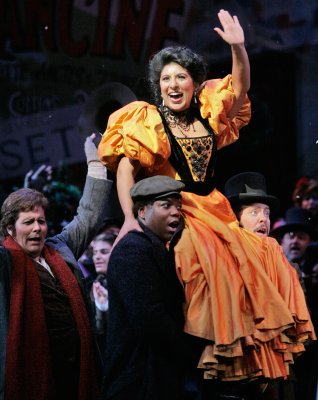 The evening’s Marcello was Jeff Mattsey, whose San Diego Opera debut had been in 1995 in the other Bohemian baritone role of Schaunard. Filling out this cast in the delicious, fun roles, are Matthew MacKenzie (Zurga in San Diego Opera’s 2008 production of Bizet’s “Pearl Fishers” and Sharpless in Puccini’s “Madama Butterfly” in 2009, both performances reviewed on this website) as Schaunard, and  Alfred Walker as Colline. Walker debuted here in 2006 in the marvellous production of Handel’s “Julius Caesar” (I go for Baroque .   .   . ), who was Porgy in L. A. ‘s wonderful production of Gershwin’s “Porgy and Bess”.

Our Musetta, Priti Gandhi, has appeared here in Mozart’s “Magic Flute”, Verdi’s “Otello” and “Aida”, and most recently, in last season’s gritty (and fabulous) showing of Britten’s “Peter Grimes”. She was also seen recently in the Los Angeles Opera production of Weill’s “Rise and Fall of the City of Mahagonny” (now available on a terrific L. A. Opera DVD).

[Below: Alcindoro (Scott Sikon, left) is annoyed that his mistress, Musetta (Priti Gandhi) is carrying on a raucous conversation with her former lover Marcello (Jeff Mattsey) at the next table; edited image, based on a photograph, courtesy of the San Diego Opera.] 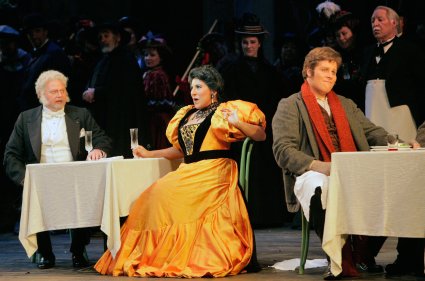 E. Loren Meeker made her San Diego Opera stage director debut. But she is hardly a rookie here, having been Assistant Director at San Diego Opera between 2005 and 2007, and  with similar staffing assignments at Chicago Lyric Opera and Houston Grand Opera.

Presiding over the orchestra with distinction was Conductor Karen Keltner, whose spirited performance  won tumultuous applause at opera’s end.

We’ve all seen many reviews of “La Boheme”, but one of the most famous – and my favorite – is that by Puccini’s long-time publisher G Ricordi – collaborator, critic, helper, etc who worked with Puccini in the three years of “La Boheme’s” gestation as well as Puccini’s prior operas, writing, “Dear Puccini, if this time you have not succeeded in hitting the nail squarely on the head, I will change my profession and sell salami.”  No, he  didn’t change professions .   .     .  !!

[Below: the lovers Mimi (Ellie Dehn) and Rodolfo (Piotr Beczala), reconciled at the end of Act III, leave together; edited image, based on a Cory Weaver photograph, courtesy of the San Diego Opera.] 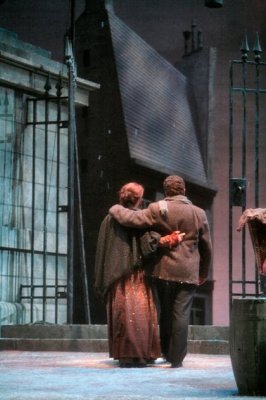 This Trio – Beczala, Dehn and Gandhi – were nothing short of fabulous. What a Season starter!!