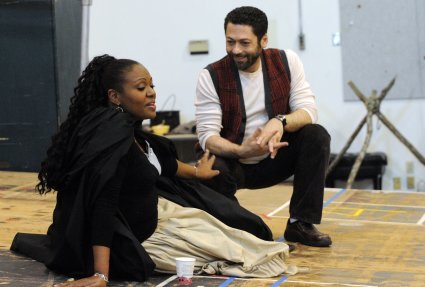 [Note from William: As part of my “Rising Stars” series of interviews of major new talents in the field of opera, I conducted an interview with stage director José Maria Condemi.]

Wm: For the Seattle Opera “Trovatore” you are utilizing Allen Moyer’s sets from the Minnesota Opera and John Conklin’s costumes from a previous Seattle Opera production. Since sets and costumes are from different productions, it is evident that you as stage director are being asked to do more than simply follow the “book” of an established production, even though you are not working on a new production from the ground up.

Can you give a timeline of how you approached this production? Did you start with pictures of the physical sets?

JMC: I worked on Seattle’s previous production when it was mounted in San Francisco. I enjoyed it a lot, but I am biased because I was working on the production. Insiders can lose perspective on how it translates to the audience and how the audience reacts.

[Below: José Maria Condemi; image based on a copyrighted Bill Mohn photograph courtesy of the Seattle Opera.] 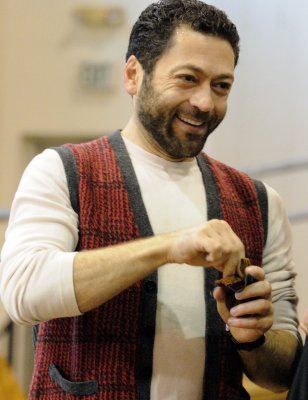 As a result of the economic forces, an interesting new trend has emerged. Because companies find the cost of mounting new productions beyond their budgets, increasing numbers of “hybrid” stagings are being mounted.  One starts with a usable set, but there may be a set of costumes not associated originally designed for it. Thus, say, Donizetti’s “Lucia di Lammermoor” might be performed with elements that were originally designed for other productions.

Stage directors always like to have a free rein, and new productions. But I find this other approach – utilizing existing sets and costumes for different purposes than originally conceived – to be challenging and, to me, equally exciting.

Consider, for example, the Lyric Opera production of Gounod’s “Faust” in Chicago. Robert Perdziola’s set designs are very interesting and seem very appropriate to the opera. But, when I discussed the “Faust” with Perdziola, he said that originally, the sets were not conceived for “Faust” at all, but for a Rossini opera. Only at the last minute was it adapted for “Faust” instead.

[Below: the Kermesse scene in Robert Perdziola’s sets and costumes for Gounod’s “Faust”‘; edited image, based on a Dan Rest photograph, courtesy of Lyric Opera of Chicago.] 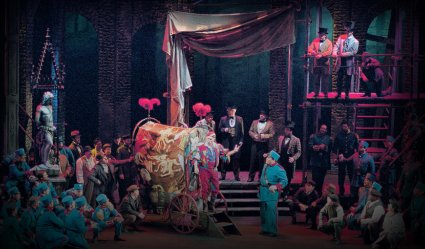 Wm: This is the production that you will stage at the San Francisco Opera in June 2010. However, in Chicago  it was staged by Frank Corsaro and played in repertory with the production of Verdi’s “Ernani” for which you were stage director.

JMC: I found Corsaro’s ideas for staging “Faust” to be very creative. However, when I was engaged by the San Francisco Opera, I was not bound to repeat any particular Corsaro innovation. I am impressed by his concept for the Garden Scene, including its lighting, so would expect to use some of the Corsaro ideas that are built into the production. These I am exploring further.

There are other Corsaro ideas that I am considering not doing. I was not interested in how he portrayed the vision of Marguerite, nor do I expect to have the crucifix in the church turn upside down, which some thought was blasphemous.

Wm: What about Corsaro’s staging of  Marguerite’s spinning song at an industrial loom, rather than a spinning wheel?

JMC: I liked the weaving machine. I expect to use that, but with a new element. Also, the ending will be different.

Wm: Corsaro clearly believes that Faust is good, rather than evil, and, at the end of the opera, makes it clear that Faust’s soul has been saved. I look forward to seeing what  you have in mind for Faust’s eternal fate.

Back to the Seattle “Trovatore”. How did come to choose the combination of sets and costumes from different productions?

JMC: Actually, the first decision was to use John Conklin’s costumes from the previous Seattle production. I remembered those costumes well and liked them a lot. Once that was decided, we looked for sets that would belong in the world of the costumes. The Minnesota Opera sets seemed to me to the best match.

The Conklin costumes encompass military uniforms and swords for di Luna and his men that remind one of the 16th century, while the gypsies are from a later period and Manrico is dressed in a style from the early 19th century. The Count’s men are in steely armor, the gypsies in a blood red, and Leonora dressed in blue. I found the mix of costume periods to be interesting. But I believe that even though one sees productions of “Trovatore” that are fixed in a particular time, there are some elements of the story that are perennial and universal.

[Below: Azucena (Malgorzata Walewska) pleads with the Count di Luna’s men to let her return to her mountains; edited image, based on a Rozarii Lynch photograph, courtesy of the Seattle Opera.] 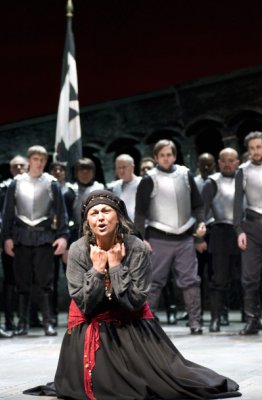 Wm: “Il Trovatore”, arguably the 19th century’s most popular Italian opera was, thanks especially to Gilbert and Sullivan, one of the most often parodized. Your filmed remarks about the Seattle “Trovatore” suggest that you believe the dramatic situations in the opera can be and should be taken seriously. Is it your conviction that playing the opera “straight” is the appropriate approach to the opera in the 21st century?

JMC: I have always been interested in “Trovatore”. It does seem to have a convoluted plot, not because of what happens in the opera itself, but because there is a lot of information from the past for the audience to understand. Ferrando has to tell his story, then Leonora her side of the story, and then Azucena. We have all the information we need from these three characters.

From that point, the story is straightforward, built upon the incredible passion that Azucena and the Count di Luna have for revenge – a passion that has been passed to the next generation by di Luna’s father and Azucena’s mother and that Azucena wants Manrico to continue to seek.

Revenge for horrible wrongs committed on the previous generation is a theme that travels across centuries. The theme’s timeliness liberates me as a director, allowing me to focus purely on the personal interactions of the characters.

[Below: José Maria Condemi works out the stage action for the Seattle Opera production of “Il Trovatore” with his Leonora (Lisa Daltirus); edited image, based on a copyrighted Bill Mohn photograph, courtesy of the Seattle Opera.] 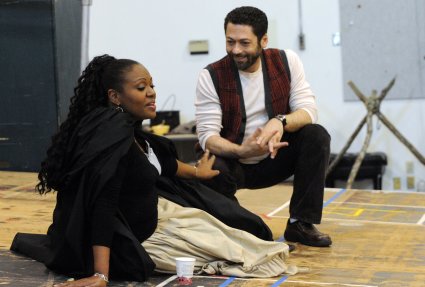 Wm: Could not one make the case that the context of the opera’s drama – the Spanish armies attempting to suppress Vizcayan insurgents, the violent revenge that Ferrando’s security forces and Azucena and the gypsies show to one another – is not really outlandish, and that such violence exists in Northern Spain and elsewhere in the world in our own time?

JMC: I agree totally. There is a prejudice carried over from the past that the story of “Trovatore” doesn’t make sense. The work is fiction, but things that are as bad as those that this opera is about, still happen in our world. For instance, one of the things that happened in recent times was the stoning of a woman to death for adultery. One only has to read the newspapers to be aware that tortures and punishments as cruel as those encountered in “Trovatore” still exist, and it wouldn’t take long to find equally horrid events somewhere in the world.

American culture lacks the element of superstition that is obviously present in di Luna’s forces, but it would not take long to find communities in the world whose people are just as superstitious as Ferrando’s men are.

Wm: If you take Azucena’s quest for revenge seriously, does it not prove to be a powerful dramatic motivation?

JMC: Yes, the strong conviction, the blinding faith, that lacks any possibility of rationality, you might find today in a suicide bomber. Certainly Azucena has that blinding faith that she must be the agent of revenge, and will try to inspire her community to follow her in that revenge.

When you are staging the “Middle Verdi” operas, you have to get past the old prejudices. Take Azucena’s first aria Stride la vampa! Although she seems to come across as if she is crazy, she is alternating between a confused state and a conscious manipulation of Manrico. We can understand that she is suffering form post-traumatic stress syndrome. In a hysterical moment years ago, she by accident killed her baby. Would such a thing happen today? It doesn’t matter. It happens in the opera.

An artist must come to know and identify with the obsession of a character like that. All of us have stories to tell about traumatic things that have happened to us. We know that a trauma can hook a person into lifetime obsessions.

Azucena saw these men seize her mother, tie her to a stake and set her on fire. In her extreme state, she first killed her own child by mistake, then seized and abducted the Old Count’s baby, whom she raised to become the Count’s sworn enemy. Azucena feels she has a mandate from her mother to make certain that this vengeance comes about. It is obsession, but one can understand from where it comes.

Wm:  Last Fall at Lyric Opera in Chicago, you directed an elegant new production of “Ernani”, Verdi’s previous opera located in Spain. Obviously, when you were working on “Ernani”, you were scheduled to do the Seattle “Trovatore” three month’s later.  Did staging “Ernani” give you ideas for “Trovatore”?

JMC: Very much so. There are a lot of moments in both operas in which energy flows in a similar way to tell each story. I took “Ernani” seriously. You have to accept the premise that in the Spain of that century, there existed a code of honor that required you to protect your enemy. The entire plot revolves around that code of honor. If you cannot accept that Silva’s and Ernani’s actions are governed by such a code, then none of the dramatic situations in the opera make any sense.

[Below: the 2009 Lyric Opera production of “Ernani”; edited image, based on a Dan Rest photograph, courtesy of the Lyric Opera of Chicago.] 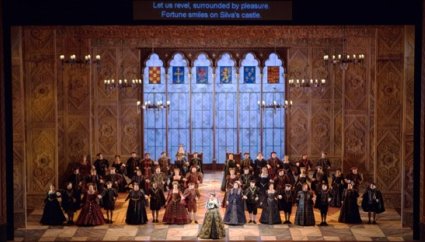 Wm: Verdi based his opera on Gutierrez’ play El Trovador, as he did a subsequent opera on Gutierrez’ play Simon Bocanegra. Gutierrez is an exact contemporary of Verdi (and Wagner), and so Gutierrez’ bicentennial will be celebrated in 2013 along with Verdi’s. Would you encourage those who admire Verdi’s “Trovatore” and “Boccanegra” to gain a better appreciation of Gutierrez’ works? Have you yourself drawn inspiration from the original “Trovador”?

JMC: I did read “El Trovador”, as I did Hugo’s “Hernani”. But I believe the only reason that either “El Trovador” or “Hernani” are consulted today is to understand how Verdi and his librettists used the situations in the play to create “Il Trovatore” and “Ernani”. How did Verdi humanize this or that situation? How did he simplify this other thing?

Wm: With the Verdi Bicentennial arriving in 2013, there must be Verdi operas that you are planning to do, or would like to do. What can you tell us of your future plans?

JMC: Certainly, I would like to do “Ernani” again. I think that is a piece that needs another look. I would also love to do “Aida” and “Falstaff” and possibly “Don Carlo”. However, later this year, I will be doing more Puccini, directing the Lyric Opera’s Harold Prince production of “Madama Butterfly” at the San Francisco Opera.