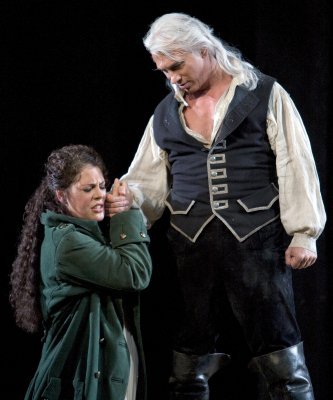 In 2009, I personally reviewed 48 performances of operas at 11 different opera companies in the United States and Germany. Time and logistics make it impossible to see every production at every company I visit each year. However, I have managed to attend at least one performance of every main season production mounted by the San Francisco Opera since calendar year 2006 (the first complete year that I posted opera reviews). Since I posted rankings for the San Francisco Opera’s main season productions for 2006, 2007 and 2008, I will continue this “tradition” for 2009.

Although I was hard on many of the San Francisco company’s performances earlier this decade, over the past two years, I have given each San Francisco Opera performance I reviewed some variant of an “A” grade. An “A” defines a performance that, in my opinion and from my experience, would be considered a well-sung, well-acted performance  should it have occurred at any  great international opera company.

If the production was an especially notable one, strongly and appropriately cast throughout the principal roles with praiseworthy sets and costumes – whether it is a new production or a revival – the performance might be awarded an A+. Deficiencies in the production or in important roles may cause an otherwise world-class production to be rated an A- or lower grade. These grades may seem uniformly high, but those who pay the San Francisco Opera’s premium ticket prices are justified in expecting performances that meet world class levels, which, as my reviews suggest, they consistently do.

It has been asked whether I plan to try to give grades to the performances at other companies I attend elsewhere in the United States and the world. Although that is not currently being considered, I do expect to establish a new website feature this month – an “end of year” discussion about the operas I attended and reviewed, both in San Francisco and elsewhere.

The following operas appear by letter grade, and within each grade, by performance date:

Tosca (Puccini) – In June, the San Francisco Opera triumphantly mounted Puccini’s popular opera about an 18 hour period on a specific day in the life of Rome in the year 1800. Few operas are so specific as to their time and place and so unforgiving of the concept producer who  likes to see a story line unmoored from any timebound reference point.

[Below: Scarpia (Lado Ataneli) makes a move on Tosca (Adrianne Pieczonka); edited image, based on a Cory Weaver photograph, courtesy of the San Francisco Opera.] 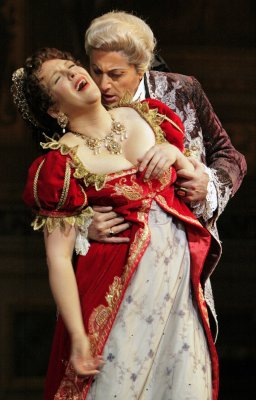 Porgy and Bess (Gershwin) – General Director David Gockley and Conductor John DeMain have both been instrumental in introducing American audiences to the original operatic version this great work.  Even though the work contains many familiar “standard” pieces that for decades were presented as a Broadway show, one does not realize how dessicated the Broadway version is until one becomes fully familiar with the power of the opera as the Gershwins intended it to be performed. Francesca Zambello’s production with Peter Davison’s sets enliven both the Catfish Row and Kitiwah Island settings. 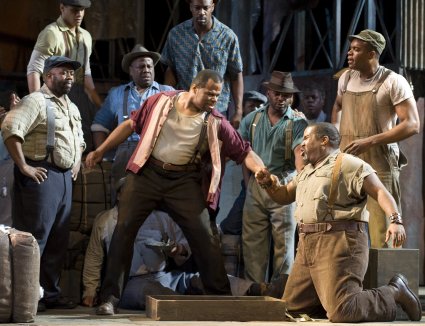 The Brothers Gershwin imposed the requirement that any performances of their work be conducted by an African-American cast, and the San Francisco Opera observed that rule, even though they regarded it as anachronistic, arguing that they should be able to cast the best singers in each role, regardless of race, as occurs in some European theaters.

Even so, the opera company assembled a cast of imposing talent, as good, regardless of the racial backgrounds of the artists, as one could imagine any company  bringing together anywhere in the world.

The cast was led by basso Eric Owens as Porgy and soprano Laquita Mitchell as Bess, with virtually all of the opera’s performers having had broad experience throughout the operatic repertoire. 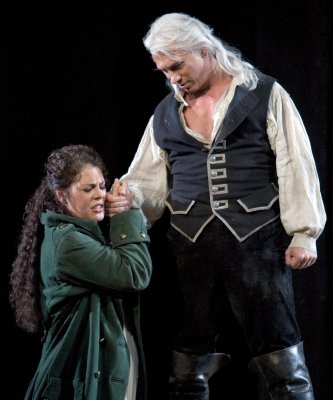 The cast was a strong one, led by returning artists Marco Berti in the title role and Dmitri Hvorostovsky as the Conte di Luna. In 2009,  every opera conducted by Luisotti was associated with impressive debuts – in the case of “Trovatore” by Sondra Radvanovsky as Leonora, Stephanie Blythe as Azucena  and Burak Bilgili as Ferrando.

Entfuehrung aus dem Serail [The Abduction from the Seraglio] (Mozart)

During Mozart’s lifetime, “the Abduction” was his most famous opera, but his four great later works and even his early “Idomeneo” have crowded this delight, written only 13 years before “Magic Flute” and Mozart’s death, from the repertories of many major opera companies. It was conspicuously absent at the San Francisco Opera, where two thirds of a century passed before “Abduction’s” first regular season performance.

[Below: the basic set for “Abduction from the Seraglio”; edited image, based on a Cory Weaver photograph, courtesy of the San Francisco Opera.] 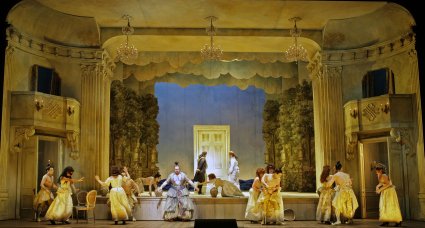 A new joint production with Lyric Opera of Chicago, premiering there earlier in the year provides an opportunity for audiences to appreciate some of Mozart’s best vocal music. Its underlying message of tolerance and reconciliation between two different civilizations may even be a little bit ahead of its time. The production introduced the team of Chas Rader-Shieber (stage director) and David Zinn (sets and costumes) to San Francisco.

Cornelius Meister, not yet 30, proved a major new conducting talent. The principal singers were Mary Dunleavy as Constanze, Anna Christy as Blonde, Matthew Polenzani as Belmonte, and Andrew Bidlack as Pedrillo, joined by the comic antics of Peter Rose as Osmin with the hilarious assistance of three henchmen in mute roles.

One of the highlights of the Fall Season was the company debut of coloratura soprano Diana Damrau, who romped through Laurent Pelly’s whimsical sets as the daughter of the 21st.  Her Tonio was Juan Diego Florez in his second visit to San Francisco Opera, after a five year absence.

[Below: Juan Diego Florez as Tonio; edited image, based on a photograph, courtesy of the San Francisco Opera.] 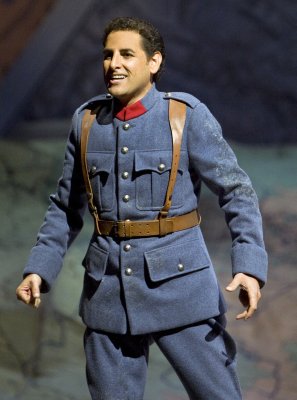 Music director Nicola Luisotti, firmly in command of the Italian wing at San Francisco Opera, proved his versatility by adding Richard Strauss’ “Salome” to his list of conducting triumphs. The title role was sung by the debuting Nadja Michael, and her portrayal instantly ranked as one of the greatest Salomes in San Francisco Opera history, a company with a reputation for doing this opera well.

[Below: Ordered by King Herod (Kim Begley, far left) to kill Salome (Nadja Michael, far right), the executioner prepares to behead her as the final curtain falls; edited image, based on a photograph, courtesy of the San Francisco Opera.]

Luisotti and Michael shared the limelight with Greer Grimsley, whose extraordinary Jokanaan is his best role to date at the San Francisco Opera.

Anna Netrebko’s extraordinarily well-sung and -acted Violetta, in a performance conducted by Donald Runnicles, made this “Traviata” one of the most memorable in San Francisco Opera history. Of the two “Traviata” productions  owned by the Los Angeles Opera, this reviewer prefers their other one, but L. A. Opera was itself mounting its estimable Agostinucci production during the same month, and Marta Domingo’s “flapper era” concept piece did provide Netrebko with some stunning images in costume.

[Below: Anna Netrebko as Violetta in Marta Domingo’s Jazz Age “La Traviata”” edited image, based on a Terrence McCarthy photograph, courtesy of the San Francisco Opera.] 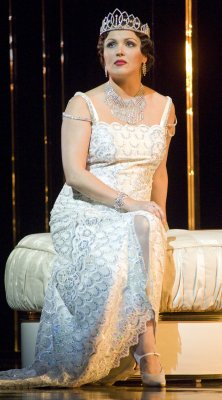 Dwayne Croft proved a sonorous and affecting Germont. Charles Castronovo, in a heavier role than one associates with his light lyric tenor, was a handsome looking Alfredo.

Musically, this “Tabarro” was brilliantly performed. Patrick Summers was conductor for a trio of principals – Paolo Gavanelli as Michele, Patricia Racette as Giorgetta and Brandon Jovanovich as Luigi – who provided a searing retelling of the music drama about marital infidelity and death on Paris’ Seine barge embankment.

[Below: Michele (Paolo Gavanelli) holds Giorgetta (Patricia Racette), who sees he has killed her lover, Luigi (Brandon Jovanovich); edited image, based on a photograph, courtesy of the San Francisco Opera.] 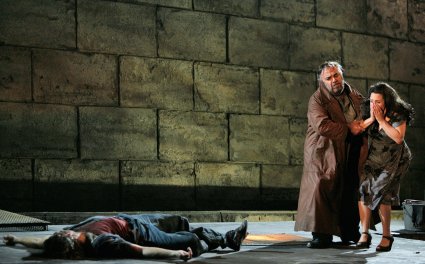 Also praiseworthy were the group of secondary performers, led by the Talpa of Andrea Silvestrelli, the Tinca of Matthew O’Neill and the Frugola of Catherine Cook. The sets by Allen Moyer hardly matched the singing.

Paolo Gavanelli was persuaded by San Francisco Opera to add Gianni Schicchi to his list of roles, and San Francisco was the place of role debut.

We seem to be in a period in which concept directors like to shift “Gianni Schicchi” from the Florence of Dante’s day to somewhere in the last century. It made no particular sense to do so, but the opera’s fun shone through.

[Below: Lauretta Schicchi (Patricia Racette) steals a kiss from Rinuccio Donati (Louis Lomeli); edited image, based on a photograph, courtesy of the San Francisco Opera.] 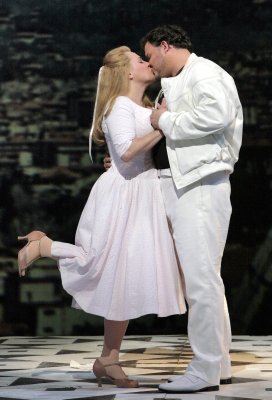 Gavanelli was joined by Patricia Racette, whose singing of the opera’s most famous aria, O mio babbino caro, was sufficiently persuasive to draw an audience ovation (and to persuade Gavanelli’s Schicchi to entangle both himself and the family of his daughter’s fiancee in an illegal and high risk conspiracy.)

Yet another Luisotti conducting assignment, and with it two more important San Francisco Opera debuts – Johan Botha as Otello and Marco Vratogna as Iago.

[Below: the enemy Turks are burned in effigy; edited image, based on a photograph, courtesy of the San Francisco Opera.] 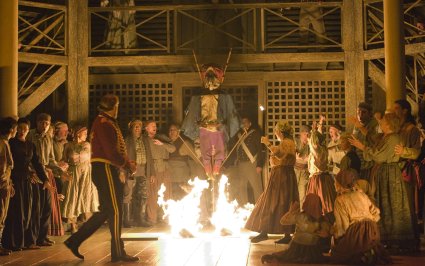 The one truly unsuccessful physical production of the season was set designer Allen Moyer’s decision to “rescue” Puccini’s tale of mental distress in a cloistered nunnery by moving the opera to a Catholic children’s hospital.

Credit is due to the production team that originally conceived this “Angelica” a half-decade ago for New York City Opera. So many opera companies would perform pieces of Puccini’s three opera “Trittico”, but would ignore “Angelica”; the idea was to “modernize” the opera to de-emphasize its religious trappings and present it as a psychological manifestation of stress and despair.

Unfortunately, in the nuns’ new surroundings, the opera no longer made sense: how could a hospital administration keep the inquisitive Sister Angelica, now interacting on a daily basis with the outside world, from escaping the cloister’s mind control and maybe even her cloistered imprisonment itself?

One imagines that when this children’s hospital idea was being conceived, its intent was not to improve the drama, so much as to spare the  stage director James Robinson from the expectation of composer and librettist to show the Virgin Mary answering Angelica’s prayers and reuniting her in the afterlife with her child.

Here the production team  apparently believes that 21st century audiences need clinical explanations in order to enjoy what are intended to be supernatural operatic phenomena. But last year, the Los Angeles Opera commissioned Hollywood film director William Friedkin (“The Exorcist”) to present the opera with an unalloyed religious miracle at opera’s end, thereby unlocking the opera’s dramatic power. All previous efforts to “explain away” the opera’s ending to assure the opera’s salvation no longer seemed worthy.

[Below: Nurse Angelica prays to the Virgin’s shrine at the Children’s Hospital; edited image, based on a photograph, courtesy of the San Francisco Opera.] 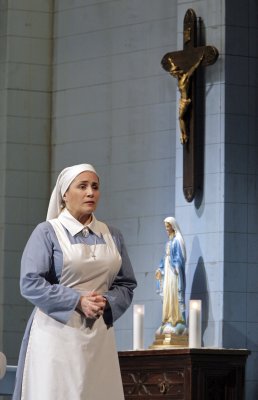 For those praying for some sort of redemption from Robinson’s and Moyer’s apostate mounting of the opera, there was the celestial singing of Patricia Racette in the title role and a strong casting for her sisterhood of sisters. There was also the high drama of the confrontation with Angelica’s nemesis, the Principessa, chillingly performed by Ewa Podles in a company debut.

For previous posts in this series:

Anyone wishing to agree or disagree, or otherwise comment upon anything on this post, or on any other post that has appeared on this website in 2009, or any previous year, please do so by sending me a message at [email protected]

Some of the responses will be posted.