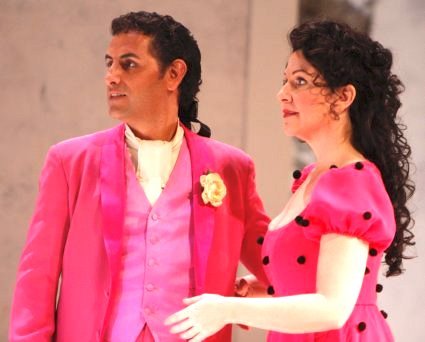 The title of Gioacchino Rossini’s most famous work, identifying the occupation of a chief character, Figaro, derives from the subversive French play by Beaumarchais that helped accelerate the national campaign against aristocratic privilege that culminated in the French Revolution. Not quite three decades later, the Revolution, including its Napoleonic aftermath, was over. Rossini prepared a comic opera for the San Carlo Theater in the Kingdom of Naples, that he originally named “Almaviva”. Since the opera was written for a theater in that conservative monarchy it was, of course, shorn of the Revolutionary politics of the original play.

All of the biographies and essays on the opera give the reason that Rossini had first named the opera after the Count Almaviva, rather than the Barber. There existed a famous opera by Paisello called “Barber of Seville” and Rossini intended to observe, as a mark of respect, the convention of giving a new name to any opera for which a predecessor opera was still performed. But Paisello very obviously permitted his partisans to disrupt the first performance of Rossini’s work to produce a fiasco.

After that, all respectful conventions ceased to be observed, and Rossini renamed the work to conform to that of Beaumarchais’ play (and Paisello’s soon to be irrelevant opera). Except for the first performance and a short period for it to become widely known, there never has been a time when “Barbiere” was not acknowledged as the greatest of hits among comic operas.

Not only does the opera’s title refer to Figaro, whoever is cast as that character has the fortune to sing one of the two or three most popular operatic arias ever written, Largo al factotum. In addition, the part of Almaviva was considerably shortened in standard practice, eliminating a very difficult, sustained series of tenor coloratura arias in the final scene. As the role of Almaviva shortened, the claim of Figaros to precedence increased. (The artist performing Figaro always takes the final curtain call. Nathan Gunn, in this performance, even with high-powered performances from his co-stars, received a well-deserved ovation at opera’s end.)

The excision of this big chunk of Almaviva’s role changed the dynamics of casting the opera. Lyric tenors, of the kind that would sing the heavier Donizetti tenor parts and those written by Gounod and his successors in France had no problem with what remained – Almaviva’s melodious cavatina in the first act and some boistrous and enchantingly written comic routines for the rest of the opera.

Meanwhile, there was a worldwide paucity of tenors trained to sing the coloratura leggiero roles like the original Almaviva. And concurrently there was a change in taste. Francis Toye, a biographer of Rossini and Giuseppe Verdi, writing in 1934, identified the “excessive ornamentation” of Rosina’s part as a defect of “Barbiere” and, of course, approved of the elimination of Almaviva’s Cessa di piu resistere and the extensive passages of bravura ornamentation that comprise and follow it.

The Los Angeles Opera imported the production of “Barbiere”  from the Teatro Real in Madrid. Emilio Sagi’s production is a thoughtful, thought-provoking 21st century re-evaluation of Rossini’s masterpiece. Although elements of it (the incorporation of Andalusian dancing throughout much of the performance, discussed in my review of the alternate cast) are obviously non-traditional, the most significant departure from the performance traditions of the last century or so is the restoration of all of Rosina’s and Almaviva’s music in a form that Rossini would have recognized.

In both the opening night and alternate casts, pairs of Rossini singers who perform the music as written appear as Count Almaviva and his soon to be Countess. Juan Diego Florez is paired with the mezzo Joyce DiDonato and Dmitry Korchak paired with soprano Sarah Coburn. (My review of the alternate cast discusses the fact that Rossini wrote the parts of Rosina and her maid Berta so that Berta takes the lower voice in ensemble passages when a soprano sings and the higher voice – with DiDonato the Berta is Kerri Marcinko – when Rosina is a mezzo.)

For the Rossini purist the authenticity of the Rossini singing by the two Los Angeles Opera casts should  balance out unconventional staging , that includes such eccentricities as the principals creating origami birds during the midpoint finale and ubiquitous dancers who assemble as audiences to listen to the soliloquies of Figaro, or Rosina, or Don Basilio, etc. But “Barbiere” is intended to be madcap, and even Sagi’s wildest ideas enhance the fun inherent in this piece.

[Below: The Count Almaviva (Juan Diego Florez), disguised as the impoverished student Lindoro (who travels carried by henchmen in a sedan chair), serenades the house where Rosina resides; edited image, based on a Robert Millard photograph, courtesy of the Los Angeles Opera.] 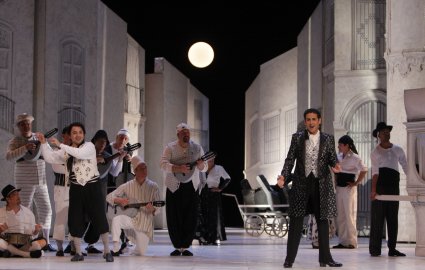 As Figaro (Nathan Gunn) arrives pushing a mobile barbershop that obviously supplements whatever trade he receives at his barbershop in another part of Seville. When Gunn’s Figaro gives directions to where that barbershop may be found, dancers appear with a scale model of Seville, and with headdresses that represent Sevillan monuments.

Renata Schussheim’s first and second act costumes have a basic black and white design scheme, that, in the opera’s third act finale is replaced by colorful costumes, with red shades dominating.

[Below: the Count Almaviva (Juan Diego Florez, left) converses with Figaro (Nathan Gunn), both wearing their “early act” costumes; edited image, based on a Robert Millard photograph, courtesy of the Los Angeles Opera.] 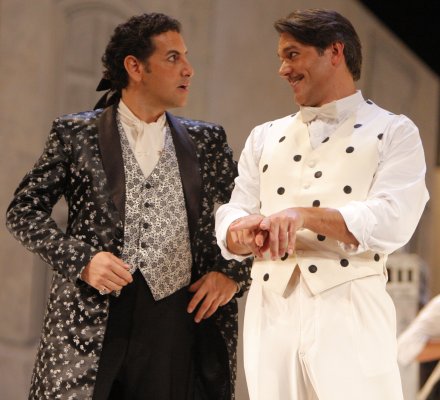 This cast features Bruno Pratico, who was with Juan Diego Florez in the original Madrid production of 2005. One suspects that these artists, each of whom has a flair for comedy, have honed their comic routines even beyond those originally conceived by the stage director. (Florez and Pratico also appear together in the Laurent Pelly production of Donizetti’s “Fille du Regiment”, as they did two months ago in San Francisco.  For my review, see: Debuting Diana Damrau Delights as Donizetti Diva: San Francisco “Fille du Regiment” – October 13, 2009.)

Pratico is famously associated with his pet chihuahuas, and so, when Bartolo leaves his house in the first act, he has a chihuahua walking with him, and, as he walks away, Pratico’s Bartolo mimics the chihuahua’s gait. (Florez and Gunn, in a routine one imagines was first conceived of many performance ago, then appear to have stepped in the chihuahua’s leavings, and try to remove the inconvenience from their shoes.)

[Below: Doctor Bartolo (Bruno Pratico) and chihuahua leave his household on an errand; edited image, based on a Robert Millard photograph, courtesy of the Los Angeles Opera.] 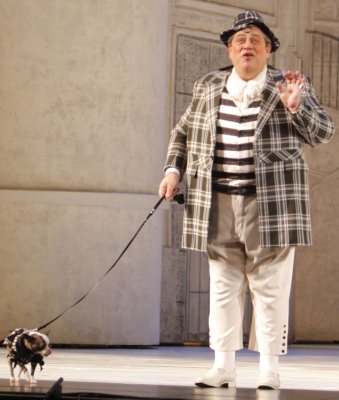 The dancers, in addition to their flamenco steps, have a lot of heavy lifting, or at least appear to, as they move walls and pillars and furniture to transform the Seville street exterior into the spacious interior of Doctor Bartolo’s residence. 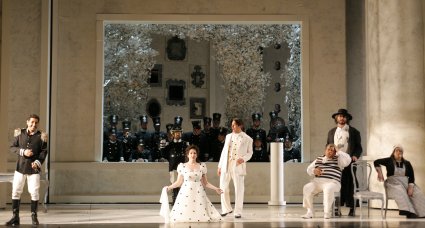 “Barber’s” second act has two of the greatest buffo arias in the standard repertory, Don Basilio’s La Calunnia e un venticello and Doctor Bartolo’s A un dottor della mia sorte. The part of Basilio is not  particularly large, but with Calunnia and the opportunity to play one of opera’s more likable rascals broadly, it attracts some of the greatest basso voices (I myself have seen Nicola Rossi-Lemeni, Giorgio Tozzi, Cesare Siepi and Nicola Ghiaurov perform this role at the San Francisco Opera.)

He is one of the leading basso profondos of the younger generation and I suspect will be leaving some of the Italian character roles behind as he concentrates future energies on Wagnerian Opera and on the major Verdian basso roles. But he is a delight as Basilio, a role I think he should keep in his repertory. 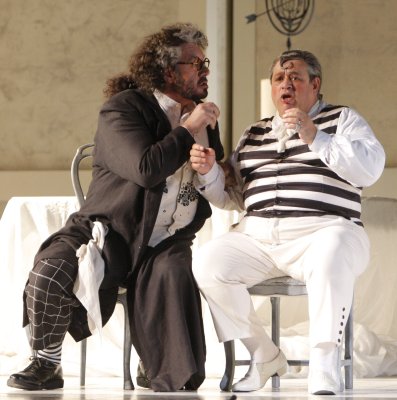 There are two reasons – the Almaviva of Juan Diego Florez and the Rosina of Joyce DiDonato – why this performance moves out of the category of merely world class productions of “Barbiere di Siviglia” into the category of world class “Barbiere” productions that display incomparable singing in the Rossini style. (That I spoke as highly of their alternate cast consisting of Dmitry Korchak and Sarah Coburn suggests how special this series of performances by Los Angeles Opera should be considered.)

Florez’ voice is of a light weight that, in my opinion, is challenged by such large American theaters as San Francisco Opera’s War Memorial Opera House and the Kennedy Center, in which Washington National Opera performs. But I believe that the Dorothy Chandler Pavilion, home of the Los Angeles Opera, is a large house that actually favors Florez’ voice, and, even in the other houses he brings an astonishing vocal dexterity, physical athleticism (he can and does leap into the air like a ballerino), an appealing appearance, and superb comic timing.

No opera lover with an opportunity to do so should pass up the chance to hear him in live performance singing Almaviva’s extensive third act group of arias beginning with Cessa di piu resistere. This traditional cut is regrettable for several reasons, not excluding the fact that it shows that the young Almaviva is angry that Bartolo has victimized a woman, supposedly acting as a guardian, but in fact keeping Rosina as a prisoner and misappropriating her resources. The restoration of these passages humanizes and softens Almaviva’s image, that, of course, is battered in the opera’s sequel, Mozart’s “Marriage of Figaro”.

Even more significant from the standpoint of a 21st century re-evaluation of Rossini’s operas and the Rossini style of bel canto singing is the work of Joyce DiDonato.  She is an authentic Rossini mezzo-soprano – in this performance and also in her albums and recordings of Rossini’s music. Her album of arias written for Isabella Colbran, the Madrid-born singer, so important to Rossini’s career is revelatory. DiDonato has assumed the mantle of Marilyn Horne, who led the Rossini revival of the 1970s, and is moving into territory that Horne had not assayed.

As a point of great interest, one should listen to her recording of Elisabetta’s aria Qant’e grato all’alma mia from Rossini’s “Elisabetta, Regina d’Inghilterra”, in which one  will recognize that the famous “viper’s sting” moderato section of Rosina’s Una voce poco fa was mined from the former opera.

We are so used to Una voce poco fa and the “Barbiere” overture being associated with comic situations that it is hard to think of how either fits in an opera seria context. (Can anyone these days envision how the “Barbiere” overture had the right tinta for a story of the Roman Emperor Aurelianus visiting Queen Zenobia in her Palmyran palace, when that overture was connected to Rossini’s “Aureliano in Palmyra”?)

[Below: the Count Almaviva (Juan Diego Florez) has just proposed that Rosina (Joyce DiDonato) become his Countess, and the two are married on the spot; edited image, based on a Robert Millard photograph, courtesy of the Los Angeles Opera.] 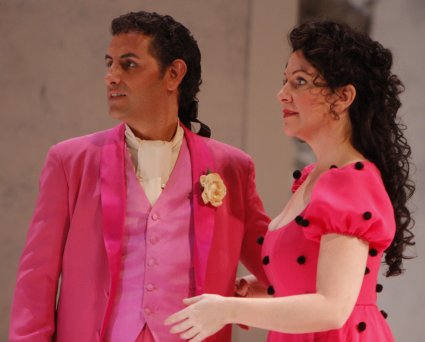 After the audience gets its Singing Lesson in how the role of Almaviva should be performed, we are back in the province of Emilio Sagi’s imagination, with as colorful a finale as could be conceived. The walls of Doctor Bartolo’s house disappear and the cast assembles under a stage sky festooned with stars and kites.

[Below: Almaviva (Juan Diego Florez), center right in pink, sings his part in the “Barbiere” finale as the other principals and chorus join in; edited image, based on a Robert Millard photograph, courtesy of the Los Angeles Opera.] 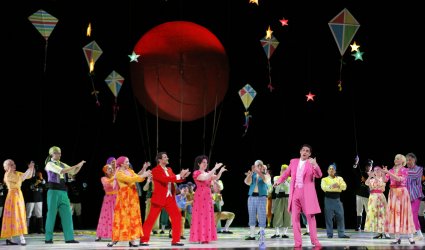 Soon the Almavivas are on their honeymoon in a passenger balloon that just happened to be waiting in back, in case things went well for the Count.

[Below: the Countess Almaviva (Joyce DiDonato) and her Count (Juan Diego Florez) leave Seville in a passenger balloon for their honeymoon; edited image, based on a Robert Millard photograph, courtesy of the Los Angeles Opera.] 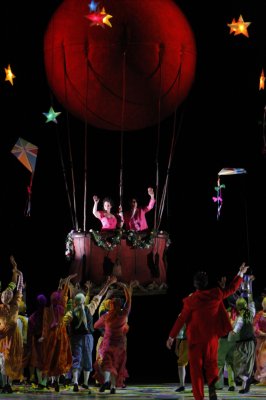 This “Barbiere” proved to be a wonderful holiday gift for anyone who saw (or will see) either cast.