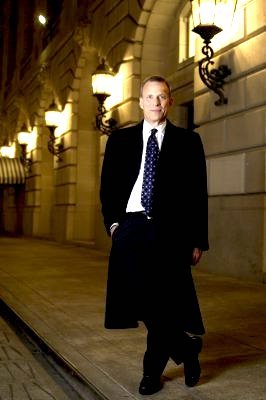 [A note from William: this website began its existence in November 2005, less than two months before David Gockley became the sixth General Director in the history of the San Francisco Opera. Over the past four years, I have reviewed each of the productions that has been presented in San Francisco during the “Gockley Era”.  I recently had the opportunity to sit down with him for an interview, which will be posted in two parts.] 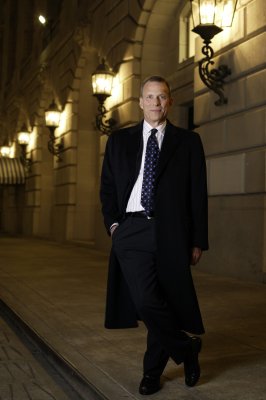 Wm: When you assumed the General Directorship of the San Francisco Opera, you indicated your determination to restore the company to the level of quality associated with the General Directorship of Kurt Herbert Adler, which lasted from 1954 through 1981. As a person who obviously admired Adler’s accomplishments, how would you characterize your progress toward that goal? Now that for almost four years you have been leading the company that Adler helped make great, have you learned new things about Adler’s legacy that impress or surprise you?

DG: I certainly have gone in the direction of emulating Adler’s legacy. What I remember about Adler was that he always assembled exciting casts of the great singers of the time in San Francisco, and that he was always discovering new artists, especially Europeans.

We do live in a time that is a lot different from the Adler era. The competition we face is stiffer than Adler encountered. We compete with many more opera houses, including a number able to pay big fees. There are glamorous opportunities in Europe that encourage artists to concentrate their time and energy there. Yet, we have had our own successes in attracting great singers to San Francisco.

I think Adler believed that opera should be brought to the people one way or another. He created the Young Artists’ Program, providing the artistic talent for such innovations as “Brown Bag Opera” (performing scenes from opera at times and places that people might gather). He also created the Western Opera Theater, which took complete operas on tour to smaller cities. The “Opera in the Park” concerts assured that a wider public could attend free performances by opening weekend artists accompanied by the San Francisco Opera Orchestra.

Where Adler emphasized “physical” outreach, I am looking to increase our “electronic” outreach. One way to do this is through high definition opera telecasts in movie theaters. Although San Francisco Opera cannot compete with New York’s Metropolitan Opera on a national basis, we are expecting to have an impact on the Western part of the United States, where within two or three years we should have 150 to 200 cinema locations where films of our performances can be seen.

Where Adler did develop “electronic” outreach were the weekly opera broadcasts for each season from 1971 through 1981, that ended when Adler left. We have re-introduced performance broadcasts.

Adler believed in both parts of the Young Artists program – the Merola summer program and the full-year fellowship program that was later named after him. These programs are running as well as they ever have, creating opportunities for seasoned young artists and providing a bridge program from their academic experiences.

The major area where we currently lack the capability to match Adler’s successes is in the area of new productions. Adler depended on several “megadonors” to finance new productions, and, many that he would go to have died, without others taking their place. We do not have the financial ability that Adler had to commission talented producer-designers like Jean-Pierre Ponnelle or Günther Rennert to develop new productions for the San Francisco Opera.

I have come to think of new productions as the icing on a cake. Our annual gifts help assure that we can cover the costs of the cake – that being the opera casts, orchestra and chorus – but there is not enough left over to pay for the icing.

Wm: You are leading an opera company during a period of great danger for this complex and expensive artistic medium. In the United States you are expected to finance the opera on what you can raise from ticket sales and from the substantial contributions of individual patrons. In what ways do you as an American intendant have to approach opera company management differently from your European colleagues? For San Francisco Opera, what has suffered the most from the economic downturn?

DG: This indeed is a dangerous period for the medium. We have to approach opera differently from our European colleagues. We expect our community to support us in three ways: to buy tickets, to make gifts, and to include the San Francisco Opera in their estate plans.

Because of our dependence on individuals, we have to be a “warmer and fuzzier” organization. My administration and our staff have to be friendly to our patrons and audiences. We have to present a repertory, which we believe will achieve a 90% average attendance.

Since we must raise 35 million a year from private support, we must make sure that as many people are as happy with the organization as can be. We cannot take chances with productions that our audiences may find offensive or overly controversial.

If a European company loses an important donor, it would be a disappointment, but its overall impact on the company might be very small. But the downside of privately supported art is that if you offend an important contributor, you could lose millions of dollars – a loss that would hurt the company severely.

DG: Since I have never been in the world of European subsidies, they look awfully attractive from our vantage point, but there probably are negatives. The companies in Great Britain and Canada are in the middle between the non-subsidized American companies and those of the European continent. I believe the Royal Opera House Covent Garden gets something like 25% of its budget from the government, so they scramble for support in the private sector. Even so, they still have very high prices and are criticized for being a home for “the toffs”.

It does seem obvious that the subsidies make it much easier to finance new productions in Europe, and the lack of them makes it harder to do them in the United States.

Wm: Many observers expect that your artistic collaboration with Nicola Luisotti will affect profoundly the future of the San Francisco Opera. How did you come to know that he should be your musical partner in shaping the company’s future and how did you entice him to come here? What are you two planning for the future?

DG: I became aware of Nicola Luisotti a couple years before I moved to San Francisco. I had seen him conduct a performance of Verdi’s “La Traviata” at the Opera National de Paris. I engaged him to conduct Verdi’s “Aida” at the Houston Grand Opera. I had visited San Francisco in the Fall of 2005 and was impressed at his conducting of Verdi’s “Forza del Destino”. Then I traveled to Seattle to hear him conduct Verdi’s “Macbeth” for the Seattle Opera.

[Below: Nicola Luisotti sits in front of War Memorial Opera House; edited image, based on a Terrence McCarthy photograph; courtesy of the San Francisco Opera.] 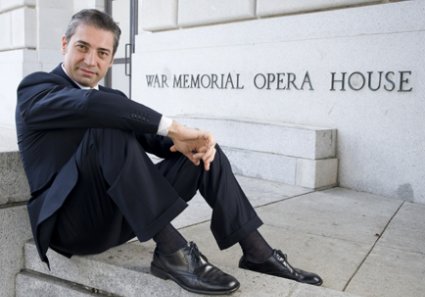 It was in Seattle that we sat down and talked for the first time on a human level. I not only was impressed with him artistically, I found him to be a unique personality, with an attitude towards his work that I would characterize as generosity – that it is not about him, but about the music and about the opera. Of course, there is some ego there. He knows he is right on the musical issues, but it comes within an overall personality of generosity and lack of guile.

When you make an artistic choice, it may work on paper, but when the person arrives, you may learn of the downside of your choice. With Luisotti, however, in not one of our collaborations – Puccini’s “La Boheme”, Verdi’s “Trovatore” and Richard Strauss’ “Salome”, and also our meetings to discuss the repertory and singers in future seasons – have I yet to see any downside to our relationship.

I think he has specific tastes in regards to singers, and that he will have a lot of influence on whom we see here. I trust him. It means, I think, that I am not making a lot of small decisions about casting. Between Luisotti and Gregory Henkel, the company’s Director of Artistic Administration, those decisions can be delegated by me to them.

I see myself involved with the institutional, endowment and cost structures, because that is where I can make my biggest contributions. For all the great things that San Francisco Opera has done, it has always been one step away from the financial precipice. It is frightening to be in so precarious a financial situation every single year, and having so many demands made on the company.

I am very concerned about the San Francisco Opera’s future, and am working to set is on a path that will assure it 25 to 50 years more life without such a precarious financial existence.

[In the second part of the interview, David Gockley answers questions about Francesca Zambello’s “American Ring”, whether archival recordings of San Francisco Opera performances will be released as CDs and DVDs in the future, the potential of new space at the Veterans Building next door to the opera, and some of the operas that the company will mount in the future.]