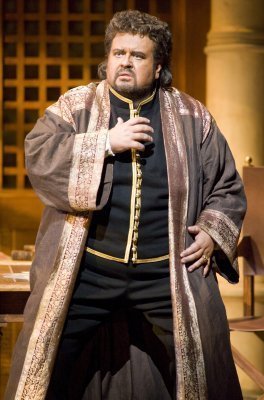 Nicola Luisotti, in his first season as Music Director of the San Francisco Opera, has demonstrated command of both the Italian and non-Italian operatic repertory – in September with Verdi’s “Il Trovatore”, in October with Richard Strauss’ “Salome”.

In November Luisotti brought forth his conceptualization of Verdi’s dramatic masterpiece, “Otello”. He assembled a cast of principals that he had worked with in Europe, two of whom were making San Francisco Opera debuts.

[Below: Otello (Johan Botha) in charge in Cyprus; edited image, based on a Cory Weaver photograph, courtesy of the San Francisco Opera.] 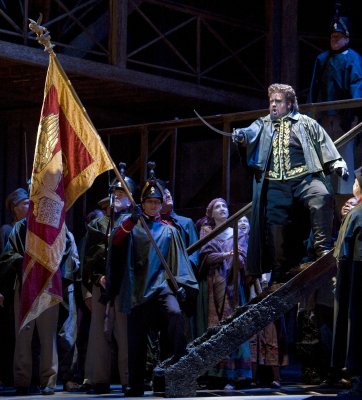 As Luisotti mounted the podium, he received shouts of “bravo” from the San Francisco audience, even before touching his baton. The curtain rose on John Gunter’s unit set, which premiered in Chicago in 2001. A three story wooden structure, it was evocative in of the “Wooden O” of Elizabethan Theater. It also, perhaps, seemed to suggest an official building, serving as both the colonial government and a hotel-apartment complex with open atrium. Oddly, a ceiling fan nestled in its top story.

Gunter’s production of Beethoven’s “Fidelio” for the San Francisco Opera, last seen here in 2005, is one of the very best productions created for the San Francisco stage. Gunter’s “Otello” production, if not in the same league, was serviceable and made effective use of the vertical spaces of the War Memorial Opera House stage. At its visually most stunning, the third floor blinds were open, a lion of Venice banner unfurled, and all three floors were filled with functionaries, soldiers and Cypriots.
[Below: John Gunter’s unit set for “Otello”, here for Ludovico’s arrival in Act III; edited image, based on a Terrence McCarthy photograph, courtesy of the San Francisco Opera.] 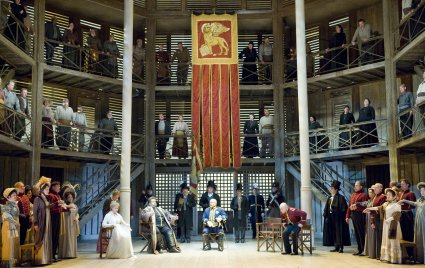 The sets did appear to facilitate the staging of the action by revival director Stephen Barlow for the succession of events in the first three acts. (The entire set was covered by draperies for the final act in Desdemona’s bedroom.) For example, Barlow places Cassio and Iago on the second floor while Otello, below, strains to overhear their conversation.

All three of the principals had performed in opera performances in Europe conducted by Luisotti. Johan Botha, from his first utterance (a full-throated Esultate) displayed a powerful tenore di forza.

[Below: Johan Botha is Otello; edited image, based on a Terrence McCarthy photograph, courtesy of San Francisco Opera.] 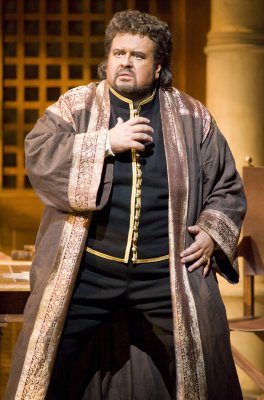 Marco Vratogna, like Luisotti, still in his first decade of professional opera, instantly displayed a full grasp of the dramatic and vocal depth of the role of Iago. His performance evoked memories of the two mid-century decades at San Francisco Opera when Mario Zanasi was Mario del Monaco’s ensign and Tito Gobbi and Kostas Paskalis performed his duties for James McCracken.

[Below: Marco Vratogna is Iago; edited image, based on a Terrence McCarthy photograph, courtesy of the San Francisco Opera.] 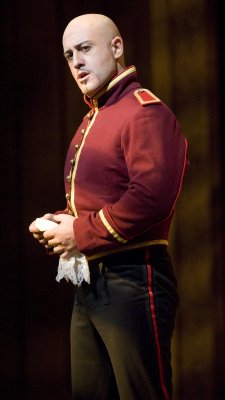 Zvetelina Vassileva had previously sung a “late season” second cast Leonora in Verdi’s “Il Trovatore” in 2004 and in a smaller role in Glinka’s “Ruslan and Lyudmila” at San Francisco Opera in the 1995 production (that served as Anna Netrebko’s San Francisco Opera debut) as well as another role in Monteverdi’s “Coronation of Poppea” in 1998). She has an attractive lyric voice, lighter than the spinto artists whom we are used to in this role, particularly in the third act when Desdemona must defend herself against Otello’s savage denunciation of her. 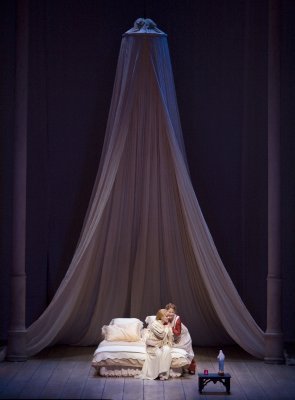 Even so, much of Desdemona’s music, including her most famous extended scene in the opera’s final act, containing the “Willow Song” and “Ave Maria” is sung to light orchestral instrumentation – woodwinds and strings playing softly – which is advantageous for displaying Vassileva’s musicality.

[Below: Desdemona (Zvetelina Vassileva) prays to the Virgin Mary; edited image, based on a Cory Weaver photograph, courtesy of the San Francisco Opera.] 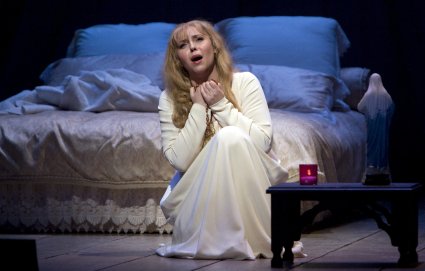 The Cassio was Beau Gibson, a graduate of San Francisco Opera’s Merola program (and also Houston Grand Opera’s young artists program). Having heard him sing the title role of Gounod’s “Faust” in an emergency situation, and both Wagner and Verdi roles, I remain persuaded that he belongs in the lighter roles of the French repertoire, and such genres as Mozart and bel canto opera, rather than the Verdi and Wagner roles requiring heavier vocal weight. On the other hand, the Emilia, Adler fellow Renee Tatum displayed a voice ready for much larger assignments.

The Ludovico, Eric Halfvarson, was in good voice for this brief but important role.

Special note should be made of how wonderfully the chorus, under the direction of Ian Robertson, sounded and acted, especially in the first act storm scene. Luisotti, was, as usual, a marvel, bringing out the best of orchestra, chorus, and principal singers. This “Otello” should not be missed.