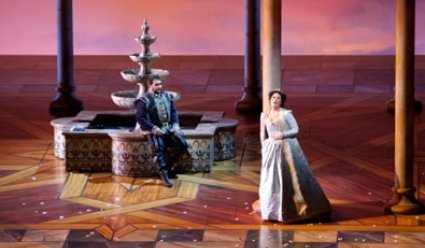 Lyric Opera has done immeasurable service to the cause of Early Verdi by creating a stylish new production of the Maestro’s megahit of 1844, “Ernani”. In consonance with the beautiful sets was a matching musical performance led by the conducting of Renato Palumbo, with a lustrous cast of principals, whose performances further confirm my belief that we are moving into a new era of stellar Verdi singing.

The reason for reviving “Ernani” is its consistently beautiful, vigorous music, and the exposition of how Verdi, building on the advances of Donizetti in displaying Italian opera’s dramatic possibilities, created the distribution of voices that we now categorize as the Verdian soprano, tenor, baritone and basso.

Donizetti’s fatal illness was about to take over his mind and body, but while still vigorous he showed the way for the heroic possibilities of the tenor voice in projecting highly charged emotional content. The most famous example is Edgardo in his “Lucia di Lammermoor” with his passionate love affair with the emotionally fragile Lucia, his high risk confrontations with her brother, his dangerous decision to confront his enemies at Lucia’s wedding, and his self-destruction at the news of Lucia’s death.

To me, an even more direct predecessor of Verdi’s Ernani is Roberto, Earl of Essex in Donizetti’s “Roberto Devereux” whose strong passions and impulsiveness lead to his reluctant execution by the powerful woman who loves him. Significantly, the space in time between “Devereux” and “Ernani” is approximately the same as that between “Ernani” and Verdi’s “Il Trovatore”, an opera that in many ways is the exposition of Verdi’s most advanced ideas in presenting a heroic tenor in the self-destructive mold of Lord Byron and the Romantic movement in arts and literature he exemplified.

Victor Hugo’s play Hernani, the opera’s source material, dates from the year of the French Revolution of 1830 and is much a statement of the Romantic era’s nihilistic attitudes towards the monarchical and feudal past as Delacroix’ painting “Liberty Leading the Masses”. Verdi, himself no fan of the old order of small Italian states dominated by foreign powers, found the anti-establishment messages of Hugo’s plays as attractive as the opportunity for a creating a fast-paced operatic melodrama with larger than life characters.

As, Ernani, the nobleman disguised as an outlaw masnadiero, Salvatore Licitra displayed the vocal weight required for the rousing Verdian melodies, and simultaneously the flexibility to sing a role, whose music was written nine  years after “Lucia di Lammermoor” and seven after “Roberto Devereux”.

The member of the cast whom I have seen previously sing both Donizetti and Verdi is Sondra Radvanovsky, the Elvira. My reviews of her performances in the title role of Donizetti’s “Lucrezia Borgia” and Verdi’s “Il Trovatore” may be found in the November 2008 and September and October 2009 archives on this website. Elvira’s music, like that of Leonora in “Trovatore” combines an extensive range, requiring both florid coloratura and the weightier requirements of the dramatic passages that Verdi wrote for his sopranos.

I had last seen Radvanovsky in “Trovatore” in San Francisco on October 4 of the previous month. At the performance, unknown to the audience, she had torn a ligament, and, then, three days later (fortunately, the last performance in the series), a collision with another artist broke one of her toes. So, with careful planning of her onstage activity by stage director Jose Maria Condemi, she performed the role wearing a cast beneath her heavy costumes.

Yet, even though those sitting close observed some understandable awkwardness of movement, I suspect most of the audience was unaware that she was performing under considerable duress. (No announcment was made of her injury.) She sounded, as she always does, wonderful.

[Below: Elvira (Sondra Radvanovsky) receives presents from her women in waiting for a wedding she does not wish to have; edited image, based on a Dan Rest photograph, courtesy of the Lyric Opera.] 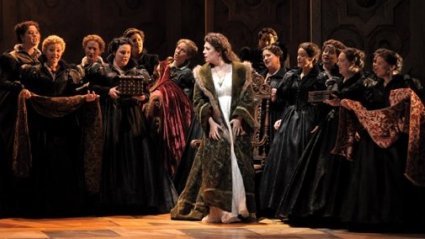 Boaz Daniel, the Israeli baritone whom I had last seen as Kurwenal in Wagner’s “Tristan und Isolde” at San Francisco (see the November 2006 archives) was a glorious Carlo, who began the opera as King Charles I of Spain (although first appearing in disguise), but obtained much greater power in the third act on his election as the Holy Roman Emperor Charles V. Not only was his full baritone pleasing, but he was throughout the performance an engaging actor.

[Below: Carlo (Boaz Daniel, left) reveals himself as a rival for the love of Elvira (Sondra Radvanovsky) who prefers Ernani (Salvatore Licitra, right), edited image, based on a Dan Rest photograph, courtesy of the Lyric Opera.] 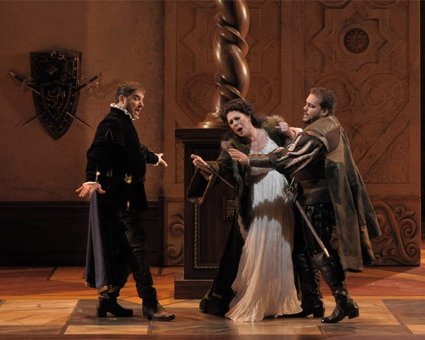 The fourth member of the illustrious quartet of principals was basso cantante Giacomo Prestia, who, although a previous winner of the Philadelphia Pavarotti competition is not widely known in the United States and was making a most impressive Lyric Opera debut.

The first scene is the outlaws’ encampment with Ernani’s spacious tent at stage right and an oversized moon the dominant feature of the starry background. Stage manager Jose Maria Condemi hit the ground running with his intelligent staging of the bandit’s chorus (under the direction of Chorus Master Donald Nally) whose jaunty singing generated audience applause. Licitra’s opening double aria exhibited the rich tone of one of the finest contemporary spinto tenors.

For the rest of the opera, we move indoors into the elegant interiors designed by Scott Marr. Elvira’s chambers are beautifully appointed with rich panels inspired by the Moorish designs of the Alhambra and large ornate wooden doors.

The most elegant setting was that of the main hall in Silva’s castle, in which his marriage to Elvira was to take place.

[Below: the great hall of Silva’s palace; edited image, based on a Dan Rest photograph, courtesy of the Lyric Opera.] 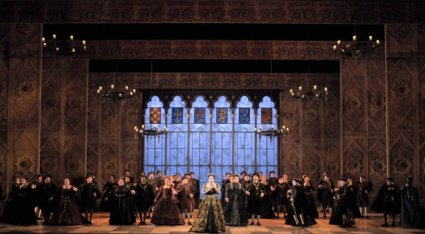 Every scene in “Ernani” is filled with infectious music, but the two most famous arias are Elvira’s Ernani, involami and Carlo’s O sommo Carlo! in which Daniel’s Carlo invokes the memory of the first great Holy Roman Emperor while standing on Charlemagne’s tomb at Aix-la-Chapelle (now Aachen, Germany).

In a coup de theatre (which no tourist will see in Charlemagne’s cathedral in Aachen) as Carlo stands on the tomb, it sinks into the ground as the church hierarchy enters the chamber to invest Carlo with the robes and symbols of the Emperor’s power.

Daniel’s Carlo, who had been Ernani’s (and Silva’s) rival for Leonora’s hand, withdraws from the pursuit of romance to concentrate on the pursuit of power and endorses the union of Elvira and Ernani.

[Below: in a rare moment of happiness, Elvira (Sondra Radvanovsky) and Ernani (Salvatore Licitra) look forward to a life together; edited image, based on a Valerie Bromann photograph, courtesy of the Lyric Opera.] 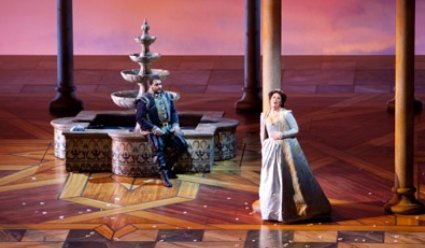 Verdi and Puccini scholar Julian Budden wrote in 1973 (in the first volume of his authoritative The Operas of Verdi) about the obsession with honor that motivates characters in Hugo’s play that had inspired the opera: “[The honor in Hugo’s Hernani] is more an obsessive pride which turns all the characters into giant egoists, swearing mutual vengeance for the most trivial causes, doing each other monstrous kindnesses, destroying themselves and each other to satisfy some whim of punctilio”.

With Verdi’s rousing music and skill at portraying the emotions of the moment, no matter how incomprehensible their behavior may be, the characters of Ernani, Elvira and Carlo can evoke sympathy, even from 21st century audiences.

The opera’s denouement requires the title character to commit suicide to fulfill an agreement he made with Silva earlier (who did not kill him earlier when he had a chance) deferring his death to a future time chosen by Silva. Although the imagery of the actual suicide order (sounding of the hunting horn that Ernani has provided him as a pledge of his honor) may seem a bit over the top to 21st century audiences, it is no less lethal than the Japanese emperor’s demand that Butterfly’s father dispatch himself, and it probably seemed slightly less of a risk to Ernani than, say, the pledge made by Calaf in Puccini’s “Turandot” that he would give his life if she were to guess his name.

[Below: Silva (Giacomo Prestia, standing) has just required that Ernani (Salvatore Licitra) commit suicide, to the dismay of Elvira (Sondra Radvanovsky); edited image, based on a Dan Rest photograph, courtesy of the Lyric Opera.] 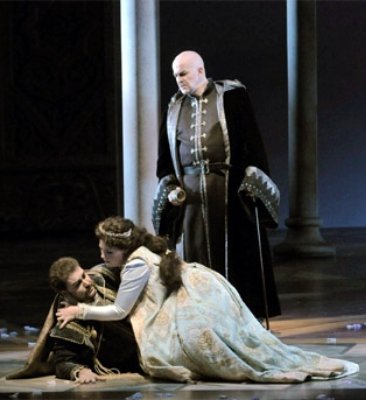 Silva is one of opera’s villainous characters, and Prestia received some good-natured boos from the Chicago audience, just as artists playing Pinkerton in Puccini’s “Madama Butterfly”, Claggart in Britten’s “Billy Budd” and Hagen in Wagner’s “Goetterdaemmerung” can expect some affectionate hissing and booing from an American audience, if they have played their part with sufficient malevolence.

The Lyric’s production was an unqualified success musically, dramatically, and visually. I highly recommend it to all opera goers, and especially to those with a high regard for Verdi operas performed well.