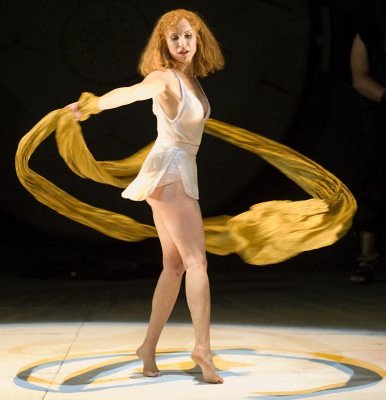 Performances of Richard Strauss’ “Salome”, which can still be made to look very wicked even a century and half a decade after its scandalous (and lucratively successful) first performances, can be memorable. Those with long memories of performances of this work at San Francisco Opera will recall some of the most exciting afternoons and evenings at the War Memorial Opera House.

Having myself experienced virtually all the casts and productions since Anja Silja starred in Wieland Wagner’s provocative 1968 staging, I would not utter the words “This was the best ever” until I had a chance for the excitement that gripped the War Memorial on Sunday afternoon to subside and to think contemplatively about all of the performances I had experienced. I have done so, and can report calmly that this was the best “Salome” ever in San Francisco, at least in the last four decades – and San Francisco is a house that has a history of doing this opera very, very well.

I will advance four reasons for my conclusion. The first was the extraordinary performance of debuting German soprano Nadja Michael. Of at least equal rank to Michael’s performance was the conducting of Nicola Luisotti, his first time for this opera. The other two reasons are  the searing Jokanaan of Greer Grimsley, and director Sean Curran’s choreography of Salome’s “wilden Tanz“.

Michael, only four years a dramatic soprano after a career as a mezzo-soprano, has a powerful and mature voice with a secure command of the upper range of the role, and the ability to sing the low notes that lie below the comfort zone of many mezzos. Her large voice is inherently beautiful and she controls it superbly.

She is also stunningly attractive and has a good figure, attributes always a plus for an opera singer, but particularly welcome for a role that is supposed to be so attractive that a ruler will offer half his realm if she will strip for him. And, to make it a complete package, she is a persuasive actress and can dance seductively and erotically.

[Below: Salome (Nadja Michael) achieves her objective of kissing Jokanaan’s severed head, only to be summarily executed in the next moment; edited image, based on a Cory Weaver photograph, courtesy of the San Francisco Opera.] 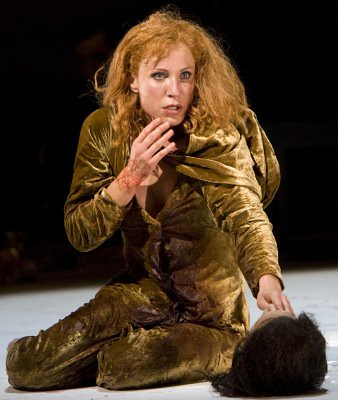 Grimsley had appeared only in two other roles at San Francisco Opera previously. He was Scarpia for four late season “second cast” performances of Puccini’s “Tosca” early in 2002 and played the important comprimario role of Monterone in the production of Verdi’s “Rigoletto” that new General Director David Gockley added as a last minute replacement for another production in his first season in San Francisco.

Yet, Grimsley’s appearances as Jokanaan for six performances of the main subscription series had the feel of a San Francisco Opera debut. Though not a particularly lengthy role, as the stern voice of morality in a dissolute sovereignty, only Salome is a more important role in this opera. Grimsley’s performance was electrifying.

[Below: A tethered Jokanaan (Greer Grimsley) is brought out of a cistern on Salome’s command; edited image, based on a Terrence McCarthy photograph, courtesy of the San Francisco Opera.] 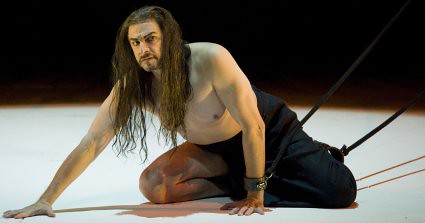 Sean Curran’s artistic reputation was built to an important extent on his choreography, and it is fitting that the opera he has chosen for his directorial debut is one in which a dance by the character in the title role is a dramatic highlight. The opera’s score and libretto refer to “Salome’s Tanz” or “wilden Tanz”. (The association of the dance with seven veils shed one by one  is a separate and inauthentic tradition.)

For most of Curran’s dance, Michael is in a brief undergarment, rather like a teddy, and she dances and poses with a series of large sheer textiles of various colors, with the assistance of two slinky male assistants (played deliciously by San Francisco Opera resident corps ballet dancers Bryan Ketron and Michael Kruzich), who draw each large cloth out of a small basket to introduce into the dance at the proper moment.

In the rousing end of the dance, we do not see her, as in past productions in San Francisco, nude (or, alternatively, encased in a body stocking with feminine attributes painted on). We see the contours of her body pressed against the last of the large textiles, but that is enough for us to believe that the Herod (Kim Begley) is in a fit of ecstasy.

[Below: Salome (Nadja Michael) dances for the Tetrach Herod; edited image, based on a Terrence McCarthy photograph, courtesy of the San Francisco Opera.] 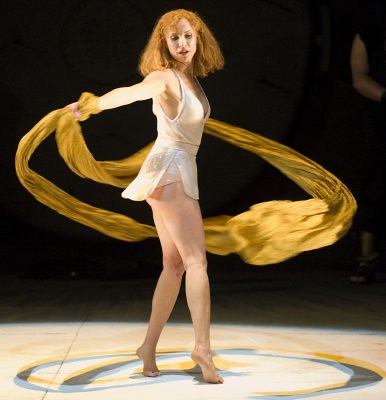 Luisotti’s first four conducting assignments in San Francisco have been Italian operas, but with his first “Salome” ever, San Franciscan Opera patrons are being introduced to his insights into the core German repertory. (In future seasons he is planning to conduct Wagnerian, Russian and French opera as well.)

My previous reviews of Luisotti have highlighted his physical style of conducting, but it is the resulting sound that the conductor produces from his assembled orchestra, chorus and principal artists on which judgment must be made.

One could make the case that the large War Memorial Opera House with its open orchestra pit is an ideal venue for this opera with its outsized orchestra. The acoustics are brilliant and handle a large sound wonderfully, and Michael and Grimsley have the large voices that can soar over the orchestra playing fortissimo.

Yet Luisotti in his programmatic finds the opera to be “quiet”, a series of conversations between characters (several of whom, admittedly, are deeply in need of pyschiatric assistance). As with his Verdi, Luisotti’s conducting of Strauss gives the singers the time and space for their words to be heard. He also is firmly committed to the proposition that, for all of its dissonances that shocked and amazed the first night audiences 104 years ago, “Salome” is enveloped in constant, luscious melody, not a single one which Luisotti will let slip by the audience’s notice.

[Below: Conductor Nicola Luisotti; edited image, based on a Terrence McCarthy photograph, courtesy of the San Francisco Opera.] 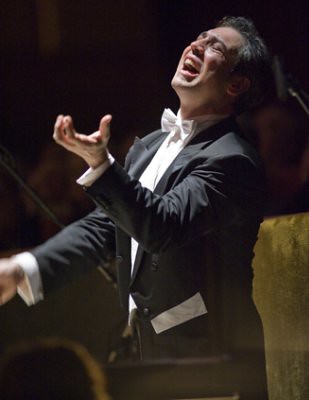 The new production, whose costs were shared with the Opera Theater of Saint Louis and Opera de Montreal, consisted of an unambitious unit set (“Salome” has only one scene) and unpretentious costumes, but that was o.k.

The supporting cast was a strong one. Former Metropolitan Opera Lindemann Young Artist Garrett Sorenson made a fine impression as Narraboth, a tortured soul in a position of authority in this bizarre court. The page boy whose desire was to divert Captain Narraboth’s sexual obsessions from Salome to himself was played by Elizabeth DeShong.

The soldiers were Andrew Funk and Bojan Knezevic, the Cappadocian was Adler Fellow Kenneth Kellogg. Julien Robbins and Austin Kness were the two Nazarenes, and Beau Gibson, Robert MacNeil, Matthew O’Neill, Corey Bix and Jeremy Robbins were the Five Jews.

[Below: Salome (Nadja Michael) convinces a wary Narraboth (Garrett Sorenson ) to bring Jokanaan from his place of captivity to her; edited image, based on a Cory Weaver photograph, courtesy of the San Francisco Opera.] 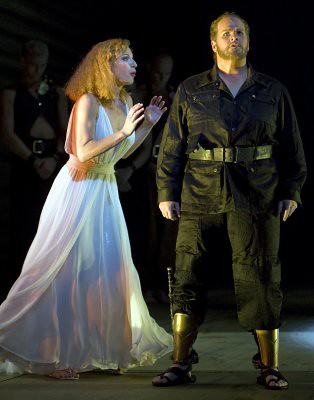 Exploiting Narraboth’s sexual obsession with her, Salome offers him the promise of giving him a flower in exchange for his violating his orders to keep Jokanaan imprisoned in a cistern. Such a risky endeavor assumes Salome will use her opportunity with the utmost of discretion, but when she grovels on the floor with the tethered (and quite unimpressed) Jokanaan, Narraboth knows his life is now worthless. Although Grimsley’s  Jokanaan gestures for him not to do so, Narraboth commits suicide.

[Below: Salome (Nadja Michael) gets her wish to have Jokanaan (Greer Grimsley) brought to her; edited image, based on a Cory Weaver photograph, courtesy of the San Francisco Opera.] 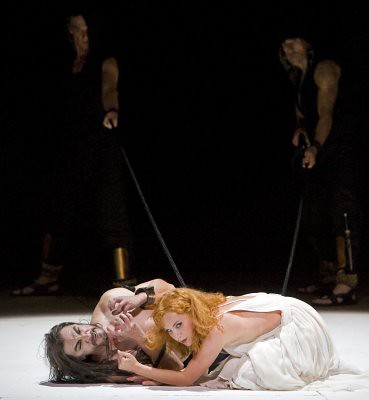 The parts of Herod and Herodias are often reserved as late career star turns for famous artists whose vocal skills are now best suited to opera’s great “character roles”.  In 1974 Leonie Rysanek’s Salome was parented by Hans Hopf and Astrid Varnay, surely the most depraved Herod and Herodias ever to seen on a San Francisco stage. Not even Rysanek’s own “late career” Herodias bested Varnay’s. Richard Lewis and James King were among the Herods and Helga Dernesch was another illustrious Herodias.

In this performance, Kim Begley was the Herod and Irina Mishura (whose 2005 Adalgisa in Bellini’s “Norma” is reviewed on this website) was the Herodias. Both are in the prime of their careers, although both are mixing these mature character roles in with their core repertory roles. Neither yet fits the description of “late career character actors”. Their performances were world class, although, to my taste, insufficiently lascivious to rank them with some of their predecessors in “late career” performances of these parts at San Francisco Opera. 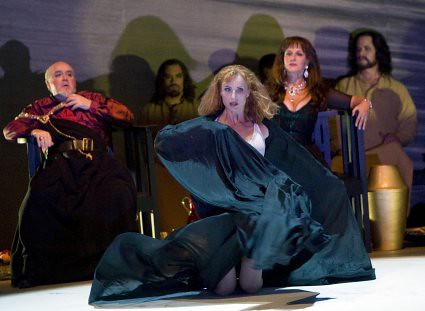 This is a performance that will thrill opera goers who like the big Germanic sound of Wagner and Richard Strauss, but I also commend it to those whose tastes are for beautifully sung, melodic opera. Just as Luisotti’s “Trovatore” was a different and better sound than one may be used to, so is Luisotti’s “Salome”. For those who have or are able to secure tickets to any of the final five performances, this should not be missed.