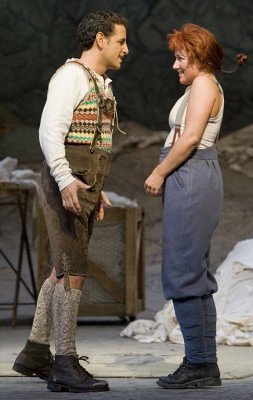 [Below: Marie (Diana Damrau) attends to the 21st Regiment’s laundry and ironing; edited image, based on a Cory Weaver photograph, courtesy of the San Francisco Opera.] 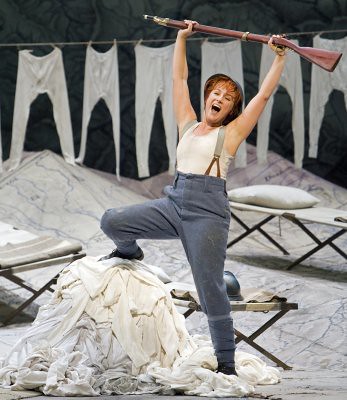 It was the occasion for both the company and role debuts of German coloratura soprano Diana Damrau, as well as Peruvian tenor Juan Diego Florez’ second operatic role in San Francisco after an absence of half a decade.

[Below: Marie (Diana Damrau), who operates a canteen for the 21st French Regiment is with her local love interest, the Tyrolean Tonio (Juan Diego Florez); edited image, based on a Cory Weaver photograph, courtesy of the San Francisco Opera.] 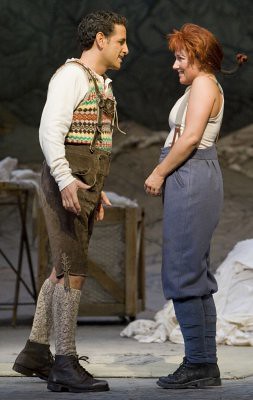 There was a substantive difference between in this performance of “Fille” and what is normally heard in the United States. In the typical American performance, the arias are sung in French and the spoken dialogue is presented in vernacular English (exactly as was done in the current production of Mozart’s “Abduction from the Seraglio”, the opera currently in rotation with “Fille”.) This gives abundant opportunity for topical jokes to be insinuated into the dialogue.

In the Pelly production, the spoken dialogue throughout the opera was in French. There indeed were topical jokes, ranging from references to the International Olympic Committee, to the military’s “don’t ask, don’t tell” policy. But only an occasional phrase was in English, usually uttered as part of the hysterically funny performance of San Francisco Opera veteran Sheila Nadler in the non-singing role of the Duchess of Krakenthorp.

Of course, the jokes were translated by the supertitles, and a few of the audience would be expected to understand both early nineteenth century and contemporary hip Parisian humor, but it is neither the typical way “Fille” is performed here, nor is it likely to replace the practice of performing English translations of the French in the future. But Pelly is Pelly, and it is always interesting to see and hear things done his way.

The basic set, by Pelly’s long-time collaborator Chantal Thomas, consisted of an uneven surface (apparently required in any Pelly-Chantal endeavor) backed by  large jagged maps of different perspectives. The French Army has invaded the Austrian Tyrol for some reason or another, so the first scene is a clutter of the local inhabitants’ wagons, farm equipment  and miscellaneous possessions, as they don various kitchen utensils as protective headgear.

[Below: the 21st Regiment of the French Army has arrived in the Tyrol; edited image, based on a Cory Weaver photograph, courtesy of the San Francisco Opera.] 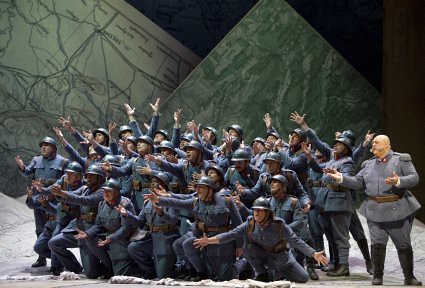 The regimental mascot – in Pelly’s version the workhorse, a quartermaster’s dream – is Marie (Damrau). The invasion of the Tyrol has taken enough time for Marie to fall in love with a Tyrolean native, Tonio (Florez).

In Donizetti comedies, love-struck men of the local peasantry, whether it is the army’s native land or the enemy’s, are apparently a major source for recruiting new blood, so halfway into the first act, Tonio doffs his lederhosen for French army blues. (Because he wants to marry the regiment’s “daughter”, he enlists and pleads with the regiment’s members to support his bid to wed her.)

[Below: Tonio (Juan Diego Florez) has just enlisted in the army that has invaded his homeland; edited image, based on a Terrence McCarthy photograph, courtesy of the San Francisco Opera.] 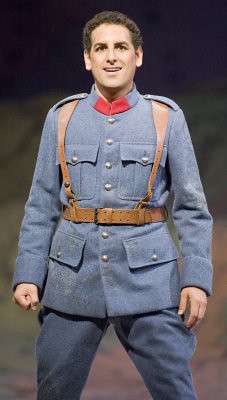 Florez’ voice is of as light a weight as any superstar tenor of our day, and the War Memorial with its open orchestra pit is daunting for a voice that would seem more comfortable in a cozier house such as that of the Zurich Opera, where he often appears. But he is an affecting, as well as athletic and agile, performer with a brilliant sound and he clearly established a rapport with the San Francisco audiences.

Tonio sings the most famous number in the piece, the extended set of arias beginning with O mes amis. The aria set concludes with the nine high “C’s” that caused Tonio to become one of Luciano Pavarotti’s most celebrated roles in the 1960s and 1970s. As is almost invariably the case in “Fille” performances, Florez, the Tonio, received the most sustained ovation of any individual number in the opera. (A well known Marie has argued that it is her role that in totality has the most difficult music in the opera, but no one can deny that Tonio has the showpiece.)

But no opera, comic or tragic, can exist only on a “girl meets boy” theme, without complications, which come through the Marquise of Berkenfeld (Meredith Arwady) arriving to reveal that Marie is of aristocratic blood and must come with her for proper training. For the second act, a few sketchy structures added to the basic set comprise the Berkenfeld estate, setting up the second most famous “music lesson” in bel canto opera.

Arwady, who, although a alumna of the San Francisco Opera Merola program, did not make her San Francisco Opera debut until this Fall (in Puccini’s “Suor Angelica” and “Gianni Schicchi).  With a secure contralto and comic flair, she has staked out a portion of the operatic repertory of which, at any period of time, there seem to be few singers to assay its roles.

[Below: The Marquise of Berkenfeld (Meredith Arwady) points out that one of the worst aspects of war is that it distracts the people from showing proper respect for the aristocracy; edited image, based on a Terrence McCarthy photograph, courtesy of the San Francisco Opera.] 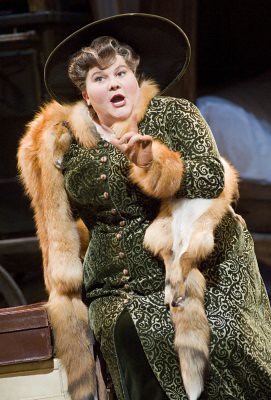 Of course, being only a marquise she has the agony of being at the mercy of the preferences of a duchesse. The Duchess of Krakenthorp, a non-singing role, was assigned to Sheila Nadler, who had made her San Francisco Opera debut 41 seasons earlier. Even those with memories of film actress’ Hermione Gingold’s Krakenthorp to Beverly Sills’ Marie in 1974, would likely concede that Nadler’s performance was truly funny.

[Below: the Duchess of Krakenthorp (Sheila Nadler) intends to have the last word on aristocratic proprieties; edited image, based on a Cory Weaver photograph, courtesy of the San Francisco Opera.] 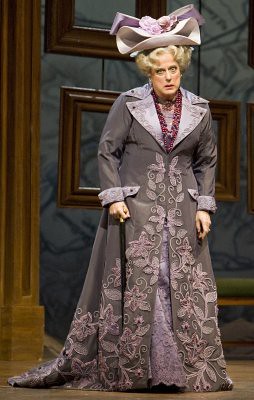 The Sulpice was Bruno Pratico (as he was in Houston’s production of the opera, reviewed on this website.) Pratico is a solid Sulpice, whose many delights include the terzetto with Damrau’s Marie and Florez’ Tonio.

[Below: Marie (Diana Damrau) shows affection to Tonio (Juan Diego Florez), with the approval of Sergeant Sulpice (Bruno Pratico); edited image, based on a Cory Weaver photograph, courtesy of the San Francisco Opera.] 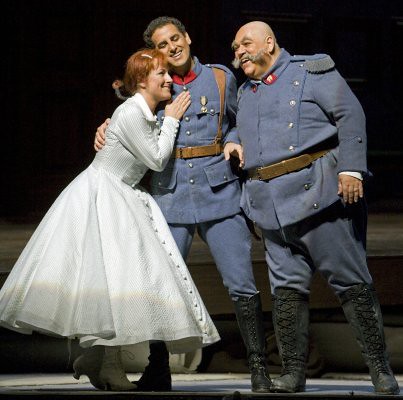 For the opera’s climax, it is, of course, the regiment coming to the rescue, liberating Marie, with the aid of a tank, from the horrors of a life of leisure.

[Below: Marie (Diana Damrau), in her wedding dress for a different purpose, puts it to good use by marrying Tonio, as she salutes with the 21st Regiment; edited image, based on a Cory Weaver photograph, courtesy of the San Francisco Opera.] 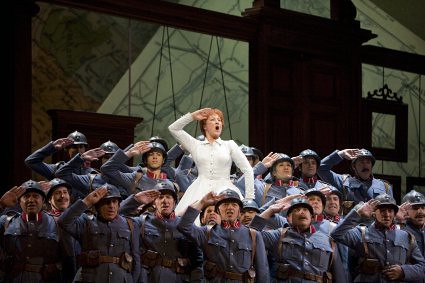 The Ukrainian conductor Andry Yurkevich led a spirited performance. The secondary roles Hortensius and the Corporal were played by Jake Gardner and Kenneth Kellogg respectively.

The most memorable part of a great performance of Donizetti’s cheerful and melodic opera, however, was the debut of Diana Damrau. Possessing an agile coloratura voice, physical beauty, and athletic grace, her most striking feature in this role was her deeply expressive exposition of Marie’s vulnerability, in a superbly controlled and expressive voice. At opera’s end, Damrau received a standing ovation from the enthusiastic audience. This is a performance that lovers of bel canto comedy should go out of their way to experience.