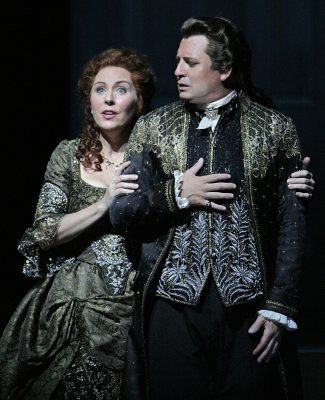 During the 65 years that spanned the first three general directorships of the San Francisco Opera, Mozart’s “Die Entfuehrung aus dem Serail”, usually translated as “The Abduction from the Seraglio”, was never presented by the main company. Since 1990, it has been mounted in two productions in three separate seasons. The second of these is this year’s new co-production with the Lyric Opera of Chicago, seen there last March, and debuting in San Francisco in late September.

Its San Francisco appearance provided an opportunity for the American debut of young German conductor Cornelius Meister. I attended the last of the five performances for which Meister was scheduled, by which time he had clearly bonded with the San Francisco Opera orchestra, whose members know how to signal which conductors they regard with more than routine affection.

Still in his late 20s, Meister is only a couple of years older than the age Mozart wrote the piece, but neither the efforts of the composer nor the conductor should be dismissed as anything other than a brilliant work of art. Meister’s masterful Mozart shows a maturity in his approach to conducting that dignifies as much as it enlivens this opera. 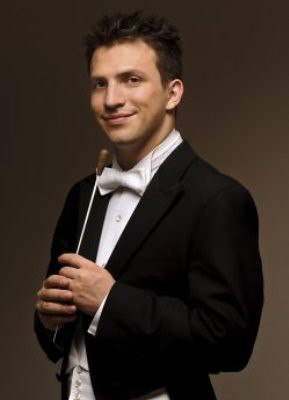 “Entfuehrung” is, after all, the theatrical work that Mozart’s contemporaries would have known best of his operatic efforts. It was written only 13 years before “Die Zauberfloete”, which  two centuries later is often regarded as his masterpiece. It abounds in arias and ensembles that Mozart could have placed into the later work without them seeming out of place, had “Entfuehrung” been a failure, rather than the great success it was.

Often, “Abduction” has been presented on too small a scale for a major opera house. The 2009 new production, by Chas Rader-Shieber and his production designer David Zinn (neither of whose work has been seen at San Francisco Opera previously), creates a stage set that does homage to the styles of theatrical scenery with which Mozart would have been familiar, but which is large enough to use the War Memorial Opera House stage impressively, with curving walls and ceilings and interior designs surrounding upper floor boxes at stage left and right.

[Below: a chorus of Janissaries hail the return of the Pasha and Constanze from an excursion; edited image, based on a Cory Weaver photograph, courtesy of the San Francisco Opera.] 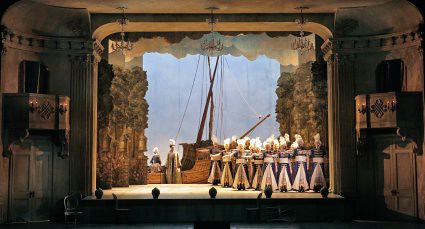 “Entfuehrung” has five singing roles and a speaking role. The two members of the Spanish nobility, Constanze and her fiance,Belmonte, from whom the fates have separated her, were played respectively by Mary Dunleavy and Matthew Polenzani.

Stage actor Charles Shaw Robinson was the Pasha Selim. In this production, all of the spoken dialogue was translated into English (by Philip Kuttner). Supertitles in English were provided for both the sung German and spoken English. All of the principal singers, who one expects would have much less experience in theatrical declamation than a veteran such as Robinson, dispatched their lines with aplomb.

[Below: the Pasha Selim (Charles Shaw Robinson) is angered by his inability to have his feelings for Constanze (Mary Dunleavy) reciprocated; edited image, based on a Cory Weaver photograph, courtesy of the San Francisco Opera.] 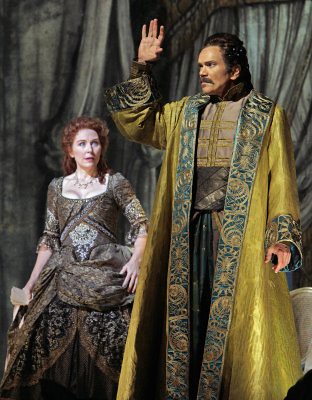 The comic trio were led by Peter Rose as Osmin, Adler Fellow Andrew Bidlack as Pedrillo and Anna Christy as Blonde. Rose returned to San Francisco after a 17 year absence, although he was a stunningly effective Claggart in Paul Curran’s superlative production of Britten’s “Billy Budd” at the 2008 Santa Fe Opera summer festival. 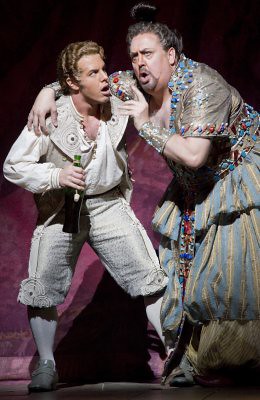 Bidlack was an amusing Pedrillo, his leggiero tenor voice carrying well in the vast spaces of this opera house. The high point of his portrayal was the lute-accompanied song that is meant to be the signal for both the aristocratic and comic pair of Spanish lovers to escape from the harem.

In the soubrette role of Blonde, Anna Christy gave a vivid portrayal of this thoroughly likeable minx, the elder sister of decades of indomitable representatives of the “weaker sex” portrayed in opera.In Rader-Shieber’s conception, Blonde is surrounded by Osmin’s guards, who find her thoroughly enchanting and are without resistance to her spells.

[Below: Blonde (Anna Christy) attracts and distracts Osmin’s guards; edited image, based on a Cory Weaver photograph, courtesy of the San Francisco Opera.] 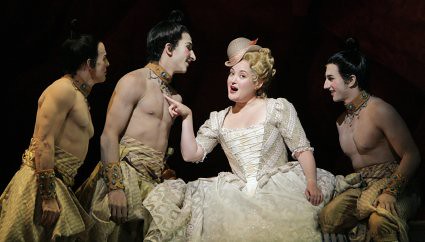 Dunleavy, who sang the Queen of the Night in “Magic Flute” in San Francisco, and who last appeared in San Francisco as Gilda in the 2006 production of Verdi’s “Rigoletto” reviewed on this website, was a steadfast Constanze, combining the lyrical and coloratura aspects of this classic Mozartean soprano role.

Polenzani, whom I had liked in my review of the Los Angeles Opera “Zauberfloete” in January, 2008, was a brilliant Belmonte. The infectious melodies of Belmonte’s arias were delivered with flair.

[Below: Constanze (Mary Dunleavy) is reunited with Belmonte (Matthew Polenzani); edited image, based on a Cory Weaver photograph, courtesy of the San Francisco Opera.] 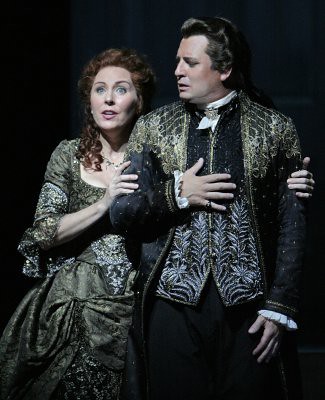 Those unfamiliar with the charms of “Entfuehrung” should get to know the extended passages in which Belmonte and Pedrillo ask their respective sweethearts the indelicate question: “While you were in the harem, did you, uh, do anything?”. Here is Mozart’s music in its most charming form, particularly when the vexed Blonde asks Pedrillo, when he was around the harem, did he, uh, . . .

[Below: Constanze (Mary Dunleavy, left) and Blonde (Anna Christy) are outraged at their men’s questioning their fidelity during their captivity in the pasha’s harem, while the men, Belmonte (Matthew Polenzani, far right) and Pedrillo (Andrew Bidlack) figure out that they have crossed a line; edited image. based on a Cory Weaver photograph, courtesy of the San Francisco Opera.] 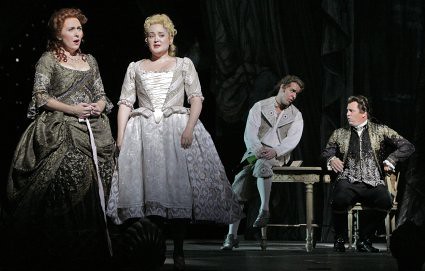 Was Belmonte a callous oaf to doubt Contanze’s constancy? Rader-Shieber, near the end of the opera, introduces a note of “Cosi fan Tutte” ambiguity, in which Constanze, supposedly on her way with the three companions whom the Pasha has freed, opens a side door to gaze silently at the Pasha for a few moments, then closes the door and leaves.

An opera company may not need to have its own production of “Entfuehrung aus dem Serail”, but it is an important enough work for every company to have access to a fundamentally sound production for a revival every few years. This joint effort by the Lyric Opera and the San Francisco Opera assures that these companies, and others with whom it might be shared, will have an attractive stage setting on which to mount some of Mozart’s most wonderful music.