The Los Angeles Opera presented the third production of the Achim Freyer’s conceptualization of Wagner’s “Ring of the Nibelungs”. Conducted by James Conlon and starring John Treleaven as Siegfried, Linda Watson as Bruennhilde and Vitalij Kowaljow as the Wanderer, it proved a musically strong performance. Continuing  Freyer’s vivid imagery, it provided another opportunity to watch the 18 person Ensemble of actors and dancers in the myriad of activities that comprise this complex production.

Production Notes on Act I

Unlike Freyer’s previous productions of “Rheingold” and “Walkuere”, much of whose action takes place on a circular disk at center stage, the set of “Siegfried” is a linear space, traversing the Los Angeles Opera stage, marked by even rows of white neon lights. Throughout the evening’s three acts, the spaces between each row of lights were pathways for Ensemble members (almost always one at a time) to cross the stage from West to East.

“Ost”, the German word for the latter direction – we recall from the risk assessments made by the Walkueren in Act II of “Die Walkuere” – was considered the area least likely to be visited by Wotan. In the Ost’s center is the Neidhoehle, where Fafner has guarded the Ring and Rhine Gold for four decades or so, watched by Alberich and by Mime also.

Mime (Graham Clark), frustrated by both his inability to reforge the broken pieces of the sword Nothung and by his failure to control Siegfried’s adolescent misbehavior, stamps his feet to the rhythm of the orchestra’s representation of a Nibelung smith’s hammering.

[Below: Mime (Graham Clark,  front) is disturbed by the appearance of the Wanderer (Vitalij Kowaljow, above), as one of Wotan’s ravens sits at the front of the stage; edited image, based on a Monika Rittershaus photograph, courtesy of the Los Angeles Opera.] 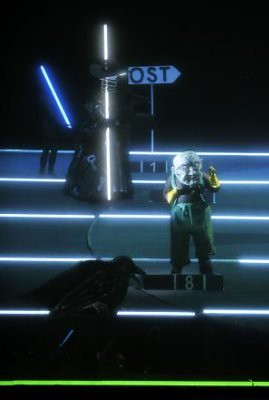 As the riddles are asked, with their abundant opportunity to present backstory from the first two “Ring” operas, the center linear neon borders shift from parallel to perpendicular lines as the circular center stage disk revolves. Images of Alberich and of Sieglinde and Siegmund move through the lighted paths.

Failing to stump the Wanderer and thus to be able to behead him, the frightened Mime now understands that there was a quid pro quo contained in the agreement. He is unable to answer the Wanderer’s third question – who has the power to reforge the Nothung pieces? – thus forfeiting his head to a “person without fear”.  Rapidly reinventing his strategic options, Mime at long last lets Siegfried know the circumstances of his birth and about the Nothung shards. In the Freyer style, as Mime describes finding the dying mother and her baby, an Ensemble member carries the image of a baby Siegfried across the stage. Mime’s new plan is to have the fearless Siegfried forge the sword, kill the dragon and then die of poison at Mime’s hand.

Siegfried then takes it upon himself to forge the sword. In Freyer’s conception this takes place solely with hand and arm gestures, that cause neon lights to move in various directions. Siegfried takes off for Fafner’s Neidhoehle to end Act I.

[Below: Siegfried (John Treleaven) forges together the pieces of the sword Nothung; edited image, based on a Monika Rittershaus photograph, courtesy of the Los Angeles Opera.] 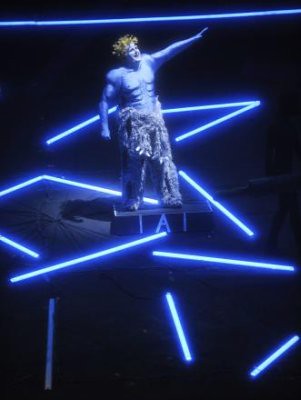 The circular disk becomes the center of the activities of the rest of the act. Siegfried slays the dragon, who reappears as the now dying giant Fafner (Eric Halfvarson). Siegfried accidentally tastes the dragon’s blood and finds he can understand the Woodbird (nicely sung by Stacey Tappan). The  blood also allows Siegfried to hear Mime’s murderous thoughts. Possessing hands that have just reforged a sword without aid of tools, only a slight gesture is needed to effect Mime’s beheading. 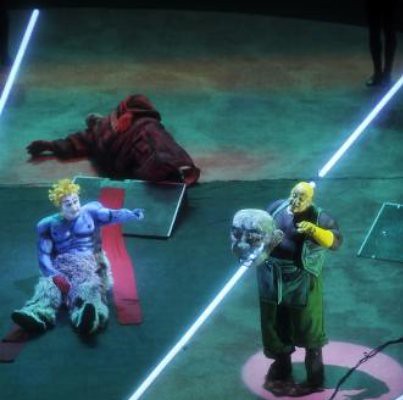 In one of the ingenious Freyer insights, the Woodbird and Wanderer appear together as a single entity, making it clear that the Woodbird is Wotan’s agent, who provides Siegfried with the information he needs to find Bruennhilde.

That Freyer regards the “Ring” characters as beings from alien cultures seems certain, and the appearance of the body forms and costuming of several of the characters, especially the gods, and among that group, particularly the females, there are several quite bizarre images. Erda, as we recall from “Rheingold” is a multi-armed creature in an especially unbecoming costume.

Wotan and Erda exchange insults, and we get our first indication of what Erda’s daughters, the Three Norns, will look like in the first act of “Goetterdaemmerung” when the final production in the Freyer “Ring” is first performed in April, 2010.

After Siegfried destroys the power of the man (Wotan) who attempts to bar Siegfried’s way to his sleeping beauty, we  then are transported to the scene of the Walkuerenritt in the third act of “Walkuere”. The Freyer Valkyries’ half horse, half bicycle contraptions still form part of the Magic Fire.  The multi-armed god Loge reappears briefly. Siegfried fights his way through the fire.

[Below: Siegfried (John Treleaven) crosses the magic fire to  Bruennhilde’s rock; edited image, based on a Monika Rittershaus photograph, courtesy of the Los Angeles Opera.] 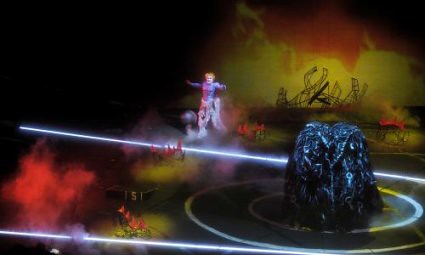 Siegfried, splitting what at first seems to be a large rock, cuts the armor away from Bruennhilde. The ensuing love duet between Siegfried and Bruennhilde (Linda Watson), one of Wagner’s most wondrous passages, was beautifully sung by Watson and Treleaven. The latter, who had paced himself through the three acts,  seemed to tire a bit just at the very end, but it was an extraordinary performance, fully realizing the promise he showed when he sang Wagner’s Tristan in early 2008 at the Los Angeles Opera.

[Below: Bruennhilde (Linda Watson) and her horse Grane are awakened by Siegfried (John Treleaven); edited image, based on a Monika Rittershaus photograph, courtesy of the Los Angeles Opera.] 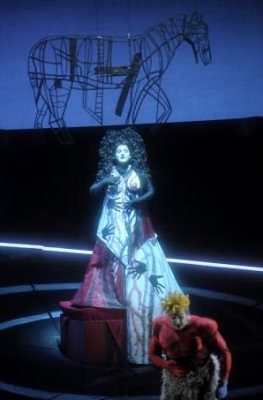 One can evaluate the performance from several criteria. In a music drama in which the orchestra assumes a predominant role, the success of the orchestra in matching Wagner’s intent is unquestionably a criterion of high importance. James Conlon conducted the Los Angeles Opera Orchestra, whose normally excellent sound was further enhanced by modifications to the orchestra pit cover that allowed the orchestra’s sound to be heard without the sense of the orchestra being partially muffled.

A third criterion, as important for this reviewer, as the quality of the casts, orchestra and conducting, is fidelity to the intent of the opera’s composer. I have made the case that Freyer’s conceptualization follows the story-line quite closely. Of course, Freyer unabashedly departs from what might be described as a cinematic presentation of the “Ring”, with scenic backgrounds and costumes that are deemed to represent a specific period in human pre-history. Certainly the Seattle Opera’s Stephen Wadsworth “Ring”, itself a world treasure, exemplifies this very legitimate approach to Wagner’s epic tetralogy.

Thoughts on the Achim Freyer “Ring”

Even those Wagnerians whose preference for a more cinematic “Ring” is intense,  if studying the Freyer approach without preconceptions, might concede that it demonstrates Freyer’s deep affection for every line of the text. (His misunderstood remark that some day he would like to stage Wagner’s “Ring” without its music, was meant as a heartfelt compliment to Wagner’s genius as a librettist and story-teller, rather than as a denigrator of Wagner’s incomparable musical achievement.)

Even though I have described my take on the Freyer approach in previous reviews,  just as Wagner himself never tired of explaining what has happened before our eyes in different words at different times, I will again offer my explanation of at least some of the mysterious onstage events.

A primary feature of Freyer’s approach is that each character has an image, one that is reflected in that character’s costume, that we can describe as independent of the artist who sings the role.  When we see someone onstage dressed as Siegfried, it might be John Treleaven, who sings the role of Siegfried and is dressed in his costume, or it might be a member of the Ensemble who is Siegfried’s avatar, ready to represent Siegfried whenever Freyer’s production calls for it. But in what ways does  Freyer production need Siegfried avatars, in place of Treleaven himself? If we consider how Wagner incorporates the idea of Siegfried into the “Ring”, we can better understand what Freyer’s ensemble is doing.

“Siegfried”, with only eight characters, has the smallest cast of any “Ring” opera. For purposes of analyzing the Freyer approach we might divide these eight characters into as many as five groups. The first category  are the characters who re-appear in much they same forms as we saw them in “Rheingold”. This includes the brothers Alberich and Mime and the goddess Erda. In Freyer’s approach they basically reappear in their “Rheingold” costumes.

Category two includes a character from “Rheingold”, the giant Fafner, who has a different appearance in “Siegfried’ than in “Rheingold”. In the later opera Fafner has been transformed into a dragon. The Freyer Fafner, almost might be included in the “unchanged from ‘Rheingold’ group” since we only see a little puppet of the Fafner, and his corpse appears dressed as the giant Fafner, although with scales on his back suggesting that it is best he stay in his unique category.

Category three is a character from “Walkuere”, Bruennhilde, who finds herself transformed when she is awakened in “Siegfried”. Category four is the Wanderer, whom we the audience (and Alberich and Mime, as well) know is Wotan, who wears a disguise when on Earth. Finally, category five consists of two other characters, Siegfried and the Woodbird (or, if you prefer, Forest Bird, since there apparently will never be consensus as how to translate the German name of this genus into English), neither of whom, at least according to Wagner’s libretto, appears in a previous “Ring” opera.

My qualifier at least according to Wagner’s libretto to my statement that the category five characters do not appear in a previous “Ring” opera gets to the heart of the Freyer concept. At the end of “Walkuere”, the idea of Siegfried the fearless hero fighting his way through the magic fire is introduced when Wagner’s leitmotiv of Siegfried is intermingled in the orchestra with the leitmotiv of the magic fire that encircles Bruennhilde’s rock.

In Freyer’s “Ring”, when a leitmotiv of a character sounds in the orchestra, one of the Ensemble members appears onstage in that character’s costume, even if the libretto does not call for that character to appear in that act or even in that opera.

That’s not all. The orchestra is there to supplement the story-telling, but it is the words of the libretto that has the main responsibility for relating the storyline. Wagner’s libretto abounds in a rich language that is  illuminated by Freyer’s supplementary imagery. There are a couple of places in “Siegfried” in which reference is made to the natural reflections of the characters (in this land where mirrors do not exist). When Siegfried speaks of seeing an image of himself in the water, in fact another Siegfried rhythmically moves onstage to portray his reflection. When Bruennhilde later speaks of both her reflection and Siegfried’s, Ensemble members, dressed in Bruennhilde and Siegfried costumes, move into place as their reflections.

No matter how many times one sees the “Ring”, every time one sees it performed, one finds more in it. I was personally struck by the importance that Freyer placed on the little piece of Siegfried’s dialogue with Mime in which he discusses what it might be like to fear something. Wagner gives us a hint as to what will later cause fear in Siegfried (falling in love with Bruennhilde) by playing Bruennhilde’s Magic Fire music in the Orchestra, But the Freyer production goes beyond Wagner’s libretto.  The flickering flames of the Magic Fire are seen as Siegfried speaks the words. This repeated reinforcement of an idea through music, words and imagery is powerful indeed.

We are three quarters through the Freyer “Ring”, with the “Goetterdaemmerung” scheduled for early April, and three complete “Rings”, each over nine-day periods, scheduled in May and June, 2010.