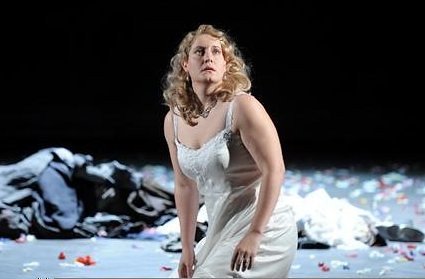 William: I had the opportunity in Santa Fe to conduct an interview with Elza van den Heever, at whose San Francisco Opera stage debut I was present in June 2007, and who was Santa Fe’s Donna Anna in this summer’s presentation of Mozart’s “Don Giovanni”. With virtually all artists I interview, we discuss various milestones in their careers and future plans.

Some personal comments introducing the interview

I was a reviewer of the first major onstage appearance in Ms van den Heever’s brief, but – to date –  illustrious, career.  That stage debut occurred under unexpected and quite trying circumstances. She replaced another artist in a production conceived by one of my favorite stage directors (David McVicar), conducted by one of my favorite conductors (Donald Runnicles). No explanation was given why the one artist was replaced, and one is not usually expected in these situations.

But she replaced the other singer after the final dress rehearsal. Although San Francisco is not normally considered a “conspiracy theory” town, the fringe media proposed dark and sinister motivations on the part of operatic management.

A Berkeley newspaper permitted a column to be published that suggested that since van den Heever was a white South African replacing an African-American singer it was because Pennsylvania-born general manager David Gockley, who had last worked in Texas, couldn’t allow a black singer to perform in a major role on the opera stage.

A weblog then announced that it was not racism on the part of the opera company, that it was management spinelessness. It observed that van den Heever had signed with a “powerful” agent, Matthew Epstein, Vice President of the Columbia Artists Management, Inc. (CAMI), and surmised that Epstein had decreed that van den Heever be installed as the Donna Anna, even though the final dress rehearsal had already taken place. In this imaginative scenario, Conductor Donald Runnicles and General Director Gockley were powerless to prevent Epstein from having his way.

(CAMI represents at least 37 of the artists whose opera performances this website has reviewed in recent years, including Deborah Voigt and Dolora Zajick, but I am unaware of any evidence that Epstein or anyone at CAMI is able to dictate to opera companies whom they may or may not cast.)

Just stating the unsophisticated arguments that were advanced is sufficient for the reader to understand why the San Francisco Opera has never responded to them, and properly so. However, opinions – even those based on misinformation – expressed on the Internet can be around for a long time, so I consider it appropriate for a refutation of such ill-advised statements to be posted as well.

No matter how easily refuted, the remarks at that time were hurtful, and added to the tension on that opening night of the San Francisco Opera’s June 2007 season. Despite these distractions, van den Heever was triumphant. (For my review, see: Kwiecien Excels in McVicar’s Dark Side “Don Giovanni” – S. F. June 2, 2007.)

A Conversation at the Santa Fe Opera “Ranch”

The interview was to begin under the open air canopy at the Santa Fe Opera ranch. But a roving New Mexico thunderstorm forced us to move the interview into one of the surrounding buildings (and, regrettably, cut into the scheduled interview time).

Wm: How did you become interested in performing in opera?

EvdH: It was not a conscious decision. I am from Johannesburg, South Africa and my first language and my heritage is Afrikaans, a community in which participation in church and school choirs is very much part of the culture. Since I was three years old, I was taking recorder lessons or other musical training.

But it takes a long time for the voice to define itself. In my high school, my choirmaster made me sing solo and it was obvious that I have a voice. I began voice lessons at age 16.

My main interest, however, was to become a chef. But it occurred to me that if I pursued the preparations for a singing career and was unsuccessful, I still could always cook, but, if I didn’t pursue the vocal training, there would be little opportunity for a singing career.

I sought an opportunity for advanced studies abroad on the advice of my voice teacher. I applied for every collegiate vocal program in the United States. The school that accepted me was the San Francisco Conservatory of Music in 1998.

EvdH: From the Conservatory, I applied for San Francisco Opera’s Merola Opera program for young artists. Above all my expectations I was accepted. San Francisco Opera Center Director Sheri Greenawald recognized something in me.  I was in the Merola program in 2003 and 2004.

The San Francisco Opera Center experience was a gift that fell into my lap. For me, Sheri is the biggest miracle. In the Merola program, I studied with international opera starts Dolora Zajick and Jane Eaglen. The Merola faculty included Martin Katz, Steven Blier, Warren Jones and Mark Morash, each of whom helped make it such a nurturing environment.

Wm: From the Merola program, you were chosen as a San Francisco Opera Adler fellow.

EvdH: Yes, I became an Adler Fellow in 2005. For my first two years I didn’t do anything but study with Sheri. Originally, I thought I was a mezzo. But working with Greenawald, I transitioned to the soprano repertory.

[Below: Elza van den Heever’s portrait photograph for her Adler Fellowship; resized image, based on a photograph, courtesy of San Francisco Opera.] 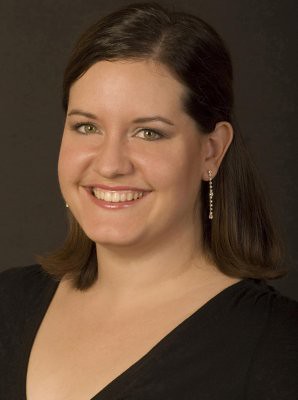 Finally, in 2006 I sang a role in the Napa Valley performances that are part of the Adler Fellow program. Meanwhile, I understudied Susan Graham for the title role of Iphigenie in Gluck’s “Iphigenie en Tauride”. I learned so much repertoire.

Wm: Virtually all sopranos have made their major opera house stage debuts in less chaotic circumstances than you did.  As outlined in my introduction to this interview, you replaced another artist as Donna Anna in Mozart’s “Don Giovanni” after Conductor Donald Runnicles’ final dress rehearsal.

EvdH: All of this came as a total surprise to me. I did not find out I would be singing Donna Anna until after that dress rehearsal. The circumstances were so strange, and I learned more during that time of great positives and great negatives then any time in my entire life. I am very grateful for the opportunity, although I am truly sorry that another artist was hurt. 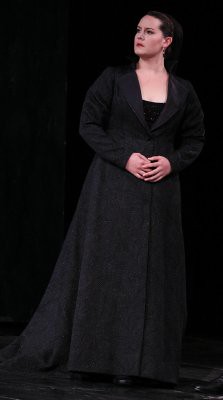 Wm: Now that you have signed with a prestigious manager, how has that affected your career?

EvdH: I do believe that Matthew Epstein is a great manager. We decided that I should establish a career in Europe, where I would be able to learn roles. We signed with the Frankfurt Opera, and that is now where I am based for the majority of my work.

Wm: Although Donna Anna seems currently to be your signature role, you also have sung or are scheduled soon to sing other demanding Mozart soprano roles.

EvdH: In Frankfurt, I continued my exploration of the role of Donna Anna, which requires a voice that can move, but is also dramatic.

Wm: Now that you have mastered Donna Anna, have you considered adding Elvira, “Don Giovanni’s” other “donna” role, to your repertory?

EvdH: Not at the present time.  Donna Elvira’s range does not set well with my voice It is a little low for me, especially her aria “Mi tradi”. It requires a very secure technique to sing either Anna or Elvira, but I don’t think I would touch Elvira now.

Wm: You entered the Second International Wagner Competition in Seattle and was a grand prize winner there. At that time you had not sung a Wagner role in a major house.

[Seattle Opera General Director Speight Jenkins (front, left) presents an emotional Liza van den Heever with a grand prize check of $15,000 for the Second International Wagner Competition, held in Seattle, as Susan Hutchinson of the sponsoring Simonyi Fund for Arts and Sciences and tenor Erin Caves look on; edited image, based on a Rozarii Lynch photograph, courtesy of the Seattle Opera.] 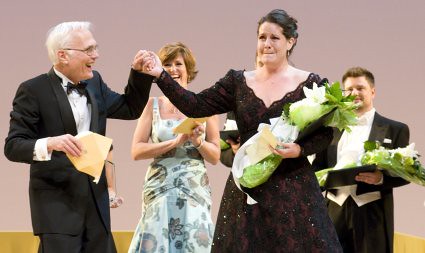 EvdH: Just before leaving for Santa Fe, I was singing Elsa in “Lohengrin” in Frankfurt.

[Below: Elza van den Heever as Elsa in Wagner’s “Lohengrin”; edited image, based on a Monika Rittershaus photograph for the Oper Frankfurt] 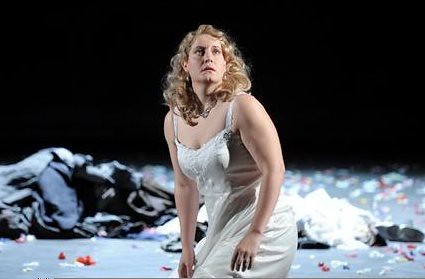 Wm: What is your favorite role at present?

EvdH: I don’t know. I am still early enough in my career that almost every single role I sing is a new role to me.

Wm: How would you describe the Santa Fe Opera experience?

EvdH: I had never taken part in an arts festival prior to this. My mentor, Sheri Greenwawald, would often say to me that the Santa Fe Summer Festival is one of an opera singer’s most beautiful experiences.

There is a wonderful collaboration of artists here, coming together in this special place. What we do in on the stage is of such a high level of artistry, it is incredibly fulfilling. And being in Santa Fe in one city in a house with a car for three months is unlike anything else I do.

Wm: You are scheduled to sing Fiordiligi in “Cosi fan Tutte” at Dallas Opera, this coming February, which I am scheduled to attend. I look forward to your further exploration of Mozart roles and the larger operatic repertoire.

[Below: Elza van den Heever, again in the role of Donna Anna, in the 2009 Santa Fe Opera Summer Festival; edited image, based on a Ken Howard photograph, courtesy of the Santa Fe Opera.] 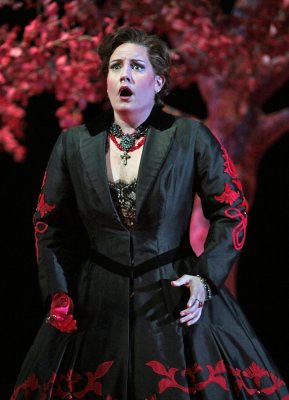 For the continuation of this interview, see: Rising Stars: an Interview with Elza van den Heever, Part II.