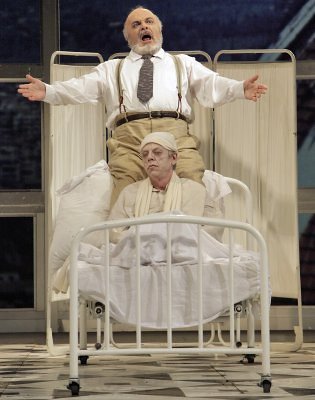 The opera, like “Tabarro”, is only 50 minutes long. (“Suor Angelica lasts an hour.) But unlike the sombre “Tabarro” and woeful “Angelica”, “Gianni Schicchi” is a merry caprice, genuinely funny, dominated by the personality and vocal and histrionic skills of Paolo Gavanelli in the title role. ‘Schicchi” continues the “deep casting” that San Francisco Opera has brought to this “Trittico”.

It has been suggested that the underlying theme of the “Trittico” is death. I would argue that it is even more specific than that – the unifying feature is the presence of a corpse in each opera. “Il Tabarro” ends with the curtain closing on the corpse of Luigi (to be followed after the curtain we imagine with the soon-to-be corpse of Giorgetta). The second of the operas, “Suor Angelica”, ends with Angelica’s lifeless body after her suicide. The third of the operas begins with Buoso Donati’s corpse – in James Robinson’s stage direction the murder victim of Zita, who uses a pillow to suffocate him before the audience’s eyes. (The very much alive actor Michael Harvey plays Buoso.)

Set designer Allen Moyer’s zany wall covering for the interior room in which Buoso’s death bed is located is perhaps the busiest set ever mounted on the San Francisco Opera stage.  Fortunately, it connects with its Florentine surrounding by opening at critical times to show a city view of Florence – such as when Rinuccio (David Lomeli) sings eloquently about beauties of the city or Lauretta (Patricia Racette) goes out on the balcony to feed the birds.

[Below: Allen Moyer’s basic set for “Gianni Schicchi”; edited image, based on a Cory Weaver photograph, courtesy of the San Francisco Opera.] 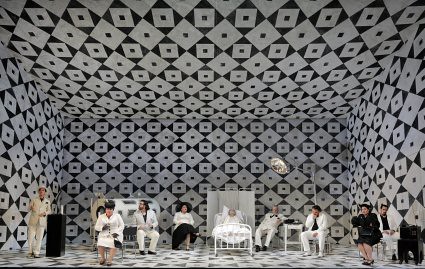 The wily Schicchi is unlikely ever to have done anything to advance the fortunes of the thoroughly dislikable relatives of Buoso Donati, except that young Rinuccio Donati (Adler fellow David Lomeli) has fallen in love with the apple of Gianni’s eye, his daughter Lauretta Schicchi (Patricia Racette).

Having spent her evening up until now in the territory of the dramatic spinto soprano, in the soaring vocal lines of “Tabarro’s” Giorgetta and Suor Angelica, Racette, with girlish charm, performs one of the most lyrical and famous arias that Puccini ever wrote, Lauretta’s O mio babbino caro. In the spirit of the broad comedy of her surroundings (and perhaps with a soprano’s swipe at some of the more indulgent tenors ending Canio’s aria Vesti la giubba in Leoncavallo’s “I Pagliacci”), Racette breaks out into sobbing at aria’s end. Her voice is nicely matched to that of Lomeli, whose voice has more weight than most Rinuccios and who, in fact, sang Alfredo in Verdi’s “La Traviata” in a San Francisco Opera performance  a couple of months earlier.

[Below: Rinuccio (David Lomeli) plans and  Lauretta (Patricia Racette) make plans to get married; edited image, based on a Cory Weaver photograph, courtesy of the San Francisco Opera.] 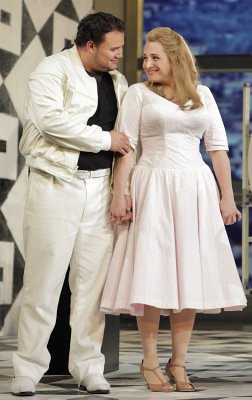 Gavanelli’s Schicchi deserves comparison with the three great Schicchis who appeared at San Francisco Opera between 1958 and 1979: Tito Gobbi (1964), Donald Gramm (1975) and Giuseppe Taddei (1958 and 1979). Gobbi, whenever onstage in any role was mesmerizing. Graham and Taddei, like Gobbi, were consummate actors (and both shone in the  scintillating 1975 production of the work by Jean-Pierre Ponnelle for San Francisco Opera, that now, I suspect, no longer exists). Gavanelli’s portrait of Schicchi, in the tradition of these great predecessors of the previous generation, was peerlessly sung.

My one regret, however, when comparing the great performances of “Schicchi” on San Francisco’s War Memorial Opera House, is the time-shift from the 13th century date specified by Puccini and his librettist to 1952, in the Moyer production. More will be said of the time-shifts below.

[Below: Gianni Schicchi (Paolo Gavanelli, top) jumps into the death bed of Buoso Donati (Michael Harvey); edited image, based on a Cory Weaver photograph, courtesy of the San Francisco Opera.] 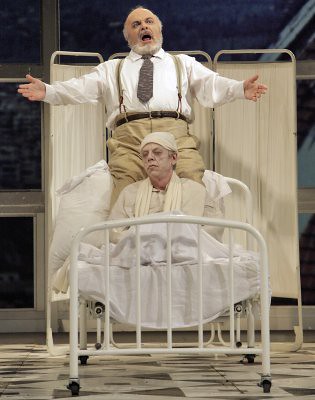 Even with the strong impressions left by Gavanelli, and the success of Racette and Lomeli in the roles of the lovers, one notes that  an extraordinary ensemble of actors was brought together to round out the large cast. Andrea Silvestrelli, whom I praised for his Talpa in “Tabarro” was equally enjoyable as the Donati family’s elder, Simone. The role of the domineering Zita was played by Meredith Arwady, with Catherine Cook (La Ciesca) and Rebekah Camm (Nella) rounding out the trio of comic women’s roles.

The adult male Donati also included Thomas Glenn (Gherardo), Jake Gardiner (Betto), and Austin Kness (Marco). Kyle Reidy, a member of the Boys Chorus, with impressive experience in the solo parts in opera for young kids, was the Gherardino – much of the time attracted to a television set which is playing a comedy that at one point distracts the attention of all the Donati from their job of mourning. The outsiders who are permitted briefly into Buoso’s bedchamber are Bojan Knezevic (Spinellocio), Levi Hernandez (Amantio di Nicolao), Kenneth Kellogg (Pinellino) and Valery Portnov (Guccio).

[Below: Gianni Schicchi (Paolo Gavanelli, center) meets the Donati; edited image, based on a Cory Weaver photograph, courtesy of the San Francisco Opera.]

The set designer, Allen Moyer, and stage director, James Robinson, apparently believed that their audiences would respond to the “Trittico” if each of the three operas were portrayed as taking place within the same year (apparently, 1952). Relatively little harm is done in shifting “Tabarro” and “Suor Angelica”, in that the dramatic situations on the bank of the Seine and in a nun’s cloister has little relationship to any specific time period. (Moving “Angelica” out of the cloister into a children’s hospital is quite a different matter, and the problems with that are discussed at length in my review of that opera’s performance.)

The production team took the most liberties of all through time-shifting a tale from the time of Dante’s Divine Comedy (specified as 1299) to Fellini’s Italy. Here the time machine arguably went a decade or so too far into the future, because only in Mussolini’s Italy could you imagine a situation where a group of people conspiring to break a civil law could be persuaded that if anyone spilled the beans on the conspiracy all of them would lose a hand and would be banished from Florence.

(Woody Allen in his production of “Gianni Schicchi” for Los Angeles Opera last Fall, also moved the action from Renaissance Italy to someplace much closer to our time. However, in Allen’s conception, both the Donatis and the Schicchis seemed to have mobster connections. For all we know, the gangland could have extended to the monastery that these two families conspire to defraud, and the threat of physical maiming of community members who cut a deal for themselves at the expense of a larger mob organization might be plausible.) For a review of Woody Allen’s production, see: Woody Allen’s L. A. “Gianni Schicchi”: Spoofing Italian Films – September 6, 2008.

But since we are watching a comic fantasy instead of a documentary on Italian customs, I can report that “Gianni Schicchi” is a pure delight. The three operas, conducted impressively by Patrick Summers, were populated by great casts that transcended any of the deficiencies of the production. Racette’s strong presence in all three operas shone through, even as she shared the stage with the formidable Gavanelli in the first and third operas and the estimable Podles in the second. In this “Trittico” the audiences unquestionably got their money’s worth.