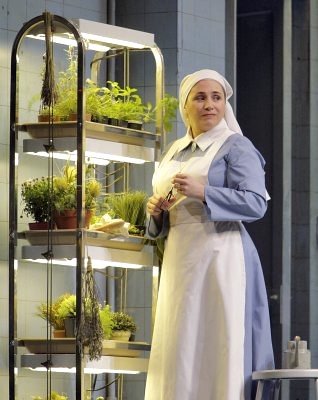 “Suor Angelica” is the least performed of the Puccini operas written since the Tuscan Maestro hit his stride with “Manon Lescaut” in 1893. Debuted around the period of the Great War, it presented a religious theme, even though Puccini himself was not regarded, as Charles Gounod was in the generation before him, as a deeply religious person.

For much of the 20th century, many critics dismissed Puccini as something of a lightweight (as some Europeans continue to do so) and “Suor Angelica” and “La Rondine” got tagged as old fashioned, and something that would join the lesser operas of say, Pietro Mascagni, in operatic oblivion.

We are now in a period of a major re-evaluation of Puccini’s works, and the less familiar operas are now being performed more often and are found to be both musical and dramatic treasures. (Even his early “Le Villi” is now being performed throughout the world.) The beginning stages of a re-evaluation probably will always include some attempts to smooth out the imagined imperfections in unfamiliar pieces. “Suor Angelica”, like his supposedly light-hearted “La Rondine”, are two operas which have their detractors, who find the endings immoral (“Rondine”) or uncomfortable for a sophisticated audience (“Suor Angelica”).

The alternate ending of “La Rondine”, more or less created by Marta Domingo for the production owned by the Los Angeles Opera, addresses a supposed deficiency in the standard version of the work that I just don’t believe exists. Although Senora Domingo’s desire to make a wonderful Puccini opera more popular, shows her heart is in the right place, those who have come to know it in the version that should be considered Puccini’s final word on the matter, are very impressed with it just as it is.

Several years ago, a team at the New York City Opera set out to present the “Trittico” intact. The team, led by Set Designer Allen Moyer and Stage Director James Robinson developed a general framework to tie the three operas together. Each was to be reset in the early 1950s, reflecting the fashions and customs of the period, even to the predominance (nuns apparently excepted) of cigarette smoking among adults. Perhaps having each opera grounded in what to the creative team  represented the 1950s gave the evening a much-desired unity. But staging  a Catholic “miracle” seemed out of character with the rest of the evening.

In order to stack the cards more in favor of the New York audiences accepting “Suor Angelica”, they followed a line of argument (that Conductor Patrick Summers in an article in the opera program appears to endorse) that Puccini intended the  supposed “miracle” at the end to be the manifestation of Angelica’s psychological state, rather than a literal miracle without quotation marks.

The miracle, for those unfamiliar with the story, is that an agitated Angelica, having deliberately poisoned herself after learning of her illegitmate son’s death, begs forgiveness of the Virgin Mary for her suicide, so that she can join her son in heaven. And the Virgin Mary does just that, and her son joins her. That’s how Puccini’s “Suor Angelica” ends.

Believe it or not, that ending over the years has made some stage directors nervous or even defiant of the composer’s intent. The theory arose that Puccini and his librettists wrote it one way but really intended something else. In more recent years, with the rise of concept directors, the importance of the composer’s intent receded, as the maxim was promoted, and strongly supported in some opera houses, that it is not what the composer intended that matters, it is how the stage director wants to deal with (“conceives”) the story.

One sometimes has to guess what the motivations of concept directors are. Sometimes you can figure it out fairly readily. Sometimes what the stage director is trying to say is much more obscure.  (When I try to discern the meaning of some of Hans Neuenfels’ work in Germany I find myself without a single clue.)

But I suspect that the team intended to produce a young boy at exactly the pyschological moment that Angelica sees her dead child appear. The appearance of a little boy within a group of cloistered nuns, whether it was 1952 or any other date one could imagine, would seem even more improbable than a mere miracle. Thus, an elaborate shift of the story’s place from a cloister to a busy Catholic children’s hospital permitted the coup de theatre at opera’s end, where  one of the hospital’s boy patients peeks his head through a door window just as the dying Angelica imagines that she is reconnecting with her dead son in heaven.

[Below: the nuns have moved their cloister to a Catholic children’s hospital; edited image, based on a Cory Weaver photograph, courtesy of the San Francisco Opera.] 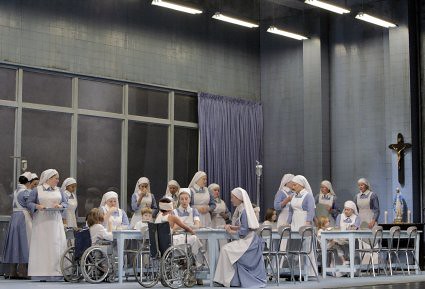 Of course, if you change the premise of the setting of the story, other pieces of the story unravel. If you do away with the stifling oppression of a cloistered life of obedience and turn the nuns into the hospital social workers and health care providers, the dynamics of the cloistered life disappear. We have things going on onstage that accompany the music that Puccini wrote, but it doesn’t stand up to analysis.

Here, the Los Angeles Opera, so wrong on”Rondine”, has “Suor Angelica” right. In its production the non-Catholic William Friedkin, who embraced Catholic mysticism in his film “The Exorcist”, presents the opera literally, with the Virgin Mary descending from the sky, forgiving Angelica’s suicide, and bringing her dead son to her so that they can be reunited in heaven. Lest the audience be confused as to whether this is a literal miracle or something in Angelica’s head, members of the Convent are onstage to witness the Virgin’s intercession. The result is spectacular, and shows the theatrical power of playing this opera straight. For my review of the Los Angeles Opera “Suor Angelica”, see: Friedkin’s Miraculous, Radvanovsky’s Revelatory L.A. “Suor Angelica” – September 6, 2008.

I alluded in my review of “Il Tabarro”, the first opera of the “Trittico”, that the choice of the New York City Opera production was the consequence of budget cutbacks. If one is seeing the opera for the first time, or even if one is a Puccini aficionado curious about the wrong-headed approaches to the opera that abounded in the 20th century, the children’s hospital set is pleasant enough, and actually more interesting than the “Tabarro” barge deck.

What can be said in its favor is that it provides an opportunity to hear the music performed with stage action that follows the story. Even the presentation of Angelica’s mental agony, suicide and recanting of her suicide at the end, even if this reviewer regards it as sub-optimal, many audience members will find inoffensive.

[Below: Sister Angelica (Patricia Racette) grows herbs in terrariums that she tends in the children’s hospital; edited image, based on a Cory Weaver photograph, courtesy of the San Francisco Opera.] 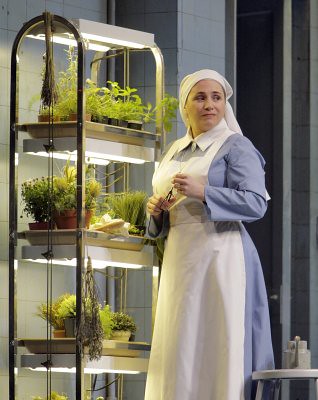 There is one scene that virtually always works in “Suor Angelica” and which some opera managements regard as  the raison d’etre for mounting the opera. This is the appearance of the Principessa, Angelica’s austere aunt, who forced her into the convent as atonement for disgracing the family with an illegitimate child. For this production, Ewa Podles, the eminent Polish contralto, makes her San Francisco Opera debut.

[Below: the Principessa (Ewa Podles) seeks out Sister Angelica in the cafeteria of the children’s hospital; edited image, based on a Cory Weaver photograph, courtesy of the San Francisco Opera.] 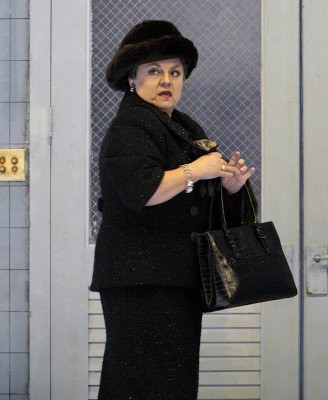 Director Robinson, unlike most directors I have seen, allows the hint of a compassionate embrace between Angelica and the Principessa before the latter leaves. The denouement unleashes Racette’s vocal prowess and skills at melodrama. She covers up the head of a statue of the Virgin, smashes a medicine cabinet to get the base for a poisonous poultice, then mixes in herbs from her terrarium to be sure of its success.

Once she drinks the poultice, she recalls that suicide is a mortal sin that would separate her from her son in heaven so she recants and appeals to the virgin for aide. (A person knowledgeable in the intricacies of Catholic theology pointed out another point in favor of Friedkin’s ending with its witnessed intercession by the Virgin. Since Robinson’s Angelica has committed suicide, she cannot be buried in hallowed ground – assuring eternal separation from her innocent child – since there was no one present to witness her recantation.)

[Below: the dying Sister Angelica (Patricia Racette) sees the head of a boy through the glass window in a hospital door, whom she knows is her dead son; edited image, based on a Cory Weaver photograph, courtesy of the San Francisco Opera.] 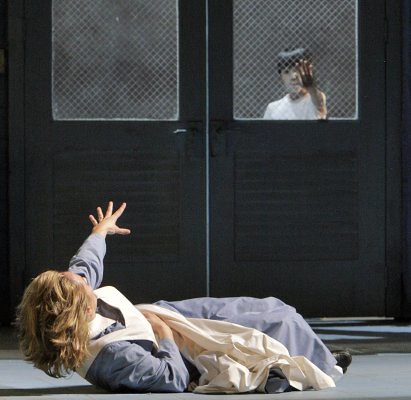 Is my critique of the production sufficient for a person on the fence about buying a ticket to stay at home? No, I think of them as arguments for choosing a different production of “Suor Angelica” in any future showing of the piece in San Francisco. Racette in her great final scene, as well as her interchange with Podles in the confrontation with the Principessa, is sufficient reason to invest in an evening of “Trittico”, and that is even without the formidable attraction of Gavanelli in “Tabarro” and “Gianni Schicchi” and Jovanovich in the former opera.

For reviews of other recent Patricia Racette performances, including one with Conductor Patrick Summers, see: Racette, Ventre Impress in Zambello-Inspired “Butterfly” at San Diego Opera- May 20, 2009, and