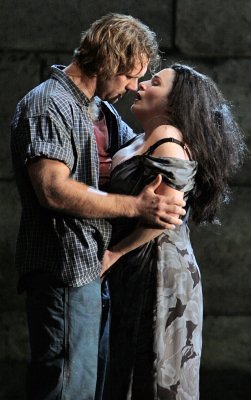 San Francisco Opera General Director David Gockley, on assuming his position at the beginning of 2006 stated that all of the operas of Puccini’s maturity would be seen at the San Francisco Opera in the next few seasons. Thus began a series of great Puccini performances, including Karita Mattila and Mischa Didyk in “Manon Lescaut” (2006), Angela Gheorghiu and Piotr Beczala in “La Boheme” (2008), Adrienne Pieczonka, Carlo Ventre and Lado Ataneli in “Tosca” (2009),  Patricia Racette and Brandon Jovanovich in “Madama Butterfly” (2007) and Gheorghiu and Didyk in “La Rondine” (2007).

This season four more operas in the Puccini canon were scheduled. The three of the “Trittico” already having debuted . The centenary of “Fanciulla del West” will be celebrated with June 2010 performances. This leaves only “Turandot” of the operas written after “Manon Lescaut” to be mounted on Gockley’s watch.

For decades opera houses (including San Francisco’s) ignored Puccini’s intent that his three one-act operas (“Il Trittico”) be performed together in a single evening.  San Francisco Opera in its previous 86 seasons, performed the “Trittico” together for only three performances in San Francisco (once in 1923, twice in 1952) and one time when on tour in Los Angeles. This year, San Francisco Opera is observing what appears to be an emerging and welcome 21st century convention to perform all three operas together on the same evening.

“Trittico” performed as intended is a rewarding experience, but it does create great difficulties for an operatic management. For one thing, “Tabarro” has three star roles and three singing roles requiring accomplished character actors; “Suor Angelica” has two star roles and a dozen other named roles (with women singing every part in the opera) and “Gianni Schicchi” has one star role, two co-starring roles, and another dozen singing character actor assignments. With so many roles, managements presumably would like to double (or triple) as many as possible, but Puccini has not made it easy on them. Luigi in “Tabarro” is a spinto tenor part  with no equivalent role in another “Trittico” opera, and the Principessa in “Suor Angelica” is a dramatic mezzo/contralto role, which commands the presence of one of the few international singers in this category, and who then sings only a few minutes.

At Gockley’s investiture as General Manager, he pledged to secure the leading artists of our day to perform at the San Francisco Opera. To this end, he was able to persuade dramatic baritone Paolo Gavanelli, who has performed many of the major Verdi baritone roles for the company, to sing Puccini roles for the first time in San Francisco – Michele in “Il Tabarro” and later in the evening, the title role of “Gianni Schicchi”. There is no precedence at San Francisco Opera for a baritone singing both of these roles, much less in the same evening..

Gavanelli, except for his San Francisco Opera debut role of Germont in Giordano’s “Andrea Chenier” in 1992,  until this season has been exclusively a Verdi baritone at this house. Michele is an intense role, much of it sung with the treacherous high tessitura associated with Verdi baritones, often also requiring the singer to balance his voice to the abundance of orchestral sound that Puccini uses to underscore dramatic points. The artistry of other great baritones is noted in these reviews, but no baritone exceeds Gavanelli in power and expressiveness and in sheer vocal beauty. Any aficionado of great opera singing should have a ticket (or should have already been) to see his Michele and Schicchi.

[Below: Paolo Gavanelli is Michele; edited image, based on a Cory Weaver photograph, courtesy of the San Francisco Opera.] 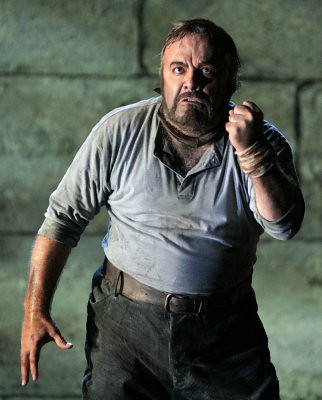 Although a few sopranos have sung all three of the soprano roles in the “Trittico” (Giorgetta in “Tabarro”, the title role of “Suor Angelica” and Lauretta in “Gianni Schicchi”) that is an even much rarer event than the rarity of seeing the three “Trittico” operas performed together. Patricia Racette has chosen to add the three roles to her impressive repertoire, and agreed to sing all three for San Francisco Opera audiences.

Racette is in the first rank of singers of the operas of Puccini and his verismo compatriots. She should be regarded as the guardian of the heritage of the verismo operas and the roles that great singing actresses as Dorothy Kirsten and Magda Olivero sang at the San Francisco Opera as late as the 1970s.

[Below: Patricia Racette is Giorgetta; edited image, based on a Cory Weaver photograph, courtesy of the San Francisco Opera.] 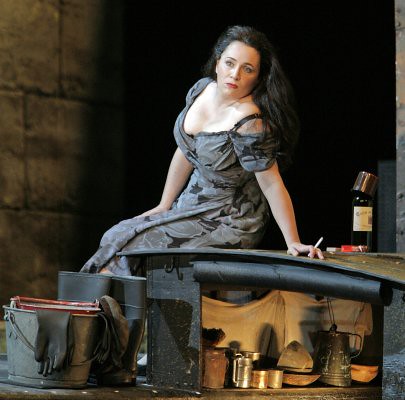 In her first role of the evening, Racette is paired with Brandon Jovanovich, reuniting the pair that performed  Cio Cio San and Pinkerton in one of the most memorable performances of “Madama Butterfly” at San Francisco Opera in recent memory. Jovanovich’s ringing tenor voice and rugged good looks makes him as an appealing a Luigi as one could imagine.

[Below: Brandon Jovanovich is Luigi; edited image, based on a Cory Weaver photograph, courtesy of the San Francisco Opera] 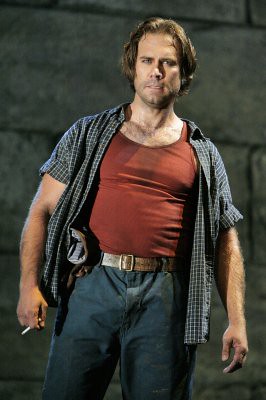 These two spinto artists, when together exude passion and sexuality, but in “Tabarro” unlike “Butterfly”, neither of their characters is under any illusions about their love affair. In James Robinson’s stage directions, it is so openly sexual, that it is clear that Luigi and Giorgetta, like Silvio and Nedda in Leoncavallo’s “I Pagliacci” grossly underestimate just how dangerous the man is to whom each woman is married. 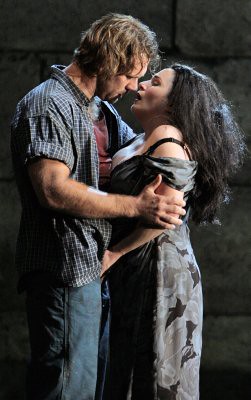 Michele’s barge employs two other men, Il Talpa (Andrea Silvestrelli) and Il Tinca (Matthew O’Neill), who along with Talpa’s wife La Frugola (Catherine Cook), form the more or less comic trio (or perhaps more precisely a threesome of vivid eccentricities). I have cited O’Neill’s mastery of Tinca’s high tessitura when he performed this role last September at Los Angeles Opera. Clearly, O’Neill and Cook are pursuing careers in opera’s major character roles. Silvestrelli’s luxurious basso profondo (heard also as Simone in “Gianni Schicchi”) will be in demand for a much wider range of basso roles, so it has to be regarded as a special treat for us to hear and see him in the interesting role of Il Talpa. Past and present Adler Fellows sang the three small parts that evoke the “local color” of Paris – David Lomeli and Tamara Wapinsky were the two lovers and Thomas Glenn was the Song Vendor.

Patrick Summers had just completed a series of performances with Racette at Santa Fe Opera, conducting Morevac’s “The Letter” (my review is at 21st Century Maugham: Morevac, Racette Reopen “The Letter” in Santa Fe – July 29, 2009.) Having reviewed performances of him conducting Verdi and Britten in Houston and Gluck, Handel and Saint-Saens at the San Francisco Opera, the eclecticism of his interests deserves special comment. He does everything well. If Wagner seems to be missing from the list, he is preparing “Lohengrin” for Houston Grand Opera, whose rehearsals he will be conducting as soon as the “Trittico” performances are over. (I am scheduled to be in Houston to report on his “Lohengrin”.)

A Critique of the Moyer Production

The physical production was by Allen Moyer, whose work I have found of variable interest. It ranges from pleasantly adequate (the shift of Donizetti’s “L’Elisir d’Amore” to California’s Napa Valley just before the outbreak of World War I, reviewed at San Francisco Opera in 2008) to awful (my review of the lumber scrapyard production of Bellini’s “Norma” that was the least defended production at San Francisco Opera I have ever come across, is at Norma November 21, 2005 San Francisco). James Robinson has been stage director for most of the Moyer productions I have seen.

I liked immensely the new production of “Tabarro” by Hollywood superstar director William Friedkin, that opened the Los Angeles Opera 2008-09 season. Thus, Moyer’s minimalist set that represented the deck of a barge that was tied next to a walkway along the bank of the Seine, failed to impress me. 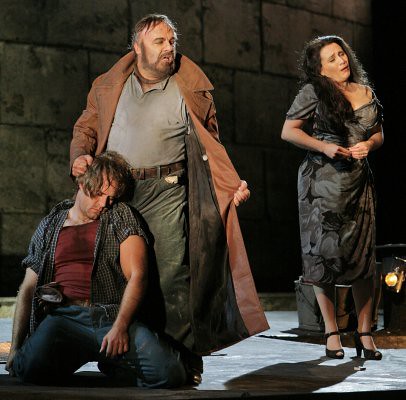 The sets date from 2002, when Puccini’s “Trittico” was presented at the New York City Opera in a new Moyer “concept” production. As conceived, all three of the “Trittico” operas would be time-shifted to a half-century before that date (1952). But an imaginative concept does not necessarily mean a successful production. In this “Trittico” the “Tabarro” set was not as good as the sets for “Gianni Schicchi”, but neither was it as bad as the set for “Suor Angelica”, whose reviews will be posted on subsequent days. Unlike the latter, the “Tabarro” at least was consistent with Puccini’s storyline.

I suspect that the people most pained with the necessity of presenting “Tabarro” with the New York City Opera sets was the San Francisco Opera administration itself. The economic recession resulted in a multi-million dollar budget shortfall, which required substantive cuts. There were technical reasons, including what fits on the San Francisco Opera stage, why better productions could not be rented.

The bottom line is, if the San Francisco Opera can afford to assemble the “Tabarro” cast that performed in San Francisco with Summers conducting, but to offset the budget shortfall they had to skimp on the production budget, the assembling of this cast and conductor was the correct priority.

San Francisco Opera has not done “Tabarro” for 34 years. Although I treasure my memories of Leontyne Price’s Giorgetta and Gabriel Bacquier’s Michele, when mounted 38 years ago, the current cast has greater depth, with Jovanovich’s Luigi and the strong representation in the character roles making this a world class “Tabarro” cast.

For a review of another operatic performance by Patricia Racette and Brandon Jovanovich, see:   The Remaking of San Francisco Opera Part III “Madama Butterfly” – December 8, 2007.