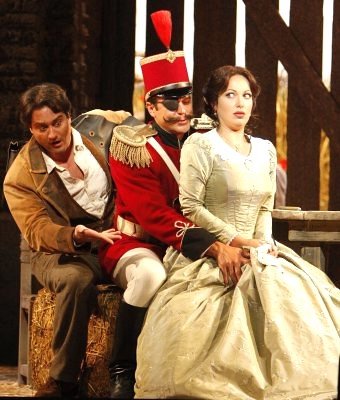 An opera company often builds its “opening nights” of a season around the presence of major opera stars.  An opera is selected for them that will appeal to opening night audiences, which include a considerable representation of those patrons on whose support the company depends.  It is important that everything go well.

Los Angeles Opera devised a sure-fire plan for a successful opening night. Super-star tenor Rolando Villazon would open the season in one of his most successful roles, Nemorino in Donizetti’s superb comedy, “L’Elisir d’Amore”. Veteran basso Ruggero Raimondi, who has established himself as an expert in the “buffo” roles of Italian comic opera, would make his Los Angeles Opera debut as Doctor Dulcamara. The cast would be filled out with the irresistible Nathan Gunn as the  vain Sergeamt Belcore. James Conlon, Los Angeles Opera’s music director would conduct the opera personally.

The Adina was to be a newcomer,  soprano Nino Machaidze. Those who follow European reports of artists who have achieved success in bel canto and French roles will likely have heard of the Georgian coloratura.  Now an established favorite of European audiences, until this night she had not performed in North America.

[Below: a studio portrait of Nino Machaidze; edited image of a publicity photograph, courtesy of the Los Angeles Opera.] 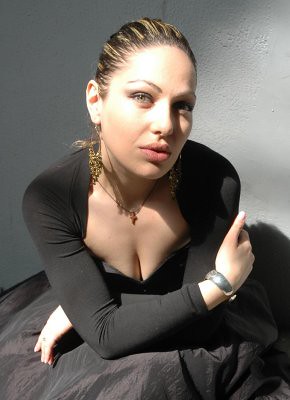 Thus, the Los Angeles Opera drew the distinction of being the company that secured her first performances in the United States. Unfortunately, surgeries required the withdrawal of Villazon, the originally announced Nemorino (an operation on his vocal cords) and Raimondi the announced Dulcamara (an operation on an injured Achilles’ tendon). Nathan Gunn, the Belcore, remained healthy for the opening night performance.

Two artists with established reputations replaced Villazon and Raimondi, respectively Donizetti specialist Giuseppe Filianoti and the talented young baritone Giorgio Caoduro. Although these were Los Angeles Opera debuts for Filianoti and Caoduro, both had successes in Donizetti roles the previous year at the San Francisco Opera.

[Below: Nino Machaidze as Adina; edited image, based on a Robert Millard photograph, courtesy of the Los Angeles Opera.] 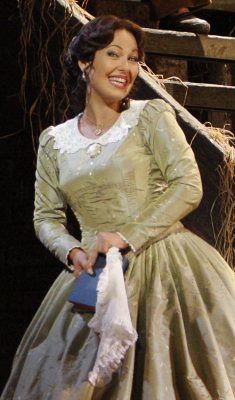 The sets and costumes were by Johan Engels, reviving a co-production originally developed with Grand Theatre de Geneve. Most of the stage action takes place in the forestage which is set as a barn, with stairs leading to hay bins. Slatted wooden doors open to a path to the farmland. The area just outside of the barn is filled with farm implements and associated paraphernalia.

The stage director was Stephen Lawless, a favorite of this reviewer, who has praised his stage direction of Verdi’s “Il Trovatore” at the San Diego Opera (2007), of Donizetti’s “Roberto Devereux” at the Dallas Opera (2008), and of the new (and totally different) production of Donizetti’s “L’Elisir d’Amore” at the Santa Fe Opera (2009). A feature of his work is its total commitment to the story that the composer and librettist intended  the audience to see. Lawless’ imagination seems limitless. Those who saw his hilarious “L’Elisir” in Santa Fe this summer will be surprised at his ability to come up with wholly different routines for the comic situations that Donizetti and his librettist, Felice Romani, devised.

[Below: when Sergeant Belcore (Nathan Gunn, center) attempts to get fresh with Adina (Nino Machaidze, right), Nemorino (Giuseppe Filianoti) jumps behind him; edited image, based on a Robert Millard photograph, courtesy of the Los Angeles Opera.] 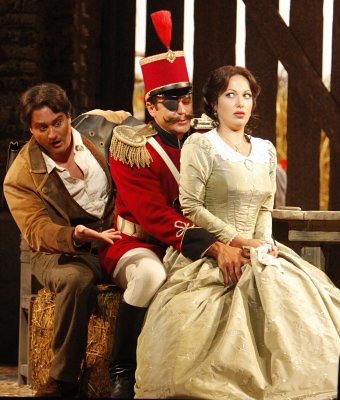 Lawless was helped immeasurably by having singing actors skilled in comic timing. Especially notable was Filianoti as Nemorino, who managed always to hold our sympathies even when goofy events overwhelmed. His first act singing was at a high level of artistry, but by the second act it seemed obvious he was experiencing vocal discomfort. (My colleague reviewer Tom attended the second performance on September 15th and reported that Filianoti sang fabulously throughout that evening.)

[Below: Nemorino (Giuseppe Filianoti) is impressed at how good the love elixir tastes, not realizing that it is only two-buck Bordeaux; edited image, based on a Robert Millard photograph, courtesy of the Los Angeles Opera.] 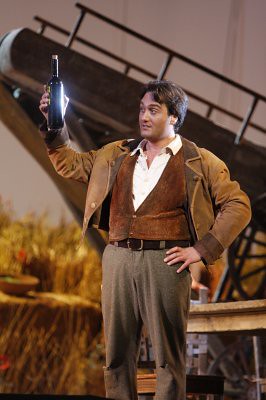 Caoduro proved in San Francisco that he makes a thoroughly enjoyable Belcore. But he is not yet out of his 20s, and the role of Dulcamara proves that even this charlatan requires a greater degree of gravitas than the boyish looking Caoduro seems to be able to muster. It was an emergency situation, there is not a long list of first rank Dulcamaras in the world, and Caoduro does have the ability to perform his famous patter song with aplomb. But, except in emergencies such as this one, Dulcamara is a role that he should consider setting aside for a couple of decades.

[Below: Doctor Dulcamara (Giorgio Caoduro, left) prices a bottle of the love elixir so as to equal the bonus Nemorino (Giuseppe Filianoti, right) received for enlisting in the army; edited image, based on a Robert Millard photograph, courtesy of the Los Angeles Opera.] 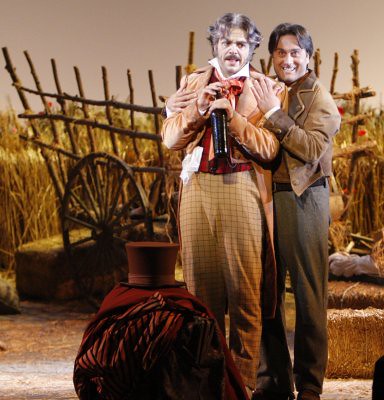 The final scenes of “L’Elisir d’Amore” contains some of Donizetti’s greatest music. Of course, Nemorino’s Una furtiva lagrima is in the “top ten” of favorite Italian tenor arias, but Adina’s music is such that many of the world’s greatest coloratura and leggiero sopranos are attracted to the role. Machaidze demonstrated beyond all doubt that this is not just a tenor’s opera.

In the Lawless-Engels production, the final scene is especially poignant, when Adina confesses that she has always loved Nemorino and they stroll in the hayfield under the moonlight.

[Below: Adina (Nino Machaidze) explains why she bought back the contract that Nemorino (Giuseppe Filianoti) signed to join the army; edited image, based on a Robert Millard photograph, courtesy of the Los Angeles Opera.] 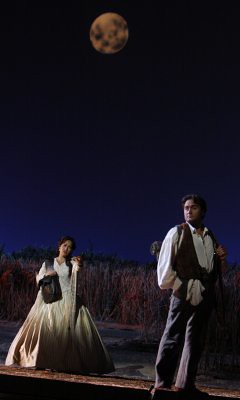 Those with an opportunity to hear Machaidze should do so, in a nicely staged performance, superbly conducted, surrounded by a cast that can hold its own in any part of the world.