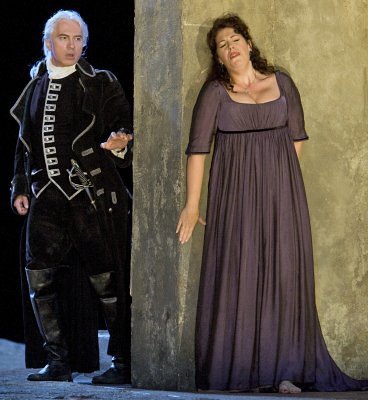 Nicola Luisotti, the San Francisco Opera’s newly installed Music Director opened the company’s 87th season, conducting Verdi’s “Il Trovatore”.  By tradition in American opera houses, the season opener is preceded by the orchestra accompanying the audience in singing the Star-Spangled Banner. All were aware that this first official act of the new Music Director was this observation on the eighth anniversary of the catastrophic events in New York, Pennsylvania, and Washington, D. C.

The choice of “Trovatore” seemed especially symbolic. The operas of Verdi are methodically being restored to their former prominence in a company founded by Italian-born Gaetano Merola, who served as San Francisco Opera’s general director for its first three decades. Significantly, San Francisco Opera provided Luisotti with a throughly stellar cast.

The production, originally conceived and directed by Scottish Director David McVicar, was revived for San Francisco by McVicar’s colleague,  Walter Sutcliffe.  In Verdi’s opera, and the Gutierrez play on which it was based, Manrico is in the service of the Basque rebels of Vizcaya and his brother serves the Spanish King and Queen. Shifting the action to the Vizcaya of Napoleonic Spain was, of course, anachronistic as far as the medieval troubador traditions are concerned, although less anachronistic in representing the millenium-old battles between the Basques and Spanish central goverment authority.

However, the production was not only impressive in itself, but quite eloquently made the point that it was NOT the loudly booed “Trovatore” production that Gockley’s predecessor, Pamela Rosenberg, had imported from the Seattle Opera in 2002, then complained about to the San Francisco press. (Seattle Opera is also presenting “Trovatore” this year, but has borrowed a production from the Minnesota Opera, instead of reviving their production seen in San Francisco.)

Nor was the production in the spirit of the Rosenberg era’s own new production of a Verdi opera, a widely ridiculed mounting of “Forza del Destino”. Fortunately, its conductor (Luisotti in his San Francisco Opera debut) was one of the artists associated with the production who came through with his reputation unscathed.

The physical McVicar production symbolically suggested that in the Gockley-Luisotti era, that Verdi’s operas will be taken seriously and presented respectfully, and that such time-shifts and departures from Verdian intent will make sense in context. The stellar cast, beyond the festival honors afforded the new music director at his official debut in the role, represents the San Francisco Opera’s commitment to excellence in mounting Verdi’s operas with casts with the ability to meet (and on this night exceed) the standard of world class Verdi singing.

Even so, there is a significance even beyond the presentation of an important production, not seen before in San Francisco, with a prominent cast. Luisotti and the four major artists – Marco Berti (Manrico), Sondra Radvanovsky (Leonora), Stephanie Blythe (Azucena) and Dmitri Hvorostovsky (Conte di Luna) – achieved an extraordinary level of an infinitely expressively, superbly controlled style of singing.

McVicar’s production, whose sets are by Britain’s Charles Edwards, is on a large turntable and utilizes the vast vertical spaces of the San Francisco Opera stage. The massive staircase that dominates the opening scenes of the first and third acts represents the grounds of the Count di Luna’s castle. (A photograph of the third act set appears  later in this review.)

The lead comprimario in “Trovatore”, almost significant enough to be considered a starring role in itself, is that of the retainer Ferrando. He narrates the backstory of horrific events two decades before. Those events cast long shadows on each of the four principal characters. Ferrando later sets into motion the opera’s chilling conclusion by capturing and identifying a central figure of that backstory.

Bilgili, a basso cantante with power in the baritonal range, is unquestionably a vivid and interesting artist, whom one hopes will become a familiar figure in San Francisco. (Of course, since I am a strong advocate for the San Francisco Opera restoring “Lakme” to its active repertory, I would be especially pleased to hear his Nilakantha at the War Memorial Opera House.)

[Below: Ferrando (Burak Bilgili, center) tells the story of the gypsy woman burned at the stake to the Count di Luna’s retainers; edited image, based on a Cory Weaver photograph, courtesy of the San Francisco Opera.] 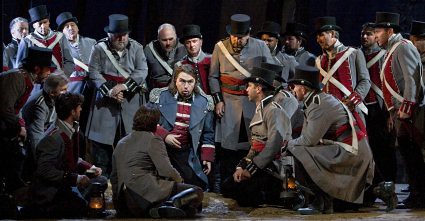 After Ferrando explains what has happened up to the time that the curtains first opened, we meet Leonora (Sondra Radvanovsky) in a momentary reverie of happiness, an emotion rarely shared in this opera in which misfortune is always but a step away. Radvanovsky is now without question one of the most gifted of contemporary dramatic sopranos. Those of us who are seeing her at this stage of her career are experiencing a voice of incredible range and flexibility. She is also a consummate actress with an arresting stage presence. Leonora, a role requiring techniques expected of both coloratura and dramatic sopranos, provides abundant opportunities for Radvanovsky to display her vocal skills and acting ability.

[Below: Leonora (Sondra Radvanovsky), in the darkness, mistakenly believes that the Count di Luna (Dmitri Hvorostovsky) is the troubador; edited image, based on a Cory Weaver photograph, courtesy of the San Francisco Opera.] 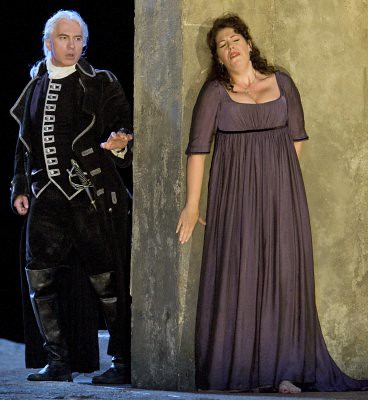 Soon Radvanovsky’s Leonora is intertwined in the affairs (and vocal lines) of two men, Hvorostovsky’s Count di Luna and Berti’s Manrico, sworn enemies as leaders of forces at war with one another, and on a personal level, rivals for Leonora’s affections, but who do not know they happen to be brothers. Verdi provides us with strong, overpowering music to accompany the passions that such extraordinary dramatic situations elicit. Soon we are at the divide by which we either surrender to the power of this opera, or stay with detractors and parodists who scoff at its supposed improbabilities.

Conductor Luisotti, by the end of the first act, has made it clear what he expects us to hear and to believe. Instead of the briskly paced, almost mechanical “Trovatores” one expects from some conductors both Italian and non-Italian of the immediately preceding generation, his “Trovatore” savors each dramatic moment, slowing, sometimes even stopping for a particular phrase to be uttered to its maximum effect. The audience is being told a story, and Luisotti and his orchestra are among the story’s most important narrators.

For Act II, we meet the final principal, Azucena, and the Vizcayan gypsies whose mysterious lifestyle provided the crucible in which Manrico’s passionate behavior was formed. The anvil chorus, McVicar style, employs well-trained percussionists who hammer out the rhythms of this most famous part of the opera.

[Below: the men of the encampment in which Azucena and Manrico live hammer on their anvils; edited image, based on a Cory Weaver photograph, courtesy of the San Francisco Opera.] 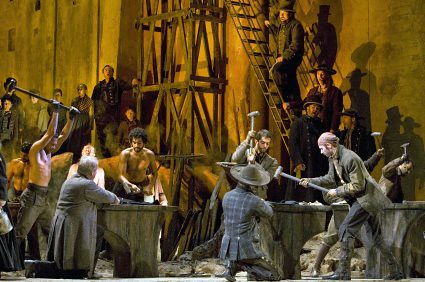 Stephanie Blythe’s Azucena was revelatory, displaying the tremendous effect that  a powerful and expressive mezzo voice with secure lower register can have with Azucena’s part.

[Below: Stephanie Blythe as Azucena; edited image, based on a Cory Weaver photograph, courtesy of the San Francisco Opera.] 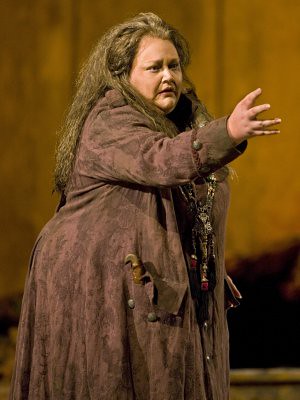 Marco Berti is perhaps slightly lesser known in the United States than the other three principals, although this website found his 2006 Gabriele Adorno (to Hvorostovsky’s title role of Verdi’s “Simon Boccanegra”) at Houston Grand Opera to be most impressive, as was his 2006 Don Jose in Bizet’s “Carmen” at San Francisco Opera. Berti is the example of the spinto tenor voice that is expected of an artist who assays to portray the great Verdian heroic tenor roles, such as Manrico, effectively.

[Below: Marco Berti as Manrico; edited image, based on a Cory Weaver photograph, courtesy of the San Francisco Opera.] 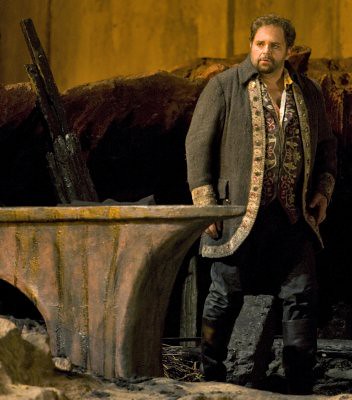 His character’s nemesis, the Count, was played by Dmitri Hvorostovsky, who is now one of the small number of baritones who can claim super-star status on the world scene. One has only to see and hear this great artist to understand that his reputation is fully deserved.

[Below: Dmitri Hvorostovsky as the Count di Luna; edited image, based on a Cory Weaver photograph, courtesy of the San Francisco Opera.] 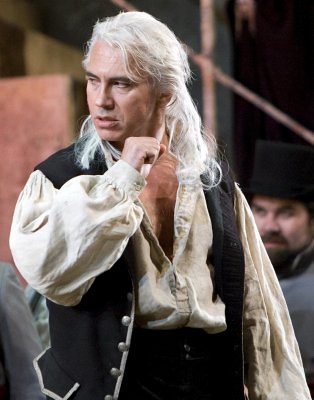 In the opera, of course, Manrico gets the better of the Count at every point – with even Manrico’s death at his hands assuring the Count a lifetime of grief and regret. After capturing Leonora from the Count, and taking her to his hideaway at Castellor, Berti’s Manrico sings the most celebrated tenor double aria in all of opera. In Ah si, ben mio the tenor must display peerless legato beautifully sung as he sings to Leonora of the real possibility that he will soon die, and in the rousing Di quella pira he must show both power and flexibility, ending with one of the great tenor high “C”s. Berti easily passed both tests.

Luisotti signalled with Di quella pira that he will follow the late 20th century convention of restoring most of the traditional cuts that existed for nearly a century, except for the strettas and second verses of cabalettas. (One of the few positive things about the infamous “Trovatore” production of 2002 is that Richard Margison sang both verses and San Francisco Opera audiences heard Leonora’s sentiments in the intervening stretta.) 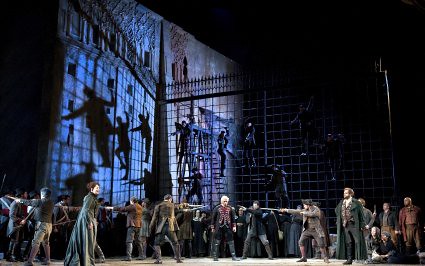 Some stage directors have often jumped to the surreal (an affectation perhaps derived from their feeling that every part of “Trovatore” has a surreal feeling anyway) when such popular “numbers” as the anvil chorus or the Act III soldier’s chorus need to be staged. McVicar, however, rarely forgets that operatic characters are sexual beings, and thus uses the opportunity of the latter music for the women camp followers to distract the soldiers from their military drudgeries.

[Below: the basic set for the grounds outside the Count di Luna’s castle, here the scene of the Soldiers’ Chorus in Act III; edited image, based on a Cory Weaver photograph, courtesy of the San Francisco Opera.] 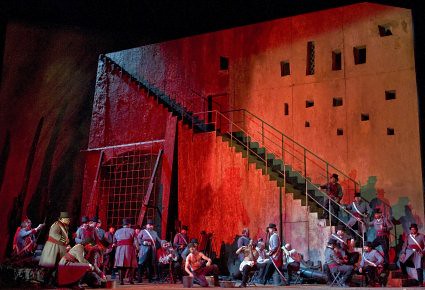 McVicar’s production was effective and filled with interesting details. The turntable allows the main set, with its long staircase up to the upper floors final scene, to turn to create the spaces in which the other scenes take place. The backside will at one point be Leonora’s apartments, at another the gypsy encampment with its anvils, in a third the convent in which Leonora is to be cloistered (with its ornate grillwork onto which Manrico’s troops climb). The last scene becomes the enclosure in which Manrico and Azucena are imprisoned around the very stake on which we assume Azucena is to be  immolated.

[Below: Ferrando (Burak Bilgili, left front) informs the Count di Luna (Dmitri Hvorostovsky, right front) that he recognizes that the captive is Azucena (Stephanie Blythe); edited image, based on a Cory Weaver photograph, courtesy of the San Francisco Opera.] 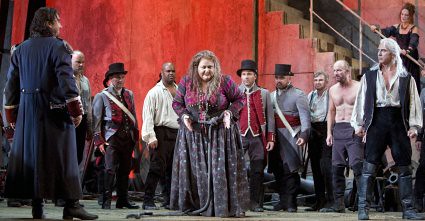 As noted above, Luisotti emphasizes the bel canto features of “Trovatore” by deliberately slowing the pace, permitting a profusion of bel canto singing from Radvanovsky, Blythe, Berti and Hvorostovsky.

It is a different “Trovatore” than has been heard recently in San Francisco, but it is a better “Trovatore”.   One realizes what a masterpiece this popular opera is when performed with the artistry and lyricism that Luisotti, the San Francisco Opera Orchestra and Chorus, and the principals achieved. It is the opening night of a new season and, for the operas of Verdi, a new era.

For a review of Verdi performance in which both Marco Berti and Dmitri Hvorostovsky sang, see: Hvorostovsky, Guryakova, Berti Excel in Houston “Simon Boccanegra” – November 4, 2006.