[Below: the Dorothy Chandler Pavilion at night, with Los Angeles Music Center fountains in the foreground; photograph by Tom. ] 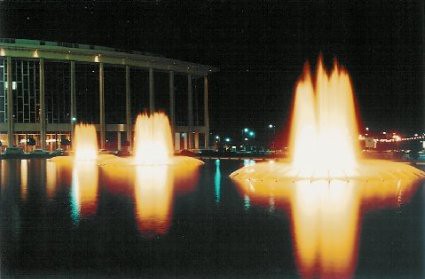 If you were to review the statistics on who holds either full or partial season tickets to the Los Angeles Opera, you would see that relatively few live in Downtown Los Angeles or nearby neighborhoods. Many opera patrons never come downtown for any other purpose than to see opera and know little about the area surrounding the opera house.

From the Hollywood Freeway Traveling East: When coming downtown on the Hollywood Freeway (101) from the Westside suburbs, get off at Hope Street (just past the famed “stack” of freeways) and turn left immediately on Temple Street, then turn right on Grand.  The parking lot underneath the Music Center is on your right.

From the Hollywood Freeway Traveling West: When traveling from cities in Eastern Los Angeles County, the Inland Empire Counties or Central Orange County (such as from Covina, Riverside and Santa Ana), use the Grand Avenue exit, turning right on Grand and traveling directly to the Music Center. You are deep below the tall buildings of the Downtown “slot”.

From either direction get off at the 4th St Downtown exit, which is one-way eastbound, and turn left on Olive Street, which dead-ends at the courthouse.  Turn left at that point (on 1st Street), and travel to Grand Ave, where you turn right to the Music Center.

Your best and most reliable bet is parking under the Music Center itself.  The entrance into and exit from that parking lot are both located at one location – which is mid-block on Grand Avenue on the West Side between First Street and Temple. The cost of the parking lot is typically $10, depending on when you arrive, but it can be a nightmare getting out after the opera.

Never park on any of the surface streets, even though empty parking spots might tempt you.  You do NOT want to find out why not to park there.

The Luxury Express: For those living on L. A.’s West Side, Tom highly recommends the opera’s new round-trip bus service, the Los Angeles Opera Luxury Express from the West L. A. area, which leaves from the federal building at 11000 Wilshire Blvd., just East of the San Diego Freeway (Interstate 405).  For 15 dollars total cost, you get a round-trip to and from the opera, and can park your car at the federal building, where you board the bus.

Avoid Public Transportation: Your Tipster strongly recommends avoiding taking city buses to and especially from downtown late at night, nor using the light rail Metro lines after performances.  (The Metro Red Line’s “Civic Center” station on Hill Street is one block from the Music Center between Temple and First.)

Plan to Arrive Early: As one would anticipate, traffic coming in and leaving Downtown Los Angeles in every direction is very heavy, so allow plenty of time if you plan to arrive after 2:30 p.m.  If you are really early, you may enjoy the nearby Museum of Contemporary Art at 250 S. Grand Avenue, two blocks from the Music Center.  It has a very good lunch at Patinette (another of Joachim Splichal’s group of elegant Patina Group restaurants, located within the museum).  It is open until 4:30 p.m., later on Thursday evenings.

[Below: Walt Disney Concert Hall, the landmark designed by architect Frank E. Gehry, across the street from the Los Angeles Music Center, photograph by Tom.] 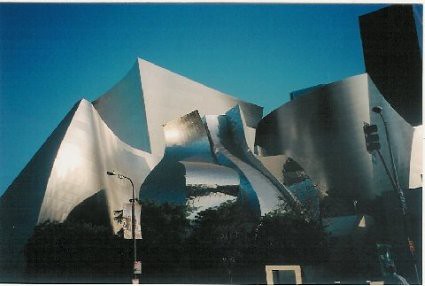 The dining scene at the Music Center is excellent and can accommodate any budget. One of the most elegant and newest is the spectacular Frank Gehry-designed Disney Hall on 1st Street at Grand – directly across from the Chandler Pavilion.  The superb Patina Group’s flagship, the Patina Restaurant (213.972.3331), is located there, with reservations required.  (The Patina Group holds the restaurant and catering contracts with some of the most famous performing arts centers, including not only the restaurants of the Los Angeles Music Center, but the War Memorial Opera House, where the San Francisco Opera performs).

[Below: a view of the Los Angeles Music Center Plaza at night; photograph by Tom.] 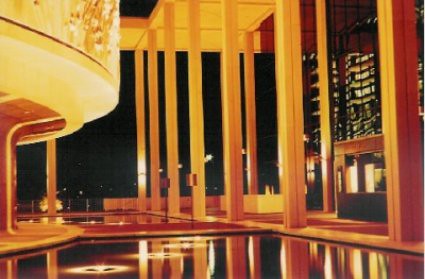 Directly underneath the Chandler is Tom’s favorite restaurant from every standpoint, Kendall’s Brasserie (entrance on Grand Ave., just steps away from the Music Center parking lot).  It is a classic Parisienne brasserie, with dark wood panelling, and the blackboard of information about the current specialties.  It features fresh oysters, clams, lobster and crab, braised shortribs and lamb shank.  Always book in advance (213.972.7322), and be aware that the restaurant is always busy before a performance, although latecomers can usually get service at the elegant bar in a pinch.

In the warm months, a delightful outdoor alternative is the Pinot Grill – facing the gushing fountains and the colossal Dove of Peace sculpture on the Music Center’s vast plaza – featuring a barbeque which is lots of fun and affordable.  It is open year-round (telephone 213.972.3190).  It has great views of the Civic Center, the Chandler, the Cathedral and the classic Los Angeles sights.

Facing the Pinot Grill is the Spotlight Cafe, which features sandwiches and salads to go.  Just take a seat at a table on the plaza and enjoy an inexpensive quickie meal.  Lincoln Center in New York City has nothing like these amenities.  Of all the opera houses in the United States, Los Angeles’ is the best for promoting an environment of convenient nearby dining!

Although none of the other options are really as convenient as the fare in and around the Music Center, there are other options to mention.  Seattle’s famed McCormick and Schmick has a Los Angeles restaurant located in the Library Tower on the fourth floor level at 633 West 5th St (telephone 213.972.7322).  It operates a free opera shuttle.

[Below: a view of the Los Angeles skyline from the Maguire Gardens, outside of the Cafe Pinot; photograph by Tom.] 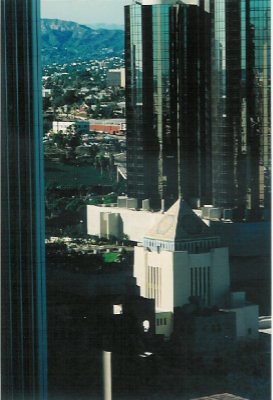 Also nearby is the very lovely Cafe Pinot, an easy and cheap cab ride away, which opens onto the very grand Library’s lush Maguire Gardens and fountains at 700 West 5th and Flower Streets (213.239.6500). It is another Patina Group restaurant and one of your Tipster’s favorites in L. A.

But Tom’s most favorite L. A. seafood restaurant is the incomparable and justly celebrated Water Grill at 544 South Grand (at 5th Street, telephone 213.891.0900).  Use their valet parking.

All in all, you will eventually get accustomed to and actually enjoy Downtown Los Angeles, which is so rapidly changing as the badly needed major urban restoration takes place. (FYI, despite our lavish praise of the restaurants mentioned above, we neither request nor accept goodies or “considerations” from them.  Would we have any credibility if we did?)