In celebration of the Summer San Francisco Opera Season, we are re-publishing Tom’s Tips for enjoying opera in San Francisco.

The grandest opera house in the West -without any doubt – is the War Memorial Opera House.  It is the long-time home of the San Francisco Opera which, for more than eighty-five years, has enriched the West with – again without doubt – consistently the West’s best opera, and on a World-class-scale!

[Below: a view of San Francisco’s War Memorial Opera House, from across Van Ness Avenue; photograph by Tom.] 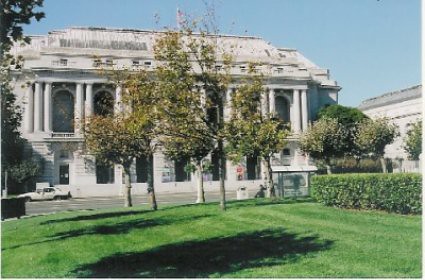 They were presenting true grand opera long before there was any significant opera in Los Angeles, or any at all in Vancouver BC, Seattle, Portland, Santa Barbara, Orange County, San Diego, Phoenix, Houston or Denver!

Your Tipster is a native San Franciscan and the Third Generation of San Francisco Opera patrons, growing up and living there for years, and annually attending their performances for more than fifty years! My opera-adoring San Francisco grandmother often took me as a youngster (in my sailor suit!), and I got hooked! As a personal note, my grandfather’s ornamental iron works company created, built and installed most of the decorative bronze and iron art works in the Opera House as well as for the grand City Hall!

[Below left: San Francisco City Hall, viewed from outside of the War Memorial Opera House (seen at right); photograph by Tom.] 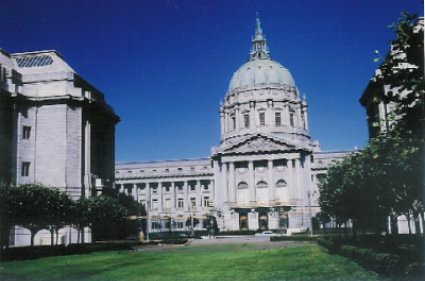 But there’s more: Arthur Bloomfield is also a dining and food author-critic having written the bestseller Guide to San Francisco Restaurants in the 1970s, then in 1987 his San Francisco (and environs) Arthur Bloomfield’s Restaurant Book and most recently his acclaimed memoir cookbook The Gastronomical Tourist: Memories and Recipes of a Bistro Crawler at Home and Abroad (see this at www.TheGastronomicalTourist.com ). We often researched these San Francisco restaurants together and still do!

The majority of Season subscribers and a significant number of intermittent patrons don’t live in San Francisco.  Many of the latter (and visitors to the Bay Area) need some guidance as to arriving, parking, etc. Hence this Labor of Love writing these hometown tips.

The Opera House is on the corner of a major thoroughfare, Van Ness Avenue, at its intersection with Grove Street, across the street from the fabulous architectural gem, City Hall. There is plenty of bus service on Van Ness, stopping right out in front of the opera house. There is a subway (BART) which has a major station at “Civic Center” – this is a three block walk through the Civic Center – not especially inviting late at night after the opera.

The best parking, by far, is in the parking structure to the rear of the House, between one-way northbound Franklin Street (which parallels Van Ness) and one-way southbound Gough Street.  Its main entrance is at 360 Grove ($12) – very secure and convenient. The next-best safe parking is under Opera Plaza, entering on Golden Gate Avenue between Van Ness and Franklin ($18 and 2 blocks away).

Parking under the Civic Center is not recommended at night due to safety. A Tom’s Tip from Experience: Never park on any surface street parking location near the Opera House – car break-ins are now epidemic in San Francisco, so opt for our recommended parking locations – in the long run it’s much more affordable than replacing broken glass. Ditto LA – sorry about this.

If you’re flying in to either Oakland Airport (OAK) or S.F. International Airport (SFO), you can take the fast, safe and convenient BART trains directly to the underground Civic Center station noted above: www.BART.gov.com . Fare from OAK = $3.55, from SFO = $5.35, and fares downtown on Market Street are similar.

Go online to www.SFOpera.com to view the season and order your tickets ASAP at www.SFOpera.com/buy . In my judgment, at the War Memorial, you can’t sit too close to the front orchestra in the middle. Indeed, your main website host, William, sits front-row-center at the left elbow of the conductor!

The telephone number for tickets is 415.864.3330. But if you’re in town and haven’t bought tickets, do pop in the box office in the lobby, and in a pinch and they have nothing you like, often you can do very well out in front of the House “on the steps” where some ticket-holders are holding up available tickets for sale. They can’t scalp under S.F. law. I’ve bought this way innumerable times over years.  (Be sure to have lots of cash.)

Next to the recommended parking structure and on the way to the opera is Jardiniere at 300 Grove Street, on the Northwest corner of Franklin, 415.861.5555 – www.Jardiniere.com – which is superb, fine wines and bar service and couldn’t be more convenient. It is always jammed – booking far in advance is imperative. Everyone has discovered this delight.

An easy block away is a marvellous French Bistro – Absinthe – 398 Hayes St at the Northeast corner of Gough, 415.551.1590 – serving classic Onion Soup Gratinee’ , terrific fresh oysters, wonderful pate’, Cassolet, etc. It is very crowded by the knowing opera and symphony patrons – do your early booking ASAP.

There is a very upscale, very lovely spot just in back of the House at 333 Fulton, the appropriately named Ovation in the elegantly cozy Inn at The Opera, 415.863.8400 – www.InnAtTheOpera.com – quiet, formal service with gorgeous tables of crystal, silver, flowers, etc. It doesn’t get more romantic than this! (Bring money!)

For a true Destination pre-opera Sunday brunch-without-equal, if you’re attending a Sunday Matinee: The Garden Court at the majestic Palace Hotel (built in 1875), 2 New Montgomery St at Market, a short cab ride from the opera (caution: if you’re driving, don’t use valet parking; it’s $25!!). This is, sans doubt, one of the most magnificent dining rooms in the United States! Think marble columns, stained glass-domed roof, immense crystal chandeliers – yours truly learned to dance (at Cotillion!!) in here! Their Sunday brunch has few equals — 415.512.1111, www.SFPalace.com , and that includes the Palm Court in New York’s elegant Plaza Hotel @ 5th & 59th.

[Below: the Garden Court of the Palace Hotel, photograph by Tom.] 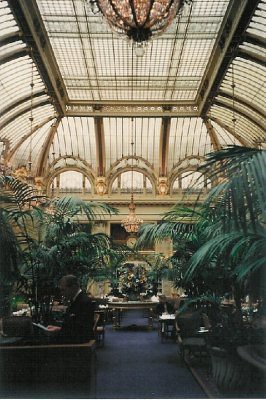 If you’d like to dress down and have a cup of capuccino with the locals along with Pub-grub, try Tosca Cafe, 242 Columbus Ave in “North Beach” (aka home of the the Hippies and Flower Children of the 1960s), where the jukeboxes sing out opera arias! You likely have not heard the voice of Pavarotti in a setting like this!  He himself enjoyed it when in town from time to time!

And if you want to enjoy great Irish Coffee where it was invented, take the Powell-Hyde cable car (the green ones) from Powell Street downtown to the bayfront (best cable car ride in town by far – hang on tight!) to the Buena Vista Cafe at Hyde & Beach.

For unsurpassed, fresh oysters-on-the-halfshell of sublime succulence, head for the famed old Ferry Building at the very bottom (i.e., Easternmost section) of Market Street, on the bayfront. In the North end of this now-fabulous marketplace is Hog Island Oyster Company which is a complete oyster bar with much else (baked too). These oysters are grown North of San Francisco, are incredibly fresh – simply scrumptuous as the late Julia Child would say. BART, the Muni, and the waterfront trolleys all stop in front. With some California chardonnay these are, well, utterly memorable!

Who knows, you might find a pearl, but you will find terrific San Francisco Bay views. Hint: the Larkspur Ferry is right there, which affords a very affordable, spectacular Bay cruise to and from Larkspur across the Bay. This rides gets my ***!

The ultimate glitzy San Francisco bar is on the ground level of the St Francis Hotel on Powell between Geary & Post – go in, turn left, go up three steps, and voila! – it’s smashingly palatial. And the bar with the best view is the famed Top of the Mark, meaning the Mark Hopkins Hotel at California & Mason (big red cable cars in front, which meet with the green ones at California & Powell). 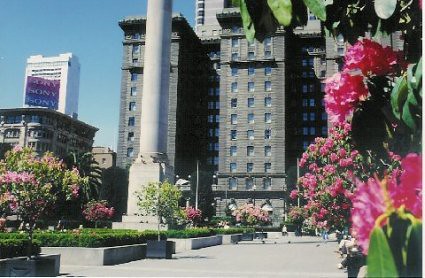 San Francisco is famed for its grande hotels — with grande prices, like the gilded, marble-columned pre-earthquake-fire Fairmont on top of Nob Hill 950 Mason at California (the famed cable cars right there) – 415.772.5000, www.Fairmont.com. This, like the St Francis on Powell, the Sir Francis Drake (also on Powell with cable cars in front), are quite (but not always) expensive. Call – you might be surprised if it’s a weekend when it’s much less than the rack-rates.

All of the national chains are well represented all through S.F. – showing their usual lack of charm with few exceptions, but there is a very attractive, elegant small hotel downtown with very competitive pricing – The Prescott, 545 Post St between Mason and Taylor, looking at the famed Bohemian Club in a fine, safe area loaded with the great stores, galleries and shops. This one is very popular with the Southern California Opera crowd (me too!) – it has a Club Level with a stunning private bar for pre- or post-opera drinks and is a short cab ride from the opera. Inside is Wolfgang Puck’s very popular Postrio restaurant. Incidentally, cabs are much cheaper (and more convenient) in S.F. than having a rental-car -primarily because the cost of parking is extremely high. Also, trying to navigate S.F.’s narrow, one-way streets at night is problematic if you don’t know S.F. well.

Of the affordable chain-accomodations, I feel perhaps the best is the Holiday Inn at Fisherman’s Wharf (1300 Columbus Ave, 415.771.9000) which is in the center of the “action” and close to lots of good nearby restaurants. For great seafood, including the best cioppino in town,try Scoma’s, overlooking the fishing boat fleet on Pier 47, 415.771.4383 – www.Scomas.com. Close by are the highly entertaining Pier 39, and the Cannery and Ghirardelli Square, with many shops and restaurants to explore, two cable car lines, the Maritime Museum, and much else to see and do – www.HolidayInn.com.

There is another Holiday Inn within easy walking distance of the Opera House (0.4 mile), often used by and catering to lawyers and business people, thanks to its close proximity to the Courts and the Civic Center, with good, safe parking. Don’t look for glamour here – it’s strictly business, but affordable, at 50 8th Street, just south of Market Street, 415.626.6103.

For unsurpassed old San Francisco lore – and glamor – the Palace Hotel (noted above for brunch) is a fine selection and can be surprisingly affordable. The rooms are huge, towering ceilings, superbly furnished, worth splurging. The great operatic tenor Enrico Caruso was staying here after he sang Don Jose in Carmen the night before the great Earthquake and fire of April 18, 1906. It is said he fled S.F.- screaming out Italian expletives in his incomparable tenor voice, vowing never to return.  He definitely did not leave his heart in San Francisco . . .!

Above, I noted the cozy-formal Inn At The Opera. The rooms are small but fabulously decorated, and come with a wonderful European style Buffet breakfast. Tops for convenience to the opera (just steps away), along with a lovely dinner and after-opera brandy accompanied by the classics from the concert grand Steinway.

I could go on and on, however there are myriad S.F. guides already, but of the guides I’ve seen, the best, by far, is the Knopf Guides San Francisco (Alfred A Knopf Inc – get it from www.Amazon.com cheap). This is fabulous, but most importantly, the extremely knowing input is by locals and Knopf Guides gets an A+ for their homework. If you don’t know S.F. well, by all means get the Knopf guide, as it will really make your visit memorable.

[Below: one of the towers of the Golden Gate Bridge, from one of the San Francisco’s many points for scenic views; photograph by Tom.] 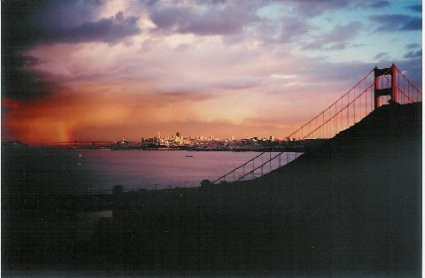 F.Y.I. As always, despite all the recommendations and praise, we neither receive nor accept tips or other compensation from any of these locations — all are based on a lifetime’s personal experience (and that of Arthur as well!) having dined in all of these restaurants often and staying in all of these hotels (and many unmentionable others too!). When I had to leave my beloved hometown, I definitely left my heart in San Francisco . . . .