Long recognized by loyal Wagnerians (a militant breed if ever there was!) Seattle Opera has presented full four-opera cycles of Wagner’s Ring of the Nibelungs for more than three decades.  Starting in 1975, Seattle Opera’s founding General Director Glynn Ross made it happen and did so for the next nine consecutive summers, adding Tristan und Isolde in 1980 and 1981.

[Below: 321 Mercer Street, the home of the Seattle Opera; photograph by Tom.] 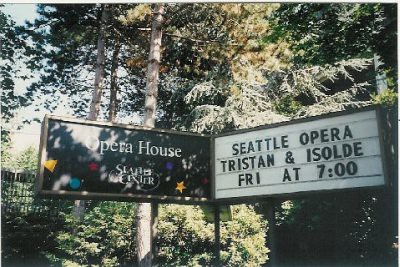 Then in 1983, current General Director Speight Jenkins – an almost equally ardent Wagnerite -succeeded Glynn Ross running  Seattle Opera. In 1986 he presented a brand new Ring with the now famed flying horses (full size horses flying across the stage, ridden by shrieking Valkyries!), and that Ring was repeated in 1987, 1991 and 1995.

Meanwhile, Jenkins added all of Wagner’s remaining major operas, starting with Tannhauser in 1984, Flying Dutchman and Die Meistersinger in 1989, Lohengrin in 1994, a reprise of Tristan und Isolde in 1998 and Parsifal in 2003! All of this was in addition to his regular fall-winter seasons and other summer presentations as well, such as this August’s production of Verdi’s Aida.

Excepting the very first in 1975, I have attended the Ring productions each year they were presented, and I have seen all of Seattle’s other Wagner productions, and other Seattle Opera presentations as well.  Because work has brought me to Seattle et environs for more than 45 years, my Tom’s Tips for Seattle are based on long experience.

This summer (August 2009) Seattle Opera will present three Ring cycles, of Seattle’s very traditional, very “green” sets which premiered in 2001, returning with many improvements in 2005.  These are by far the visually best productions I have seen anywhere – and I have attended Ring cycles at the Met, at San Francisco Opera, Chicago Lyric, Flagstaff Arizona, the Mariinsky/Kirov production seen in Orange County (and reviewed by your website host, William), and at both Berlin’s major companies, Deutsche Oper Berlin (DOB) and Staatsoper unter den Linden.  I also have collected Rings on videotape, laservideodisc (remember those?) and DVDs.

It’s still possible to order tickets for cycles and individual performances of the August 2009 Rings at www.SeattleRing.com or at www.SeattleOpera.org although this year, as in 2001 and 2005 some Ring cycles sold out long before opening night! The audience comes from throughout the United States and at least 18 countries abroad.  A great many Seattle patrons come from Germany, where they are underwhelmed with bizarre Eurotrash Rings so often presented there.  (In Berlin, I attended a musically sensational DOB Ring, marvelously conducted by the renowned Christian Thielemann, but much of it took place in the grubby Berlin subways just after World War II.  It garnered thunderous Booooooos from multitudes (including me).