The Santa Fe Opera chose the Fourth of July to unveil its new Stephen Lawless production of Donizetti’s “L’Elisir d’Amore”. Lawless established the opera’s time and place as several years into World War II, in a small Italian Village, that is in the process of being liberated by the American army. (Ashley Martin-Davis was Scenic and Costume Designer.)

There are three focal points to the stage setting. Dominating the back midstage is a large billboard advertising olive oil. “Elisir della Vita” is its slogan, with the additional notation “Extra Virgin”, which I suppose is a reference to the opera’s hero, Nemorino, as much as to the olive’s pressings. To the audience’s left are wooden doors that store school supplies. To its right is an automobile mechanic’s garage, whose proprietor, Nemorino (Dimitri Pittas), appears to specialize in Italian sports cars, although his own is the only one seen.

Adina (Jennifer Black) assembles the village school kids for a lesson, but soon the entire populace is listening and crowding into the kid’s desks. Nemorino (whose first aria Quanto e bella, quanto e cara Pittas delivered with great aplomb) pushes a hoodless car out of the garage, and wipes off the bumper so that Adina can sit on it. But chivalry soon gives way to jealousy.

[Below: Nemorino (Dimitri Pittas) as Nemorino the Italian sports car mechanic; edited image, based on a Ken Howard photograph, courtesy of the Santa Fe Opera.] 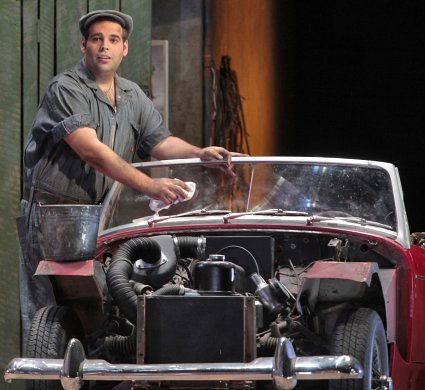 An American army squad arrives in an ailing Jeep, seeking mechanical assistance and girls. The townspeople first mistakenly wave their small Italian flags, but soon realize their error and pull out the village supply of small American flags.

As soon as U. S. Army Sergeant Belcore (Patrick Carfizzi) catches Adina’s eye, Nemorino noisily pulls off the Jeep’s radiator cap to produce a stream of steam, drops his tool boxes and  slams down the car hood. As one of Donizetti’s madcap ensembles follows, Adina and Nemorino accidentally kiss each other in the excitement.

[Below: the American Sergeant Belcore (Patrick Carfizzi) discovers ways to annoy Nemorino; edited image, based on a Ken Howard photograph, courtesy of the Santa Fe Opera.] 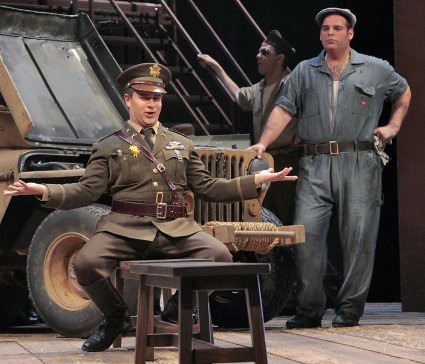 As the populace scatters, an old woman carrying two suitcases, turns out to be Dr Dulcamara (Thomas Hammons) in disguise to elude the Italian police. Scattering leaflets and attracting attention with a scratchy old phonograph record (of course playing the Dulcamara fanfare), he gets the audience he desires to make his sales pitch.

Hammons will likely always remember his first act patter songs in his first Santa Fe Opera appearance in this juicy comic role. Hammons’ Dulcamara  chooses the sign board as the place to be the center of everyone’s attention. Unfortunately, an event not planned by Director Lawless will divide the audience’s attention for a while.

The Opera’s neighbors, the Tesuque Pueblo, is one of the oldest (900 years) and most traditional American Indian settlements in New Mexico. But this evening, to the apparent surprise of everyone in the opera crowd, they decided to celebrate an American tradition – a full fireworks display all the way through a grande finale. Since the Crosby Theater is a covered open air structure, the fireworks were in full view on the audience’s right.

(Had Friday night’s “Traviata” and Saturday night’s Independence Day “L’Elisir” been shown in reverse order, the fireworks would have taken place during Natalie Dessay’s first act coloratura star turn, likely setting off all sorts of pyrotechnical allusions among the reviewers in the first night audience.)

Of course, Mother Nature, over the more than five decades of the Santa Fe Opera’s existence, has added some unintended sound and lighting effects of her own to opera performances, courtesy of New Mexico late evening summer thunderstorms.

[Below: Doctor Dulcamara (Thomas Hammons) reveals that his elixir can cure every ailment known to mankind; edited image, based on a Ken Howard photograph, courtesy of the Santa Fe Opera.] 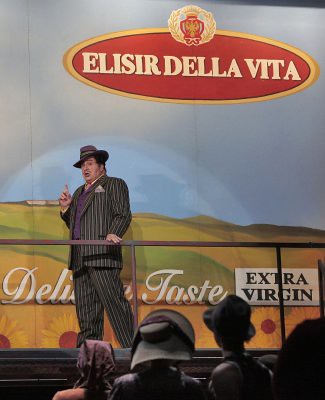 Even with the distraction, or bonus, of the Tesuque spectacle (which, of course, would have been called for if it were the end of Richard Strauss’ “Ariadne auf Naxos”) there was much to like in the first act. Pittas has a pleasing leggiero voice, leading Donizetti’s great ensemble Adina, credemi impressively.  And he proved to be a natural comedian.

Also very funny was Carfizzi’s Belcore. With Pittas at the beginning of his career, and Carfizzi early into his, there is further evidence that another generation of great Donizetti comedians is establishing itself. Hammons, who drew the Dulcamara assignment only a few days ago when John Del Carlo had to withdraw for medical reasons, also made a good first act impression, with Hammons and Pittas hoofing it with the comic timing of old vaudevillians.

[Below: Dr Dulcamara (Thomas Hammons) in a song and dance routine with Nemorino (Dimitri Pittas); edited image, based on a Ken Howard photograph, courtesy of Santa Fe Opera.] 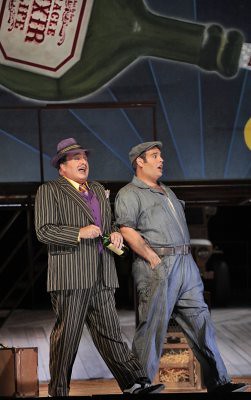 But before Conductor Corrado Rovaris returned to the podium for the second act, the Tesuque entertained the Santa Fe Opera audience with a fireworks coda, with several more rounds shot into the desert sky, and its occurrence at the intermission rather than during the second act made it rather more welcome.

The scratchy phonograph recording of the fanfare returned, although Dulcamara turned over the record to start the barcarolle. A priest arrives on a Vespa, but Adina has cold feet and postpones the festivities for a while. Nemorino enlists in the American army (that bit of Lawless timeshifting seems implausible, but this is Donizetti comedy), obtains the money he needs for another dose of love elixir, and, in his upbeat state, finally completes his car repairs.

Without any of the main characters knowing about it, the ladies of the village learn that Nemorino has inherited a fortune. They move into formation, putting on lipstick and rouge and lining up each others’ nylon seams. When Nemorino drives his car out of the garage, the women crawl over and into his car.

[Below: are the town’s womenfolk suddenly attracted to Nemorino because of a magic elixir, or because they have found out he is now a millionaire?; edited image, based on a Ken Howard photograph, courtesy of the Santa Fe Opera.] 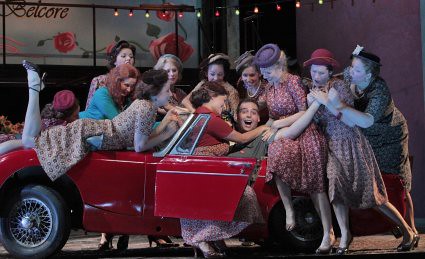 He escapes and the entire stage is filled with girl fights. Jennifer Black’s Adina glances at Dulcamara’s elixir bottle, pulls off the elixir label to find a label for red wine underneath, and, within a few moments, grasps the situation and decides what must be done.

Una furtiva lagrima, Nemorino’s anthem that assures this opera’s coveted warhorse status, was enchantingly sung – and made special with its touch of Pittas’ pleasant tenor vibrato. Dressed in his American soldier’s uniform, he covers and kisses his sports car. The highlight of Black’s evening is her aria, Prendi, per me sei libero. In the rousing finale Nemorino and Adina pull the cover off the car and secure the priest’s services, while Belcore finds another woman in the crowd to whom to turn his attentions.

[Below: Adina (Jennifer Black) discovers that her true love is Nemorino (Dimitri Pittas); edited image, based on a Ken Howard photograph, courtesy of the Santa Fe Opera.]

The Lawless production is yet another worthy reading of this enchanting romantic comedy, the second most famous Italian comic opera after Rossini’s “Barber of Seville”, but with characters who seem  to have the human qualities not always present in “Barber”. (The Donizetti comedy does not have a Mozart sequel in which we learn that the tenor lover turns out to be a philandering scoundrel and a baritone, as well.)

As noted in a recent website feature, this is a year for Donizetti comedies in the United States, as economic pressures make many operas seem especially risky (See: In Quest of Donizetti – A 2009-10 Update).  “L’Elisir d’Amore” is an increasingly popular opera, for which good casts can be assembled, in productions that can be brought in within a reasonable budget. The Santa Fe Opera production is a festive one, that abounds in amusing gags, and should bring cheer whenever it is shown.