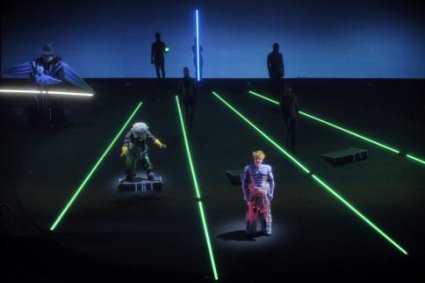 During a 12 month period in 2007 and 2008, California’s three major opera companies each created a production of Wagner’s “Tannhauser”. In the period between Summer 2008 and Summer 2011, the companies of San Francisco and Los Angeles are absorbed in producing the four operas of Wagner’s “Ring des Nibelungen”.

San Francisco’s effort was planned to be in concert with the Washington National Opera, beginning with “Rheingold” in Summer 2008, but skipping an entire calendar year for a “Walkuere” scheduled for Summer 2010, with a full “Ring” in Summer 2011. The schedule for the Los Angeles “Ring” is more compact, beginning with its new “Rheingold” in February 2009, the next two operas in April and September 2009 and the final opera in April 2010, with three separate performances of the entire  “Ring” scheduled for May and June, 2010.

Los Angeles Opera, whose general manager is the world’s most famous Siegmund in Wagner’s “Walkuere”, had never mounted Wagner’s four opera “Der Ring des Nibelungen”. With James Conlon in place as Principal Conductor and Music Director, not only was “The Ring” a priority, but a new production by the inventive German production designer Achim Freyer was commissioned.

Conlon conducts. Vitalij Kowaljow (Wotan), Arnold Bezuyen (Loge), Gordon Hawkins (Alberich) and Michelle De Young (Fricka) have the major roles in the prologue to the “Ring”. In Freyer’s conceptualization, each character has multiple forms, and these forms may be performed by the artist singing the role, or as an avatar played by a member of Freyer’s Ensemble, a group of actors and dancers who supplement Wagner’s story in a myriad of ways.

[Below: Freia (Ellie Dehn) with the giants Fafner and Fasolt who built Valhalla; edited image, based on a Monika Rittershaus photograph, courtesy of the Los Angeles Opera.] 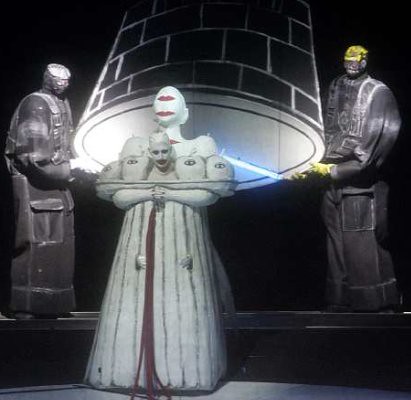 Placido Domingo’s legendary Siegmund assures box office buzz, but joining him is a stellar cast, including Anja Kampe as Siegmund’s twin sister, Sieglinde and Linda Watson as Bruennhilde, the Valkyr whose heart he turns. The gods are represented by the excellent Vitalij Kowaljow as Wotan and Michelle DeYoung as Fricka. Eric Halfvarson is the Hunding. Conlon conducts.

[Below: Wotan, his spear in hand, penetrates Bruennhilde’s protective circle created by her eight Valkyr sisters; edited image, based on a Monika Rittershaus photograph, courtesy of the Los Angeles Opera.] 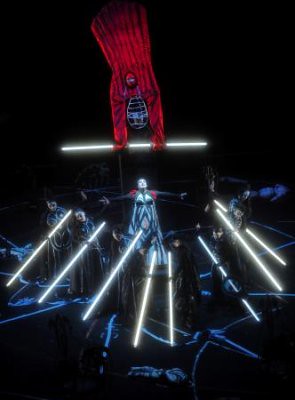 Wagnerian heldentenor John Treleaven, Los Angeles Opera’s Tristan for its “Tristan und Isolde” in January 2008, returns for the title role of “Siegfried”. Returning in roles seen earlier in the “Ring” are Linda Watson (Treleaven’s Isolde) as Bruennhilde, Vitalij Kowaljow as the Wanderer – Wotan’s incarnation when on Earth – and Eric Halfvarson as Fafner, who during the interim between “Rheingold” and “Siegfried” has turned into a dragon.

Graham Clark is Mime in both “Rheingold” and “Siegfried”. The role of Mime in the latter opera is the longest of any character except Siegfried himself. Oleg Bryjak replaces Gordon Hawkins in the role of Alberich. Conlon again conducts.

[Below: a scene from the Achim Freyer  production of Wagner’s “Siegfried”; edited image of a Monika Rittershaus photograph, courtesy of the Los Angeles Opera.] 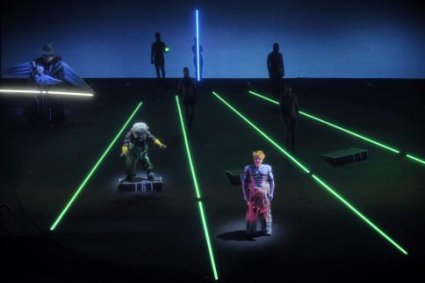 John Treleaven and Linda Watson are cast as Siegfried and Bruennhilde. Conlon presides over what many would regard as the most richly orchestrated and most spectacular of all operas. Two important Los Angeles Opera debuts, Alan Held (Gunther) and Jennifer Wilson (Gutrune), play the Gibichungen.

Gordon Hawkins is back as Alberich, and Eric Halfvarson, having been cast as the “Rheingold” and “Siegfried” Fafners and Hunding in “Walkuere”, assumes the meaty role of the dour Hagen.

[Below: Siegfried (John Treleaven) has recovered his memory of his bride Bruennhilde; edited image, based on a Monika Rittershaus photograph, courtesy of the Los Angeles Opera.] 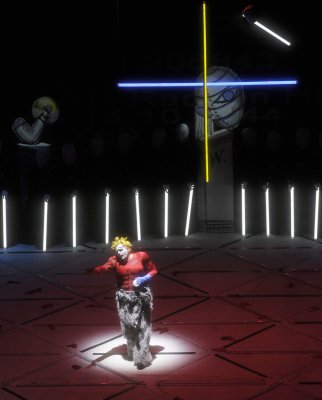 Los Angeles Opera, in collaboration with major Los Angeles cultural institutions, will sponsor a “Ring Festival”, billed as the first major multi-institutional cultural festival since a similar effort in 1984 held concurrently with Los Angeles hosting the Olympic Games. The artists who participated in each of the four operas of the “Ring” will return to Los Angeles for three complete Ring cycles.

Donald Runnicles returns from his new assignment at the Deutsche Oper Berlin to conduct the second installment of Francesca Zambello’s “American Ring” which abounds in striking images. 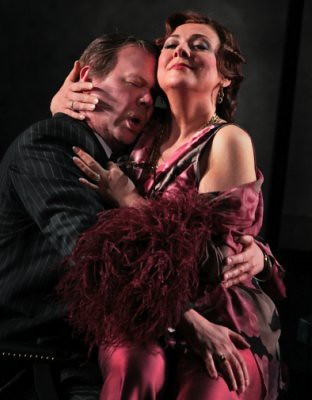 Returning to San Francisco for the title role is Nina Stemme, who, so far, has only sung Senta in Wagner’s “Fliegende Hollaender” at the War Memorial. Christopher Ventris, another Wagnerian who has rarely sung in San Francisco, is the Siegmund, with Eva-Marie Westbroek in a San Francisco debut as Sieglinde.

For this website’s review of this production, when it was first mounted by Washington National Opera, see:  Zambello’s Dazzling “American Ring ‘Walkuere’” at Kennedy Center – March 28, 2007

For a previous post in this “Quest and Anticipations” series, see: California Does Wagner – 2008