This post is the first in the series of three Tom’s Tips on opera-going in Northern Germany. This post will highlight Cologne (Koeln), followed by the Tom’s Tips for Hamburg and Berlin. Interspersed between the Tom’s Tips will be William’s reviews from the Hamburg Staatsoper (See Michael Schade, Nmon Ford, Gabriele Frola Brilliant in Hamburg’s New “Death in Venice” – April 19, 2009), Berlin Staatsoper, and Deutsche Oper Berlin.

Your Tipster Tom has been in these cities many, many times and has lived in Germany, attending opera whenever possible, which is often in this country absolutely crazy about opera.

Way back in 33 BC sword-bearing Roman legionaires arrived on the banks of the Rhein River, laying siege to the locals, creating a new Roman Colony – the people involved in this venture are of note: Julia Agrippa (Roman General Germanicus’ daughter) married emperor Claudius (remember the BBC’s TV series I, Claudius?) and ultimately by Imperial Decree this colony came to be called Colonia Claudia Ara Agrippinensium – aka Cologne.

[Below: a view of the Rhein River’s West Bank with the historical city of Cologne in the foreground; edited image of a Ventura Carmona photograph for the European Union Travel organization.]

This evolved into a major Roman center of power, although they also seized much more land north, including earlier at Trier on the banks of the Mosel River and in Frankfurt.

Cologne, having a truly strategic location on the main-trade-route Rhein in South-Central Germany, became a very large city of commerce – and religion. One of the greatest Gothic cathedrals in all Christendom grew up here, the stupendous Cologne Cathedral (Koelner Dom) started around 1248 and not finished until 1880 or so (still not finished . . . ); it is utterly spectacular and dominates the skyline from the river.

[Below: the Cologne Cathedral; edited image of a photograph by FJK71 in accordance with GNU Free Documentation.] 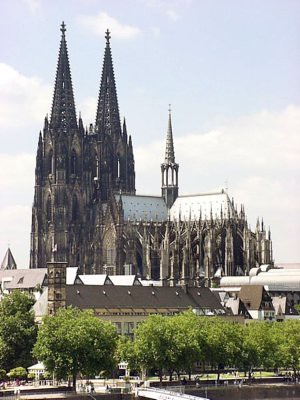 The statistics are amazing: the interior length of the great cathedral is a football field length plus another 172′! It’s 142′ high inside and the magnificent towers are 515′ – the tallest of any church in Europe.

Much change has taken place in recent years to improve the hastily rebuilt city of which 90%+ was destroyed in World War II. Thus, the part of town where the opera house is located is almost entirely “new” (i.e., just over a half-century old) as is most of the old city, except some remnants of the many large churches.

Much of the rebuilt areas reflect this budget-no-frills construction, but they are indeed making embellishments constantly, many being restored to look like the “olde days” before World War II.

Getting to the Opera

The Opera is at Offenbachplatz # 1 around which are other theaters, including the Grossstaedtische Repertoiretheater. There is adequate and well marked parking in this area to which you could easily walk from the old town (1/4 -1/2 mile).

[Below: the Cologne Opera House at Offenbachplatz; edited image, based on a photograph by Naatiu.] 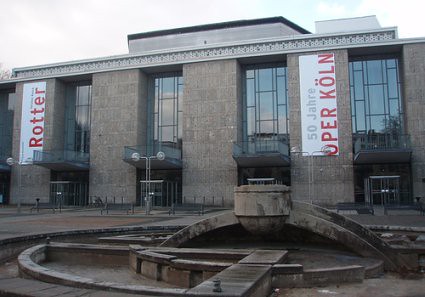 Just go to the south end of the old city hall – Altes Rathaus – and its delightful Market Square, and head due west on Obenmarspforten Strasse going past the 1950s controversial-modern St Kolumba church on your right.  Keep going and Offenbachplatz will be on your left. Phone 22 10.

This is beer country and the locals enjoy suds immensely in the many Beergardens spotted about town and especially along the riverfront (both west and east banks) watching the traffic of huge, riverboats, which is most colorful.

The beer steins are immense too – don’t be alarmed when the locals bang these on the wooden tables for more!! Try the Brauhaus Goldener Pflug at Olpener Strasse 421, 310 56 31 www.brauhaus-goldener-pflug.de which is what you’d expect a German beer-pub to look like, with excellent rustic-local fare.

Another of this genre – for centuries – is Em Kruetzche at Am Frankenturm 1, 258 08 39 www.emkruetzche.de . Look for the picture of the day in 1999 when Bill Clinton, Tony Blair and eight other heads of state dropped by for a meal!

For one with knock-out views from across the river from the Dom is at the Hyatt Regency Hotel’s Beer Gardens which is just across the big bridge by the Cathedral (Hohenzollern Bridge). Their restaurants are also fine, all at Kennedyufer 2, 828 12 34.

This is where your Tipster brings guests! Pull them up at www.cologne.regency.hyatt.de . Incidentally, you can walk across that big bridge adjacent to the Dom, which is the Hohenzollern Bridge – tote your camera, the photo-ops are stunning!

For dining in the grande tradition is Hanse Stube in the elegant (and expensive) Excelsior Hotel Ernst, @ Trankgasse 1, 270 34 02 www.excelsiorhotelernst.de .

But for fun and local color, try the market squares by the old Rathaus which have everything for you on-the-hoof, such as my favorites: sausages roasted on the wood-coals with local mustard washed down with local dark beer! If you’re lucky, there will be a local ooom-pah-pah band livening the scene!

My hands-down favorite (and where website host William stays) is the Hyatt Regency noted above. It’s a fabulous location, best views, affordable, easy access and good food. All the usual chains are in Cologne, some eminently forgettable.

[Below: the view of the Gross St Martins (left) and Cologne Cathedral (right) from the Hyatt Regency’s promenade on the Rhein’s East Bank.] 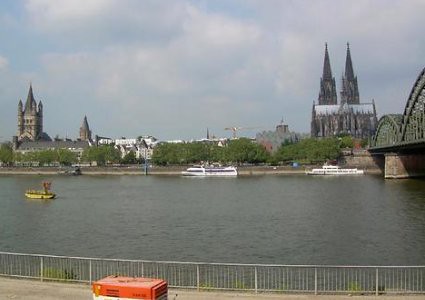 Right by the great cathedral is that Hotel Excelsior Ernst noted above, but bring money – do call them (27 01) as I have secured much cheaper rates.

Very popular with many Americans is the hotel in the watertower – Hotel in Wasserturm – @ Kaygasse 2, 200 80 which has a fine restaurant on the top (11th) floor affording terrific views (bring your camera) and elegant cuisine.

Everyone sees the three-star worthy great cathedral first – so should you! It’s one of Europe’s most imposing Gothic creations lovingly preserved despite all the horrors which occured all around it in World War II.

Adjacent is a first-class museum of Roman antiquity, the Roman-German Museum built on the foundations of a Roman mansion. Very close by is a superb museum of art – the Wallraf-Richartz Museum @ Martinstrasse 39 loaded with paintings by such masters as Rembrandt, Tiepolo, Boucher, Albrecht Duerer, Renoir, Cezanne, Monet, Van Gogh, Gauguin (but, oddly, none of mine!).

A short walk south is the imposing, castle-like Gross St Martin church which you can’t miss seeing from over at the Hyatt – it’s just to the left of the Dom. The Monastic Brothers and Sisters of Jerusalem now reside at Gross St Martin, and provide a stunningly simple and beautiful choral prayer service with Matins at 12:30 p.m. and Vespers at 6 p.m. These are sung as German Gregorian chants and, although it is a religious service, it is open to the public.

There are some delightful short river cruises too. If you can schedule it, consider a KD (Koeln-Dusseldorfer) Rhein riverboat cruise upstream (South) to the quaint medieval looking town of Linz am Rhein. It is a 5 hour 20 minute cruise to Linz, passing along the Rhein at the interesting industrial town of Wesseling, the previous West German capital of Bonn, and the resort town of Koenigswinter, among others. Consider having a late lunch in Linz. You can return in an hour or less on trains from Linz back to Cologne.

But in the three-star, not-to-be-missed category is the sensational country chateau-like palace Bruehl, aka Schloss Augustusburg www.schlossbruehl.de 8-11 miles south of town (depending where you’re staying), many tours available.

[Below: an interior of the Palace Bruehl, photograph by Tom.] 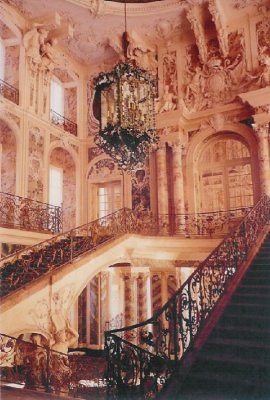 This screamingly-wild rococo fantasy is the concoction of Francoise de Cuvillies, without doubt the architectural Mozart of his era. The grounds are Versailles-like, but the interior rooms are so over-the-top gilded-grand as to make the rooms at Versailles itself look under-decorated!

Cuvillies did opera houses too all over Europe, including at Versailles, Munich, St Petersburg, etc. Don’t miss this – the staircase (Treppenhaus) is exceeded by very few anywhere, which we picture (above) for your enticement.

If you’re driving, by all means get a map of the city and the area – these are readily available. Driving is very easy and comfortable and there is plenty of easy parking is in the city.

Caveat: If you’re driving across the inner city bridges into the city, exercise extreme caution as everyone has their camera out the windows taking pictures (really good views coming in) paying no attention to driving. Fender-benders are constant.

Caveat 3: As in Berlin, you must have a parking meter machine receipt wherever you park in the inner city other than the parking structures or lots. Look for the Parkschein machine, one for each block. You put in Euros for the amount of time you want, and then place your receipt which shows everything behind the windshield on the dashboard where the metermaids (they’re everywhere) can read it. Parking without this is verboten!

Cologne is a city reeking with tradition, good local food and good cheer. The locals cherish the good life, and reflect that lifestyle.You’ll thoroughly enjoy being here, and then exploring more of Germany from here, like the former capitol Bonn just to the south, a very lovely, easy drive, where Beethoven was born (excellent museum). Have fun!