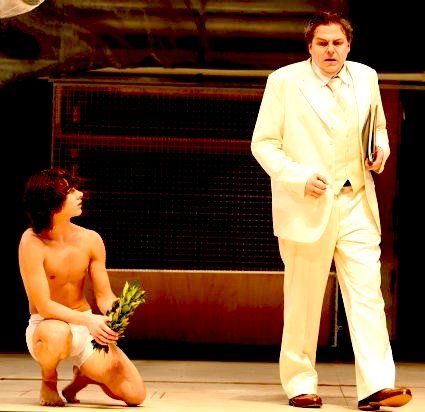 Hamburg Staatsoper’s general director Simone Young continues on her cycle of new productions of Benjamin Britten’s works, that has previously included “Billy Budd” and “Midsummer Night’s Dream”. Her third new production is “Death in Venice”,  a co-production with the Volkskoper Vienna, where it will be mounted subsequently.

For the opera’s lead, Gustav von Aschenbach, Young had one person in mind, the tenor Michael Schade, who possesses a lyrical voice that shines in such assignments as Nadir in Bizet’s “Les Pecheurs de Perles” (See this reviewer’s Zandra Rhodes’ New Look for Bizet’s “Pearl Fishers”: San Diego Opera, February 27, 2004), but who is also a consummate actor.

The role of Aschenbach is an operatic rarity in how totally the part dominates the opera. He is in every scene of Britten’s final opera, and is never more than briefly out of audience view. Schade produced a nuanced portrait of an austere intellect, wracked by physical and mental stresses. He mastered the high tessitura of the role, sung with the beauty with which he approached the tenor part in Bizet’s youthful opera, but he also met the demands of Aschenbach’s lower range, including its tricky sotto voce passages.

For the opera’s principal baritone role, the Traveler, Young turned to Nmon Ford, who, early in what likely will be a distinguished career, has become something of a Britten specialist, portraying the title role of “Billy Budd” and Demetrius in “Midsummer Night’s Dream” under Simone Young’s directorship. Young’s faith in Ford’s dramatic powers was well placed, as he, like Schade, presented a powerful image in this mysterious role.

[Below: Gustav von Aschenbach (Michael Shade) and the Traveler (Nmon Ford); edited image, based on a Joerg Landsberg photograph, courtesy of Hamburg Staatsoper.] 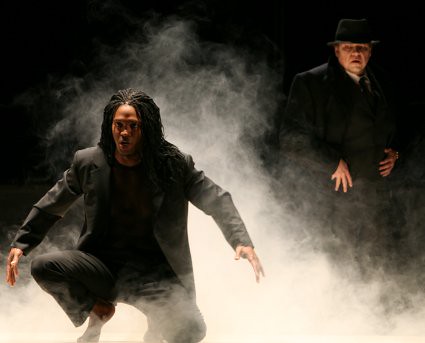 The part of the Traveler, which comprises several characters intended to be played by a single artist, provides a wide-ranging series of scenes that sometimes seem based in reality (even if sinister forces lurk beneath the facade of normal activity) – an officious hotel manager, an obsequious barber, an obstreperous gondolier – and sometimes are manifestly surreal.

In the surreal scenes, Ford is sometimes humorous and flirtatious with Aschenbach, and alternately demonic. Ford provides a credible performance for each of his characters, each of which requires its own individual style of singing.

[Below: Aschenbach (Michael Schade) is disturbed by information from the solicitous Hotel Manager (Nmon Ford); edited image, based on a Joerg Landsberg photograph, courtesy of Hamburg Staatsoper.] 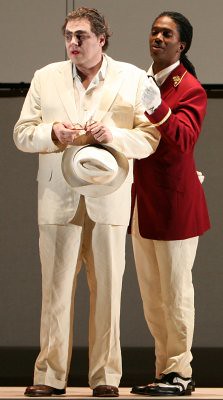 This review will not attempt to provide this reviewer’s ideas of the opera’s meanings. (Later essays on key Britten operas on this website will tackle that subject.) However, this is the third new production of a Britten opera reviewed here in the past eight months, each with an absorbing take on the opera being mounted – and elements of this production are particularly noteworthy.

The opera is one that, I suspect, many people find inaccessible and it can be characterized as one the 20th century’s undervalued works, in that the rewards it can provide to those who study it closely are substantial and perhaps unexpected.

Hamburg’s Staatsoper is the theater (along with the opera company of Cologne) that co-premiered another undervalued work, Korngold’s “Die Tote Stadt”. That opera also revolves around death and obsession and incorporates long, hallucinatory dream sequences.

The “Death in Venice” production designer, Ramin Gray, and his collaborating costume designer Kandis Cook, populate the “real world” scenes with costumes of a variety of hues. The hotel staff and other “travel industry” characters are dressed in unprepossessing black, brown and tan costumes. The children at play on the beach are in multi-colored swimming trunks, with the occasional girl in sun dresses and the like.

[Below: Aschenbach (Michael Schade) is surrounded by hotel staff and others who provide services to tourists; edited image, based on a Joerg Landsberg photograph, courtesy of Hamburg Staatsoper.] 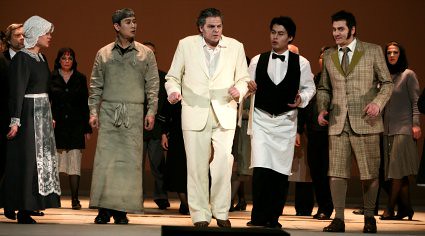 In the “real world” scenes two characters consistently are garbed entirely in white. Aschenbach wears his white shirt, vest, suit and hat. The boy Tadzio wears white trunks (that seem more like an undergarment from some Italian menswear firm than something one would actually wear in the ocean).

[Below: Aschenbach (Michael Schade) observes the children at play on the hotel beach; edited image, based on a Joerg Landsberg photograph, courtesy of Hamburg Staatsoper.]

The Tadzio in this production, Gabriele Frola, is a 17-year old ballet dancer who looks younger than his age and might remind one slightly of Joe Jonas, the second of the Jonas Brothers. Thom Stuart’s choreography was especially athletic, incorporating gymnastics as well as dance.

One of the characteristics of Gray’s production is the use of a much larger group of children than one usually sees in productions of this opera, whose ages range from Frola’s to some smaller boys who appear of grade school age.. The kids of both sexes engage in the beach games, but in the  dream sequences, just the boys take part.

In the surreal scenes, the boy’s bodies are all shaded a ghostly white, excepting Tadzio, who appears in a natural skin color. The colored swimsuits are the fashion of the real life sequences. In the dreamworld all the boys of every age wear white swimwear similar to Tadzio’s. The boys engage in gymnastic games and Tadzio is triumphant. Tadzio is awarded a victor’s wreath, which he drops – to be retrieved by Aschenbach, who returns the wreath to him. 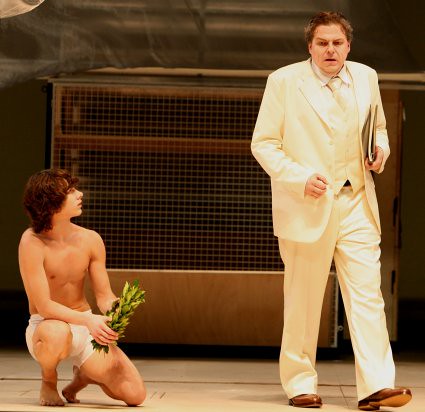 The dream images recur with increasing frequency, as Aschenbach slips in and out of reality. The always silent Tadzio exchanges glances with Aschenbach and wears a white suit. 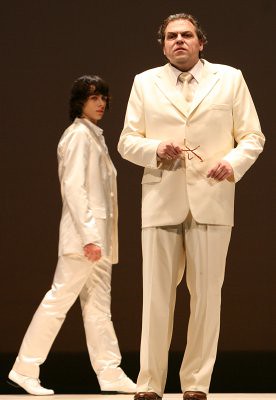 Apollo (played by counter-tenor David DQ Lee) descends from the sky to observe the beach pyramid created by the ghostly boy gymnasts, to whose top Tadzio ascends. 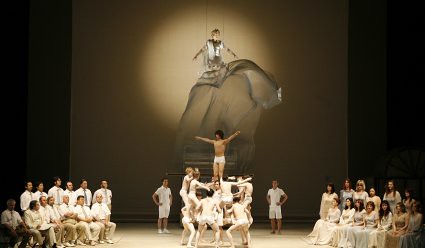 In the end, when in the real world  increasingly believable rumors of a cholera epidemic has caused a depopulation of the hotel, Aschenbach’s hallucinations have taken him over completely, as the Traveler, holding an inert Tadzio on his shoulders, forms a trinity of figures with Aschenbach.

[Below: The Traveler (Nmon Ford) brings Tadzio (Gabriele Frola) to the dying Aschenbach; edited image, based on a Joerg Landsberg photograph, courtesy of Hamburg Staatsoper.] 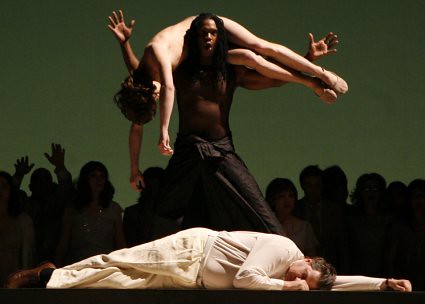 The sets, by Jeremy Herbert, utilize the bare stage. Two machines that resemble the paddle wheel of a Mississippi River steamship are usually present at the left and right parts of the visible stage, but will reposition for particular scenes. A backscrim will serve to silhouette the movements of such symbolic characters as the gondoliers, or Tadzio and his Polish family.

In the surreal scenes (which increase in duration and intensity as the opera progresses) a circle of dark sheer curtains may on occasion descend midstage, through which Aschenbach and the Polish family wander,  seeming to allow Aschenbach the opportunity to interact with them without his actually doing so.

The beach scenes are particularly effective, beginning with a simple game of leapfrog, but progressing to a delusional scene where all the children are blowing bubbles as one of the paddlewheels spew forth a long cloth that glides above the children’s heads. Similarly, the scene of the play, on a makeshift stage ringed with colored lights, is imaginative, providing Ford further opportunities to play his mind tricks with Aschenbach.

Kudos for a triumphant production go to Simone Young, who not only conceptualized and cast the production, but conducted it as well. Her production designer, Ramin Gray, brought new ideas that helped illuminate the work. The use of younger children worked well, with only two of the older boys (including Frola, the Tadzio) actually trained in ballet helped sharpen the presence of the children in the “real world” independent of Aschenbach’s fantasies. After all, in “real life” play, not every child moves in ballet steps.

[Below: In one of Aschenbach’s dream sequences, Tadzio (Gabriele Frola) takes a peek at what Aschenbach has written about him; edited image, based on a Joerg Landberg photograph from the Hamburg Staatsoper.] 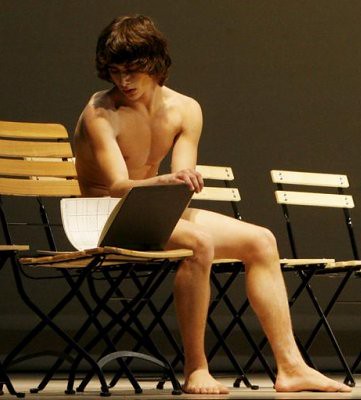 However, this opera’s success is dependent on the effectiveness of the Aschenbach, the Traveler and the Tadzio in their roles, and the Hamburg Staatsoper team proved entirely successful, and is highly recommended.

For those who wish to correspond with us on our remarks relating to the Hamburg Opera “Death in Venice”, the other Britten works reviewed here, or on any other of our postings, are invited to write us at [email protected]

Selected responses will be included in future “correspondence pages” to be published in the future.