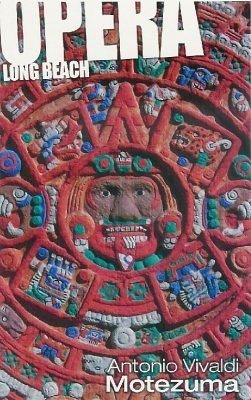 Every once-in-a-while some long lost masterpiece-manuscript of a great composer’s music is remarkably re-discovered, usually in some long-forgotten, dusty attic. So it happened in with an epic-opera by the great Antonio Vivaldi (Italian 1678-1741 – think his Four Seasons heard almost daily on every classical music radio station in the world!!!), which is receiving its American Premiere in celebration of Long Beach Opera’s 30th Anniversary. (The Long Beach company has been presenting superb opera since 1979, longer than any other Los Angeles area Opera organization!

The opera is “Motezuma” – lost for 269 years – operatically presenting the Spanish conquistador Hernando Cortes’ conquest of Aztec Mexico City ruled by the great emperor Montezuma in the 16th Century. By far the largest urban center in North America at the time and then capital of a fabulous empire-civilization whose spectacular monuments throughout Mexico included the largest single man-made structure on earth – the famed Pyramid of the Sun.

[Below: the handbill for Vivaldi’s “Motezuma”, whose American premiere was presented by the Long Beach Opera.] 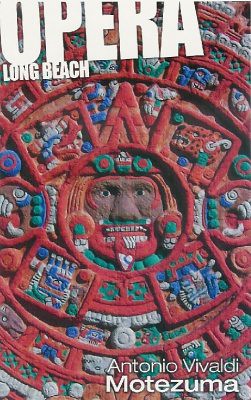 Indeed, in this tradition LBO is presenting “The Emperor of Atlantis” by Viktor Ullmann (appropriately performed in the hull of a great ship which traversed the Atlantic: The Queen Mary !!) and an opera by Carl Orff, the composer of the fabulous (and often heard) “Carmina Burana”, which is “Die Kluge (The Clever One)”, both coming up May 8 and 17, 2009. Tickets at 562.432.5934 and www.longbeachopera.org .

LBO did a spectacular, highly condensed Wagner “Der Ring des Niebelungen” which I loved – it captured what the Ring is about, but saving one’s derrier from 17 1/2 hours in the opera-seat – and at a tiny fraction of the cost!! Unlike LA Opera’s recent 2 hour and 50 minute non-stop (no intermissions-bladder-buster) “Das Rheingold”, LBO’s could be measured in a portion of an hour!! Many who attended felt this is the way to go!

How fitting that now, 300+ years after Montezuma  – the great Emperor of the Aztecs – was vanquished by Cortes (and his steel-helmeted, firearms-toting brigands), that this New World Caesar comes to Long Beach for revenge. Here the flag of Hernando Cortes’ Imperial Spain flew, and then that of Mexico flew also, until the Yankees came and hoisted the Stars & Stripes.

Spain claimed virtually all of the West Coast of North America from Panama to Seattle, putting ashore the Missionaries, and soldiers to support them, to found California’s famed Missions, three of which surround Long Beach – one south at gorgeous San Juan Capistrano, another huge one east in San Gabriel, and the third north in San Fernando named after St Ferdinand, King of Spain!!

Mexican Governor Pio Pico held sway just upstream from Long Beach!  Spanish galleons have been found in adjacent waters!  Indeed, perhaps clairvoyantly, the early Spanish explorers sailing by Long Beach and LA Harbor dubbed the area the Bay of Smokes – which LA can be BBigTTime. One of these early explorers (Cabrillo), indeed is buried on one of California’s offshore islands.

This LBO production is presented in collaboration with one of California’s top Baroque musical ensembles, Musica Angelica Baroque Orchestra whose 17 musicians for this piece were conducted by LBO’s El Jefe Andreas Mitisek, with the set designs by Alan Muroaka.

Appearing as the great Aztec Emperor Motezuma (aka Montezuma to US schoolkids) is Robert Gomez opposite Fernando (aka Cortes in reality) commanding General of the Spanish conquistadores sung by countertenor Charles Maxwell along with his younger brother Ramiro, sung by Ms Peabody Southwell, Caroline Worra appearing as Asprano, Commander of the Aztec armies, Motezuma’s wife Mitrena sung by Cynthia Jansen and their daughter Teutile performed by Courtney Huffman.

The story starts about 1519 after Motezuma’s armies have been conquered by Hernan Cortes in Mexico City, but Cortes’ agents are searching for Motezuma who gives his wife and daughter suicide-daggers in case they should be captured. But alas, Motezuma’s daughter Teutile is in love with the enemy-general’s son Ramiro (a la Romeo et Juliet). But the Spanish general Fernando arrives on the scene and takes her hostage. In rage, Motezuma fires an arrow at Fernando who is wounded – ordering his brother to track down his assailant who meanwhile escapes by diving into the surrounding waters.

In a classic operatic confrontation scene, Teutile accuses Ramiro of romancing her for his own gain — she demands the Spanish armies to withdraw. Ramiro must decide between love and duty. Duty wins, in the best operatic style. A very complicated, action-filled drama ensues between these protagonists, with the inevitable single-handed combat scene between Motezuma and Fernando with Motezuma about to lose, who orders his soldiers to come to the rescue, seizing Fernando.

Dramatizing the Aztec theme enormously is a scene in which Teutile and a significant Spaniard – namely Fernando – must be sacrificed to appease the infuriated gods of Mexico, such as the distinctly unsympathetic Aztec god depicted on LBO’s program we show.

At the dramatic end – in totally operatic tradition – Fernando has escaped and is triumphant but blessed with magnanimity, decreeing that Motezuma and his wife Mitrena shall rule Mexico – but now as part of  of Imperial Spain. Fernando then announces his return to Spain – leaving his brother Ramiro behind as hostage so that he and Motezuma’s daughter Teutile can marry.

Everyone presumably lives happily ever after – unlike virtually every other opera involving high-action-weapon-swinging protagonists, none of them gets a dying scene – with all those great opportunities for consummate “I’m dying” music, since none of them dies!!!

But we know, of course, Mexico becomes a Spanish colony speaking Spanish and all things pervaded with Spanish culture, architecture, religion and traditions — and the indigenous languages/cultures/religions, etc essentially disappearing!!

The Center Theater in the LBPAC Complex is a thrust-stage house, i.e. the stage comes forward into the audience from the rear stage so that the audience surrounds that thrust stage about 180 degrees –  a very popular configuration in Europe for smaller houses. The orchestra was to the rear of, and on, the stage with Mr Mitisek’s harpsichord with the other musicians, from which he very ably conducted this superb ensemble.

At the intermission I was able to improve my seat to a closer, dead-center view of the thrust stage leading to my recommendation for seating in this house: you want to be as centered and as close as you can get!!

Before the opera started, an attendant brought a sealed envelope up to Mr Mitisek: opening it Academy Awards style, we hear it’s a letter from Antonio Vivaldi himself expressing his pleasure that after so many years, his creation Motezuma could be heard and seen again. Oh, Mr Vivaldi also asked that all cell-phones (prolific in his day, no doubt) be turned off, and yes, please contribute what you can to help the cause, signed your most obediant and humble servant!! Very touching!

Projections on a large screen above the stage action were used to great effect throughout the production, announcing the various arias, with much action depicted in motion-picture sequences. On stage at the beginning – in a museum-like setting – were four large glass cubes, one containing the firearms of the invading Spanish, another the spears of the Aztecs, a third with a magnificent feathered Aztec headress, and the fourth with magical wand-like symbol-bearing scepters used throughout the opera by nearly everyone.

The design concept was to initially show these artifacts museum-style – coincidental with a show on Aztec culture presently at the LA County Museum of Art (LACMA). However one doubts many in the audience saw that show!

As the opera opens in a museum, tuxedo’d waiters are serving champagne from silver trays in lovely flutes to the six protagonists – all of whom were originally dressed in current street-garb, as they examine the artifacts. As the opera proceeds, each cast member gradually morphs into another character appropriate to the story-line.

All of the singing was written and presented as solo arias offered by each member of the cast as “set pieces”, with but one trio and a short chorale at the end, with much spoken dialogue in between, all very much sparked with comedy salted with  hilarious slapstick (clearly not Vivaldi’s idea) which greatly helped keep this long (3 1/2 hours) piece moving.

Indeed, we see the characters communicating with cell-phones! Plenty of action happens onstage, with Motezuma, and his wife Mitrena ultimately costumed most impressively in the Aztec manner, Mitrena wearing the great feathered crown, as well as Fernando and Asprano in elegant Spanish regalia. To add to the spectacle, much of the production was highly choreographed almost as a ballet!

Almost all of the solo arias were deliciously ornamented very much in the style of Georg Frideric Handel whose 1720 “Radimisto” was presented in Santa Fe last summer also using counter-tenors, which I reviewed on this website. Motezuma premiered 13 years later (1733). To put these works into operatic perspective, Mozart’s fabulous “Marriage of Figaro” came along 53 years later in 1786 – radically modern music at its time, but leaving no doubt about the legacy of these earlier Baroque operas. After another 140 years came Puccini’s glorious “Turandot”!!

This was quite an evening of opera showing extremely vivid imaginations at LBO, something for which they are deservedly well known – after all, their next venture is in the deep innards of the Queen Mary!

As always, none of us at Opera War Horses seek nor receive any goodies for our recommendations. Your Tipster has dined in all of these restaurants often and has stayed at the recommended hotels.