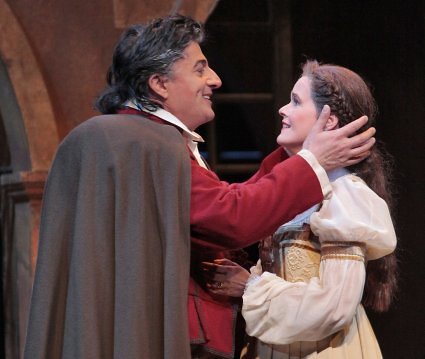 Verdi’s “Rigoletto”, like “Il Trovatore”, the opera that immediately followed it, has had popular approval from its very first performances.  With one of the most familiar arias in all of Italian opera, the lead tenor’s La donna e mobile, and a succession of familiar and infectious musical numbers, its position at the very core of the standard operatic repertory is almost never questioned.

Even so, there has been the perception that there presently is an insufficient number of opera singers with the great Verdian voices to schedule the opera with the frequency that all previous generations since its premiere in 1850 have expected.

This does not mean that there are not great Rigolettos performing. The most recent “Rigoletto” review on this website chronicled a San Francisco Opera production starring Paolo Gavanelli, who would rank high on any list of the great Italian interpreters of the role, either listing those of our present day or listing the memorable performers over the last several decades (See Gavanelli Dominates Strongly Cast S.F. “Rigoletto” – October 15, 2006).

Even so, the “large” Verdi dramatic baritone voice, has, for some time, seemed much rarer than previously.  For the “Middle Verdi” baritone roles – e.g., the title role in “Macbeth”, di Luna in “Trovatore”, Giorgio Germont in “Traviata” and Renato in “Ballo in Maschera” – one expects power from the bottom to the top of his range, yet the ability to produce and sustain a beautiful sound in the baritone range’s higher notes, where Verdi concentrated much of the music he wrote for these parts.

We have previously cited San Diego Opera as a company that has proven especially attentive to traditional Verdian values – casting appropriate to the demanding roles of the great Verdi operas, productions and costuming that one could imagine that Verdi (who was often quite explicit on what he expected the scenery and costumes to look like) would approve. San Diego is one city where one can be rather confident that one will not see Verdi’s ideas trashed. 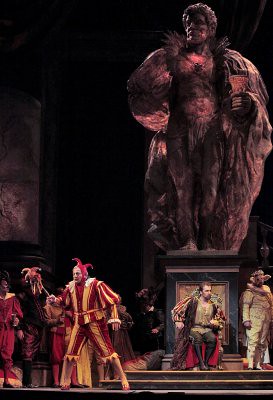 In San Diego Opera’s latest mounting of the venerable Verdi “Middle Period” masterpiece, Lado Ataneli, the baritone from the country of Georgia, assumed the title role. Those in the audience clearly were aware that they were in the presence of a major Verdian power baritone.

Nor was it merely the lead role where “power casting” was evident. The Gilda was Slovakian soprano, L’ubica Vargicova, who had dazzled Los Angeles Opera audiences two months previously in a stunningly beautiful Queen of the Night in Mozart’s “Magic Flute”.  And that most impressive of major Verdi comprimario roles, Sparafucile, the assassin was thinks of himself as a man of principle, was also in the hands of a major Verdi voice, Armenian basso Arutjun Kotchinian.

(As is usually the case at the company, the smaller roles were in competent hands, but one notes the luxury of having Malcolm MacKenzie, who now must be regarded as a principal singer, return to reprise the interesting role of Marullo, that he sang here seven years earlier in his career).

[Rigoletto (Lado Ataneli) in an affectionate moment with his daughter, Gilda (L’Ubica Vargicova); edited image, based on a Ken Howard photograph, courtesy of San Diego Opera.] 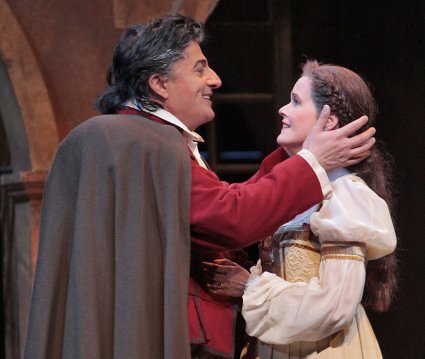 The other lead role, that of the Duke of Mantua, was originally designated for Roberto Aronica. When Aronica, quite late in the planning for the production, withdrew from this (and other assignments at other houses), Giuseppe Gipali was enlisted in his place.

This website has been unkind to Gipali, who possesses a stylish leggiero voice that seems right for the Donizetti tenor roles.  Unlike the other three principals, his should not be considered a power voice, in this website’s sense that it projects well in a large American opera house. His Mantua seems a better fit for smaller opera houses, such as one encounters in Europe, rather than for such giant American performing arts centers as San Francisco’s War Memorial Opera House.

In his 2006 appearance at San Francisco Opera, with its open orchestra pit and cavernous interior, his voice was swamped by the power team of Gavanelli, Mary Dunleavy (Gilda) and Kristinn Sigmundsson (Sparafucile). In my opinion, he was outshone also by the power voices of Ataneli, Vargicova and Kotchinian in San Diego. The San Diego Civic Theatre has a covered orchestra pit, which is kinder to the smaller voice, and the theatre is smaller than the War Memorial, although not by that much.

Gipali‘s voice shone brightest in the second act, with a nicely sung Parmi veder le lagrime. I was pleased that Possente amor mi chiama, the Duke’s cabaletta that follows that aria, was not cut, as so often happened in the 19th and 20th centuries.

Gipali’s third act La donna e mobile drew applause, and the balance of the voices in the famous quartet (with Kristin Chavez as Maddalena, joining Ataneli, Vargicova and Gipali) under conductor Edoardo Mueller passed muster, as I do not think it did in San Francisco with Gipali teamed with a different trio of colleagues.

[Below: the Duke (Giuseppe Gipali), masquerading as a poor student, expresses his love for Gilda (L’Ubica Vargicova); edited image, based on a Ken Howard photograph, courtesy of San Diego Opera.] 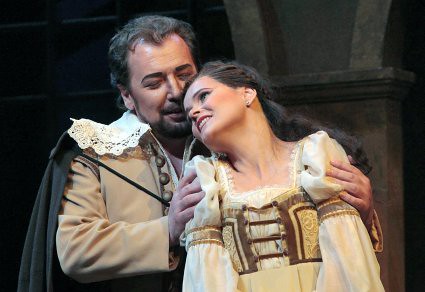 That said, San Diego Opera has mounted a cast that ranks high not only with the voices that are currently singing, but also when one considers the casts that might be assembled at various times and places during the last half century. Surely, longtime opera-goers will recall Verdian casts, with power singers of the first rank in every role. (One of the memorable nights during San Francisco Opera’s 1975 mounting of “Il Trovatore” had Joan Sutherland cast as Leonora, Shirley Verrett as Azucena, Luciano Pavarotti as Manrico and Ingvar Wixell as the Count di Luna, with Verrett stepping in at the last minute for an indisposed colleague!)

But more often than not, in major companies throughout the world, it is not that often that one can say that every one of the principals is a power singer of the first rank. Those seeing the San Diego Opera “Rigoletto” are experiencing a cast that is above the historic norm for casting this opera.

In another sign that San Diego Opera is circling the wagons in defense of the proper performance of Verdian opera, it obtained the New York City Opera’s Carl Toms production. Toms, who died a decade ago, first made his mark in designing the sets for the Bard’s performances in British theaters.

[Carl Toms’ Act II set for the area adjacent to the Duke’s apartments, where Rigoletto (Lado Ataneli) sings the aria “Cortigiani” to the courtiers who kidnapped his daughter; edited image, based on a Ken Howard photograph, courtesy of San Diego Opera.]

Much of Toms’ early work in opera production was in California in the 1970s, where he designed the San Francisco Opera productions of Britten’s “Peter Grimes” (1973) and Massenet’s “Thais” (1976) and several productions for San Diego Opera including the memorable productions of Bellini’s “Norma” for Beverly Sills and Thomas’ “Hamlet” for Sherrill Milnes. 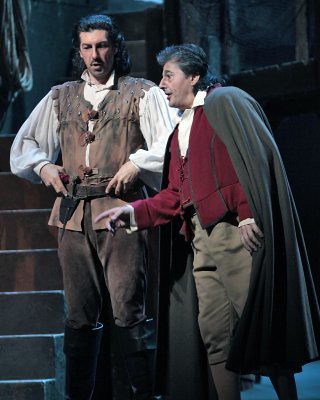 When San Diego Opera decided to schedule “Rigoletto” for 2009, it arranged to rent Toms’ 1988 production from the New York City Opera. This was the company from which San Diego Opera rented the sets for Donizetti’s “Maria Stuarda” for its previous season. Both productions were associated with the company’s “Beverly Sills era”.

There is a story there also. At the time of those rentals, Gerard Mortier, the outgoing director of the Opera National de Paris, noted for his extremely avant-garde productions in the French capital city, had signed on to be general director of the New York City Opera.

As the financial plight of that company and the subscriber pushback against unusual productions of standard repertory operas (that has been seen in many of parts of the United States and elsewhere in the world) began to surface in New York, Mortier and NYCO parted company.

But before he did, Mortier informed the San Diego Opera company that he had no intention of reviving either of the opera productions that they had rented from City Opera, and that San Diego Opera was welcome to consider their contracted rental fees as the purchase prices for the two productions. So, an opera company that could be considered as “Verdi-friendly” as any in the world, was able to obtain Toms’ traditional “Rigoletto” production for a song.

When the production first appeared in the Big Apple, a couple of the New York City critics carped at the giant statue of the Duke of Mantua that towers over the first Act. (When the production was first revived in New York, the stubby-legged statue was removed from the scene.) For San Diego, Toms’ original concept was on display.

But I, for one, “got” Toms’ swipe at the outsized pretensions of the Italian Renaissance dukes (who, after all, sponsored and paid for some of the great works of art we treasure still) and found the first act setting wholly appropriate to the story line. In fact, each of the scenes that Toms developed for every one of the four scenes (including two for the first act) is beautifully conceived – even the last act’s seedy neighborhood on Mantua’s Mincio River.

Fortunately, the Toms sets are exportable to many of the smaller opera houses in the United States. Since the greater part of Carl Toms’ scenic designs for opera apparently have been destroyed, San Diego Opera is again preserving a part of the world’s artistic heritage when many other companies simply discard sets of a production they do not plan to revive.

Two other veterans of “proper” Verdi, Conductor Edoardo Mueller and Stage Director Lotfi Mansouri contributed to the evening’s success. The elegant costumes, including masquerade dress for the first scene, were designed by Toms. The choreographer was Keturah Stickann and Timothy Todd Simmons was the Chorus Master.

When Vargicova made her curtain call bow, much of the audience stood to cheer. She was followed by the solo bow of Ataneli, who was the recipient of a vociferous and sustained standing ovation. It was a truly successful evening for the San Diego Opera.

There are many reasons to travel to San Diego during any part of the year, but those who can get there in late winter and early spring will find its opera company’s performances to be a special treat.

Most notably, it is one of the places in the world where one can be sure of seeing Verdi operas performed in respectful productions of which the Italian maestro would surely have approved. The San Diego Opera “Rigoletto” – a power hit with a mostly “power” cast – is highly recommended.