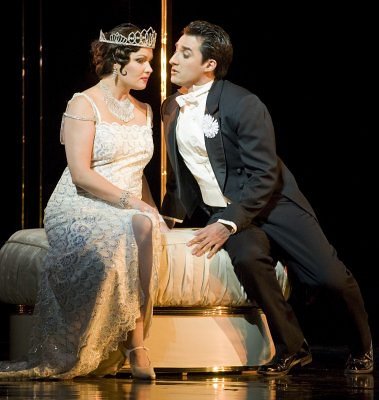 With this posting, we cite upcoming performances of the three towering masterpieces of Giuseppe Verdi’s “Middle Period” – “Rigoletto”, “Il Trovatore” and “La Traviata”. Each will be seen at one or more of four Southwestern opera companies whose productions we regularly review – San Francisco Opera, Los Angeles Opera, San Diego Opera and Santa Fe Opera.

Georgian baritone Lado Ataneli, star of San Diego Opera’s 2005 production of Verdi’s “Simon Boccanegra” and Los Angeles Opera’s “Don Carlos” returns to Southern California for five performances as Rigoletto, perhaps the most challenging of all of the Verdi baritone roles. 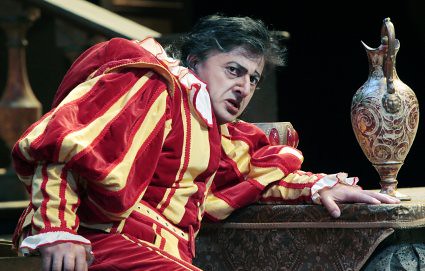 Joining him as his daughter Gilda will be Slovak soprano L’Ubica Vargicova, who was a triumphant Queen of the Night in January 2009 for Los Angeles Opera’s production of Mozart’s “Magic Flute”.

The tenor, Albanian Giuseppe Gipali, reprises the role of the Duke of Mantua that he sang in 2006 at San Francisco Opera. Edoardo Mueller conducts and Lotfi Mansouri is the stage director. The sets were designed by Carl Toms.

“Traviata” has been out of the repertory of each of the Big Four Southwestern opera companies for a couple of years, but returns to three of them in mid-year (and the fourth in early 2010). 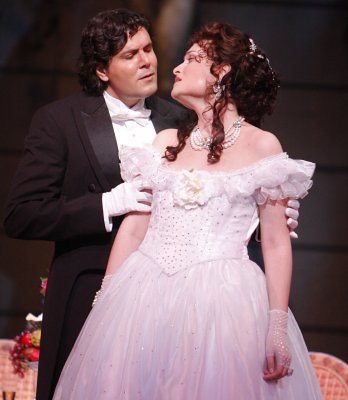 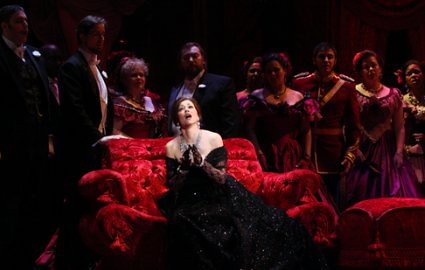 Grant Gershon, Los Angeles Opera’s chorus master, makes his L. A. Opera conducting debut. Marta Domingo, the previous stage director in L. A. for both her production and Agostinucci’s, directs.

Marta Domingo’s 2006 flapper era production travels from Los Angeles Opera to San Francisco as a vehicle for Anna Netrebko, the Russian soprano whose early career, like several other superstars of past and present, included important seasons at the venerable War Memorial Opera House.

Like the “Traviatas” in Los Angeles, San Francisco Opera has two main casts, although there are three Violettas in S. F. For the five sold out Netrebko performances, her colleagues are Charles Castronovo (Alfredo) and Dwayne Croft (Giorgio Germont). These Germonts are joined by Allyn Perez for the June 1st performance.

[Below: Anna Netrebko is Violetta and Charles Castronovo is Alfredo in Marta Domingo production of “Traviata”. Netrebko and Castronovo team for five of the San Francisco performances; edited image based on a Terrence McCarthy photograph, courtesy of  San Francisco Opera.] 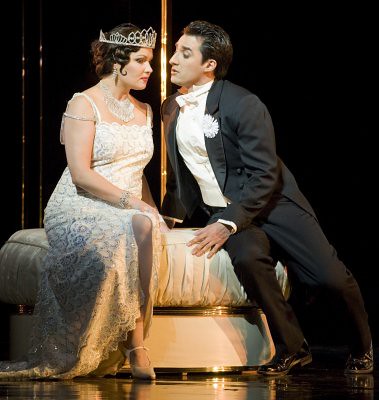 Meanwhile another Jazz Era trio of principals (Elizabeth Futral, Joseph Calleja and Stephen Powell)  show up for the June 29  and July 2 and 5 performances.

Donald Runnicles, in his last performances in his role as musical director and principal conductor of the San Francisco Opera, chooses Verdi for the era’s end. Marta Domingo, who has been ubiquitous in Los Angeles Opera “Traviata” production stagings for a decade, adds San Francisco to her area of influence.

Laurent Pelly’s new production of “Traviata” stars Natalie Dessay as Violetta and her husband Laurent Naouri as Giorgio Germont. For the final three performances in August, Naouri is replaced with Anthony Michaels-Moore. 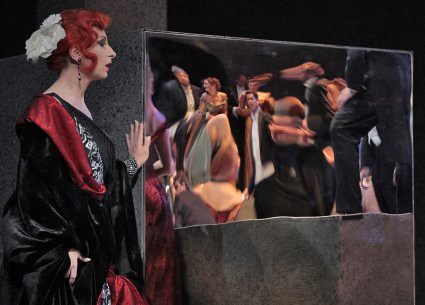 The stars are aligned for a propitious opening production for the Luisotti era, with seven artists whom this website admires all collabarating on bringing the Chicago Lyric Opera’s 2006 production to San Francisco.

First, the Scottish production designer and stage director, David McVicar, is one of the most brilliant of contemporary designer-directors, whose productions of Mozart’s “Don Giovanni” at San Francisco Opera and Massenet’s “Manon” at Lyric Opera we praised  highly. Second, one has full confidence when Luisotti is in the pit, especially so when the opera he is conducting originated in his native Italy.

[Below: McVicar’s staging of the “Anvil Chorus” , edited image, based on a Metropolitan Opera photograph.]

But for those opera-goers who want to know who is singing, rather than just who is designing the sets, stage directing and conducting, every member of the cast has received high marks on these pages.

The Count di Luna, Dmitri Hvorostovsky, is such a San Francisco Opera favorite, that he would alone sell out every performance. Marco Berti, in the title role, who, so far, has only been seen as Don Jose in Bizet’s “Carmen”, is a worthy Verdian tenor at a time when some people have grumbled that no artist exists in that category anymore.

Three voices are new to San Francisco, but not to enthustiastic reviews here. Sondra Radvanovsky is scheduled as Leonora, Stephanie Blythe is to be the Azucena and Burak Bilgili is the Ferrando.

My reviews of Hvorostovsky and Berti in Houston Grand Opera’s production of Verdi’s “Simon Boccanegra”, of Hvorostovsky in San Francisco Opera’s mounting of the same production, of Radvanovsky in Puccini’s “Suor Angelica” at Los Angeles Opera and in Donizetti’s “Lucrezia Borgia” for Washington National Opera, of Blythe in Saint-Saens’ “Samson et Dalila” at Pittsburgh Opera, and of Bilgili in Delibes’ “Lakme” are easily accessible on this website.

Do NOT pass up an opportunity to see this all-star combination!