As if an opera lover needed yet another legitimate excuse to repair to America’s lush, green Riviera Coast in Santa Barbara, Opera Santa Barbara unveiled its 2009 Opera Festival Season at their new venue in the grandly restored old Granada Theatre replacing their former (but very intimate) Lobero Theatre location not far away. 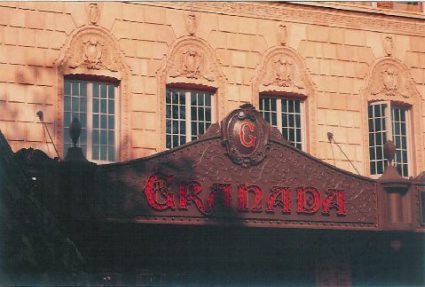 Parking nearby is no problem, but your best bet is in back of the Granada which is at 1214 State Street (805.899.2222, Santa Barbara 93101 for your Mapquest.com search). Just go around the block to one-way-towards-the-ocean Anacapa St and you’ll see the plainly marked entrance with its own entry lane on the right, or you can get in also on Anapamu St mid-block on the mountain side of the street – we picture this parking structure as it is indeed an architectural delight!

[Below: the Granada Theater’s parking structure; photograph by Tom.] 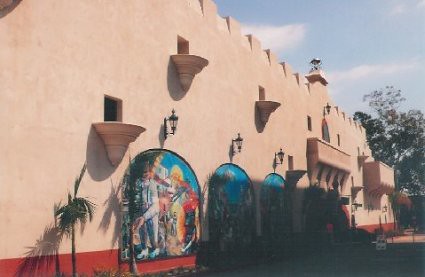 The Granada has excellent bars with all the amenities including Santa Barbara County’s now world-class wines. We show the State Street entrance to the new venue (see photograph above) so you don’t have to keep looking!

Embraced by gorgeous mountains to the North and East, the majestic reaches of the Pacific to the West and South with Pacific islands shimmering on the horizon, wafted by warm ocean breezes in an idyllic Mediterranean ambience, Santa Barbara offers an unsurpassed environment to enjoy affordable (think starting at 20 bucks!!) and superb opera in a setting unmatched anywhere in America – it’s not like Chicago on an icy, windswept winter’s night leaving the operahouse grasping your program as your fingers – and nose – freeze!! But oh, do they have opera!  (See your website host’s recent reviews of Chicago Lyric Opera’s gems this season.)

This year’s Santa Barbara Opera Festival offered an abundant array of events as seen in OSB’s mailer we picture here, suggesting what next year will have on tap. Hint: start planning now – you won’t find a more engaging site for a wonderful weekend of superb opera and dining which won’t put you in the poorhouse!!

[Below: handbill for the OSB’s 2009 Festival, courtesy of Opera Santa Barbara.  ] 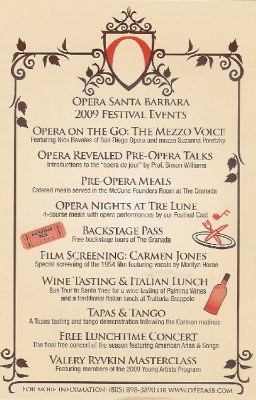 The dining scene remains excellent, which we previously detailed in Tom’s Tips for seeing opera in Santa Barbara, wherein accomodations are recommended. Tragically, nearly everywhere restaurants, concerts, shops, etc. are disappearing in these very hard times as opera companies everywhere are under extreme financial stress with the recent, tragic loss of Orange County’s Opera Pacific in which your website host and I reviewed many productions – among many other losses.

Virtually every opera company, including the grand Met itself, is reducing, trimming, pruning, lessening, etc. their offerings as donor-funds dry up, making all the more imperative for those of us who love this most wonderful BUT most expensive art-form to do all we can to help.

Our top-recommended restaurant near the opera – often frequented by the late super-chef Julia Child, Santa Barbara’s myriad Hollywood celebrities and most of the opera casts – is now gone (Wine Cask and Intermezzo) which we replace with a wonderful Santa Barbara wine country restaurant, literally around the corner from the Granada – Bouchon at 9 West Victoria St, 805.730.1160 (Book well in advance. It’s extremely popular and has limited seating).

There are some additional – and excellent options in easy walking distance once you’re parked. Across the street a block away is Opal, 1325 State St (805.966.9676). It’s very elegant and tres chic. Bring money!

Lehar’s  “The Merry Widow” (entertainingly “Die Lustige Witwe” in German, and no, it doesn’t mean the Lusty Wit Dies) is one of the most popular light-opera numbers of all time, certainly on the scale of the highly comparable Johann Strauss’ “Die Fledermaus”, both in my top 10 list.

This production is especially lush having been originally designed by San Francisco Opera in 2001, directed by SFO’s then-General Director Lotfi Mansouri with terrific-period costumes by the estimable Thierry Bosquet pooling their resources for a fabulously rich show. I saw it there (and elsewhere too) many times and loved it every time. 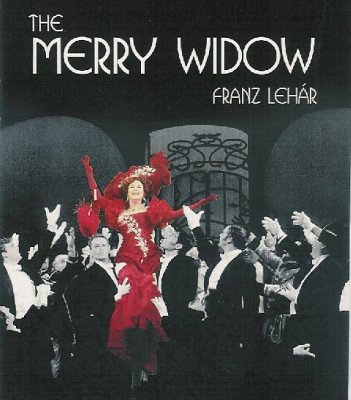 This lavish production – with the original art nouveau sets and costumes, is available on a DVD put out by Opus Arte # OA 0837D in 2002 which we highly recommend.

Stealing the show as Baron Mirko Zeta was comic-master Steve Grabe, whose wife Valencienne was most ably performed by Ani Maldjian who has graced the stage at Seattle Opera and Long Beach Opera, among others.

Bizet’s “Carmen”, now THE most popular and frequently performed opera of all in America, was a flop in its March 1875 premier 134  years ago at the Opera Comique of Paris (I saw it there!) in which spoken dialogue was used – the audience was not prepared for the lead female star as a loose-woman puffing on cigarettes, and some of the critics sniffed the piece was “too Wagnerian”, so back to the drawing board went 37-year-old Bizet, fixing it up, and as they say, the rest is history as Carmen conquered the world of opera.

Indeed, Carmen came back to Paris in 1883 in triumph – but, tragically, Bizet died before he could see this (many thought the premier’s flop was contributary), just three months after Carmen premiered in Paris’ Opera Comique – which has presented this trail-blazing, monumental piece more than 3200 times since!! Not bad for the box office, as indeed for every opera house in the world. How do you pay the rent but for Carmen, Butterfly, Boheme, Tosca, Marriage of Figaro, etc. ??? In these tough times, one need not be especially clairvoyant to suggest very, very few opera companies are going to take the risk of presenting something other than the regular repertoire Opera War Horses (hope you liked our plug!!).

OSB’s production featured the original spoken dialogue in French – a version rarely seen, but you would hardly recognize the difference in this lavish, colorful, fast-moving production with spectacular Flamenco dancers hugely augmenting the wonderful ambience of this world-class OSB production (love Flamenco as do I? Come to Santa Barbara’s Flamenco Arts Festival in September (www.flamencoarts.org), featuring utterly top performers from Spain and the US as well – all in unmatched surroundings unless you happen to be in Barcelona.

Like every opera-goer, I’ve seen this piece countless times in every variation conceivable. The story and characters afford the producers and designers, and especially artists, enormous leeway to interpret as they will.

As with the Merry Widow, MAW alums provided central casting with Emily Langford Johnson as a totally convincing, bare-foot seductress-first-class in the title role, Michael Hayes as her Don Jose having sung with New York City Opera, Portland, Cleveland, Ft Worth and Virginia Opera Companies.

Derrick Parker doing the juiciest role of the Toreador Escamillo (gets to fling the red cape, swish the swords and sing Toreador en garde . . . ) having performed with Houston Grand Opera (often reviewed by your website host, William), as well as at the Portland, Cleveland, Utah and Virginia Operas. Getting the heart-melting role of Micaela was Rena Harms coming from LA’s new Placido Domingo (LA’s General Director among other talents!) – Thornton Young Artists Program – having performed with LA Opera including in their Merry Widow (small world .  .   .  )

[Below: The Grisettes from Lehar’s “The Merry Widow”, edited image, based on a photograph from Opus Arte DVD of San Francisco Opera production.]

Some of the dialogue in Merry Widow is too good to resist: As you remember, everyone retreats to Paris’ ultimate evening entertainment venue Maxim’s (it’s still there, and it’s still sensational – including all those Can-can Grisettes [as so often seen in Santa Barbara?] ). To their erstwhile “married” male patrons, they sing:

When the nights are turning cold, And you want a girl to hold,

We’re delighted to receive you, And relieve you of your gold.

We won’t cheat you or mistreat you, We won’t complicate your life,

We know better than to greet you, When we meet you with your wife.

Those lines are worthy of Mozart at his most mischievous – well portrayed in the wonderful film Amadeus.

The orchestra, having available now a much larger house, is the largest OSB has ever had, and was under the baton of Santa Barbara Symphony’s conductor Nir Kabaretti who conducted with an excitement and dynamism not often seen these days,  with the production being directed by Vernon Hartman who did last year’s OSB smashing scream production of Donizetti’s “L’Elisir d’Amore”, which I reviewed on this website along with their fabulous “Cav-Pag”, part of OSB’s Italian Passions Opera Festival for 2008!

Great operettas like The Merry Widow rank among the world’s operatic masterpeices and deserve that respect, which unfortunately many have yet to receive. I comment, as the “New Kobbe’s Complete Opera Book” (1975 Ed), Simon & Schuster’s “Book of the Opera” (1978 Ed) and others omit The Merry Widow!!

One could be forgiven for thinking that some music critics are unwilling to recognize this rich genre of music as true opera (unlike, perhaps,Weinberger’s “Schwanda die Dudelsackpfeiffer” (Schwanda the Bagpiper), for fear us mediocre, riff-raff might remain unesoteric without their erudite operatic wisdom – pretending The Merry Widow doesn’t exist – let alone doesn’t belong – along side the other operatic masterpieces??

This September OSB will be presenting the World Premier of an opera newly commissioned by OSB written by Steven Schwartz, who is wide-world known for his Wicked and Pippin seen everywhere. This Opera is Se’ance on a Wet Afternoon.  (For more information see www.seancetheopera.com.)  OSB tickets are at www.operasb.com or 805.898.3890.

In its elegant, European-flavored new venue in the Granada Theatre providing a much larger, higher and deeper stage – and allowing for a full-scale opera orchestra – OSB is now ready for arrival on the world operatic scene – as they most certainly did with this Merry Widow and Carmen (seen March 14 and 15, 2009), and now on the cusp of commissioning and hosting a world-premier new opera. All we can say with deep and sincere appreciation is Welcome to the Big League! Take notice LA Opera, San Diego Opera, Santa Fe Opera, etc: there’s a feisty, bright, very-ready new kid in the block!!!