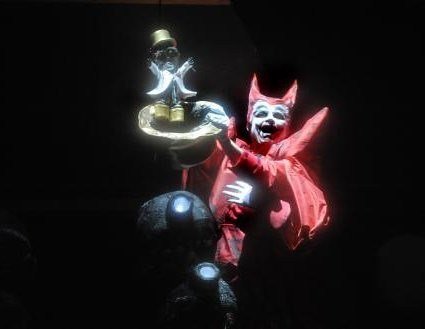 The work of German artist Achim Freyer has been seen twice before at Los Angeles Opera, including a new production of Berlioz’ “Damnation of Faust” in 2003, which Los Angeles Opera co-sponsored with the Warsaw Opera.

Influenced by surrealist artists and by ideas from the theater and opera of Japan and China, a Freyer production encompasses several signature elements. The opera’s characters will appear non-human but anthropomorphic, often having large heads or limbs. Key characters (such as Erda and Loge in this Ring) have multiple pairs of arms.

Imaginative lighting, encompassing horizontal or vertical bars of light, and grotesque and humorous imagery are Freyer trademarks. Shorter light bars, reminding one of the light sabers of George Lucas’ Star Wars films, will appear at key moments, as when Wotan contemplates the creation of the sword Nothung, which, intact or in pieces, is such an important plot motive in the next two operas of the Ring.

Symbols will often be associated with a particular character and may float in the air above them, sometimes descending into the stage action. A character may sometimes have an outer shell (I think of them as carapaces) and each character’s carapace has a unique look.

The singer playing the character or, alternatively, a being that I think of as an avatar  (someone costumed to represent that singer) can leave their carapace to take part in activities in another part of the stage, whenever circumstances (i.e., Freyer’s concept of how a part of the story should be played) require it.

Perhaps most strking of all is the use of the Freyer Ensemble – in “Rheingold” a dozen Los Angeles-based actors, dancers and stuntpeople dressed in black, who are engaged in the action of the opera in numerous ways. (The Ensemble will expand to as many as 18 performers in later Ring operas.)

Freyer is attracted to operas that have fantastic elements, so his association with Weber’s “Der Freischuetz” and particularly with Mozart’s “Magic Flute” and Berlioz’ “Damnation of Faust” permit his expansive imagination to obliterate traditional approaches to staging these operas.

Currently, California’s two largest opera companies are each engaged (and perhaps at times consider themselves entangled) in major projects bringing forth new productions of the four operas of Wagner’s “Der Ring des Nibelungen”. Whereas the San Francisco effort, for all its anachronistic trappings, is an intensely realistic human portrayal of the events of the tetralogy, the Freyer “Rheingold” is not a world that human inhabitants of our Earth would find familiar.

James Conlon conducts the Los Angeles Opera Orchestra out of audience view in a covered pit. As the curtains open, one sees bright blue lights at the top and bottom of the scrim, then horizontal bands of light descend. The Rhine Maidens all swim at the same level of the water. Throughout the act, each Rhine Maiden has a reflection who, of course, provides a mirror image of her actions.

Alberich first appears in his carapace, which is soon whisked away. He tries to entice each of the Rhine Maidens to enter a liaison with him. Each time he propositions a Rhine Maiden he produces a red bauble (representing his lust) that looks like a Christmas tree ball. Magically, it disappears from his hand and then pops up in that maiden’s hand, each time to have his hopes crushed and the ball back into his hand.

Hawkins, who appeared in late Fall as Porgy at Lyric Opera (See: The Zambello “Porgy and Bess” An Historic Success at Chicago’s Lyric – November 18, 2008 ) was an impressive Alberich. The Rhine Maidens were a vocally strong trio. 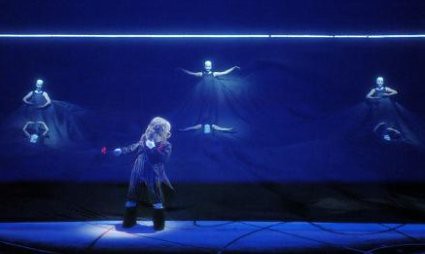 Alberich, in his frustration, turns his attention from his prey and discovers the Rhine Gold. Freyer introduces the gold through the movements of low wattage white headlamps worn by members of the black-clad Ensemble.

Alberich learns the gold’s secrets from the indiscreet Maidens. His Renunciation of Love creates chaotic movements beneath the black cloth that represent swirling water. Wagner, in his first musical transition, transports us to the realm of the gods.

The god world is a tilted disc. At the disc’s periphery is the carapace that Wotan (Vitalij Kowaljow) inhabits, to the audience’s front left and that of Fricka (Michelle DeYoung), to the audience’s front right. Both Kowaljow and DeYoung split their time between nestling in their own carapaces and either traveling in person or sending their lookalike avatar to interact with their spouse or with another god.

Besides their carapace, each god has a personal symbol that I call an attribute (using as an analogy the items associated with the statue of a given saint in the carvings of European cathedrals). The attributes may be obvious (Donner’s pair of cymbals and Freia’s tray of Golden Apples) or quite obscure (Froh’s ocarina and Fricka’s glowing hands).

[Below: Fricka (Michelle DeYoung) has stepped out of her carapace and shows her glowing hands; edited image, based on a Monica Rittershaus photograph, courtesy of Los Angeles Opera.] 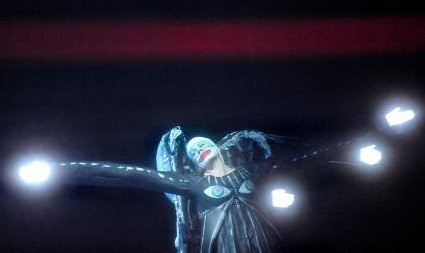 Moving clockwise from Wotan one finds Froh (Beau Gibson), who plays his ocarina and whose vintage airplane rests in the air above his head. Moving further clockwise (just past 1 p.m., were it a clock dial) is Donner (Wayne Tigges). A human-looking being hovers above the god of thunder’s head.

The Freia (Ellie Dehn) spent the least time in her carapace, whose front prominently displayed the golden apples that she tended. Often she would be seen at the 6 p.m. portion of the disc, closest to the audience, her carapace lying on the floor, with her above it.

This website has argued that Wagner should always be sung beautifully, and, in most instances, this goal was achieved. Kowaljow as Wotan scored another vocal triumph, and continues to confirm this website’s opinion that he is one of the finest of basso cantantes currently performing. DeYoung’s Los Angeles Opera debut as Fricka made a strong impression vocally.

Tigges and Dehn have relatively little to sing, but large voices are needed when they are the center of the stage action. Both met the vocal demands of their roles.

I have become a fan of Beau Gibson, ever since I heard him sing the title role of Gounod’s “Faust” on short notice at Houston Grand Opera, when William Burden became indisposed (See  A “Faust” Surprise in Houston – January 23, 2007 ). However, I am convinced that, at this point in his career, he should stay with the leggiero roles (I am mindful that there may be more fine tenors available in this category than there are performances to use their talents), rather than trying to pursue Wagner. Froh sings even less than Donner, but when he does it is clear that this role is an early stop on the road to heldentenor and needs a voice on that career path.

The giants Fafner (Eric Halfvarson) and Fasolt (Morris Robinson) were dressed in coal black work uniforms. A model representing Valhalla hovers over them, and a smaller image of that model sometimes approaches Wotan’s carapace. Robinson, whom I had liked earlier in the year as Sarastro in L. A. Opera’s production of Mozart’s “Magic Flute” was a vocally secure and impressive Fasolt. Unfortunately, Halfvarson, who seems no longer able to sing legato passages without succumbing to a wide, uncontrolled vibrato again disappointed me.

[Below: the realm of the gods, over which hovers Froh’s airplane, the giant’s model of Valhalla, and, above Donner, the image of a bound male; edited image, based on a photograph from Los Angeles Opera.] 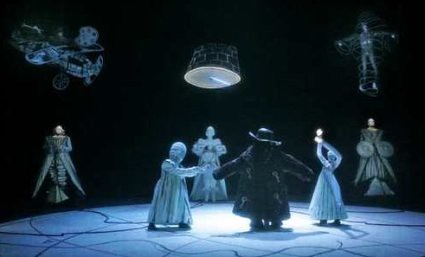 Even with great performances from Kowaljow, DeYoung and Hawkins, the evening belonged to the debuting Dutch tenor Arnold Bezuyen, who, dressed in a flaming red costume, was the dominant presence vocally and, in this production, histrionically. Freyer unleashed him to play up the comic potential that exists in the role.

When Loge convinces the gods that there is a way out of Wotan’s ill-conceived bargain with the Giants to build Valhalla, the long ropes (a motive that recurs in other Freyer productions) that bound Alberich now become part of the spell the gods use to move Wotan and Loge into the Nibelheim. Then half of the god’s disc is raised as if on a hinge to reveal to the audience the Nibelheim below. 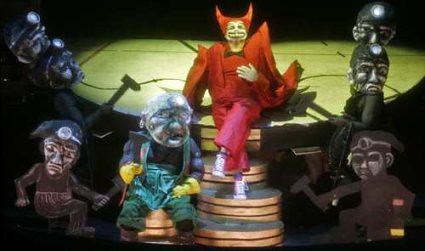 The descent into the Nibelheim to “steal the gold from a thief” as Loge would put it, is one of the truly great Wagnerian orchestral passages with the clinging anvils of the Nibelung dwarf-slaves. Even though the first two scenes give opportunities for imaginative stage direction, the Nibelheim scene is the first episode in the Ring that absolutely requires magical transformations before the audience’s eyes.

Therefore, I was very interested to see what form the Tarnhelm would take, and how its magic effects would be displayed. Freyer’s Tarnhelm  is a golden top hat. When Alberich is persuaded by the sly Loge to turn himself into a giant serpent, Alberich, attached to guy wires and wearing his top hat, is lifted high up from the stage floor and his body is lengthened the entire height into the form of an infinitely elongated snake. But when Alberich is tricked into transforming himself into a tiny toad, it is his tiny avatar, wearing a pint-sized Tarnhelm that Loge captures.

[Below: Loge, God of Fire (Arnold Bezuyen), captures Alberich, who wears the Tarnhelm, with which he transformed himself into a toad; edited image, based on a photograph, courtesy of Los Angeles Opera.] 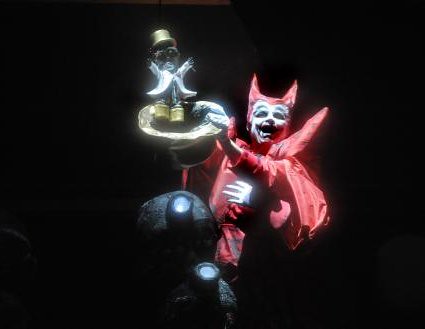 After Loge and Wotan return from the Nibelheim with Alberich and the Rhine Gold, Alberich, still in possession of the Ring, commands his slaves to stack the large gold circles into which the Rhine Gold has been transformed.

[Below: The captured Alberich (Gordon Hawkins) holds the Ring aloft as the Nibelung slaves stack the Rhine Gold at the rear of the disc; edited image, based on a Monika Rittershaus photograph, courtesy of Los Angeles Opera.] 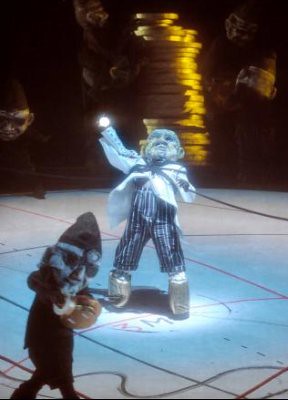 [Below: Wotan (Vitalij Kowaljow, left) and Loge (Arnold Bezuyen) consider releasing Alberich (Gordon Hawkins) since they have taken possession of the Rhine Gold as his ransom; edited image, based on a photograph, courtesy of Los Angeles Opera.] 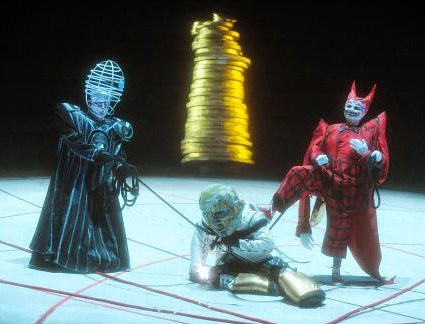 When Alberich is released, using his newly won freedom to impart his curse on the Ring, we become aware that Freyer has an inventory of symbols to associate with the curse. One is to be a large black hand that appears on the rim of the disc.

But Wotan has the Ring and the curse is not yet taken seriously. The business of substituting the Rhine Gold for Freia as the alternative payment for the giant’s contract is what, at this time, principally concerns the gods. In one of the most imaginative Freyer conceptualizations, when Freia has to stand in front of a stack of gold, Fafner and Fasolt inspect the situation behind giant magnifying glasses. 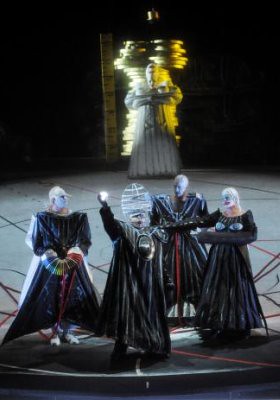 Three events lead to “Rheingold’s” denouement. First, even though the giants have forced Wotan to add the Tarnhelm to their cache, Fasolt demands that the cursed Ring on Wotan’s finger be added to their stash to complete the payment.

Next Erda (with six arms in the Freyer production, and played by Jill Grove), convinces Wotan to yield the Ring. Then, once the Ring is in the giants’ hands, Fafner enters into a death struggle with Fasolt. Resenting the fact that Fasolt’s amorous feelings for Freia has diverted the brother giants from their strategic objectives, Fafner kills him (in this production two of the Ensemble members in black acting out their battle and Fasolt’s death). The big hand returns with the curse, and the Rhine becomes blood red.

The Freyer production, it seems to me, assumes a rather thorough understanding of the story of the Ring, and may appear needlessly confusing to persons who are seeing any part of the Ring for the first time. However, I found the “Rheingold” to be a fascinating experience, and look forward to the presentation of the three other Ring operas of this production, and to Los Angeles Opera’s performances of complete Rings in 2010.