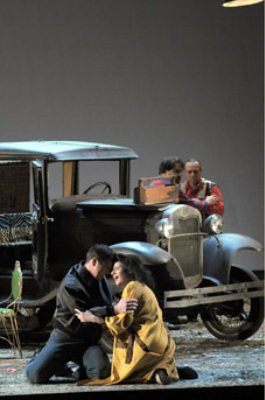 Collaborations on new opera productions between set and costume designer Michael Yeargan and production designer Elijah Moshinsky can result in insightful experiences and are certain to be absorbing. It has been seven years since they collaborated on a new production of Ruggero  Leoncavallo’s “I Pagliacci” for the Lyric Opera of Chicago. That production was revived earlier this season by Houston Grand Opera, on the traditional double bill with Mascagni’s “Cavalleria Rusticana”, and both productions subsequently returned to Chicago.

The Houston and Chicago “Pagliacci” casts shared two major artists, the Canio (Vladimir Galouzine) and the Nedda (Ana Maria Martinez). The other principals in the Chicago revival were Mark Delavan (Tonio), Christopher Feigum (Silvio) and Keith Jameson (Beppe). For the revivals in both cities, the stage directing assignment passed from Moshinsky to Leslie Halla Grayson. In Chicago, the conductor was the Italian Renato Columbo.

Yeargan explained that, even though the collaborators were quite prepared for the section of the evening devoted to “Cavalleria Rusticana” to have a mid-19th century orientation (See: Guang Yang a Stellar Santuzza in Lyric Opera’s “Cavalleria” – Chicago, February 25, 2009), they felt no concern about time-shifting the “Pagliacci” to Europe in the early postwar period. Yeargan said he was inspired by the look associated with the work of filmmaker Federico Fellini, whose list of movie creations included a kind of semi-documentary, entitled (in English) “The Clowns”.

Many of us have a list of production designers for whom any announcement of an opera time-shift, change of venue, or use of a cinematic idea as a production theme would raise deep concern. But Yeargan’s instincts in designing the opera’s visual settings, whether in tandem with Moshinsky or with another stage director, almost always lead to theatrically valid opera performances. And “Pagliacci”, even though centered on a vagabond subculture, has a plot that deals with common human passions that are familiar anywhere.

Soon we will go back in time with our commedia dell’arte troupe to a world derived, via Yeargan, from Fellini’s imagination. But before our  journey through time begins, we experience something that Leoncavallo intended us to do, but which has disappeared from many current productions of “Pagliacci”. The baritone who plays Tonio (in this production, the excellent Mark Delavan) steps in front of the drawn opera house red curtains to sing the opera’s prologue to the audience.

There Delavan was, in a beige raincoat, black slacks and striped shirt, singing the greatest of verismo baritone arias, assuring the audience that what is happening is simply a play. But we will soon see that there is a air of surreality in this prologue, reassuring a mostly English speaking audience in Italian, about what they are to witness.

(I have no doubt that many in the audience were looking around trying to find the supertitles, that were with them throughout “Cavalleria”. How did we get through whole seasons of opera performances without them in those years before Lotfi Mansouri popularized them in Toronto?)

When the curtains do open, supertitles do return, but it is a dark, gravelly urban open space with gray walls, one of which has three crook-necked lights collared with large white bells attached to the walls. Across to stage right is a fenced off area, covered with mesh metal, which will prove a convenient place for our James Dean-like Silvio (Christopher Feigum) to skulk in the darkness.

The main characters in the troupe of players (Canio, Tonio, Nedda and Beppe) do much of their traveling in a old jalopy truck – an idea shared with Jean-Pierre Ponnelle, who used the device 26 years before this production debuted in his 1976 production for Placido Domingo at the San Francisco Opera. Yeargan’s jalopy, as in the Ponnelle production, can be converted to the stage on which they will perform their play.

The truck arrives on stage as soon as the post-prologue opera has begun. But Yeargan shares Fellini’s love for clowns, and Canio’s troupe has been augmented by jugglers, acrobats, and performers on stilts and unicycles. 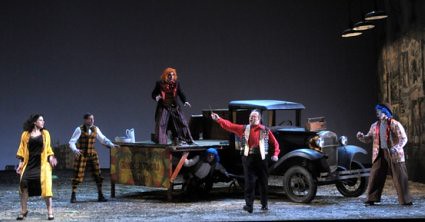 Canio, of course, became an iconic operatic character, familiar to the wider public  through the savvy promotion of the opera by Enrico Caruso, who made his aria Vesti la giubba one of the earliest  (some think it was the earliest)  records to sell a million copies.  I suspect much of the wider public assumes Canio’s actual name is “Pagliacci” and that – as a clown with a broken heart – he is a sympathetic character.

In fact, from a 21st century perspective, from the information we are given about him in the opera, whatever the backstory with Nedda in earlier times, he is now an abusive and dangerous husband, and sympathies are properly with Silvio and Nedda in trying to extricate her from a hopeless situation.

I had not heard Russian tenor Vladimir Galouzine in person before, and found his style of power singing, rarely dropping in volume below forte to be quite unlike the singing style of any Canio I had heard in the past.  I suppose it works. Since I think of Canio as a bad guy, I suppose it is dramatically valid to hear the part approached aggressively, rather than hearing a highly subtle vocal performance. (On the other hand, I can concede Iago in Verdi’s “Otello” or Scarpia in Puccini’s “Tosca” to be evil persons, and still enjoy the parts subtly sung.)

Delavan’s Tonio was the complete performance that is now the hallmark of the American baritone. Tonio walked with a cane, as the result of some leg injury, and Nedda used that cane as a weapon against him when Tonio tried to force unwanted attention upon her.

Martinez’ Nedda was beautifully sung.  The “bird song” with its trills and soaring cadenzas was a joy to hear. Feigum, playing  her lover, is a lighter baritone voice than I am used to as Silvio, but he was a handsome image in his leather jacket and t-shirt. Silvio, even though only the second baritone in the opera, shares some of the most melodious music in Italian opera and his voice blended nicely with Martinez’. The two of them brought  youthful passion to these roles. They kneel on the ground, as they plan their future.

[Below: Silvio (Christopher Feigum) and Nedda (Ana Maria Martinez) agree to escape together after that evening’s show, unaware of being overheard by Canio (Vladimir Galouzine) and Tonio (Mark Delavan); edited image, based on a Dan Rest photograph, courtesy of Lyric Opera of Chicago .] 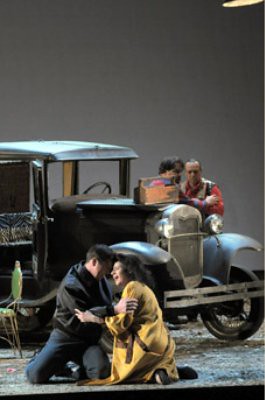 Consumed by love, Martinez’ Nedda then lies on the ground with Feigum’s Silvio on top of her in a (fully clothed) missionary style embrace . When Canio does come upon them, there’s much ambiguity as to what they are up to. Although Silvio escapes, clowns block Nedda’s exit and Tonio and the crowds restrain Canio. Galouzine’s Vesti la giubba seemed demonic, as Canio prepares for the show that evening.

[Below: Canio  (Vladimir Galouzine) is in despair, but is forced to put on greasepaint for the evening’s performance; edited image, based on a Felix Sanchez photograph, courtesy of the Houston Grand Opera .] 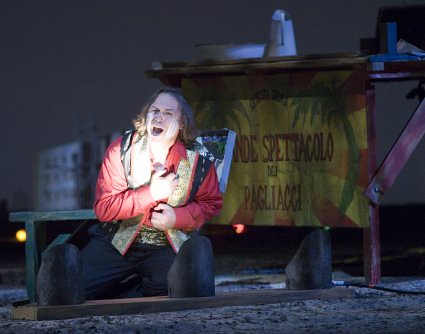 The Lyric red curtains then closed for the opera’s Intermezzo, which confused a few of the patrons who at the end of an act rush out in the dark to get into the lines for drinks or for the restrooms. When they heard the orchestra resume playing, they had to scurry in the dark back to their seats.

At this point the production’s clowns and jugglers take a lead role in the drama. All of the supporting cast of circus artists bring a rich element to the drama.

[Below: the town’s populace observes the clowns juggling fire torches; edited image, based on a Dan Rest photograph, courtesy of Lyric Opera of Chicago.]

They interact with the commedia dell’arte character of Colombina, played by Martinez’ Nedda in an iridescent blue wig, and with Jameson’s Beppe. Jameson added to his catalogue of character tenor roles with Beppe’s very prettily sung serenade, performed from atop a tall blue ladder near the steel mesh enclosure in which Silvio awaits his moment to act.

[Below: Nedda (in blue wig) is Colombina, surrounded by clowns; edited image, based on a Felix Sanchez photograph, courtesy of Houston Grand Opera.] 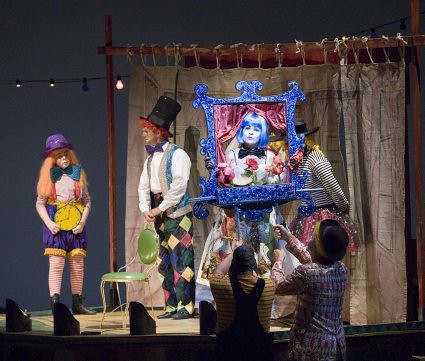 Leoncavallo had written the final lines of the opera (the Italian equivalent of “the comedy has ended”) for the baritone Tonio, but for decades tenors have taken it over. In this production, Delavan’s Tonio, who in the final scene is rather less manic than the murderous Canio, returns us to Leoncavallo’s intention.

[Below: Mark Delavan (Tonio) announces that “the comedy has ended”; edited image, based on a Dan Rest photograph, courtesy of Lyric Opera of Chicago.] 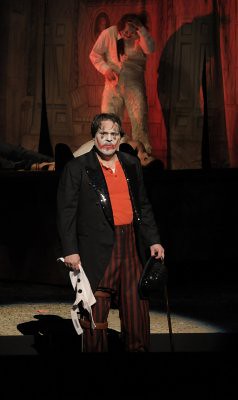 “I Pagliacci”is one of the Italian repertory’s valued treasures. Its simple story of attempted escape from sordid relationships is obviously one that is capable of mutliple ways of telling the tale. The transformation of this production to postwar Europe does this story no harm.  The sets and costumes, though stark,  were effective. The principals proved good actors in a well-rounded offering to Chicago audiences.

For a review of another recent performance of this opera, see: Cura, Futral Shine in New San Diego Opera “Pagliacci” – March 22, 2008