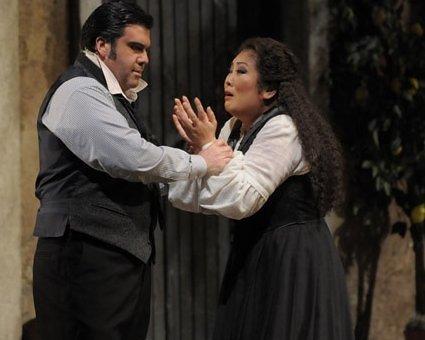 Lyric Opera has revived its 2002 productions for the “double bill” of Mascagni’s “Cavalleria Rusticana” and Leoncavallo’s “I Pagliacci”. This post reviews the “Cav”. The subsequent post will review the “Pag”. (Some of the photographs shown below are from the Chicago performances, and some are from the same production when it was shown in Houston last October.)

The tranquil prelude to the iconic verismo opera was conducted with obvious affection by Italian conductor Renato Palumbo. It is played before a scrim that shows a Sicilian cliff, with silhouettes of windswept trees, in the dark time just before dawn.

Dawn will arrive after Turridu’s prophetic offstage aria for Lola (sung, of course, in the Sicilian dialect) in which he swears that he will die for her (an event that also takes place offstage, just about an hour later).

The unit set, by Yale Professor Michael Yeargan, displays a small Sicilian town, dominated by three story structures of cream white and sepia tones. We can see several apartments with verandas throughout the part of the town.

[Below: Michael Yeargan’s unit set for “Cavalleria Rusticana”; edited image, based on a Dan Rest photograph, courtesy of Lyric Opera.] 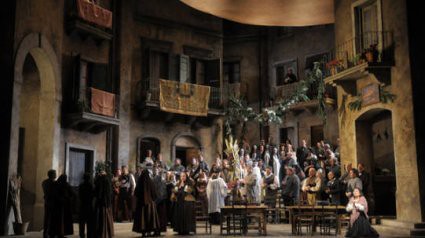 Elijah Moshinsky, who conceived the original production, was the original stage director. Leslie Halla Grayson directed its revival four months ago at Houston Grand Opera, and its current run at Lyric Opera.

The cinematic feel of the stage action that we witness, with its realistic depth and density, is intentional. Moshinsky and Yeargan conceived the town as a lively Sicilian community in the 1860s. Its population prepares for the Easter Sunday festivities, sweeping the streets, and performing other pasqual chores.

Farmers are returning with their implements from the field, soldiers wander about, then congregate at the tavern. Nuns herd school-children and organize them for their roles in processions and church services. The Sicilian alter boys don headgear like bishops’ mitres.

[Below: the villagers on Easter Sunday; edited image, based on a Felix Sanchez photograph, courtesy of Houston Grand Opera.] 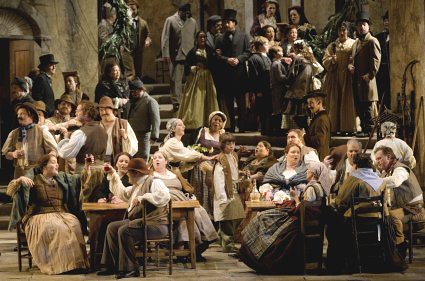 In this town, one of the many ways that Easter is observed is by hanging tapestries or fine cloths over the railings of one’s veranda and, at the beginning of the opera, much of the chorus is engaged in this and other pasqual celebrations. These include draping a floral banner, woven of Easter lilies and foliage, across the main path to the church.

The church is not visible, but we know it is on the lane behind Mamma Lucia’s tavern, because that is the direction that all the priests and parish functionaries and the Easter processions turn as they disappear from view.

[Below: an Easter Sunday procession into the village church; edited image, based on a Felix Sanchez photograph, courtesy of Houston Grand Opera.] 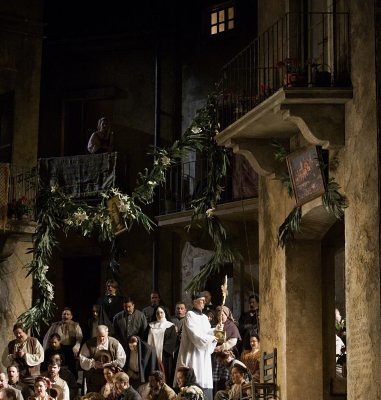 The chorus, instead of moving en masse around the stage as usually occurs in productions of this opera, is distributed throughout the vertical spaces the audience sees. Donald Nally was the chorus master for the production.

As in typical productions we do not see the home that Lola and Alfio inhabit, but we see Alfio depart and return along the path that leads stage right away from the audience.

After the joyous community mood is established, we meet two of the five persons whose lives will change forever within the next hour or so. Chinese soprano Guang Yang is Santuzza and Judith Christin, one of America’s “go to” character mezzo sopranos is the Mamma Lucia.

Christin, who played Mamma Lucia in San Diego as well (See: Tradition and Novelty in San Diego Opera’s New “Cavalleria” – March 22, 2008), shows a deep understanding of the character, while excelling in meeting Mascagni’s vocal demands for the role.

[Below: Guang Yang is Santuzza and Judith Christin is Mamma Lucia; edited image, based on a Dan Rest photograph, courtesy of Lyric Opera.] 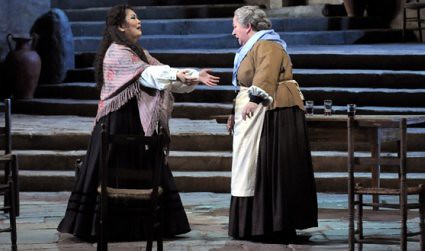 Yang, an alumna of the prestigious Lyric Opera Patrick G. and Shirley W. Ryan Opera Center, has begun to be recognized, in Berlin, Houston and Miami, as well as Chicago, for her powerful mezzo voice, large and open, and for her stage presence. In Grayson’s staging, Santuzza is engaged in tortured prayer during Palumbo’s serene Intermezzo.

A great Santuzza can steal the show, even when the cast contains a world class Turiddu (Carlo Ventre) and Alfio (Mark Delavan), and that is exactly what Yang did. The Chicago audience reacted to her bravura performance with a standing ovation and sustained applause.

Ventre, the Uruguayan tenor, is one of the great contemporary dramatic tenors, and a particular favorite of this website (See: Team Verdi: San Diego Opera’s Praiseworthy “Aida” – April 23, 2008.)  Ventre’s portrait of the doomed Turridu was searing and violent. When a distressed Santuzza screams out her “mala pasqua” curse, he assaults her and pulls her hair.

[Below: Carlo Ventre is Turiddu and Guang Yang is Santuzza; edited image, based on a Dan Rest photograph, courtesy of Lyric Opera.] 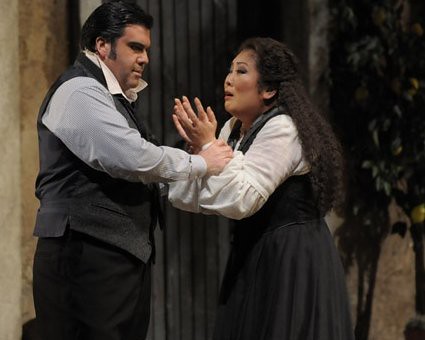 Current Ryan Center singer, Katherine Lerner, played the notoriously indiscreet Lola, choosing to take on Santuzza, without gauging how dangerous an adversary she might be.

[Below: What’s the worst that can happen? Lola (Katherine Lerner) taunts Santuzza (Guang Yang) that she is now back with Santuzza’s man, Turiddu (Carlo Ventre); edited image, based on a Dan Rest photograph, courtesy of Lyric Opera.] 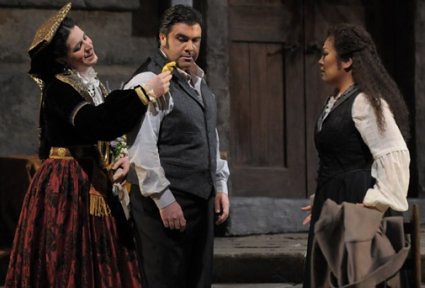 In Moshinsky’s conceptualization and Yeargan’s costuming of Alfio, he is quite the dude,  confident and elegantly dressed, a power in the community. (One recalls the Jean-Pierre Ponnelle staging in his San Francisco Opera production, that made it obvious that Alfio is a power among the local mafiosi.) 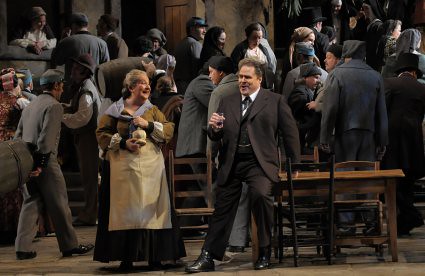 One suspects that the town’s fathers, when they sort through the details of Turridu’s death in the knife-fight and whatever happens to Lola, that they will come up with a verdict of “well, they had it coming, but don’t do it again.”

Delavan, who in the past year delighted audiences in San Francisco and Los Angeles (See: Delavan Shines in a Gleaming San Francisco “Rheingold” – June 14, 2008  and  French Connection: Friedkin’s Cinematic “Tabarro” – L A Opera September 6, 2008.) provided Chicagoans with another of his masterful portrayals. (Additionally, he is the only member of the cast to appear in both operas of the double bill.) Strong, secure, his Alfio was a gripping portrait of offended machismo, determined on revenge.

“Cavalleria Rusticana”, one the central core of the Italian repertory, truly comes alive with a trio of great singers, Yang, Ventre and Delavan, in the lead roles, insightful stage direction developed by production conceptualizer Elijah Moshinsky and revival stage director Leslie Halla Grayson, and the beautiful sets and period costumes of Michael Yeargan.