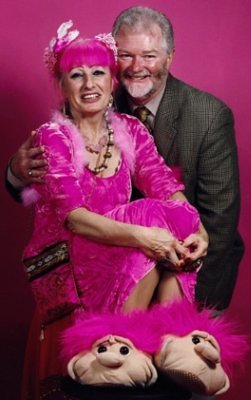 [Note from William: Continuing my interviews with persons involved in producting live operatic performances, we begin a two-part series with Ian Campbell, General and Artistic Director of the San Diego Opera.] 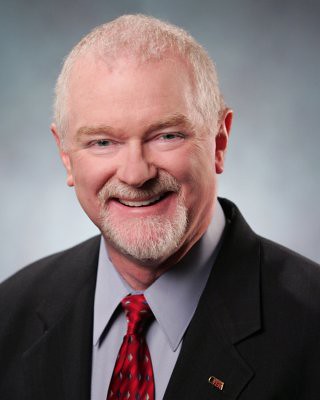 Wm: You commissioned and are personally directing a new production of Massenet’s “Don Quixote” at San Diego Opera which stars Ferruccio Furlanetto and Denyce Graves. What attracts you to that opera? Do you foresee regional American companies mounting it for the young crop of basso cantantes that have emerged in recent years?

[Below: the artist’s concept for Act I of Massenet’s “Don Quixote” in a new production at San Diego Opera; edited image, courtesy of San Diego Opera.] 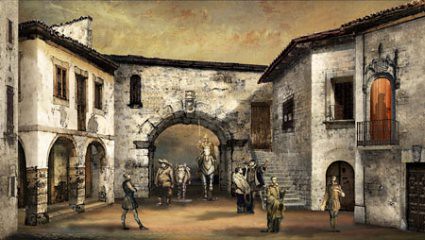 IC: Yes, that opera opens this Valentine’s Day in San Diego. In Massenet’s “Don Quixote” the music is number one, with its great melodies and faux-Spanish music. I enjoy the opera’s story even if it is not in Cervantes’ book, The characters of Don Quixote and Sancho are fascinating. 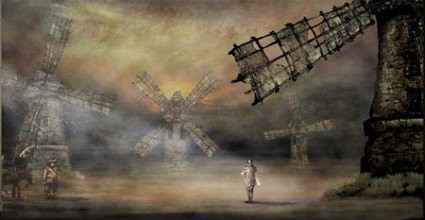 In Act III when Don Quixote is caught by bandits, the mood of the opera becomes very religious, with Quixote appearing to the bandits to be a Christlike figure, and the bandits come to ask for his blessing. Sancho is a kind of cross between Leporello and Figaro. His big aria is much like Figaro’s in Act IV of Mozart’s “Marriage of Figaro”.

Quixote becomes a beautiful character whose downfall is his passion for Dulcinee. Quixote is sensitive, easily hurt, and he dies in the final act after Dulcinee rejects him. Yet, in Quixote’s death scene, he still cannot give up his quest for the woman he cherishes. He hears her voice calling from a star.

The audience will be able to see that Dulcinee is a totally negative character. It is in Quixote’s mind that she is a beautiful person. Massenet and his librettists have created a wonderful melange of characters with stories that show them both as they are and as they seem to be to others.

I think the opera will leave people moved, as much as they are at Mimi’s death in Puccini’s “La Boheme”. I intend to have Quixote leave his lance and armor at the doorway. The audience should find it to be very touching.

Wm: By enlisting avant-garde fashion designer Zandra Rhodes in creating a new production of Bizet’s “Pearl Fishers (Les Pecheurs de Perles)”, you have had much to do with the entrance of that opera into the standard repertory of French Operas. Would you comment?

IC: Soon after I arrived in San Diego, we mounted a traditional production of “Pearl Fishers”. But in time I came to know Zandra, who has a home in San Diego County. She agreed to create the costumes for our new production of Mozart’s “Magic Flute” in 2001. It was a great success.

[Below: the original collaboration between Zandra Rhodes and San Diego Opera, costumes for the 2001 production of Mozart’s “Magic Flute”; edited image, based on a Ken Howard photograph, courtesy of San Diego Opera.] 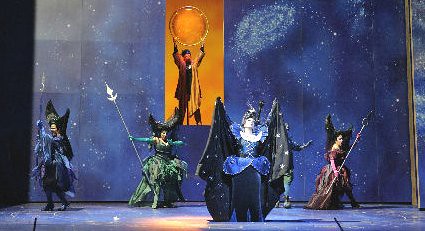 I wanted to do a new production of “Pearl Fishers” and knew she had the flair to do not only the costumes, but to design the sets as well. (See: A new look for Bizet’s “Pearl Fishers”: Zandra Rhodes in San Diego & S. F and Castronovo, Siurina Lead Magical San Diego Opera “Pearl Fishers” – May 9, 2008)

Indeed, our production of “Pearl Fishers” has been seen now in many United States cities, and, as a result of the rental fees we receive, the production has become a revenue generator for the San Diego Opera.

[Below: Ian Campbell with Zandra Rhodes, who designed the costumes for the San Diego Opera productions of Mozart’s “Magic Flute” and the sets and costumes for Bizet’s “The Pearl Fishers (Les Pecheurs de Perles)” .] 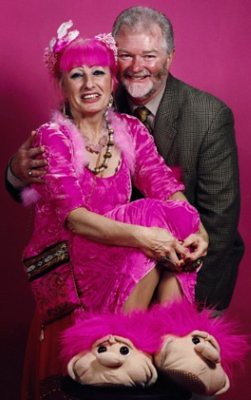 Wm: San Diego Opera has become a favorite destination for the great European basso, Ferruccio Furlanetto, who obviously has a special regard for you and your opera company. How did this relationship come to be?

IC: I have never offered Ferruccio a role that he has not agreed to sing. He is a great Boris and a great Don Quixote. There is nothing clever in casting him in these roles. However, his debut role in San Diego was quite a different matter.

I was fortunate to have met Ferruccio when I had worked at the Metropolitan Opera. When I became General Director at San Diego Opera, the company had already scheduled Verdi’s oldest surviving opera “Oberto, Conte di Bonifacio” but there was no one cast in the title role, which requires a leading basso. I asked Ferruccio if he would agree to learn the role of Oberto for the San Diego Opera. He said, “But I already know it. I performed it in a small Italian city.”

[Below: Ferruccio Furlanetto; edited image, based on a photograph, courtesy of the San Diego Opera.] 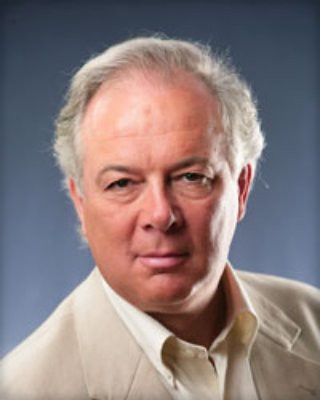 There is no major bass role in the French and Italian he does not sing. He won’t touch much in the German repertory, because he feels the voice is not right for it. However, he will perform in Richard Strauss’ “Der Rosenkavalier” in San Diego in 2011.

Wm: I did see one of those 1985 performances of “Oberto” with Furlanetto. In it the lead tenor playing Riccardo had to be replaced after the first act by his cover. It was the first time I had experienced a change of cast mid-opera.

IC: I have a favorite story about a change in performers for a role in mid-opera. I had a tenor singing Pinkerton whom I knew was not feeling well. I had an alternate for the role in costume. In the middle of the first act love duet, the original tenor walked off stage left and the other tenor crossed over from the other side and took his place.

Wm: You were born in Brisbane and grew up in Townsville off the Great Barrier Reef in Queensland. Both San Diego County and the Queensland Coast are semi-tropical with nearby broad beaches, although no coral reefs grow near San Diego. Both cities are remote from the countries from which the standard opera repertory is derived. How has your background influenced how you approach opera?

IC: One has to look at the opera audience first. When I was first running the Opera Company of South Australia, every time any opera was performed in Adelaide for the first time, it was, as far as that part of Australia is concerned, a “world premiere”.

In San Diego, there is a greater knowledge of opera by our audiences than there was in the smaller cities of South Australia in the 1960s. Even so, although we have a lot of San Diegans who travel to see opera in other cities, most of those who go elsewhere will usually see the standard operas, rather than the rarities.

So, I try to have some operas that are new or rarely done. We did Catan’s “Rappaccini’s Daughter (La Hija de Rappaccini)”, the only opera by a Mexican composer performed in the United States.

Achieving the proper balance between the revivals of the standard repertory and less familiar and new works is a critical concern. We try to have operas that are “safe”, mixed with those that are unfamiliar but easy for the audiences, and others that challenge them.

You have to look at the local market to know what will work. We will schedule Pizzetti’s “Murder in the Cathedral (Assassinio nella Cattedrale)” in a future season. What I try to do is to have singers that the audience knows and trusts and who have followings. Ferruccio Furlanetto will do “Murder in the Cathedral”. It is a post-Puccini tour de force that pushes the audience a little bit more.

Wm: You were a singer with a predecessor company of Opera Australia and sang seven seasons with them, one of the seasons being at the Sydney Opera House! How has your experience singing the tenor character roles affected your relationships with the artists, choristers, and musicians with whom you work?

IC: Yes, I sang with the company for seven years. I joined them in 1967 when they made the decision to become a full-time opera company. They came to be known as the Elizabethan Theatre Trust Opera Company, and provided a group of us who had operatic voices with full time contracts. I was a well-known amateur singer, and became a quality comprimario artist, determined to be the best I could be.

Creating a fledgling opera company proved to be an invaluable experience. We would load the sets, drive through the bush, do the laundry, do our own makeup using greasepaint. I had even been doing radio broadcasts when I was in Townsville. As I look backwards on these experiences, I can see a logical progression to where I am today.

Although I had planned to be a lawyer, after the seven years performing, I moved into operatic management. I would joke that my only preparation in law was in contracts, torts, and criminal law, but that that is all you need from the legal profession for opera administration.

I know all of the aspects as a singer and as a stage director. I have a closeness with singers that I enjoy. When I engage singers, I have already auditioned them. They know we will run a opera company that is good for singers. We have only one function – to get the singers to the stage in the best possible condition.

Wm: Your system of note-taking on the artists you audition is well known. What vocal attributes are you looking for? How do your notes give you the confidence to engage singers for roles four years into the future?

IC: I keep pretty objective note cards on everyone I hear. I am listening to what the voice is. I look for an attractive voice with nice color. Volume does not impress me. I often will say to a singer – “Stop singing that. What do you have that is more lyrical? What do you have that fits your voice better?”

Wm: Which early calls of “emerging great voices” have been particularly satisfying for you? How often are you wrong?

IC: San Diego Opera has been a place where major stars have appeared early in their careers. Renee Fleming and Ramon Vargas would be examples of artists who appeared in San Diego early on.

Some established stars choose San Diego Opera to introduce new roles. As an example, Richard Leech did his first Werther in Massenet’s “Werther”, his first Don Jose in Bizet’s “Carmen” and his first Turiddu in Mascagni’s “Cavalleria Rusticana” at San Diego Opera.

Often, I will hear a voice that I know will be right for a future opera. I heard Piotr Beczala in performance and he remained in my mind until the right role came up. (He will be Rodolfo in Puccini’s “La Boheme” in 2010.) I believe that Stephen Costello is an extraordinary talent, and I have engaged him to sing Romeo in Gounod’s “Romeo et Juliette” in 2010 and the title role in Gounod’s “Faust” in 2011. In each case Costello’s lead soprano will be his wife Ailyn Perez.

But I would place Anja Harteros high on the list of major voices whom I had signed early in their careers. I heard Harteros in Bonn, Germany some years ago. She was about 25. I said I would like to have lunch. I said I think you should be singing Violetta in Verdi’s “La Traviata”.A few months later she said she would do it. I said I would direct it and she agreed to come.

I signed her for Maria Amelia in Verdi’s “Simon Boccanegra” at that same time. Subsequently, I have signed her for Mimi in “La Boheme” (with Beczala as Rodolfo) and the Marschallin in “Der Rosenkavalier”. The relationship with Harteros goes back to our meetings in Bonn.