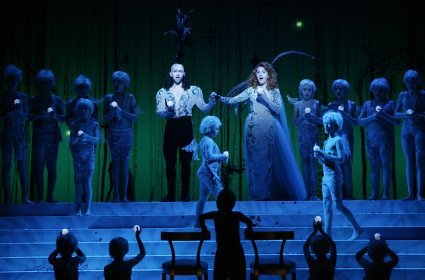 Houston Grand Opera, in the second year of a five year cycle honoring 20th century English composer Benjamin Britten, has created a new production of “Midsummer Night’s Dream” in collaboration with the Canadian Opera Company of Toronto and Lyric Opera of Chicago. (The production will appear in Toronto May 5 through 13, 2009, with a different cast, excepting Laura Claycomb’s Tytania.)

Conductor Patrick Summers (Houston Grand Opera’s musical director) is a strong advocate for the opera. As the idea for a new production was being discussed, Summers asked the production staff if it were possible to create a set that provided a visual counterpart to Britten’s tremulous glissandi that mark the appearance of the fairyland at the beginning of the opera.

Their response to Summers’ query was extraordinarily inventive, although requiring technical staff in several parts of the world to realize the concept. A unit set was created, representing fairyland, on which set everything that happens in the opera takes place. Thus, all of the activities of the mechanicals (“rustics” is Britten’s term), including their play, and all of the affairs of the mortal couples – the four lovers in their dreamworld as well as Theseus and Hippolyta – occur in the space that constitutes the fairy kingdom.

Tytania’s bower is created from a long sheet of a sheer plastic material that stretches across the entire stage and lifts into the air or descends onto the stage floor depending on what is supposed to happen onstage.

The side walls and rear of the stage are covered with similar material, whose principal color is an eerie light green onto which is painted otherworldly vegetation. There, plants appear to grow downward from the top of the stage, representing, one infers from the program notes, how disorienting the fairy world appears to mortals.

(Houston Grand Opera General Director Antony Freud gave a post-opera briefing with Summers on the technical aspects of the new production. Because the materials chosen had never before been created at such a size and for such a purpose, Freud and Summers admitted that no one was sure how and if their ideas would actually work in practice.

In fact, all were amazed that the material for Tytania’s bower – which has been nicknamed the “sleep sheet” – creates air currents when it moves.  Such currents cause gently rippling movements in the side and back panels, creating an unexpected effect that proved wholly consistent with the mood they were trying to evoke.)

Another feature of the fairyland is a conveyance in which Oberon (Welsh countertenor Iestyn Davies) is transported from place to place – a trapezoid-shaped bucket, open on all sides, permitting Puck (American actor Jon Michael Hill) to crawl up to share the space with Oberon when the fairy king needs his operative with him. Often the conveyance is quite a distance from the stage floor, at one point rapidly transporting Davies almost up to the highest level visible to the audience.

[Below: Dale Ferguson’s unit set for “Midsummer’s Night Dream”; the “sleep sheet”  is the prominent feature that drapes across the entire stage. Oberon (Iestyn Davies) is transported in his golden conveyance seen at top left center while the fairies manage the train of Tytania (Laura Claycomb) who holds the hand of the Changeling Boy; edited image, courtesy of Houston Grand Opera.] 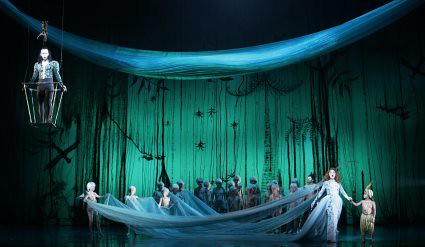 The production was conceived by Director Neil Armfield, with sets and costumes designed by Dale Ferguson. The costumes for Oberon and Tytania are strongly influenced by Maori artistic motives. The exotic costumes, shimmering sets, Britten’s otherworldly harmonies and the melding of the sounds of Davies’ alto countertenor and Claycomb’s ethereal coloratura soprano, themselves would be sufficient to transport the audience to a magical land.

But the fairyland proved to be a richly endowed habitat. Performing in a speaking, non-singing role, Hill’s acrobatic Puck, shimmying up a pole or turning cartwheels, brought cheer whenever on stage.  It did seem naughty for him to steal the changeling boy from the Queen, but he was under orders from his sovereign, and the customs and laws that govern the fairyland are surely beyond our ken.

What one does understand is what a superb job the four child soloists and the Houston Grand Opera’s Children’s Chorus, under Children’s Chorus Director Karen Reeves, did in playing the fairies, and how crucial this element was to the success of the production. The soloists Madeleine Delgado (Cobweb), Valerio Farris (Mustardseed), Ekaterina Gorlova (Moth) and Eliza Masewicz (Peaseblossom) deserve special praise, especially for their part in the chorus Lullaby. Never harm, nor spell, nor charm. Having a fairy guarding the sleeping queen, a slingshot in hand, creates an enchanting image.

[Below: Oberon (Iestyn Davies), left, is kissed by Tytania (Laura Claycomb), as Puck (Jon Michael Hill) and the Changeling Boy look on; edited image, based on a photograph provided by the Houston Grand Opera.] 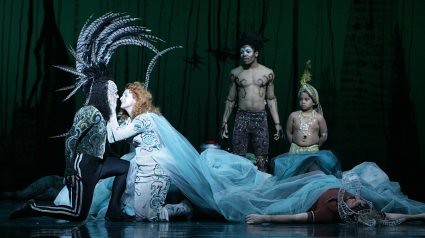 The mortal world brings together two human classes that are almost as unalike each other as each class is from the fairies. In this Armfield and Ferguson collaboration, all of the mortals are in modern dress, fixing the time in which the events are set at around 1960, when the opera premiered.

The Athenian rulers – Theseus (Ryan McKinny) and Hippolyta (Leann Sandel-Pantaleo) – are costumed in an homage to John and Jackie Kennedy, who had been intriguing figures in the American presidential campaign of 1960 that led to the beginnings of the “Camelot Era” in the White House the next January.

I suspect that one of the principal reasons “Midsummer Night’s Dream” is revived often enough to be one of the more familiar 20th century works, is that the scenes with the artisans (that the Bard calls the mechanicals and Britten calls the “rustics”) are among the funniest in all of 20th century opera.

The banter between the rustics and the absurd language, with its jumbled words in contradictory contexts, that they use in their play Pyramus and Thisbe, is, of course, the invention of the Bard.

However, Britten does not merely set the Bard’s jokes to music. He creates an affectionate parody on 19th century Italian opera. Pyramus’ music, sung by Bottom (Matthew Rose) is in the style of Verdi. Thisbe’s, sung by Flute (Stephen Cole), is in the style of Donizetti (the bel canto composer, who, because of the mad scene in “Lucia di Lammermoor”, we most associate with the flute). Anyone who doubts that Britten would have been able to create operas in the romantic style we associate with the 19th century, should study Britten’s wizardry in the music of the rustics’ play.

Rose and Cole proved to be superb comedians and had the requisite vocal technique to make these lead parts credible. Their excellent supporting cast included Robert Pomakov (playing Peter Quince), James J Kee (Starveling), Adam Cioffari (Snug) and Jon Kolbet (Snout). In one of the rare occasions when an animal gets a highly visible role in an opera production, Starveling’s dog, who had much to do, was played by Buddy. 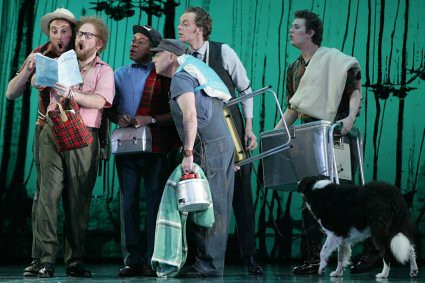 The mortal couples Lysander (Norman Reinhardt) and Hermia (Marie Lenormand), Demetrius (Liam Bonner) and Helena (Katie van Kooten) were attractively cast. The men and Hermia are in the collegiate clothes that an upscale college might have expected at the beginning of the 1960s, van Kooten clad in pedal pushers and a sleeveless blouse, as if she were dressed for shopping in some Athenian supermarket.

Van Kooten is the only one of the four principal mortals whose Houston Grand Opera debut was in “Dream”. It proved an auspicious debut.  She displayed confidence in the quartet of the four lovers’ quarreling, especially her extended passage that begins Injurious Hermia, most ungrateful maid.

Marie Lenormand, who had been impressive as Siebel in Gounod’s “Faust” (See:  A “Faust” Surprise in Houston – January 23, 2007), was a sympathetic, vocally secure Hermia.

This is my fourth straight review of a Houston Grand Opera performance in which Liam Bonner appeared, although in the first three operas he was cast in a comprimario or a character baritone role. The part of Demetrius is the most important role I have heard him sing so far, and it was a rich performance, nicely sung and acted, confirming that an important career in the light baritone roles is now well-established. 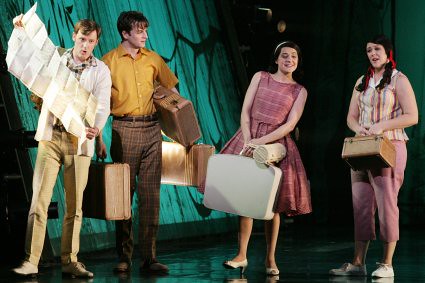 Patrick Summers, who has closely studied Britten’s musical works, conducted authoritatively.  Damien Cooper was the lighting designer and Denni Sayers the choreographer. The scuffle between Lysander and Demetrius earned yet another credit for Houston’s resident fight director, Brian Byrnes.

It is the fairyland and the rustics’ play that create the immediate connection between this opera and its audiences, and the Houston Grand Opera did Britten proud. Claycomb, as expected, was a radiant Tytania, and her return to Houston in Spring 2010 in Handel’s “Xerxes” should be marked on the calendars of aficionados of coloratura singing.

Iestyn Davies, only 29 years old, is a thoroughly likable Oberon. One appreciates just how important Britten’s creation of Oberon as an alto countertenor was for the contemporary prominence of this vocal category, both in operas written directly for it and for the revival of Baroque masterpieces.

[The rustics’ play is over and all of the mortals have left. King Oberon (Iestyn Davies) and Queen Tytania (Laura Claycomb) and the fairies take over their stage; edited image, based on a photograph, courtesy of Houston Grand Opera.] 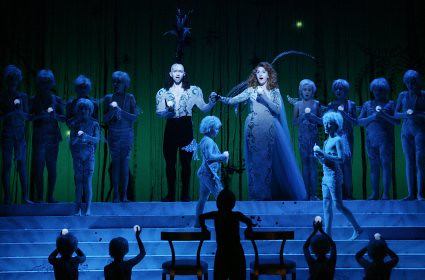