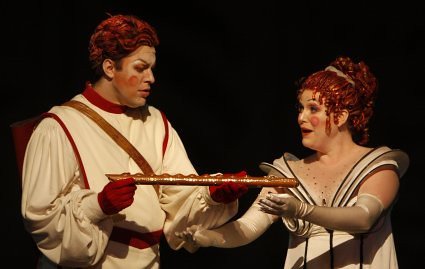 The Los Angeles Opera continued its month dedicated to Conductor James Conlon’s presentation of Mozart’s masterpiece, “Die Zauberfloete (The Magic Flute”), with an alternate cast of artists in the five principal roles from the previous night’s opening of the opera’s run. (For a review of the opening performance, see: Conlon’s Magical Revival of Mozart’s “Flute” at L. A. Opera – January 10, 2009)

Kaiser’s Los Angeles debut originally was scheduled to be Steva in Janacek’s “Jenufa” in Fall, 2007. However, his mentor (and Los Angeles Opera General Director), Placido Domingo, had signed on to conduct Gounod’s “Romeo et Juliette” at the Metropolitan Opera, with Rolando Villazon and Anna Netrebko scheduled to repeat their 2006 roles at the Los Angeles Opera for which Domingo conducted. When Villazon withdrew from his commitments during this period, Domingo invited Kaiser (who, of course, was under contract to Domingo’s L. A. Opera) to become Netrebko’s Romeo.

Tamino is a role closely associated with Kaiser’s career to date, that, before he took over Villazon’s Romeos, was to be the role of his Met debut. He and Conlon were both associated with Kenneth Branagh’s English language film of “The Magic Flute”, set in the Great War, which begins with Kaiser swimming through treacherous water in a battle scene.

He was a triumphant Tamino, whose handsomeness shone through Tamino’s stylized costume, vocally secure – with a beautiful sound. Kaiser is yet another example that demonstrates that the contemporary world has an uncommonly large number of leggiero tenors of the first rank.

[Below: Joseph Kaiser is Tamino and Erin Wall is Pamina; edited image, based on a Robert Millard photograph, courtesy of Los Angeles Opera.] 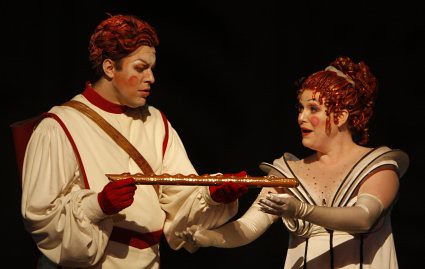 His Pamina, Erin Wall, complemented Kaiser perfectly. Wall, possessing a large and attractive voice, was a delight in Pamina’s duet with Papageno, Bei Maennern, welche Liebe fuehlen. Her solid presentation of Ach, ich fuehl’s suggested that the growing international reputation of this alumna of the Chicago Lyric Opera’s Center for American Artists is well-deserved. As she and Kaiser’s Tamino pursued the trials of fire and water, one glimpsed how Mozart, one of the Enlightment’s true feminists, infused his foresight of a coming age of gender equality into Pamina’s role.

This performance was the American debut of Austrian baritone Markus Werba, who has made Papageno a signature role, appearing in most of the prestigious European opera houses. One of the few in either cast who is a native German speaker in an opera with extensive spoken dialogue in German, he was impressive in the role, with a firm, pleasant baritone. Much more than Nathan Gunn, who sings five of the Papagenos to Werba’s four, he accentuates the “birdy” aspects of the role, often seeming to adopt the posture of a small sparrow or other song-bird.

[Below: Markus Werba is Papageno and Amanda Squitieri is Papagena; edited image, based on a Robert Millard photograph, courtesy of Los Angeles Opera.] 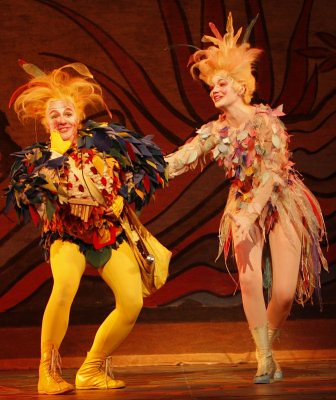 Placido Domingo protege Amanda Squitieri was charming in the small role of Papagena, one with that always seems to establish rapport with opera audiences. Last Summer, this website had praised her Lisette and that of the Prunier of Greg Fedderly (this Flute’s Monostatos) as an uncommonly good second couple in that melodious work (See: Marta Domingo’s Reconceptualization of “Rondine” Returns to L. A. – June 7, 2008.)

[Below: Albina Shagimuratova is the Queen of the Night; edited image, based on a Robert Millard photograph, courtesy of Los Angeles Opera.] 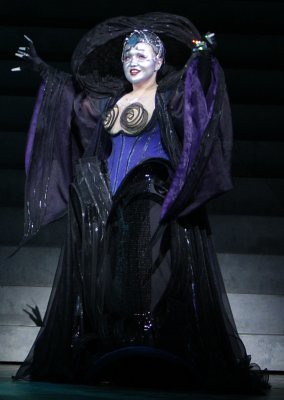 Russian coloratura soprano Albina Shagimuratova, fresh from triumphs at Houston Grand Opera as the Queen and Gilda in Verdi’s “Rigoletto”, suggested that Tashkent may be the latest Asian city to produce a major opera star. After winning the Tchaikovsky competition in Moscow less than two years ago, she has performed the Queen in Salzburg and Berlin, as well.

Fully in command of both the soulful legato and stratosphere-reaching coloratura requirements of the Queen’s vocal performance, her first appearance at the end of the opera curtain calls began a standing ovation that greeted the opera’s principals and conductor.

[Below: Morris Robinson is Sarastro, surrounded by his Priests; edited image, based on a Robert Millard photograph, courtesy of Los Angeles Opera.] 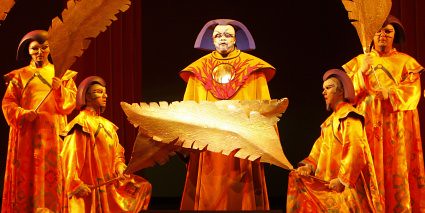 The priesthood was in fine hands, with Morris Robinson possessing the requisite low F and sonorous dignity to make a convincing Sarastro. Matthias Goerne, an esteemed Schubert recitalist and famous Papageno in Europe, convinced the Los Angeles Opera management to allow him to make his L. A. debut in the “cameo role” of the Speaker, whose brief part contains a fragment of melody that represents Mozart at his most inspired. Goerne is scheduled for all nine performances.

[Below: Matthias Goerne is the Speaker; edited image, based on a Robert MIllard photograph, courtesy of Los Angeles Opera.] 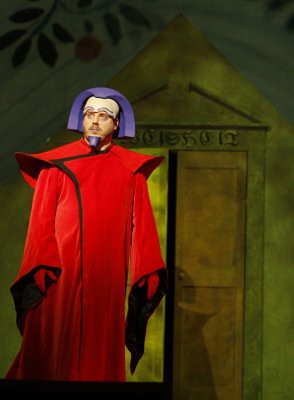 No part of nor part in Mozart’s fairy tale was compromised by casting inadequate singers. The First Lady was Tamara Wilson, who had starred opposite Ramon Vargas in Houston Grand Opera’s production of Verdi’s “Ballo in Maschera” (whose review may be seen at Vargas, Podles Brilliant in Puzzle Box “Ballo”: Houston – November 2, 2007.)

The Second Lady was Lauren McNeese, the “River Maiden” Wellgunde in San Francisco Opera’s American Ring production of Wagner’s “Das Rheingold”. Beth Clayton played the Third Lady broadly and amusingly, as if she were mimicking Carol Burnett in one of her wacky variety show skits. The uniformly excellent trio is scheduled for all performances. 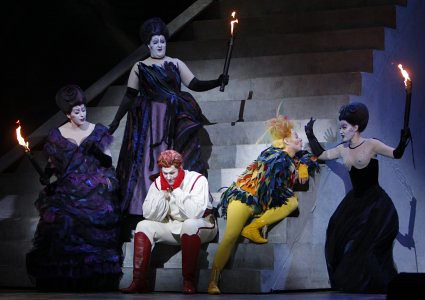 Greg Fedderly is one of the nation’s superb character tenors and Monostatos is an absolute must role for this category of operatic performer. Fedderly, who plays all of the performances (as he did the recent San Francisco Opera mounting of this production) has both the zany presence and vocal skills that this odd character requires.

[Below: Monostatos (Greg Fedderly) is seized by fellow slaves as Pamina (Erin Wall) and Sarastro’s Priests look on; edited image, based on a Robert Millard photograph, courtesy of Los Angeles Opera.] 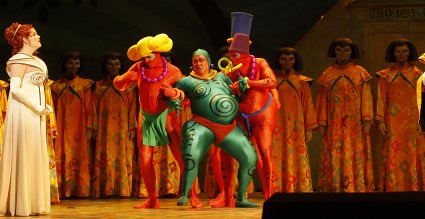 Another tie to Houston Grand Opera is Beau Gibson, also making his Los Angeles Opera debut. This reviewer was present at the night he provided the voice of Gounod’s “Faust” title role for the indisposed (but silently performing) William Burden. That feat is chronicled at A “Faust” Surprise in Houston – January 23, 2007.

Gibson, with Jordan Bisch (another L. A. Opera debut), were respectively the FIrst and Second Armed Men. Others in the adult cast were Hak Koo Kim as the First Priest, Daniel Armstrong as the Second Priest and Robert Hovencamp as the Third Priest. The Three Boys in the matinee performance were Josiah Yiu, Gregory Sliskovich, and Justus Bradshaw.

California Dreaming: the L. A. Opera “Flute” on a sunny winter day

One of the delights of attending a matinee performance at the Dorothy Chandler Pavilion on a balmy January afternoon is that the open air Pinot Grill, one of the Patina Restaurant Chain, with its gourmet dining and excellent wine list, opens several hours before the 2 p.m. performance.

My wife and I joined Tom, my website associate, in an elegant lunch, of which Papageno himself, appreciative of the creature comforts, would have approved. Situated in the Music Center’s courtyard with a view of the banners heralding the artistic home of Placido Domingo and James Conlon, it added another degree of luster to an afternoon in which superb singing of great music occurred. 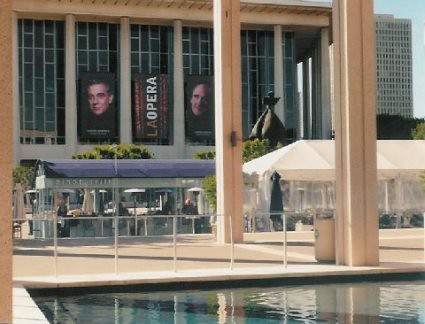 My operawarhorses.com colleague Tom has promoted “Operatourism” to Southern California in his recommendations on enjoying opera in Los Angeles and San Diego. For opera-goers intrigued by the idea of an impulsive vacation, one should note that it is possible later in January to combine the L. A. “Flute” with a San Diego Opera performance of Puccini’s “Tosca”, to celebrate both Sarastro’s Realm of the Sun and Puccini’s 150th birthday.

Tom’s guide to operatouring the Southland may be found at: Tom’s Tips for the L. A. and San Diego Opera Scenes, Part I

and also: Tom’s Tips for the L. A. and San Diego Opera Scenes, Part II