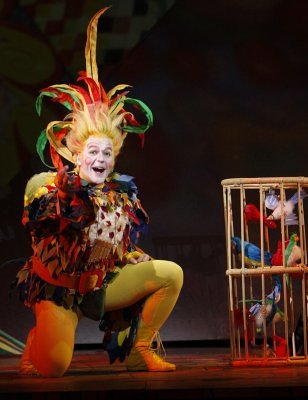 Opera-goers attending either of the performances of the Los Angeles Opera during the second weekend of January 2009 had a world class experience – conductor James Conlon leading the Los Angeles Opera Orchestra in a spirited and extraordinarily well-sung performance of Mozart’s “Magic Flute” in Sir Peter Hall’s production, utilizing the cheerful and imaginative sets and costumes conceived by famous British cartoonist Gerald Scarfe.

[Below: James Conlon is conductor of the Los Angeles production of “The Magic Flute”; edited image, based on a Ravinia Festival photograph provided by the Los Angeles Opera.] 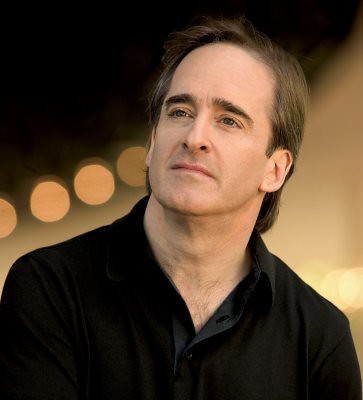 There were two performances that weekend – Saturday night and Sunday afternoon – whose casts differed in the five lead roles. Even with the cast variations, each performance was vocally, histrionically and visually impressive.

This review will concentrate on the Saturday night performance, whose quintet of principals consisted of Matthew Polenzani (Tamino), Marie Arnet (Pamina), Nathan Gunn (Papageno), L’Ubica Varicova (Queen of the Night) and Guenther Groissboeck (Sarastro). A second review, to be posted subsequently, will discuss the alternate quintet of principals.

However, some general observations about both performances, and, therefore, both casts, may be made. The performances were a tour de force for Conductor James Conlon, who appears to have limitless appreciation of and insights into Mozart’s great masterpiece, composed in the final year of his short life.

The casting, including a long overdue Los Angeles Opera debut by Nathan Gunn, showed the active involvement of Conlon in assembling a vocal team that matched Conlon’s high performance standards.

One of the remarkable and ultimately appealing aspects of the production is the costuming. When you go to see, say, Polenzani and Gunn (to take the two artists currently best known to American audiences) in the production’s costumes, they are subsumed into the images of a fairy tale world – a red-booted Tamino in a red-trimmed white tunic and trousers with metallic red hair, Papageno in brightly colored plumage.

[Below: Matthew Polenzani as Tamino; edited image, based on a Robert Millard photograph, courtesy of Los Angeles Opera.] 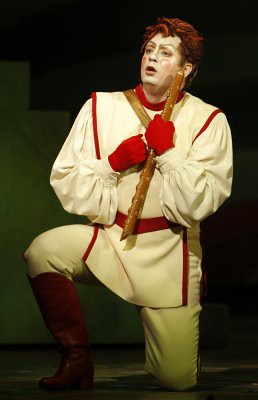 Unlike other opera performances, during which I might be subconsciously thinking “I am watching Polenzani play Count Almaviva” or “I am watching Gunn play Zurga” – I find myself consciously relating to the characters on stage as Tamino and Papageno.

Part of this reaction, of course, is familiarity with this production’s costuming scheme, in which there are six distinct worlds, each with its own costume style: Prince Tamino’s,  Sarastro and the Priesthood’s, Papageno/Papagena’s, Monostatos and his fellow slaves’, the Three Genies’, and that of the Queen of the Night and her Ladies. (Pamina’s costume and blazing red hair place her in Tamino’s world, although her costume has minor features that remind one of the fashions from the Realm of the Night.)

Each of the five principals has quite a bit to do in the opera, but the person to whom the instrument for which the opera is named and who successfully employs its inherent power is Prince Tamino. Polenzani, whose pleasing leggiero voice encompasses a beautifully controlled vibrato, excelled in the role.

Gunn’s feather-covered bodice was a departure from some of the barechested costumes he has recently been expected to wear – costumes that presumably are not offered to just any baritone – but permits the audience to concentrate its attention on his stylish, light baritone and comic personality in a role that allows him to romp.

[Below: Nathan Gunn is Papageno; edited image, based on a Robert Millard photograph, courtesy of Los Angeles Opera.] 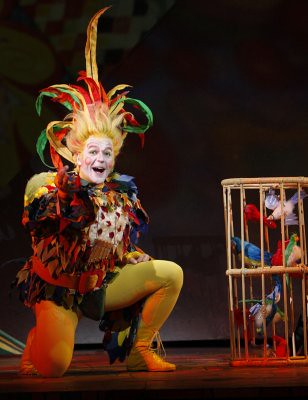 When this production was mounted in San Francisco in Fall 2007, the Queen of the Night’s first aria, performed high above mid-stage as she is strapped to a replica of a moon that descends into stage view from the “sky”, proved a challenge for a respected singer with only a modest-sized voice.

In contrast, the debuting L’ubica Vargicova was fully in command of the situation in L. A., presenting an affecting portrayal of a grieving mother in the introductory passages of her first aria Zum Leiden bin ich auserkoren, followed by the coloratura fireworks of the aria’s second section.

The Queen, of course, returns again in the second act, once for yet another coloratura show piece, the vengeful Der Hoelle Rache, and Varicova showed technical brilliance and firm control in this taxing aria that defines coloratura virtuosity. (Veteran opera-goers in that Los Angeles audience surely are considering a trip to the San Diego Opera in March, when Varicova assays the role of Gilda in Verdi’s “Rigoletto”.)

[Below: L’ubica Vargicova is the Queen of the Night; edited image, based on a Robert Millard photograph, courtesy of Los Angeles Opera.] 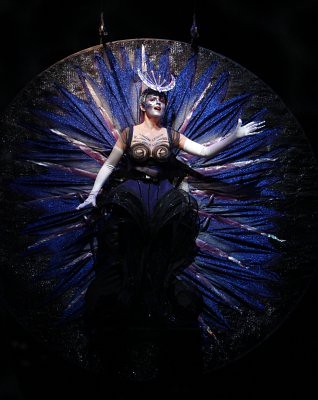 The role of the Queen of the Night is noted for requiring secure notes high in the soprano range, and her adversary Sarastro’s vocal line descends low into the range expected of a world class basso, a full four octaves below the Queen’s ultra-high “F”, which is the one found nearly two and a half octaves above Middle “C”.

Californians had last seen Guenther Groissboeck last Summer as Fafner in San Francisco Opera’s production of Wagner’s “Das Rheingold”. It was a pleasure to hear him sing, beautifully and with steadiness, the imposing music Mozart wrote for Sarastro, with its frequent descents into the lower reaches of the basso’s range.

The woman Sarastro has chosen to mentor on her journey into enlightenment is Pamina, and the performance of Swedish soprano Marie Arnet in this role was another of the performance delights. Arnet’s heartfelt Ach, ich fuehl’s was superbly sung, displaying the range of expressiveness that this sad aria requires.

[Below: Guenther Groissboeck is Sarastro and Marie Arnet is Pamina; edited image, based on a Robert Millard photograph, courtesy of Los Angeles Opera.] 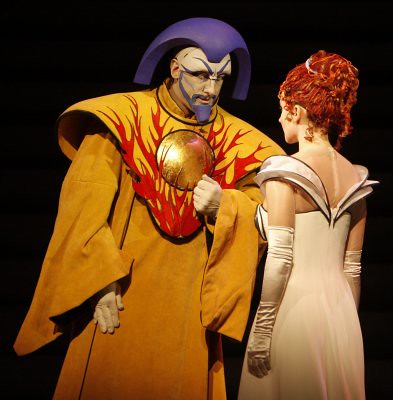 The rest of the cast, except for the Three Genii, nicely done by boy sopranos Caleb Glickman, Stephen Cruz and Ryan Schiller, are scheduled for all performances, and I will comment on the others in my review of the second quintet of principals who performed the next afternoon.

[Below:  Marie Arnet is Pamina, with the Three Genii (Caleb Glickman, Stephen Cruz and Ryan Schiller); edited image, based on a Robert Millard photograph, courtesy of Los Angeles Opera.]

As a preview of the second review, I offer the following advice. For a person who might be considering attending one of the later Los Angeles Opera performances of “Flute”, but who might be undecided on which cast to attend, I can report that each cast is equally accomplished in performing Mozart’s music, and, if it were a contest between the two “quintets”, I would score it as a “draw”.

For those opera lovers wondering if they should go at all, please consider this judgment. Those who attend any of the scheduled performances in Los Angeles will be experiencing the work of one of the world’s great conductors leading a first class opera orchestra in a Mozart masterpiece that the conductor obviously adores, with a cast of singers as good as any that can be assembled in the world. One will also be seeing one of the most inventive and artistic of contemporary productions, whose imaginative costumes alone are part of the performance magic.

If you are an aficionado of great Mozart singing, and have the time and resources to see both casts, my recommendation is, go for it!

For a review of this production at San Francisco Opera, see: The Magic Scarfe: “Zauberfloete” in San Francisco – October 13, 2007