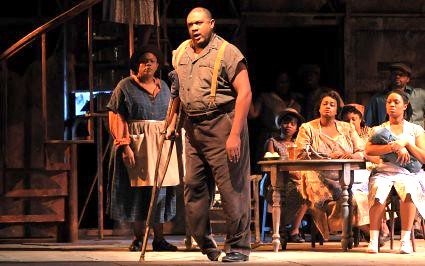 Periodically, I cite productions that I regard as of more than routine interest, that are revivals of productions I have reviewed on this website. In each case listed below, the production is one I have seen performed at one opera company, that is scheduled to be performed at another. Obviously, this is not meant to be an exhaustive list of revivals of great productions scheduled to be seen in some part of the world, but recommendations made out of personal experience of exciting performances revived elsewhere with worthy casts.

Each of the productions appearing on the “best bet” list is strongly recommended. Each production previously had an extensive review on this website which is cited. In the case of some of the revivals, I am planning to attend a performance of the revival. Those interested in these four productions should be aware that each is likely to sell out, sooner rather than later.

[Below: the Queen of the Night (Erika Miklosa) arrives, observed by Tamino at left, in Gerald Scarfe’s sets; edited image, based on Terrence McCarthy photograph, courtesy of San Francisco Opera.] 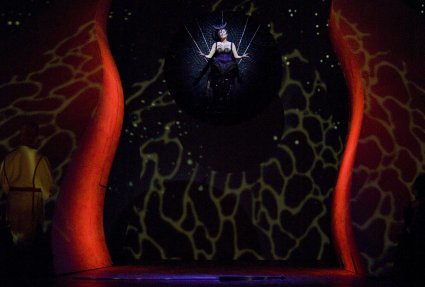 Whether or not one is familiar with artist/cartoonist Gerald Scarfe’s amazing contributions to the classic rock flick Pink Floyd The Wall, itself operatic in its scope, Scarfe’s whimsical approach to the set designs, costumes and menagerie of Mozart’s fanciful opera gives yet another clue to the mind of this genius of imagination.

Two casts, all new to Los Angeles Opera, alternate the principal roles: Matthew Polenzani and Joseph Kaiser are the Taminos, Nathan Gunn and Markus Werba are the Papagenos, Marie Arnet and Erin Wall are the Paminas, L’Ubica Argicove and Albina Shagimuratova are the Queens of the Night, Guenther Groissboeck and Morris Robinson are the Sarastros. James Conlon conducts, Stanley M Garner directs the Peter Hall production.

For a review of an earlier performance, see: The Magic Scarfe: “Zauberfloete” in San Francisco – October 13, 2007

The David Hockney production of “Tristan und Isolde”, one of the treasures of the Los Angeles Opera, has charmed audiences in California in three different decades, most recently with a 2006 mounting in San Francisco and a 2008 return to its home audience at the Dorothy Chandler Pavilion. 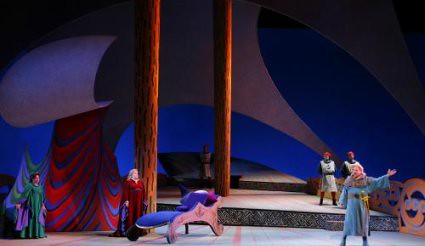 What Hockney has created is a production of “Tristan” that is as colorful and appealing to the eye – with its palette of pastels for the ornate sets and solid primary colors for the costumes – as Wagner’s sonorities are to the ear.

Chicago audiences are scheduled to experience something that no California audiences have heard so far – Deborah Voigt in performance as Isolde. Clifton Forbis is Tristan.

Juha Uusitalo, whose Kurwenal is one of his most effective roles, co-stars with the estimable Petra Lang as Brangaene and Stephen Milling as Marke. Jose Maria Condemi is the director and Sir Andrew Davis conducts.

For reviews of the two most recent mountings of this production, see: The Runnicles, Hockney “Tristan” in S. F. – October 22, 2006 and:

Opera Colorado is the next stop for the popular San Diego Opera/Michigan Opera Theatre production of this youthful work of the composer of “Carmen”. The sets and costumes fit beautifully with the exotic melodies of this story of life in a fishing village in a Sri Lankan “once upon a time”.

[Below: Zandra Rhodes’ sets for the residence of the Priestess Leila; edited image, based on Ken Howard photograph, courtesy of San Diego Opera.] 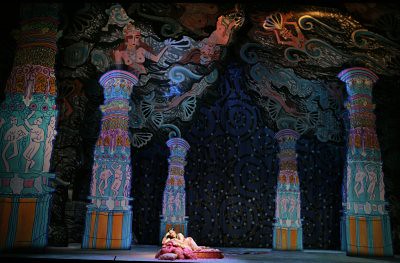 The famous first act duet between Nadir and Zurga Au fond du temple sainte is surely now the most performed operatic duet between men in the operatic repertoire, but it is just one of many luscious pieces for the trio of stars.

Sebastian Lang-Lessing, debuting in Denver, is back at the podium for the Rhodes show (having performed it to great acclaim at San Francisco Opera). Heidi Stober is Leila, Brian Mulligan (whose successful appearance as Marcello in San Francisco Opera’s “La Boheme” was reviewed in November 2008) is Zurga and David Cushing is the Nourabad.

Of particular note in the Denver performances is the appearance of Sean Panikkar, a mid-decade Adler Fellow at San Francisco Opera popular with its audiences – surely the first tenor with Sri Lankan roots to sing the role of Nadir in North America.

The Lyric Opera of Chicago presented this production in November and December 2008 and it instantly became the best selling opera in Lyric history, requiring the addition of a 14th performance! San Francisco Opera, which scheduled only seven performances, will almost certainly sell out at an early date.

The sets by Peter J. Davison and stage direction by Francesca Zambello give the opera a feel of a first rank Broadway show, massively enriched by the orchestra and chorus of major international opera company, as in its mountings at Washington National Opera, Houston Grand Opera and Lyric Opera of Chicago.

[Below: Porgy (here played by Gordon Hawkins) with residents of Catfish Row, with Laquita Mitchell, who is to play Bess in San Francisco, at the far right; edited image of a Dan Rest photograph, courtesy of the Lyric Opera of Chicago.] 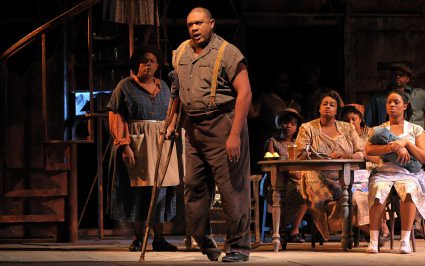 For a recent review of this production, see: The Zambello “Porgy and Bess” An Historic Success at Chicago’s Lyric – November 18, 2008