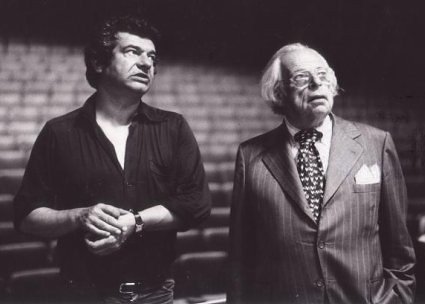 The “standard repertory” of opera is dominated by works created by citizens of four European countries – Italy, Germany, Austria and France. Many of the singers, conductors, set designers and stage directors associated with opera production are themselves from those four countries, although if you look at the world supply of operatic performers, there would certainly be a far greater percentage of artists from outside those four nations today than would have been the case, say,  three quarters of a century ago.

As we are beginning to understand again during our current world economic crisis, the performing arts prosper during “business as usual” times and tend to wilt during extremely troubled times.

World War II proved an especially problematic time for opera performance, because for most of the War the leadership of each of the four countries enumerated in the first paragraph were the formal enemies of the coalition of forces that proved victorious, and it was these four countries on whose land much of the European part of the war took place. The operatic infrastructure, with some exceptions, tended to be centralized at opera houses in big cities, many of which suffered great wartime damage.

It was well into the postwar period before all of the major opera companies in the four countries had resumed functioning. Artists of great talent interested in performing in, conducting or producing operas, had limited options, but among those options were the intact companies of the United States, especially the Metropolitan Opera in New York City and the San Francisco Opera.

In the 1950s, the Met was directed by a British citizen, Sir Rudolph Bing. The San Francisco Opera was directed in the early years by an Italian born conductor Gaetano Merola, followed by another conductor and Austrian refugee, Kurt Herbert Adler. Each of these three transplanted Europeans had to wrestle in the postwar years with issues of which artists who had spent their war years in one of the four countries might have crossed this or that line in support of their nation’s war policies.

In this observation of an important anniversary in Jean-Pierre’s career, the focus is not on Ponnelle’s wartime experiences – he was eight when the Vichy government took control of France and 13 when the war ended – but that the assignment that Adler gave him was to design the sets for a double bill of Carl Orff’s works – “Carmina Burana” and “Die Kluge”.

Tony Palmer’s current film “O Fortuna”, which delves into Orff’s relationship with the Nazi regime, revives the controversy over information that was known or suspected about Orff in the late 1940s.

Many of Adler’s choices in the 1950s seem to be aimed at reconciliation with artists from the nations on the “other side”.

Thirteen years after Hitler’s death, Adler, who obviously accepted Orff’s expressions of deep regret about his activities during the Nazi period, mounted the double bill (with Leontyne Price in the title role of “Die Kluge”). Palmer’s film surely heightens Adler’s obviously political 1958 repertory choice, inviting some of us to consider the intended significance of a long-forgotten act. 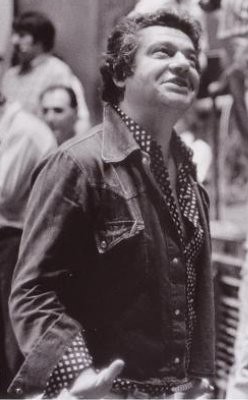 This website has already discussed the extraordinary network of European conductors and other artists who seemed to act as talent scouts for Adler to bring promising artists to the attention of the San Francisco audiences, and then the world. (See S. F. Opera “Bel Canto” in the Adler Years Part I (1954-1957))

Even so, it was an extraordinary act for San Francisco Opera, whose warehouses were full of production sets dating back to the 1920s, and who had up until then made relatively few investments in new productions, to commission a French youth in his mid-20s to design the sets for two productions. (Ponnelle’s work was so well-received that he was invited back for a second Adler project, designing the sets for the American premiere of Richard Strauss’ “Die Frau ohne Schatten” in 1959.)

[Below: a medieval celebration, under the signs of the Zodiac; one of Ponnelle’s sets for “Carmina Burana”; edited image of a photograph, courtesy of San Francisco Opera.] 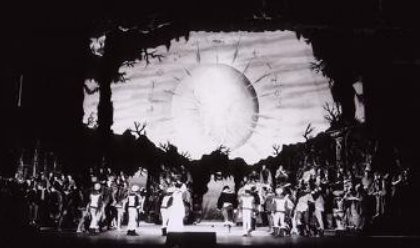 San Francisco became a crucible for Ponnelle’s growing talents. But after the Orff double bill and the “Frau” sets, Ponnelle’s early legacy was represented in San Francisco only by revivals of “Carmina” and “Frau” in the 1960s, until the 37 year old Ponnelle returned in 1969 in his re-invented persona as production designer and stage director.

In this essay, we will not attempt to divine the significance of Ponnelle’s great productions, nor to try to define his role in 20th century opera history. This is only the first in a series of pieces about Ponnelle, that will appear occasionally, and it is presented as a commemoration of his  role, 50 years ago, in bringing the music of Orff in a theatrical setting to San Francisco audiences. 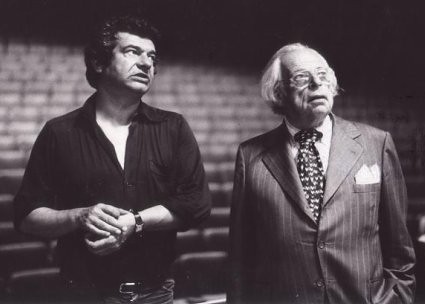 As we prepare this series on Ponnelle, we invite colleagues who worked with him in any capacity, or who have studied, or enjoyed his works, to contact us at [email protected] to participate with us in this celebration of his work and legacy.