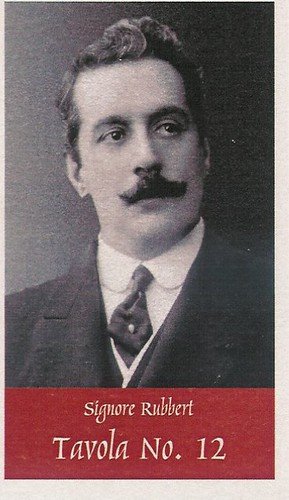 For months Opera Santa Barbara arranged a wonderful celebration of the 150th Birthday of the great Italian composer Giacomo Puccini in their gilded, opulent new operatic venue – The Granada Theatre. The celebration was to take place with superb wining, dining and Puccini’s great music, plus a very, very special guest – the composer’s granddaughter, Simonetta Puccini.

As all of us opera lovers know, Puccini, born in Lucca, Italy in December, 1858, gave the world many of its most popular and cherished operas, including Madama Butterfly, La Boheme, Turandot, Tosca, The Girl of the Golden West, and Manon Lescaut.

[Below: an invitation to the Opera Santa Barbara’s fundraiser for The Granada Theater.] 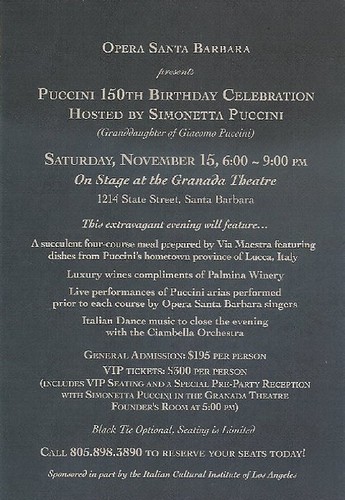 (Signora Puccini, in addition to being a blood descendent of the composer, is a celebrity in her own right, having engaged in a multi-million battle with the Puccini Foundation over the Maestro’s legacy. The Italian courts have found in her favor, and she now oversees a foundation that administers three of Giacomo’s historic villas.) 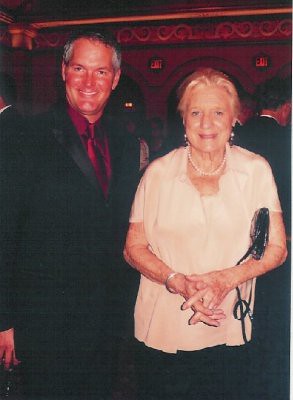 The evening was magnificent with wining and dining in the tradition of Italy’s lovely Lucca, Puccini’s hometown province. Chef Aurelio Barattini of Lucca’s 14th century institution, the L’Antica Locanda di Sesto restaurant, was flown in to supervise the meal catered by Santa Barbara’s Via Maestra Restaurant.

Madame Puccini was heartily toasted by all (including some of Santa Barbara County’s extraordinary wines).

[Below: Giacomo Puccini’s photograph on a card directing a guest to his table.] 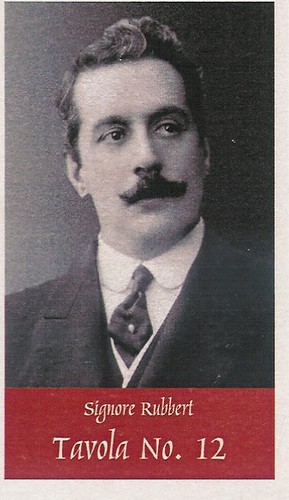 But the very grand feast – in the cuisine of Lucca – featured each course being preceeded by singers from Opera Santa Barbara doing choice Puccini arias. Opulent tables (see below) were located on the theater’s stage so that patrons could imbibe the newly restored grandeur of the Granada.

[Below: the table settings for the Opera Santa Barbara Dinner that took place on the Granada Theater stage.] 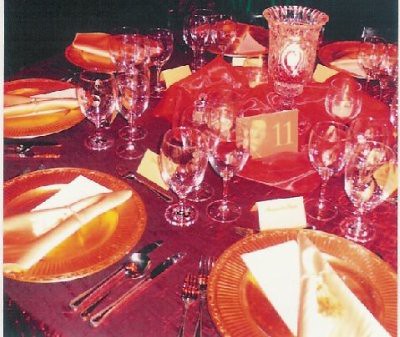 The singers were Sopranos Michele Bogdanovitz, Jamie Chamberlin and tenor Edgar Ramirez, all ably accompanied by pianist Gerald Sternbach – starting off the evening with O mio babbino caro from “Gianni Schicchi” (which Los Angeles Opera just presented as one of three Puccini operas in “Il Trittico”) and ending with tenor Ramirez doing a fine Nessun dorma from “Turandot”  – the vehicle Luciano Pavarotti made his own!

And what piece would you have selected to preceed the roasted Wild Boar? I would have selected that final line by Tosca after she has done-in the evil police-boss Baron Scarpia who had been tormenting her — over his dead body, flicking her teeth Italian style, she snarls “Avanti lui tremava tutta Roma (Before him trembled all Rome)”. Enter: the roasted wild boar on the tray complete with red apple in the mouth!

[Below: Simonetta Puccini, seated next to Italy’s consul general Nicola Faganello (partially hidden) displays a photograph of her grandfather.] 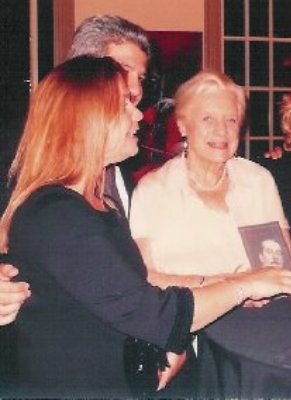 With supremely hideous irony, Wagner’s musical legacy was not about to be upstaged – the final opera of his colossal four-opera Ring – Goetterdaemmerung – ends with the “Immolation”, as the great castle Valhalla is torched and burns furiously as Bruennhilde rides her horse Grane into the flames as the towers and walls of Valhalla come crashing down.

Without a doubt, one of the most overwhelmingly dramatic scenes in all of opera was tragically replicated on the very weekend of this celebration, as the cities of Montecito and Santa Barbara were engulfed by a veritable, truly Wagnerian-scale Immolation.

The firestorm left some of America’s grandest mansions into smoking ruins – their occupants had to run for their lives, with more than 200 homes reduced to ashes. Many of Westmont College’s buildings were burned and very sadly, the lovely Mt Calvary Monastery and Retreat, as pictured here in the Santa Barbara News Press’ tearfully dramatic photo, shown below, was totally destroyed.

[Below: a scene of destruction at the Mount Calvary Monastery and Retreat; edited image, of a photograph from the Santa Barbara News Press.] 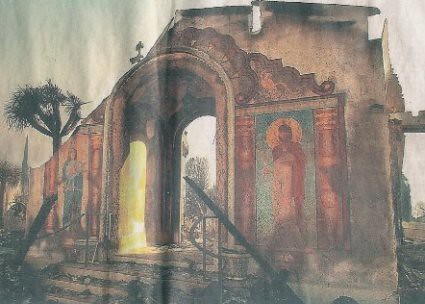 As if the economy’s Goetterdaemmerung was not enough torment!

For those thousands affected, it was Santa Barbara’s equivalent of the horrendous fire bombing of Dresden in February 1945 which left their famed and beloved Frauenkirche in smoking ruins like Mt Calvary. Even so, Dresden rose from those ashes into a restored baroque gem.

But Puccini’s 150th Birthday Event went on – as it should have – for Santa Barbara surely will recover like the legendary Phoenix from these horrific flames, and Puccini’s divine music will sustain all of us and – in time – will erase the sorrows, misery and loss.

A personal note: I’ve attended many wonderful operatic celebratory party-events over a great many years. This was, beyond doubt, the most unforgetably sensational!

Note from Tom and William on Future operawarhorses.com features:

In addition, we are planning a series on operatic production designer Jean-Pierre Ponnelle, that will launch an ongoing feature on the collected work of several major set and production designers. We invite anyone with personal experience with Ponnelle and his productions, including information on those productions that are still in existence, to write us at [email protected].

You may use that e-mail address to communicate with us on any other operatic subject as well, including our invitation for persons to describe “superlative” performances. If you agree or disagree with any of our postings, please use the e-mail for that purpose also.