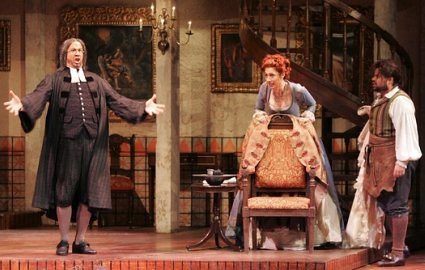 Tragically, the descent of the final curtain of “Barber’s” last performance proved to be the abrupt, unscheduled finale of Opera Pacific’s 2008 -2009 Season. Opera Pacific canceled the much anticipated Ricky Ian Gordon operatic setting of John Steinbeck’s novel, “The Grapes of Wrath” and Deborah Voigt doing the ravishing title role in Richard Strauss’ “Salome”.

The economic meltdown has created an artistic Götterdämmerung in America, indeed the world. It is taking a terrible toll in the world of classical music. My fear is that we’re just seeing the beginning of an operatic meltdown as funds disappear.

We all know that the ticket price is just a small fraction of the budget of every opera company, and that the overwhelming majority of the funds must come from elsewhere, but those “from elsewhere” funds have disappeared as the economy descends into what appears to be a deepening recession, which I believe will be matched by an even deeper recession in the operatic world everywhere.

Baltimore Opera has just cancelled the remainder of its 2008-09 season (and has declared bankruptcy and does not plan to refund the unused portions of subscriptions). The Washington National Opera is postponing completion of the “Götterdämmerung” in the American Ring, co-produced with San Francisco Opera, and has abandoned plans to present the four Wagner operas together as non-subscription “Ring series”.  The Metropolitan Opera has axed next season’s revival of Corigliano’s “The Ghosts of Versailles”. Stay tuned – there may be much more bad news in store, sorry to say.

Is there an operatic general director out there not rolling over and over in sleepless nights? Which productions will get the hatchet? Further production cuts appear inevitable. Every major (let alone minor) opera company in the world will feel the impact of the economic downturn. Other opera companies may disappear forever to the tragic loss to the world of opera – and the careers of those anxious young singers who had hoped desperately to grace soon-to-be empty opera stages.

Opera Pacific went out with a flourish with Rossini’s screamingly funny comedy “The Barber of Seville” (seen October 30, 2008) which should have been renamed “Il Ritorno di Don Basilio” in light of a stellar comedic appearance of Dean Peterson as the malevolent music-teacher, bringing down the house in side-splitting laughter. 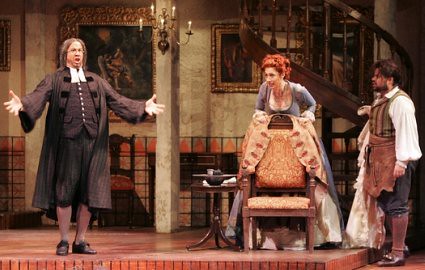 Michael Gallup was the corpulent, flatulent Doctor Bartolo. He was nothing short of sensational in his acting and especially facial gesticulations (as usual) in this vaudeville-rank romp. The production used a unitary, revolving (and extremely effective) set from Canadian Opera.

Our Figaro was played spectacularly by the young and very promising Jeremy Kelly, and our Rosina was a true commedienne, rising star Jennifer Rivera. 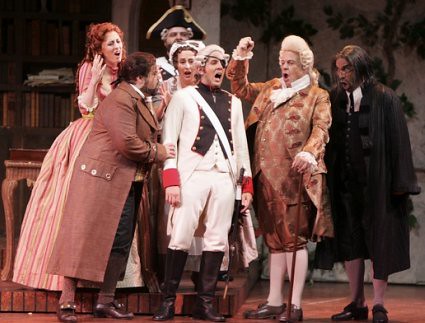 Few in the standing-ovation audience had a clue anything was wrong, but some of us long-term subscribers suspected all was not well. We had been receiving a growing crescendo of calls from Opera Pacific urgently seeking more donations. Over the years Opera Pacific had presented many spectacular productions covering the gamut of opera from the most contemporary and controversial (like Heggie’s “Dead Man Walking”) to sublime grande opera (like Verdi’s “Aida”). Your website host William and I have reviewed several of Opera Pacific’s performances on this website, and both of us will sorely miss this huge asset to California’s operatic landscape.
Hopefully, when and as the economy recovers, Opera Pacific can emerge out of the dark gloom, and can morph into a perhaps slimmer, but exciting new operatic experience. All of us must help the companies that still survive in whatever way we can. Opera is the ultimate performing art [and therefore the most expensive].  Without all of us who appreciate live opera performance doing whatever we can to help companies secure the funds they require, a huge sucking sound (to paraphrase H. Ross Perot) in the world of opera will be heard worldwide.