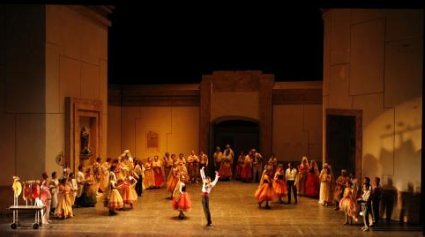 Bizet’s “Carmen”, presented in 1999 Emilio Sagi’s production designed for the Teatro Real of Madrid, was revived by the Los Angeles Opera in mid-November. December 6th introduced a second cast, with responsibility for three of the opera’s performances. The evening was the occasion for the Los Angeles debuts of three major artists. 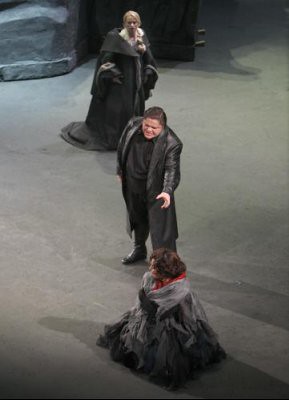 The Carmen was Canary Islands mezzo soprano Nancy Fabiola Herrera, in her debut role with the Los Angeles Opera, although she has appeared in important mezzo roles at major international opera houses, and had made a DVD of Torroba’s zarzuela Luisa Fernanda, in which Placido Domingo starred. Herrera was a rich-voiced Carmen, and effective actress, defining sultriness both vocally and histrionically.

The Micaela was Slovenian soprano Sabina Cvilak, who had successfully sung Mimi in Puccini’s “La Boheme” at Washington National Opera in 2007. Her third act aria was resplendent, revealing an important soprano voice. The Jesus del Pozo costume she wore seemed an unwise choice for the trek through the mountains to the smuggler’s camp, but Cvilak’s physical attractiveness showed through it.

[Below: Micaela (Sabina Cvilak) wearing Jesus del Pozo outerwear for her climb to the smuggler’s camp; edited image, based on a Robert Millard photograph, courtesy of Los Angeles Opera.] 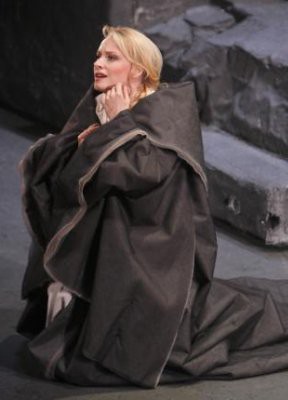 Another del Pozo costume was a momentary distraction from the triumphant debut of Diego Torre as Don Jose.  Stepping into a role originally designated for Spanish tenor German Villar, Torre, who is physically quite stocky, had to wear a first act soldier’s costume, whose contrasting white trousers and dark jacket resulted in a swath of white across Torre’s midriff, that was extraordinarily unflattering.

When the second act bugles beckon soldiers back to their barracks, the part of Don Jose shifts from the mild-mannered lyrical tenor introduced to us in Act I to perhaps the greatest of French dramatic tenor roles. And from the “Flower Song” on, Torre was captivating, with a voice of great power, flexibility and fluidity. His acting, for a man of size, was remarkably agile, including a credible knife-fight with Raymond Aceto’s Escamillo. (For the record, Torre’s third act costume was much more becoming.)

The audience, generally aware that this was, in effect, his first performance before the regular audience of a major opera company (he had performed the role in a student matinee earlier in the week) responded enthusiastically and with justification. 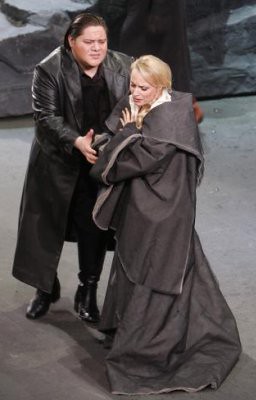 The Escamillo for both L. A. Opera casts was basso Raymond Aceto. Although it is rarer to hear a basso perform Escamillo than a baritone, the role is within the range of a basso cantante with a secure “F” above Middle “C”, and Aceto has been associated with the role for many years. Although the performance was praiseworthy, Aceto’s future lies in the basso roles of French and Italian opera, where he is often an astounding presence.

[Below: Escamillo (Raymond Aceto) sings the Toreador Song in Act II of “Carmen”; edited image, based on a Robert Millard photograph, courtesy of Los Angeles Opera.] 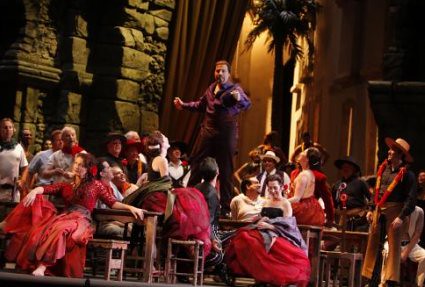 The set designs are those of Gerardo Trotti, whose professional work is principally produced for various opera houses and other theaters in Spain, including Madrid’s principal zarzuela companies. The production’s costume designer, as noted above, was Jesus del Pozo, the celebrated Spanish creator of avant-garde women’s outerwear and lingerie, jewelry and perfumes.

Trotti’s conceptualization of Carmen’s Seville and its surrounding mountains, seems to have a unified structure, although the scenic design for each of the four acts has a distinctive feature. The first and fourth are realistic views – the first, a Seville street with sufficient depth for both soldiers in formation and tobacco workers to disappear into the crowds and for children to play with hoops and form their own regiment of child soldiers; the final act, the exterior of the bullring and an auxiliary building with a plaza large enough to permit some choreographed flamenco dancing.

[Below: Trotti’s Act I sets for “Carmen”; edited image, based on a Robert Millard photograph, courtesy of Los Angeles Opera.] 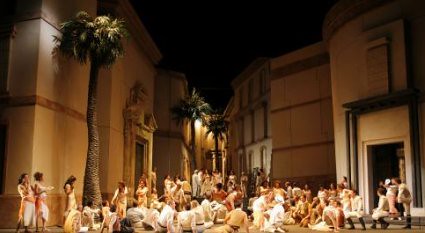 The sets for the second and third acts mix a realistic setting with a surreal image from one or more other acts.  (One glimpsed the Seville street beyond the ancient ruins in which Lillas Pastia had established his tavern. More improbably, in the smuggler’s hideaway high in the mountains, the mountain edges touched the walls of the bullring and pieces of the Act I street scene.)

[Below: Trotti’s Act IV set of the plaza outside the bullring; edited image, based on a Robert Millard photograph, courtesy of Los Angeles Opera.] 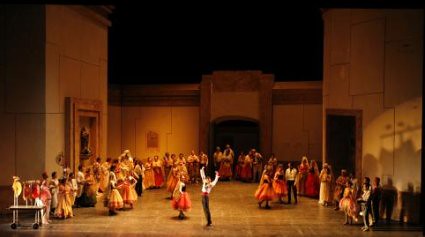 Ultimately, the success of the evening was from the three debut artists – Herrera, Torre, and Cvilak.

Mexican-born Torre is in his second year as a Los Angeles Opera Domingo-Thornton Young Artist. His success exemplifies the fact that when a young singer covers the role of another artist, he or she may get the opportunity to demonstrate their ability to handle principal roles at a major opera company. Torre demonstrated that he has the voice able to assay the dramatic and heroic roles of French opera. 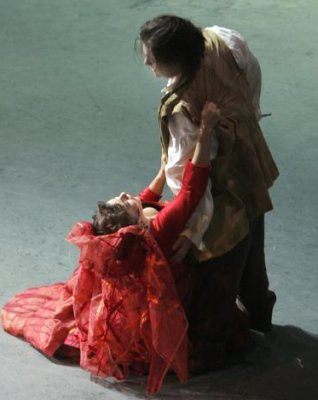