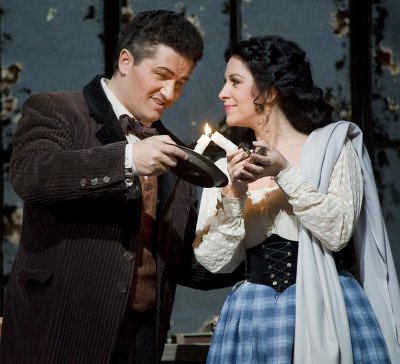 One might argue that the San Francisco Opera from its founding has been a house that seems dedicated to Puccini’s works, but that happens to do a great job of other parts of the operatic repertoire, as well.  The outgoing musical director, Donald Runnicles, is associated with Wagnerian and contemporary opera, but also excelled with Puccini.

Runnicles’ successor in San Francisco, Italian conductor Nicola Luisotti, will assume his post for the upcoming 2009-2010 season, but is in San Francisco as guest conductor for the first eight of ten performances of the most popular of all Italian operas, Puccini’s “La Boheme”.

Michael Yeargan’s Fall 1995 production was originally developed for the season that the opera company performed in the Bill Graham Auditorium, when the War Memorial Opera House was closed for earthquake repair. It was constructed, with the practicality one expects from the famously utilitarian Yeargan sets, to fit the War Memorial stage as well. Harry Silverstein was the Stage Director.

There is much to praise about the performance. However, there is one element about an opera conducted by Luisotti worth giving special attention, and that is the conducting of Luisotti. Generally, conducting at San Francisco Opera is first rate. The orchestra is experienced and professional and the great singers of the day are engaged. Inexpert conductors would not be engaged. And, since so much of the conducting duty, including both the summer and fall seasons of 2008, has been the responsibility of Donald Runnicles, more often than not the conducting has been world class.

Yet, there is something about Luisotti on the podium that is quite different from other excellent conductors. First of all, his conducting is so physical that it makes “vigorous” seem too tame an adjective. He extends his arms to full length, as if he were the champion among drum majors in a national contest.

He bends forward to signal to the violas that he wants their melody to dominate, while simultaneously gesturing to the French horns to soften their sound and cueing the woodwinds that their entrance will take place on the next beat. He is constantly in motion. One imagines that there could be a split-screen DVD of “Boheme” that showed the singers onstage and Luisotti in the pit, and one’s eyes would constantly fix upon what Luisotti is doing at any given moment.

Beyond his physicality, he exudes graciousness with his orchestra. Before he leaves at each intermission, he shows great emotion towards the orchestra as a whole and, especially those chairs or sections who have had a major part in the act just completed.

At the end of the opera, when most conductors are on their way backstage awaiting for the leading lady to invite them onstage for applause, Luisotti has entered into a lovefest with all the sections of the orchestra. He does not leave the orchestra pit until he has wandered through lavishing praise upon and spreading joy among the orchestra members.

To understand Luisotti and his orchestra at the end of a performance of “Boheme”, think of an American football coach’s enthusiasm for his team just after winning the Super Bowl. Fortunately, “Boheme” is a short enough opera that management need not worry about orchestra overtime, even if Luisotti took the time to kiss each orchestra member on both cheeks.

San Francisco had first seen Luisotti in 2005, when, instead of Puccini’s “Fanciulla del West” that he had announced on his website, he drew the assignment of San Francisco Opera’s extremely odd new production of Verdi’s “Forza del Destino”.

Even so, he obviously impressed the San Francisco Opera Orchestra who were demonstrative of his conducting in the ways they had been in past seasons of his fellow Italians Nello Santi and Maurizio Arena. (See Zurich and San Francisco: A Tale of Two “Forzas”.) This is his first engagement in San Francisco in three years, but that, of course, is scheduled to change next September. 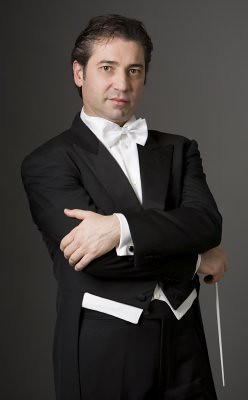 The Yeargan sets for the first and fourth acts are a cramped garret room, truly giving the sense of an extremely small space for four impoverished men. Silverstein’s direction for the shenanigans of the four roommates met the composer’s and librettist’s expectations. Gheorghiu was an affecting Mimi, and Beczala an ardent Rodolfo. 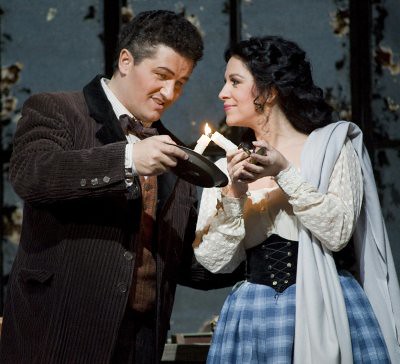 The transition from Act I to Act II (combined without an intermission) provided Yeargan with opportunities to use his imagination and theatrical skill. As Rodolfo sings O soave fanciulla the garret turns blue and the walls become translucent. Rodolfo and Mimi walk into the Paris street.

The Act I Bohemian’s garret sets are whisked away and replaced with a full-view of the buildings that surround the Cafe Momus.  The San Francisco Opera Chorus, for a moment in a freeze frame, soon become the energetic shoppers and elegantly dressed Parisians enjoying a new snowfall.

However, when Puccini wishes us to concentrate on the Momus table at which the Bohemians sit, next to the table of Musetta and Alcindoro, the exterior scene is transformed into the inside of the Cafe, so that we might savor the tension created from the smoldering love affair of Musetta (Norah Amsellem) and Marcello (Brian Mulligan).

[Below: Musetta (Norah Amsellem) exploits the affections of Alcindoro (Dale Travis); edited image, based on a photograph courtesy of the San Francisco Opera.] 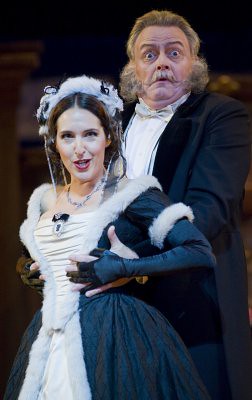 But after Musetta’s famous second act showstopper, and her exploitation of Alcindoro, the opera’s focus shifts to what is going on back in the street, and Yeargan magic occurs yet again, the cafe’s inside yielding to the exterior scene of a military parade, with tricolors flying everywhere.

[Below: Michael Yeargan’s sets for the second act of “La Boheme”; edited image, based on a Terrence McCarthy photograph, courtesy of San Francisco Opera.] 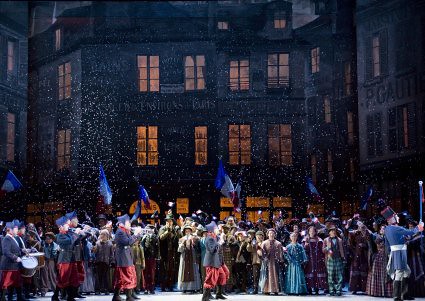 Although the most famous parts of the opera occur in the other acts, my personal favorite is the third act, in which Puccini’s melodic gifts are at their most expansive in the duets between Mimi and Marcello, followed by Mimi’s aria and her duet with Rodolfo.

[Below: Angela Gheorghiu as Mimi in Act III; edited image, based on a Terrence McCarthy photograph, courtesy of San Francisco Opera.] 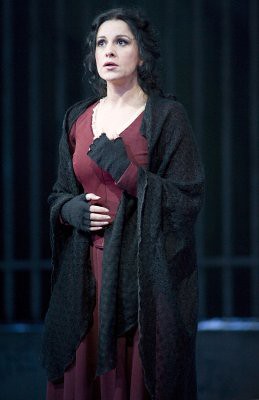 Gheorghiu and Mulligan, then Gheorghiu and Beczala, again proved that Puccini’s music, sung by great artists, is as effective as any art form, for expressing the emotions of passionate love, jealousy and fear of mortality.

[Below: The Yeargan sets for Act III, in which Mimi (Angela Gheorghiu) and Rodolfo (Piotr Beczala) decide not to part until spring; edited image, based on a Terrence McCarthy photograph, courtesy of San Francisco Opera.] 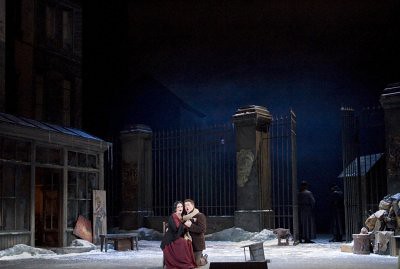 The month of November 2008 was a brutal one for the world’s economies. For the expensive world of operatic performance, its dependence on the economic health of the world’s great cultural centers was especially evident. In such stressful times, there was solace in San Francisco that the popular Gheorghiu had returned for Puccini, and for sold-out performances of “Boheme”.

San Francisco Opera under David Gockley has now presented to great success four of the Puccini canon of works (“Manon Lescaut”, “La Boheme”, “Madama Butterfly” and “La Rondine”) since his assumption of the General Directorship at the beginning of 2006. “Tosca” returns in the Summer, and performances of “Fanciulla del West” and “Il Trittico” are expected in the subsequent season. With Luisotti assuming the reins of the opera’s musical directorship, it augurs well for a vigorous Italian wing, and for San Francisco Opera as a whole.