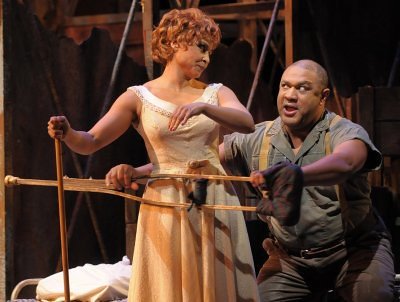 Chicago’s civic pride in the ascension of a hometown African-American family to the world stage has created intense interest in the most famous opera about an African-American community. Two weeks after President-Elect Barack Obama’s victory celebration at Chicago’s Grant Park, the Lyric Opera added Gershwin’s “Porgy and Bess” to its performance history.

The community interest in the opera was unprecedented, achieving the greatest ticket sales in the history of Lyric Opera, selling out most of the 13 scheduled performances before opening night. (A 14th performance has been added for Tuesday December 16th.)

Francesca Zambello’s production utilizes Peter J. Davison’s extraordinary unit set, which establishes Catfish Row as a weathered, rusting vertical community of multiple tenement floors. A spiral staircase at stage right leads to the second level. Four doors open to apartments at stage level, with a fifth, that houses Porgy, to the side.

A common area in front of the Catfish Row structure is furnished with tables, and, when the story line calls for it, is transformed into Robbins’ wake, or the community’s hurricane shelter. For the Kittiwah Island scene the entire set morphs into the ferryboat landing.

The title roles were performed respectively by Gordon Hawkins and Morenike Fadayomi, both in their Lyric Opera debuts, although both have sung these roles throughout the world. The other principal roles, Crown (Lester Lynch) and Sporting Life (Jermaine Smith) were  also Lyric Opera debuts by artists with international reputations for these roles.

[Below: Bess (Morenike Fadayomi) moves in with Porgy (Gordon Hawkins); edited image, based on a Dan Rest photograph courtesy of Lyric Opera of Chicago.] 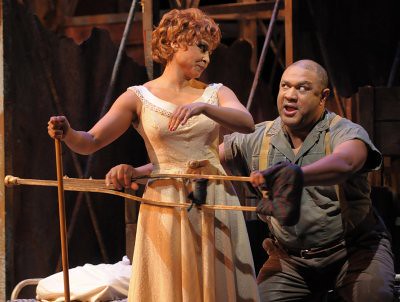 The conductor was John DeMain, who has been an effective champion of this work in its “operatic” form, utilizing the full orchestras and choruses of major opera houses, rather than the regrettably abridged and expurgated versions performed by orchestras utilized for “legitimate stage” musicals.

DeMain’s advocacy for the operas of Gershwin, Carlisle Floyd, Michael Tippett, and John Adams at Houston Grand Opera and elsewhere has proven invaluable to the cause of 20th century opera in the United States. (See: Opera Pacific’s Brilliant “Susannah” – May 14, 2008.)

I had previously seen the historic Houston Grand Opera production at the San Francisco Opera  in 1977, and John DeMain was responsible for its musical preparation for that production.  DeMain’s mastery of Gershwin’s rich orchestration and complex musical style is evident from the vigorous first notes of the overture.

(DeMain’s triumph in Chicago is tempered by the fact that his 11 seasons as artistic director at Opera Pacific in Orange County, California has ended with that company’s decision to close its doors permanently, due to economic conditions, partway into its current season. A review of Opera Pacific’s final operatic production, and a discussion of the company’s subsequent closure will be posted on this website soon.)

The opera’s first aria is the famous lullaby “Summertime” sung by Clara (Laquita Mitchell), one of the two women principals who will become widows by the end of the opera. Mitchell’s rich and vibrant soprano augurs well for her assumption of the lead role of Bess when this production is seen in San Francisco in June, 2009.

[Below: Laquita Mitchell sings the role of Clara; edited image, based on a Dan Rest photograph, courtesy of Lyric Opera of Chicago.] 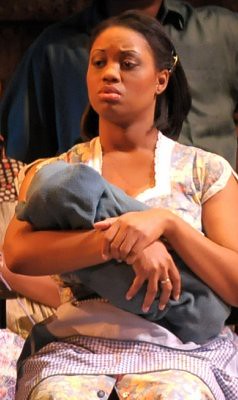 The chorus in this opera is at times the passive commentator on the events it is observing (as when it harmonizes with Clara’s “Summertime”), and at other times itself provides the “action”. That action may consist of the chorus members creating individualized characterizations of the Catfish Row folk who, for example, are participating in, cheering or deploring the game of craps.

At other times, in the style of musical comedy, choristers and principals often will move into a choreographed song and dance routine when it performs blockbuster ensembles such as that when Jake opines that “A Woman is a Sometime Thing”.

The second big male role in the opera is the violent Crown, who exploits Bess’ weaknesses and abuses her. Crown was played by Lester Lynch, who himself will take the role of Porgy for several of the Chicago performances.

Whenever Lynch was present on stage he was a mesmerizing presence, whether – wielding a cotton hook – engaged in a fight to the death with Robbins, or in the terrifying scene on Kittiwah Island that leads to his rape of Bess. By the time of his death at the hands of Porgy, we are prepared to believe that the gentle Porgy becoming Crown’s killer represents a higher justice. 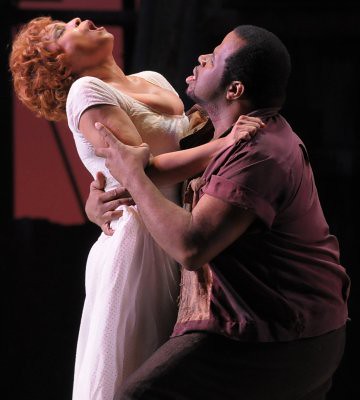 The god-fearing Serena Robbins was played impressively by Jonita Lattimore. Her character more than any in the opera has the religious fervor that embraces the spirit of a spiritual. Lattimore’s Serena was a spellbinding performance.

Clara’s husband, the fisherman Jake, was Eric Greene, in a role he will reprise in San Francisco (the only member of the opening night cast scheduled to sing the same role this Fall in Chicago and next summer at San Francisco Opera.)

[Below: Porgy (Gordon Hawkins) with Serena Robbins (Jonita Lattimore)  in the background; edited image, based on a Dan Rest photograph courtesy of Lyric Opera of Chicago.] 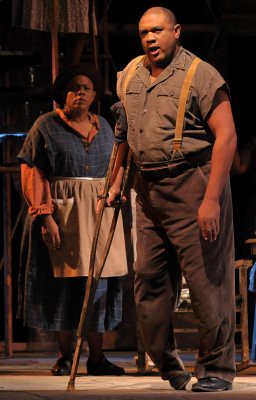 But I suspect that many in the audience were most impressed by the extraordinarily athletic performance of Jermain Smith as Sporting Life. Part gymnast, part dancer, clad in the extravagant clothes of a character who has no scruples about making money from pimping and selling cocaine, Smith was visually and vocally a knockout performer.

When we reflect on it, the always charming but insidious Sporting Life is arguably more destructive of an impoverished community than the violent Crown, but Gershwin gives him some great music to sing and Smith gave us a stunning performance.

[Below: Jermaine Smith is Sporting Life; edited image, based on a Dan Rest photograph courtesy of Lyric Opera of Chicago.] 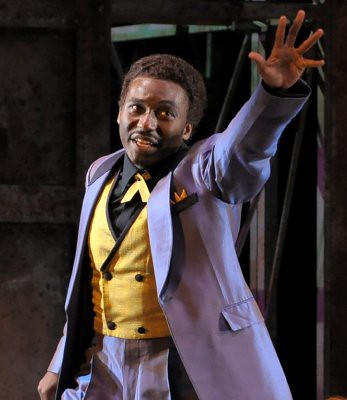 Zambello’s production provided many delights large and small. It is always theatrical, often incorporating the feel of a big budget Broadway show augmented by Lyric Opera’s superb orchestra and chorus.

Zambello is a master of the current fashion of rapid fire operatic scene changes.  With changes in lighting, a “living picture” freeze frame,  and the repositioning of characters and furnishings.  the Catfish Row structure merges into the scene in Serena’s living room raising money for Robbins’ funeral.  (My one regret is that these time-saving transformations apparently did not save enough time to retain Porgy’s “Buzzard Song”, but Zambello and DeMain may have had other reasons for that cut.)

Another memorable image is the scene of the hurricane shelter, with a swinging ceiling fan and windswept curtains as the terrified inhabitants of Catfish Row huddle together. Another highlight is when Serena assembles a team to call on Doctor Jesus to restore Bess to health.

“Porgy and Bess” will soon be 75 years old, and some may wonder why it has never been performed at the Lyric Opera of Chicago before. Perhaps there was too much to work through. There was the multi-decade debate as to whether it was a proper opera. The mid-1970s Houston Grand Opera production did much to argue for its incorporation into an opera company’s standard fare, and the Washington National production of 30 years later, to my mind, settles the matter once and for all.

There were other obvious issues that seemed important in the mid-20th century.  Neither Du Bose Heyward, the original creator of “Porgy”, nor the Gershwins were African-American, yet the music and lyrics purported to represent life in an African-American community. Thus, there was a highbrow debate about black music in opera that paralleled the “blue-eyed soul” controversies of rock and R&B music and later the legitimacy of the works of Eminem and other white rappers in the hip-hop community.

But it’s the 21st century now and times are changing. I think Zambello, DeMain, and the cast performing Gershwin’s masterpiece will agree that the past debates about “Porgy” should be put behind us. It is what it is. And it is, in the Zambello production, a hell of a good show!