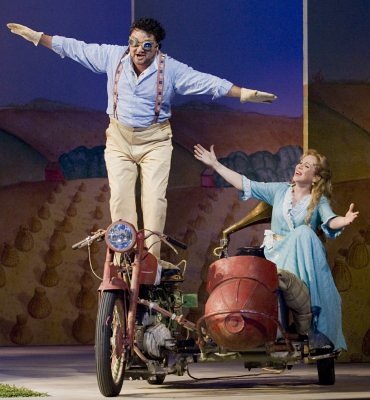 Until the late 1960s, San Francisco Opera paid scant attention to Donizetti’s great romantic comic opera, “L’Elisir d’Amore”, having had only three performances of the opera in San Francisco in the first 44 seasons of the company’s history.  (If this seems incredible for an international house led for its first 30 years by an Italian-born conductor, consider that until 1959, there was only a single performance in San Francisco Opera’s first 36 years of any work by Vincenzo Bellini.)

Since 1967, “L’Elisir” has had three new productions, and has provided a vehicle for such stars as Jose Carreras and Paolo Montarsolo (1975), and Ruth Ann Swenson (with Luis Lima and Dale Duesing in 1984 and Jerry Hadley and Simone Alaimo in 1992)

Although the previous productions sited the opera in a once upon a time rustic village in Italy, the current production time-shifted the story to California’s Napa Valley in 1917, just before the entrance of the United States into World War I.

Nemorino drives an ice cream truck (he appears to be an employee rather than an entrepreneur, because, in the final scene after he and Adina become aware of his inheritance, he seems to assume ownership of the ice cream business.) Adina begins the opera as a beauty queen, and Belcore is a recruiter for the U. S. Army. The charlatan Dulcamara is, well, the charlatan Dulcamara. 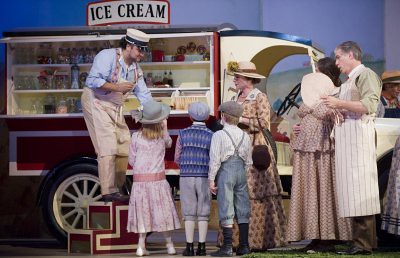 Much of opera that is time-shifted appears not only anachronistic but sappy, yet there is a universality to the story of “L’Elisir”, and it works here. In fact, the story probably would work in any setting in which you might assemble a lovesick youth, the coy object of his affections, a petty army official, a charlatan making outrageous health claims about his product, and gullible consumers.

Vargas is one of the reigning superstar lyric tenors, but has rarely appeared at San Francisco Opera, his only previous engagements being a round of Edgardos to Swenson’s Lucia in Donizetti’s “Lucia di Lammermoor” and two performances as Gustavo III in Verdi’s “Ballo in Maschera” in 1999.

Although Vargas has been engaged at the next higher category of vocal weight (see my review Vargas, Podles Brilliant in Puzzle Box “Ballo”: Houston – November 2, 2007), and has both recorded and performed Verdi tenor parts, he has kept Nemorino, a role particularly well suited to displaying the glories of the lyric tenor voice, in his active repertoire, and he also has sung other Donizetti roles in the recent past. 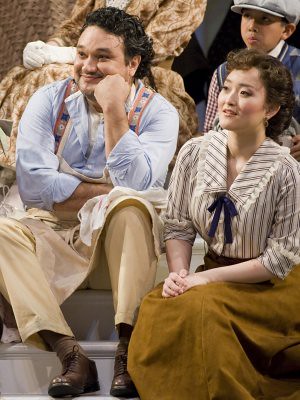 Vargas’ most illustrious predecessor as Nemorino in San Francisco, Pavarotti, performed the role at age 34, when he could be a vigorous actor, and, with his innate charm, an engaging comedian. Pavarotti was arguably the greatest lyric tenor of the 20th century. The vocal skills he employed in singing Donizetti are well documented.

Many San Francisco Opera veterans regard Pavarotti as the lead divo of the pantheon of extraordinary tenors (including Placido Domingo, Alfredo Kraus, Jose Carreras, Jon Vickers and Giacomo Aragall) that performed in San Francisco Opera’s Italian repertory from 1966 through 1981 – the latter half of Kurt Herbert Adler’s directorship. San Francisco was one of the cities graced with Pavarotti’s peerless performances of Donizetti roles: Edgardo in 1968 and 1972, Nemorino in 1969 and his role debut as Fernando in “La Favorita” in 1973.

It is a phenomenon of operatic history that every generation of operagoers contains substantial numbers of persons who think that the great performers whom they remember from their youth constituted a “golden age” in contrast to contemporary singers whom they think show evidence of a decline in artistic values.

As readers of this website have detected, even though I have had the rich experience of attending operatic performances of most of the greatest singers of the 1960s and 1970s in their prime, I find many comparable voices in contemporary operatic performances – sometimes (not always) in more interesting physical productions and more often than not as part of casts that are uniformly excellent. (See my extended remarks in my upcoming review of Donizetti’s “Lucrezia Borgia” at the Washington National Opera.)

Thus, I found it significant that more than one of the 2008 audience who had been audience members for Pavarotti S. F. performances in 1969, greeted me with their perceptions that attending a Vargas “L’Elisir” performance caused them to recall Pavarotti on stage.

Every one of the S. F. Nemorinos I have seen has radiated an immensely likeable persona. Yet, I believe that there were good reasons for thinking of Pavarotti, when hearing and seeing Vargas on stage, even though each of these tenors’ voices is distinctive and unique. Obviously, in each of these performances 39 seasons apart, the audience was hearing a lyric voice of great artistry at the tenor’s prime. But I think it was the combination of that attribute with each tenor’s self-effacing good humor and joyous exuberance that caused such memories to bob up.

A performance of Vargas’ caliber deserves colleagues who are equally adept at their roles. Albanian soprano Inva Mula, in her San Francisco Opera debut season, was an enchanting Adina. She showed superb vocal control, enhanced by an ability to produce the part’s demanding coloratura effortlessly. 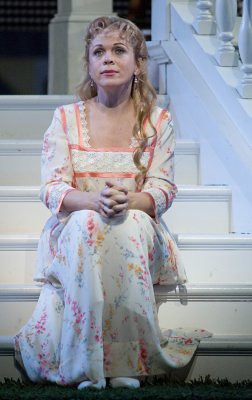 Giorgio Caoduro, also in his San Francisco Opera debut season, was a hilarious Belcore. Looking smart in his army sergeant’s uniform, he seemed to meet the character’s physical description of himself as an incomparable specimen of manhood.

One of the running gags of this production is the appearance from the opera’s first scenes of a group of eight football players, clad in the ancient football uniforms that call to mind college photos of Knut Rockne or former U. S. President Gerald Ford ready for the Big Game. Caoduro’s Belcore immediately attracted the Napa footballers. In synchronization with Donizetti’s music, he repetitively drilled them in fake plays, and was rewarded for his attention by enlistments from the group of them. 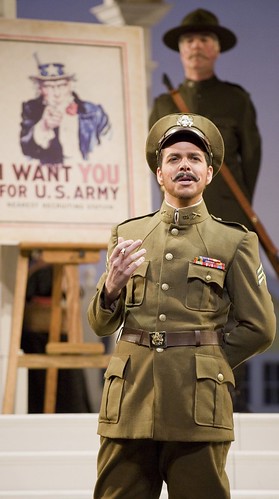 In my remarks on San Francisco Opera’s Family Matinee “L’Elisir”, I suggested that it was possible for a Belcore to steal the show, as I believe that Eugene Brancoveanu indeed did (see: Family Matinee “Elixir of Love” at S. F. Opera – November 8, 2008).

However, “L’Elisir” has two delicious comedy parts, and Alessandro Corbelli, the third principal in his San Francisco Opera debut season, did what it takes to make a successful Dulcamara – mix Donizetti’s tongue-twisting patter songs with the gesticulations, deadpan reactions, double takes and other practices that were the stock in trade of vaudeville comedians. Of course, the audience realizes that the joke is on Dulcamara, as he begins to believe that his patent medicine actually does have an effect. (That does not prevent him from upping the ante on the extravagance of his claims for it.)

[Below: Alessandro Corbelli is Doctor Dulcamara; edited image, based on a Terrence McCarthy photograph, courtesy of the San Francisco Opera.] 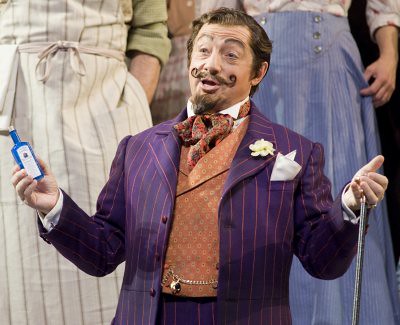 The ice cream that Nemorino sells clearly is comfort food, which he eats and shares with others. The audience watched as he peeled bananas, incorporating them into an ice cream sundae complete with whipped cream and maraschino cherry, which he ate before our eyes, without missing a note of his music. At one point Adina pretends to be suicidal, performing mock hara kiri with the ice cream scoop. When we see Adina and Nemorino sharing the ice cream truck goodies, we are reasonably certain that she will not really give this up to become Belcore’s army wife.

Perhaps Robinson saw the Opera National de Paris’ production photos of Paul Groves and Desiree Rancatore on motorized bicycles in the Laurent Pelly production of “L’Elisir” (see Hayseed Hilarity: The Pelly “L’Elisir” in Paris – September 16, 2007.) San Francisco’s Nemorino and Adina at one point position themselves (for no particularly evident reason) on Doctor Dulcamara’s motorcycle and side car, yielding the publicity photograph seen below. 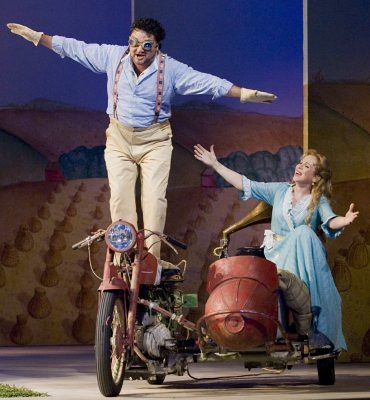 The new production was the first unambiguously successful production for San Francisco Opera by Allen Moyer. One of his previous efforts, Thomson’s “The Mother of us All” proved very controversial, and an unfortunate choice for opening night of the 2002 Fall season. 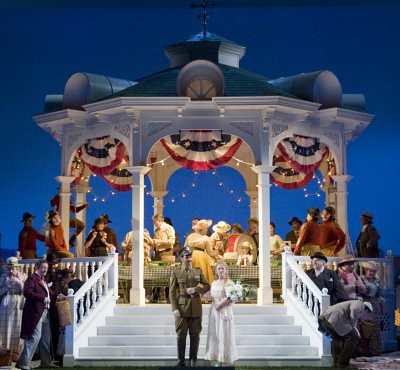 As noted in my review of his second effort, the November 2005 production of Bellini’s “Norma” was not just controversial – it was universally condemned (amazingly even by then San Francisco Opera General Director Pamela Rosenberg) – looking like the lathe section of a Home Depot lumber yard.

Fortunately, the “L’Elisir d’Amore” production, in which Nemorino ultimately becomes the most happy fella in the whole Napa Valley, was so attractive and enjoyable as to wipe the slate clean of the set designer’s previous misfires in San Francisco. Ultimately, I believe, the sets seen in San Francisco that should prove an enduring contribution to the popularity of live performances of “L’Elisir” in the United States.

[Below: the production’s finale – Belcore and his Army recruits learn that the United States has entered World War I; edited image, based on a Terrence McCarthy photograph, courtesy of San Francisco Opera.] 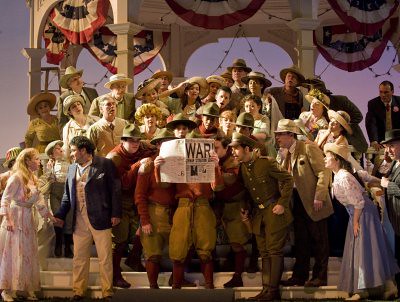 With a bumper crop of Donizetti singers currently available, one can expect memorable future performances on these sets, even as one savors what a wonderful treat San Franciscans experienced in Fall, 2008.