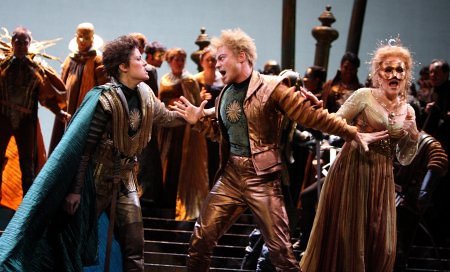 This is the third post in an ongoing quest for productions of the operas of Gaetano Donizetti that has taken me to Donizetti’s home town of Bergamo in Lombardy for background, and, for performances, to Paris (for Laurent Pelly’s production of “L’Elixir d’Amour”) to Zurich (for “Don Pasquale”), to Houston (for “Fille du Regiment”), to San Diego (for “Maria Stuarda”) and to San Francisco (for “Lucia di Lammermoor”).

There was even a side trip to Pittsburgh to enjoy an early success (“I Capuleti e i Montecchi”) of the person who regarded himself as Donizetti’s rival – Vincenzo Bellini.  Below is a list of recently attended or upcoming productions of Donizetti operas for which I will be posting reviews.

This new production is a collaboration between Opera Colorado (Denver), Boston Lyric Opera, Pittsburgh Opera, Fort Worth Opera and Michigan Opera Theatre (Detroit), and has already been seen in some of the collaborating cities. James Robinson is director, Allen Moyer Set Designer and Martin Pakiedinaz is Costume Designer. 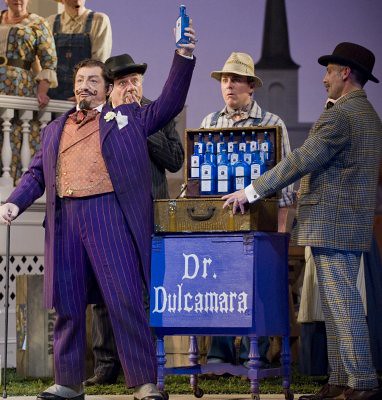 The production provides an opportunity for Ramon Vargas to appear in San Francisco for the first time in almost a decade in one of his signature roles, Nemorino, and for three S. F. Opera debuts: Inva Mula (Adina), Giorgio Caoduro (Belcore) and Alessandro Corbelli (Dulcamara). Bruno Campanella conducts.

It is doubtful that had Giuseppe Verdi not been a devotee of this opera, that his “Rigoletto”, another opera about Renaissance Italy that was strongly influenced by Donizetti’s work, would sound the way it does.

Renee Fleming (November 1, 5, 9 and 11) and Sondra Radvanovsky (November 7, 15, 17) split the responsibility for the title role character in this opera whose popularity surged in the 1970s as a vehicle for Sills, Sutherland, Caballe and Gencer. 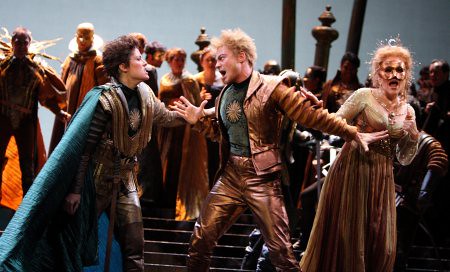 Vittorio Grigolo takes on the role of Gennaro, Ruggero Raimondi is Don Alfonso and Kate Aldrich is assigned the plum role of Maffio Orsini, and with that assignment, a famous show-stopping aria.

Placido Domingo conducts. John Pascoe is stage director and production designer. That this is a new production with stellar casts and Domingo’s personal sponsorship, suggests that this fascinating opera will have a new lease on life in the United States.

The Elixir of Love (Donizetti) for Families; San Francisco Opera, November 8 and 15, 2008

San Francisco Opera General Director David Gockley has transformed the “student matinee” into a “family matinee” in which children and the adults who accompany them are invited to explore a full-scale operatic performance in the beautiful War Memorial Opera House. The greatest of early 19th century Italian romantic comedy operas is presented in English (with English supertitles), with the principal cast selected among current and recent Adler Fellows, and with the always impressive San Francisco Opera Orchestra and Chorus.

Ji Young Yang is Adina; Alek Shrader is Nemorino.  Eugene Brancoveanu, a favorite of this website, is the Belcore, and Dale Travis is Doctor Dulcamara. Italian Conductor Giuseppe Finzi, who will share “La Boheme” with Music Director-Designate Nicola Luisotti, is at the podium.

Like “Maria Stuarda” a docu-opera about Elizabeth I’s court – this one about the Earl of Leicester’s stepson and protege, Robert Devereux, the Earl of Essex.  That Devereux’s intrigues led to his beheading, while Leicester did all the things he did and died a natural death, makes one appreciate how skilful Leicester was at reading the Virgin Queen.

[Below: Stephen Costello as Roberto Devereux and Hasmik Papian as Elisabetta; based on a Karen Almond photograph, courtesy of Dallas Opera.] 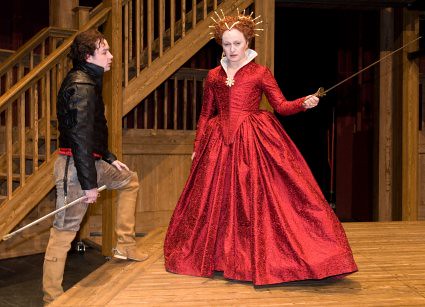 The Dallas production will star Hasmik Papian as Elisabetta, Stephen Costello as Roberto, and David Kempster as Nottingham. The team of Benoit Dugardyn (sets) and Stephen Lawless (direction), who produced Donizetti’s “Maria Stuarda” for Dallas in January 2007, return for this production.  (A review of the Lawless-Dugardyn production of Verdi’s “Il Trovatore”, seen at San Diego Opera in April 2007, may be found on this website.)

Santa Fe Opera will not have performed this staple of the Italian repertory for 41 years, but next summer creates a new production for three of the alumni of the Santa Fe Opera with successful international careers – Dimitri Pittas (Nemorino), Jennifer Black (Adina) and Patrick Carfizzi (Belcore). John Del Carlo makes his company debut as Doctor Dulcamara. 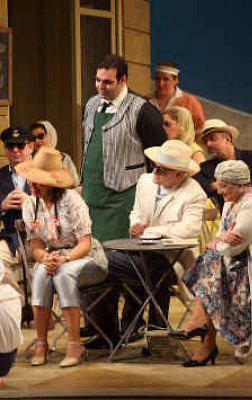 Debuting Jerry Zaks will be the stage director and Thomas Lynch the scenic designer. Corrado Rovaris will conduct.