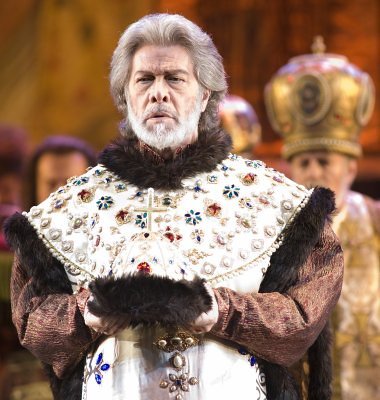 The 1869 version of Mussorgsky’s opera, loosely based on the reign of Boris Godunov, a younger contemporary of Queen Elizabeth I of England, has had three different productions shown in California in the past two years. When Russia’s Mariinsky Theatre came to Orange County in 2006, it was presented as a one act opera. Three months later (January 2007) it was done at San Diego Opera as a vehicle for Ferruccio Furlanetto.

The 2004 Geneva production was repeated in Lyric Opera of Chicago (1995) and at Houston Grand Opera (1997), always for Ramey. Houston eventually secured ownership of the production and revived it for Ramey again in 2006, with Julia Pevzner assuming the duties of Stage Director.

Wassberg, who later worked with legendary film director Ingmar Bergman, created a unit set that appeared to be a wooden wall towards the back of the stage that curved at the bottom towards the audience, as if are mid-stern on the decks of a large wooden sailing vessel.

The wooden wall sometimes appears to be solid, but at other times is honeycombed with large and small openings, that can be windows, doors, or larger gateways. The most spectacular use of the sets is for Boris’ coronation scene, when a gateway in the wall opens for a religious procession preceding the entrance of Tsar Boris, the tsarevich Fyodor and tsarevna Xenia.

[Below: the coronation scene from “Boris Godunov”; edited image, based on Terrence McCarthy photograph, courtesy of San Francisco Opera.]

Although it represented Ramey’s first appearance at San Francisco Opera as Boris in any version, the series of San Francisco performances likely represents his farewell to the role of Russian tsar. (Ramey has stated that no Boris performances are scheduled for him over the next few years, his contracted future engagements taking him past his 70th birthday.) 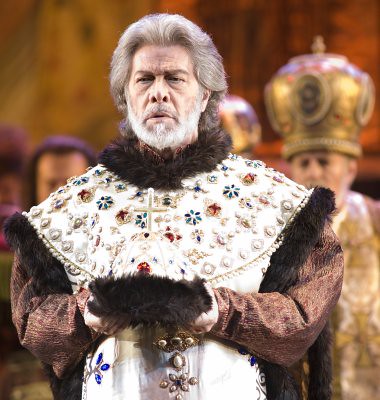 Ramey frankly admits that his voice at the present time lacks much of the flexibility of the past. Indeed, I did expect and was conscious of the spread in his vibrato, especially evident in the first act. Such a spread is evidence of his struggle in recent years to maintain a smooth legato line in performance. (See my review of his 2007 Mephistopheles at Houston Grand Opera: A “Faust” Surprise in Houston – January 23, 2007.)

A Star as Tsar

What was pleasing and perhaps unexpected was Ramey’s resourcefulness in projecting a fully articulated portrait of the troubled tsar. A person seeing the Ramey for the first time will recognize him as a superstar basso – an insightful actor with a deeply resonant voice, that by the second act was very much under Ramey’s control.

However, those wishing to hear a youthful basso cantante singing Mussorgsky were treated to the Pimen of Vitalij Kowaljow. He is one of several excellent bassos (certainly including Raymond Aceto, Luca Pisaroni and Hoa Jiang Tian) whose stars, this website has observed, are in their ascendancy. Kowaljow – whose performances as Pimen at the San Diego Opera (2007) and Jacopo Fiesco in Verdi’s “Simon Boccanegra” earlier this season were both reviewed here – displayed a rich, sonorous bass as Pimen.

[Below: Pimen (Vitalij Kowaljow) proselytizes the monk Grigori Otepyev (Vsevolod Grivnov) as part of Pimen’s campaign to expose the misdeeds of the tsar; edited image, based on Terrence McCarthy photograph, courtesy of San Francisco Opera.] 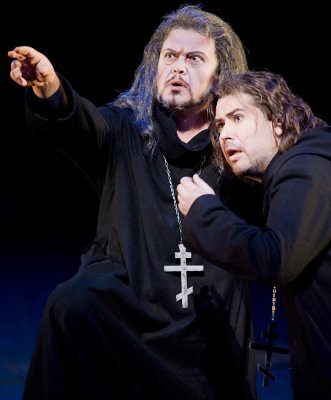 In fact, in the second act scene in which Prince Shiusky (John Uhlenhopp) brings Pimen to Boris to relate the story of the monk Grigori’s mischievous decision to topple the Tsar, one had the sense of the passing of the torch from one of the most impressive operatic bassos of the past 35 years to a leading member of a new generation.

If the parts of Ramey and Kowaljow constitute a major part of the seven-scene version, there is yet a third major basso role – that of the often intoxicated priest Varlaam (Vladimir Ognovenko) .Varlaam has only a single scene in the 1869 version, the scene at the inn near the Lithuanian border.

Ognovenko worked with Ramey in Chicago in 1995. Another alumnus of the 1995 Chicago production was its Innkeeper (Catherine Cook), a former San Francisco Opera Adler fellow, who has become a specialist in the character mezzo roles.For reasons not entirely clear to me, the innkeeper’s part, in both the 1869 productions at San Diego Opera (2007) and the current one, pluck the Innkeeper’s duck-plucking ditty from the 1872 version, and add it inauthentically to the 1869 version. (Is there a guild of character mezzos that has decreed that feathers will fly if any member accepts the part of the 1869 version of the Innkeeper without having the duck-plucking aria inserted into it?)

[Below: Varlaam (Vladirmir Ognovenko) chats up the hostess of an inn near the Lithuanian border (Catherine Cook); edited image, based on a Terrence McCarthy photograph, courtesy of San Francisco Opera.] 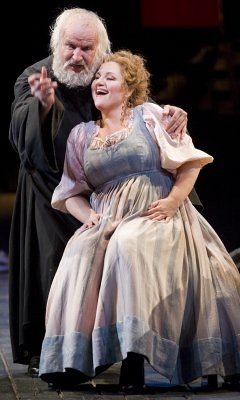 The two principal tenor roles were performed effectively. Vsevolod Grivnov was the Grigori, the monk who would be tsar. He had the requisite power to make a good impression in the two scenes in which the False Dmitri appears. Without the Polish and Kromy Forest scenes of the 1872 version, the part is no more than that of discontented monk and introspective fugitive.

John Uhlenhopp, who includes Wagner’s Tristan as one of his more heroic roles, played Shiusky with dignity, although convincing the audience that Boris is correct that the prince is a treacherous opportunist. 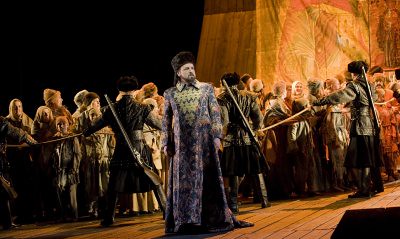 There were many original elements in the stage direction, conceived originally by Winge and enhanced by Pevzner. Grigori, having heard with interest Pimen’s account of Boris’ murder of the Tsarevich Dmitri, when he is alone, tears that page from Pimen’s chronicle. Prince Shiusky, at Boris’ death, hovers over the Tsarevich Fyodor, as the boy cringes.

However, the most striking innovation of the production is the introduction of the Simpleton, who in Mussorgsky’s 1869 version appears only at the midpoint of the opera, into earlier scenes. He carries or has near him a model of a turret with a gold onion dome. During the first act scenes, he is not only present, but provides a focal point at scene changes, moving from his vantage point in the crowd outside the Novodyevichy Monastery to the Kremlin Square for the coronation. He finds his way into the Chudov Monastery and crouches in terror as Pimen describes the death of the tsarevich Dmitri.

Played by Adler Fellow Andrew Bidlack, the Fool is a mute role until his powerful exchange with the Tsar in the St Basil’s scene, which closes with his lament for Russia. Although his expanded role and surreal presence were envisioned neither by Pushkin nor Mussorgsky, he ties these early scenes together in a way that makes the usually interesting St Basil’s scene into especially compelling drama.

[Below: a children’s pilgrimage gathers at St Basil’s Church; the Simpleton (Andrew Bidlack), his totem beside him, is at the right; edited image, based on Terrence McCarthy photograph, courtesy of San Francisco Opera.]

The Geneva-Houston production, now of San Francisco, provides a satisfactory resolution to the dilemma. An opera company should present only the 1869 version or the 1872 version. Never try to mix the two. (Any issues raised by mixing the two versions for the hostess’ role in the scene at the Inn near the Lithuanian Border, noted above, are of no dramatic importance.)

[Below: The Simpleton (Andrew Bidlack) is observed by Prince Shiuski (John Uhlenhopp), to the rear.] 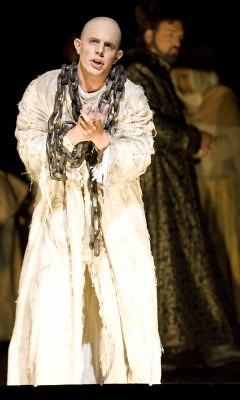 The 1872 “Boris” is unquestionably a masterpiece and such additions as the clock scene, Polish scenes, and Kromy Forest are among Mussorgsky’s most inspired compositions. The 1872 version, however, is much more expensive to produce, requiring two additional principal singers (Marina and Rangoni).

This production, with its effective but economical sets and beautiful costumes designed by Kari Gravkev for the Geneva production, is likely within the reach of regional opera companies that would by necessity bypass the later version.

But the production is a work of art in itself, and a triumphant presentation by the San Francisco Opera. Those able to see the final performances in this series should be pleased with what they see and hear.

[Below: a gathering of the boyars to discuss news of the triumphs of the Grigori Otepyev, claiming the tsar’s throne; edited image, based on a Terrence McCarthy photograph, courtesy of San Francisco Opera.]