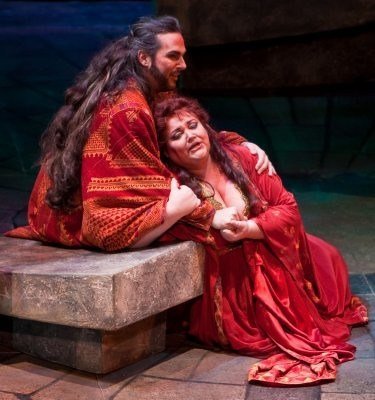 For opening night of the Pittsburgh Opera’s 2008-09 season, Saint-Saens’ “Samson et Dalila” was performed in a “refurbished” production that saw the role debuts of tenor Frank Porretta as Samson and mezzo-soprano Stephanie Blythe as Dalila. It was also the occasion for the stage debut of baritone Kim Josephson (who had sung the role in a concert performance) as the Grand Priest of Dagon. Virtually all of the smaller parts were role debuts as well.

[Below: the finale of the Pittsburgh production of “Samson et Dalila”; edited image, based on David Bachman photograph, courtesy of Pittsburgh Opera.  All images on this page are based on photographs copyrighted 2008 by Bachman.]

The production was conceived as a vehicle for Blythe to perform her first set of Dalilas. It proved to be a triumphant evening at the Benedum Center, home of the Pittsburgh Opera, for her and for anyone who revels in the power and range of a mature mezzo-soprano of the first rank.

It was an opportunistic debut for Porretta, who is singing in Pittsburgh for the first time. Although in recent years he has taken on increasingly heavy roles, he had stepped into the Pittsburgh assignment only eight weeks before opening night after the unexpected death of the originally announced Samson, Mark Lundberg.

Porretta, who is described as a lyrico spinto tenor is not the tenore di forza that some expect in this role, but he did display evidence of a mastery of the French heroic tenor style and was a pleasing Samson. In 1966, I had seen a Frank Porretta perform the role of Wilhelm Meister in Ambroise Thomas’ “Mignon” at the War Memorial Opera House, the most recent time that this former staple of the French repertoire was mounted by the San Francisco Opera. The “Mignon” Frank Porretta, however, was the father of Pittsburgh’s Samson, and it seems obvious that the latter was raised with an appreciation of French styles of singing.

Josephson, also debuting in Pittsburgh, proved to be an effective Grand Priest. All of the remaining roles occur only in the first act, and all can be said to have met the expectations of the parts – especially Harry Dworchak, the Abimelech, and Liam Moran, the Old Hebrew.

[Below: Dalila (Stephanie Blythe) and Samson (Frank Porretta) with a dancer; edited image, based on David Bachman photograph, courtesy of Pittsburgh Opera.] 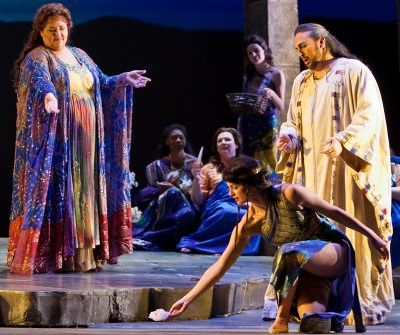 The company considered creating a new production of the opera from scratch, but in time decided to purchase and recondition a production previously co-owned by Memphis Opera and the Hawaii Opera Theater.

The production is a unit set consisting of a raised circular area that serves as the base for every scene. This base is ornamented by the exterior of the Philistines’ temple in Act I, the tent in which Dalila dwells (amidst palm trees) in Act II. Act III’s two scenes feature the millstone that the blind Samson must turn, and then the interior of Dagon’s temple.

Sky scenes are projected on the back rear of the stage for the first and second acts, including the second act storm. The projections gave the feel of having been developed separately from the sets, but one imagines that, in future revivals of this production, the designer of the projections might fine-tune them to give the production a more seamless look.

The great theatrical event in any production of “Samson” is the destruction of the temple of Dagon to end the opera. The Pittsburgh production had enough of a “wow” factor to please its audiences.

[Below: Dalila (Stephanie Blythe) implores Samson (Frank Porretta) to reveal to her the secret of his strength; edited image, based on David Bachman photograph, courtesy of Pittsburgh Opera.] 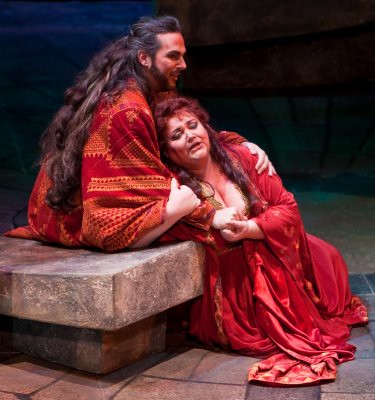 “Samson” has two dance sequences, including the celebrated third act Bacchanale. Pittsburgh Opera demonstrated that with as few as 11 dancers, in this instance from a community-based dance troupe, the Pittsburgh Attack Theatre, it is possible to keep the audience’s interest.

The choreography was not quite the randy Venusberg of the Los Angeles Opera production of Wagner’s “Tannhauser” (whose review may be found on this website), but the dancers clearly intended to suggest a wide range of sexual experiences were taking place within the temple’s celebrations.

[Below: Dancers from Pittsburgh’s Attack Theatre perform the Bacchanale; edited image, based on a David Bachman photograph, courtesy of Pittsburgh Opera.] 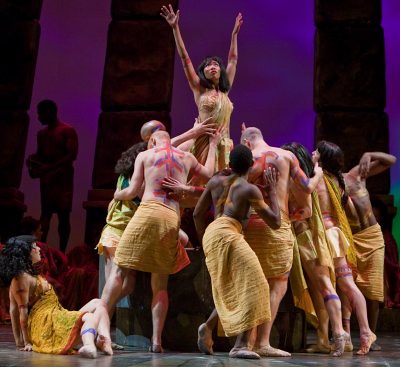 The stage direction by Stephen Pickover was traditional, with relatively little effort to go beyond the basic blocking of the stage positions of principals and chorus. I miss the many touches of Sandra Bernhard’s directing in last fall’s production of the opera in San Francisco, that suggested the terror and attraction that both the Philistines and the Israelites felt for one another.

On at least one point, though, I prefer Pickover’s concept. Just before the opera’s end, Samson whispers to the young boy who leads him to the load-bearing columns, and, being the only person forewarned of what is to happen, the boy runs out of the temple.

Anyone who appreciates great operatic singing, who is able to attend one of the three remaining performances of the work in Pittsburgh, should consider experiencing Stephanie Blythe’s bravura performance of Dalila.  With the added attractions of masterful conducting by French opera enthusiast Antony Walker, and commendable performances by Porretta and Josephson, Saint-Saens’ exotic music is a treat.

[Below: What’s the worst that can happen? A blinded and humiliated Samson (Frank Porretta) places himself between the Temple of Dagon’s load-bearing pillars; edited image, based on David Bachman photograph, courtesy of Pittsburgh Opera.] 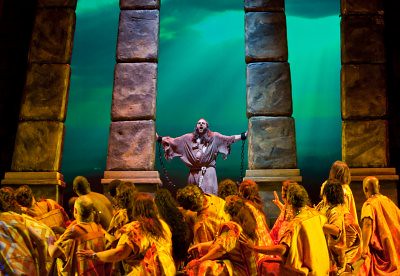